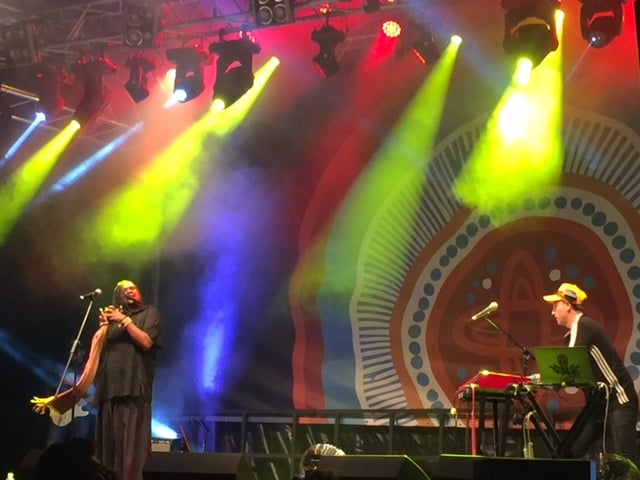 The Electric Fields, performing at #Apology10 concert in Canberra

Introduction by Croakey: In a previous article marking the 10th anniversary of the National Apology to Stolen Generations, the Healing Foundation’s CEO Richard Weston wrote that anniversaries are a good time for reflection.

He hoped the momentum surrounding the anniversary on 13 February would lead to a serious commitment to tackling unresolved and intergenerational trauma in Aboriginal and Torres Strait Islander communities.

Now, reflecting back on the landmark anniversary and associated community events held across Australia, Weston suggests an important change is underway in public consciousness.

“The recent shift in public sentiment towards greater understanding and respect gives me great hope that a better future, where our Stolen Generations members and their families are supported to heal, and have their needs met especially as they age, is within reach,” he writes below.

See beneath his article for photos and interviews from events marking the anniversary in Mittagong, NSW – as well as details of the Annual Koori Flagraising and Mirror Flash to Katoomba happening this Saturday afternoon at nin garang thurree currobung, Gibbergunyah Reserve, in the Southern Highlands of NSW.

The 10th anniversary of the Apology to the Stolen Generations, commemorated in the nation’s parliament and communities throughout the country, marked a significant shift in the public narrative about this harrowing chapter in Australia’s history.

As I talk to people from all backgrounds and walks of life – from our political and thought leaders to my neighbours – about the Stolen Generations, it is clear the tone is changing.

Awareness has palpably increased about what happened to the Stolen Generations children, the way their forced removal affected their families and communities, and the way the resulting trauma continues to impact Aboriginal and Torres Strait Islander people today.

In their place, the voices and stories of Stolen Generations members themselves – and more recently their children and grandchildren – are shining through, giving many everyday Australians their first real insight into a policy that has directly affected the many Aboriginal and Torres Strait Islander people in Australia today.

The term intergenerational trauma, or the unresolved trauma that can be passed from one generation to the next, often unknowingly, has entered the national dialogue in a big way.

More and more people of influence are encouraging non-Indigenous Australians to consider how they would be affected if their children were forcibly removed from them, or if as a child they had been taken from their loving family against their will and raised in an institution or adopted out.

Many Australians, including our political leaders, are now attempting to put themselves in the shoes of families affected by the Stolen Generations policies.

In addition to trauma and grief and its many physical and psychological impacts, the Stolen Generations policies have created many related issues including poverty, as a result of many Stolen Generations children being denied education and other opportunities.

While many Australians may struggle to find the money to cover the costs of a loved one’s funeral, it can be that much harder for those who were sent out to work as teenagers instead of having the opportunity to complete high school, and never had anything handed down to them by their parents or extended family because their family was ripped apart.

As Stolen Generations members age and need to consider obtaining additional support or moving into an aged care facility, there are additional challenges to grapple with, to ensure these experiences do not trigger trauma, especially for those institutionalised as children.

In the lead up to the Apology anniversary, Opposition Leader Bill Shorten announced a Labor government would introduce a reparations scheme, along with a funeral fund, for Stolen Generations members not covered by state schemes.

In recognition of the intergenerational impacts of forced removal, a $10 million “National Healing Fund” was also announced to support healing for Stolen Generations members and their families.

Last year, following a high profile push to implement outstanding recommendations of the Bringing them Home report, the Federal Government funded a number of measures related to the Stolen Generations.

This includes Australia’s first thorough study of their current needs, which will give us a framework for looking at issues like aged care requirements, national reparations, and healing on a larger scale, for individuals, families and communities.

Both parties’ initiatives are sorely needed, along with a truly national reparations scheme that covers Stolen Generations members and families in every state, and a comprehensive strategy to tackle intergenerational trauma, among other priorities.

Each year on February 13, the anniversary of the Apology reminds Australians what really happened to the Stolen Generations, and how this was publicly acknowledged by our national parliament in 2008. This acknowledgement and truth telling is a critical part of healing.

To celebrate our Stolen Generations members, increase understanding about their healing needs and raise awareness about the importance of acknowledging and addressing the effects of intergenerational trauma, this February the Healing Foundation supported 87 Apology anniversary events throughout the country.

Approximately 16,000 people attended the events in urban, regional and remote locations, which were run by organisations including schools, Aboriginal organisations, neighbourhood centres, councils, health and legal services and a healing centre.

In Adelaide, ten organisations came together to plan a special day for Stolen Generations members. A learning trail was set up to raise awareness of the history, anguish and suffering of the Stolen Generations, the effects on their social and emotional wellbeing and that of the generations that have followed. A coolamon was also on display to symbolise a cradle and a Mother’s arms left empty after the removal of her children. People had the opportunity to place gum leaves in the coolamon as a symbol of healing and cleansing.

In Kingston south of Brisbane, hundreds of people braved torrential rain to honour the Stolen Generations and commemorate the tenth anniversary of the Apology. Following a Welcome to Country, local Aboriginal and Torres Strait Islander students performed an Apology dance and read out poems written especially for the anniversary before Sharron Lindh, who created the Early Years Count campaign song, performed a Stolen Generations song she had written.

Local politicians and councillors then read out the Apology in unison before Archie Roach addressed the crowd and performed a number of songs including “Took the Children Away”.

In NSW, Thou-Walla Family Centre and Irrawang Public School marked the anniversary by celebrating the story of local Elder Aunty Margo and the great knowledge she has passed on to the school, at a special assembly.

Along with Aunty Margo, two other Elders, Aunty Mary and Aunty Jude, also shared their stories before the first official screening of Aunty Margo’s story in a short film clip, and a shared meal. The event was attended by around 250 people, including students and their families and other schools.

The Healing Foundation also arranged for ‘Apology10’ to be written in the sky over Melbourne, Sydney and Canberra and for #Apology10 flags to be placed in prominent locations in Melbourne, Sydney, and Canberra. Brisbane’s Story and Victoria bridges were also lit up by the city council to mark the anniversary.

Commemorating the Apology anniversary helps to build awareness about the truth of the Stolen Generations period and the way it continues to impact on Aboriginal and Torres Strait Islander people, which is essential to healing past wrongs and building a better future.

The recent shift in public sentiment towards greater understanding and respect gives me great hope that a better future, where our Stolen Generations members and their families are supported to heal, and have their needs met especially as they age, is within reach.

• Richard Weston, a Meriam man who was born on Gadigal country and grew up on Noongar Boodja and is now on Ngunnawal Country, is CEO of the Healing Foundation. Follow on Twitter: @RichJWeston

On 10 February 2018, a smoking ceremony was held at the Aboriginal Cultural & Community Centre on Gundungurra country at Mittagong, NSW, to commemorate the anniversary. The event was held with the support of the Healing Foundation. 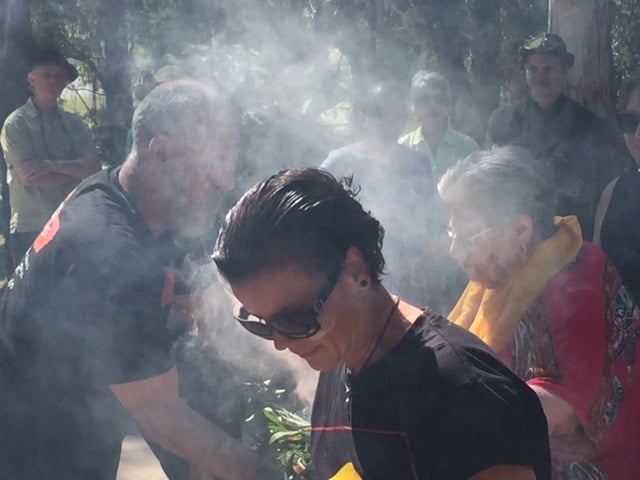 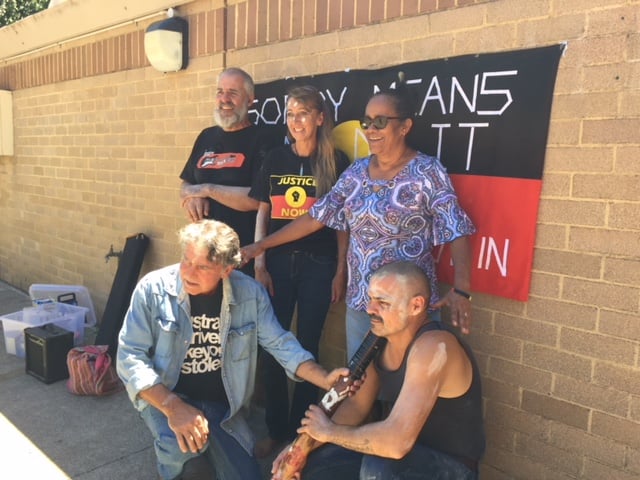 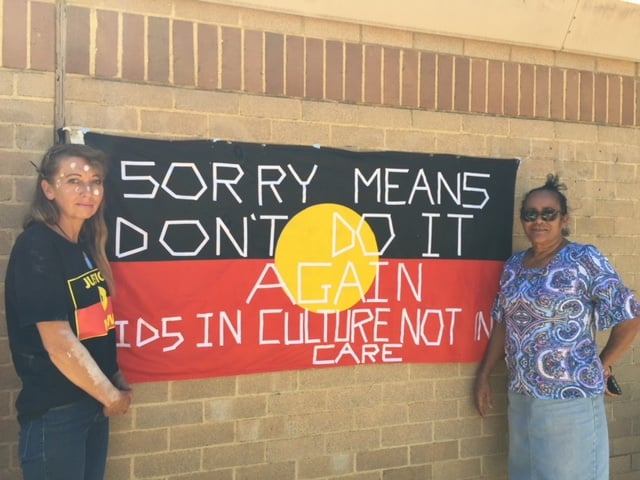 Watch interviews with Trish Levett, a Gundungurra Elder (above left), and Yuin woman Aunty Wendy Lotter (above right) reflecting upon the significance of the anniversary.

The photo below is from a previous event, with Murri poet/playwright Burraga Gutya (Ken Canning) flashing the mirror. 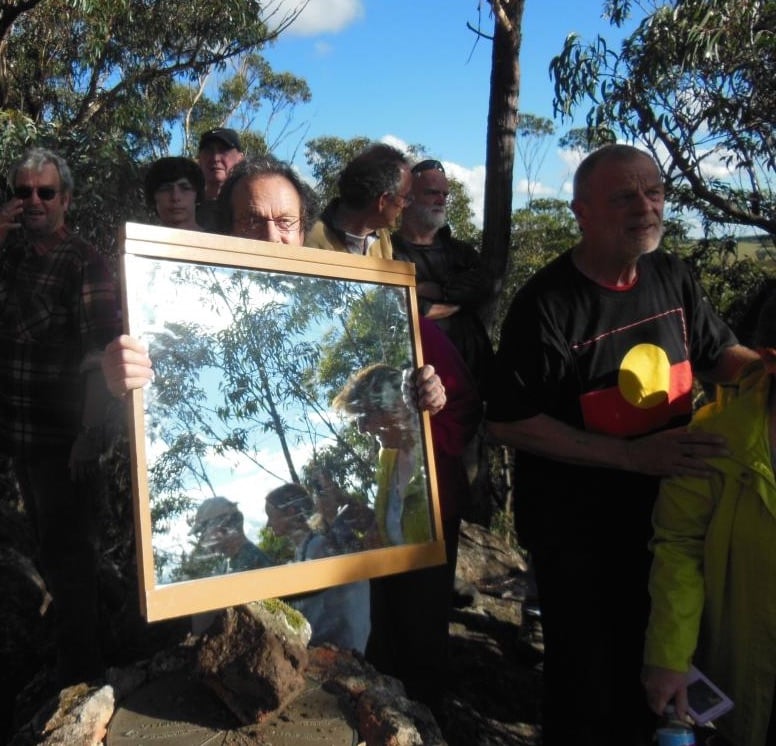