MATES in Construction – harnessing the mateship culture to prevent suicide

Among the usual crowd of public health professionals, doctors and academics was John Brady, a former construction worker and small business owner, whose organisation MATES in Construction won the organisation award for Community Engagement. 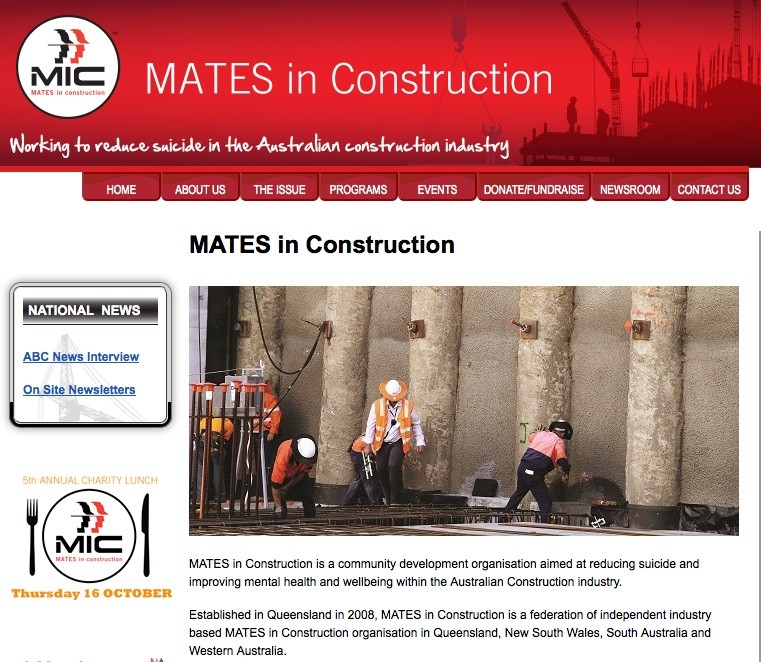 MATES in Construction is a community-based capacity-building organisation that seeks to address the elevated rates of suicide among construction workers.

Deaths by suicide in the construction industry outnumber deaths by work place accident, yet while safety is entrenched into the culture of construction sites and industry, mental health is not.

Brady speculates that there is no one factor that drives up the rate of suicide, but rather that it is a combination of factors.

“Typically it’s relationship break ups, they’re the one that can push people over the edge, but it can also be finances, it can be the itinerant nature of work, sometimes it’s bullying of young workers, it can be using alcohol and drugs, it can be isolation,” he says.

“Some of the guys working out in the resources projects, they’re 27 hours away from home doing 12 hour days, so they’re removed from their support structures, which can make them lonely and aggressive.”

MATES works by visiting sites, giving information about mental health and asking for volunteers to act on work sites as connectors between workers who are doing it tough and agencies that are able to help them.

“Sometimes they just need reminding that they can do it, or a little bit of scaffolding to say, we’ll help, but you have do it.”

MATES has been successful in changing the culture of construction work sites and the industry in general to be more open to sacrificing some productivity in order to look after their workforce.

“When we started, we were like leprosy, nobody wanted to touch us,” Brady says.

“Construction is about building, and if you take people off the line, that’s an expense, and there are massive penalties for finishing over time. To convince a site to give us all their guys for a period of time has been a challenge, but we work with companies to find ways around that.”

There is a commonly held view in the construction industry, much as there is in the broader community, that poor mental health and mental illness is a sign of weakness. Construction is an industry dominated by men and a masculine culture in which seeking help and discussing problems and feelings is forbidden.

However, this belies a side of the construction industry that is, in fact, caring and self-sacrificing. Brady says:

“Some companies don’t see that suicide is their issue. There’s a mentality that if you suicide, you’re a soft cock.

One of the really strong positive things in Australian culture is mateship. We’ll do anything for a mate. The construction industry is such a magnificent community for helping others.

If they’ve got a guy struggling, who’s lost his wife, they’ll go around, they’ll drop the kids off at school, they’ll mow the lawns, they’ll paint the house, they’ll have fundraisers. They’re a tremendous community like that, but they often get bad press. They are by nature people who will look after their mates.

“So we’re saying, what we’re already doing, let’s use it to make sure our mates don’t kill themselves.”

Throughout the National Suicide Prevention Conference, a recurring theme was being able to quantify the work of suicide prevention programs and organisations in order to justify funding or entice workplaces to collaborate with organisations.

This was often done by attaching a dollar value to a death by suicide by totalling the financial impact of someone suddenly dying and leaving a large impact on their community and workplace.

However, numerous speakers at the conference found that if they were able to speak to someone at a business who had experienced suicide, such arguments were often not necessary. Brady agrees.

“What we find is, when you come across someone who has been touched by suicide, they know the ripple effect of it, and they know the pain,” he says.

“They know that if they have a suicide on site, the whole site’s going to close down anyway. They’re going to lose thousands of dollars, so getting us on site and doing it preventatively is actually good business.”

“We have a problem”

The pivotal strength of MATES is that it’s an organisation that is rooted in the construction industry. They know what kind of voices will be ignored by construction workers and what kind will be listened to, and they know how to fit seamlessly into a workplace. They model their programs on systems in the workplace and work them into already-existing safety protocols.

“We make sure our guys are dressed like their guys, we make certain our language is inclusive. It’s, ‘we have a problem’, not ‘you have a problem, and I’m here to help’,” he says.

“The stuff we do is fairly brutally honest. The construction industry has fairly sensitive bullshit detectors, and if you go in there with a message that is nonsense or high falutin’ clinical stuff, they just wipe you.”

• More details about the awards are here.

• More reading about one of the award winners, Professor Graham Martin, in this article by Jaelea Skehan, Director of the Hunter Institute  of Mental Health, who reflected on his role in her own career development as well as the field more broadly. She writes:

“Graham is the person who says what everyone else in the room is thinking but perhaps doesn’t have the courage or eloquence to say. He is committed to translating research into practice and he has always reminded us to keep ‘people’ at the centre of what we do….”

Martin was not able to be present at the awards, but an email from him was read out. An extract follows.

“The transverse myelitis of my spinal cord continues to leave me quite handicapped, even after nearly 5 years. The myriad symptoms make life difficult and unpredictable and I have given up travelling and conferences in favour of writing lots of books.

I am sorry not to have contributed to your process but after 35 years of heading up conferences, 30 years of suicide prevention research, and 20 years of racing around being on national and numerous other committees, generally pretending to be important and “believing we were getting somewhere, I believe now that we have been somewhat defeated by bureaucratic process at all levels, and the massive resistance to evaluating our own work.

My preference is to write as much as I can in the next few years, goading the field to evaluate, and shifting the focus to actual intervention programs, rather than arguing about minutiae, and organising more committees to discuss it all. That may sound jaded, but I hasten to assure people I am not. I remain dedicated to suicide prevention, and am likely to remain so.”

PrevPrevious“Primary care leadership needs to wake up and start a revolution.”
NextAHCRA Communique highlights the role of primary health careNext