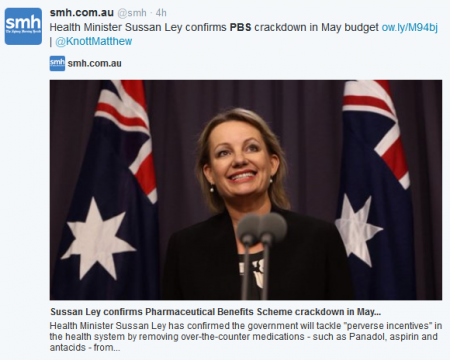 Health Minister Sussan Ley has confirmed the Federal Government is looking at removing subsidies from over-the-counter medicines like paracetamol, aspirin, and antacids that can be bought without a prescription and allowing pharmacies to discount the patient co-payment as part of negotiations over the Community Pharmacy Agreement. See her weekend announcement of the review of the Pharmaceutical Benefits Advisory Committee’s (PBAC) submission guidelines. Outlining the moves, the Australian Financial Review reports that Ley has been told to find $3 billion of savings from the PBS over four years and up to $7 billion across the health portfolio in the lead up to the May 12 budget.

This follows the Minister’s big announcement last week of the review of the Medicare Benefits Schedule – to be led by Sydney Medical School Dean Professor Bruce Robinson and to scrutinise more than 5500 services listed – and appointment of former president of the Australian Medical Association (AMA) Dr Steve Hambleton to head a Primary Health Care Advisory Group to recommend improvements in providing care, particularly for patients with mental health problems and chronic and complex illnesses.

Also on the weekend, Fairfax media reported that the Therapeutic Goods Administration’s Advisory Committee on Medicines Scheduling is looking at making about 150 codeine products like Nurofen Plus and Panadeine prescription-only medicines, meaning they could no longer be freely purchased over the counter at pharmacies.

The PBS and MBS reviews have been largely welcomed, though with the caveat that they should not be just about cost savings. But there are ongoing concerns about inequity, particularly with the Minister talking about “perverse incentives” for patients “to go to the doctor excessively so they could hit the safety net and access over-the-counter medications for free.” The AMA says it wants to be sure that, in any changes, “the most vulnerable groups are protected”. 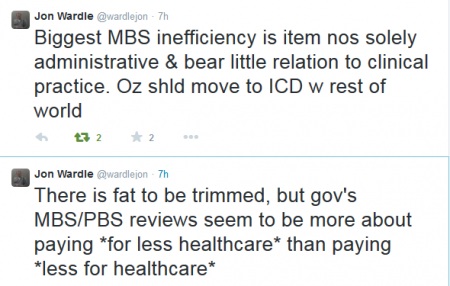 Opposition health spokeswoman Catherine King has welcomed both MBS and PBS reviews, but says any savings achieved in the MBS review must go back into the health system.

In her post below, which comes from a speech to the General Practice Registrars Australia forum on ‘The Future of General Practice 2015’ in Melbourne last week, she says evaluation of the MBS could be considered in the context of the Choosing Wisely initiative, which is to be launched in Australia on Wednesday. See previous Croakey posts on the initiative.

In the post King also discusses the potential of the concept of the Patient Centered Medical Home, which she says has been a focus of Labor’s discussions with the medical profession.

Under this structure, GPs and their practices would deliver a broad range of services, providing continuous care for their patients and reducing the need for expensive hospital treatment.

The plan includes features such as complexity payments to fill gaps where services are lacking, and voluntary patient enrolment so patients can enrol with a specific practice and a preferred GP.

The RACGP refers to this as giving patients a “Medical Home” that will help GPs tailor services to their community.

The concept of the Patient Centered Medical Home is increasingly being adopted overseas and is an idea Labor has been actively exploring in our discussions with the medical profession.

The idea has been around since the 1960s, and originated among paediatricians caring for children with chronic illness.

A uniquely Australian model would – I believe – be very different from what is available in New Zealand or the United States, and those are details ultimately to be advised by GPs who can best design the system that supports the central care coordination role, care planning and liaison with other health professions.

For the most part, this is not radically different from what happens as a matter of course in many practices – the lifelong journey of the GP looking after, and managing and coordinating the care of their patients.

The central question as part of this discussion today is how a GP’s time can best be used.

There is already a very successful version of this scheme operating in Australia through the Department of Veterans Affairs with its Coordinated Veterans Care (CVC) Program.

Through this program the Department provides support to GPs to provide comprehensive planned and coordinated care to eligible veterans with the support of a practice nurse or community nurse.

This program takes a proactive interactive approach to the management of chronic and complex diseases, including regular follow-up to see how patients are going without relying on the patient returning to the surgery.

Another version of this is the diabetes management plans many doctors run, in conjunction with state governments, for people at risk of developing Type 2 Diabetes.

These programs again don’t wait for the patient to turn up at the surgery with a problem, but provide structured care such as regular blood sugar level testing, and podiatry to check for any signs of problems with fingers and toes.

For a very modest investment, this sort of proactive care heads off the potentially catastrophic health costs that can come with a patient becoming a diabetic.

These are just 2 examples of co-ordinated care, and there is obviously great scope for rolling out this type of pro-active approach more broadly.

I was interested to note that the report of the national review of mental health programs recommended the staged implementation of medical homes for mental health – and recognised the need to better support the important role of GPs in the assessment, triaging and management of mental illness.

The medical home approach means that the patient is seen as a whole person – very important when so many have multiple co-morbidities, including mental health problems.

It also offers the possibility, through voluntary enrolment or registration, that a practice knows the burden of illness in the community where it operates and is provided with the appropriate resources to manage that.

In this context it is also very important that we get value across the MBS.

This is a reform Labor commenced in government that was helping to keep Medicare sustainable and pay for the modernisation of Medicare.

While many medical procedures are now done much faster and with different technology, many prices remain unchanged from the rate set when the procedure was first added to the schedule. Given that clinical services, and the biomedical and comparative effectiveness research that underpins them, change over time, it makes medical and financial sense to regularly review them.

The work initiated by Labor continues to realise significant savings to this day. One such example has been recent changes to vitamin D testing.

This is a small and arguably insignificant change but one that will likely save hundreds of millions of dollars on the MBS.

More broadly, evaluation of the MBS could be considered in the context of the Choosing Wisely initiative, established in Philadelphia that has expanded to 12 countries and is soon to be launched in Australia by NPS MedicineWise.

Peak medical colleges and consumer groups will collaborate in this national initiative to identify tests, treatments and procedures that are commonly used but can often provide no or limited benefit to the patient and in some cases, lead to harm.

Lists of tests, treatments and procedures that should be considered or questioned will be developed by participating medical colleges and societies.

This is good, and smart health reform, based on evidence, quality and safety in healthcare. It is not about rationing healthcare but ensuring informed decisions on the part of both doctors and patients about the best approaches.

From Labor’s perspective these are savings that should be reinvested back into Medicare to fund reforms, to list new technologies on the MBS, new pharmaceuticals, including cancer drugs and to properly reward general practice and integrate care.