What a difference a few months and a few outraged submissions from consumer groups can make! The Final Report of the McKeon Review into Health and Medical Research (HMR) is a very different beast from the Consultation Paper circulated for comment last October, at least in its recognition of the role of consumers in the HMR sector. Consumers barely rated a footnote in this initial draft, whereas in the final report they have been elevated to a position of, if not partnership with researchers, then at least junior associates.

To its credit, the Review Team took on board the strongly expressed feelings of the consumer sector when the consultation paper was released and incorporated many of these in the Final Report. Drawing on the content of these submissions, in particular that of the Consumers Health Forum, the Report makes a number of recommendations highlighting the important role of consumers and the community in the HMR sector.

Importantly, consumers have now been included as part of the ‘vision’ of the Review, with an acknowledgement in a number of places that the ultimate goal of HMR is to improve the health of the community. It may seem like an obvious or even facile point however it was noticeably absent from the consultation paper which appeared to present HMR as an end in itself, independent of any impact it has on the community.

Among the improvements in the Final Report include support for a strengthened role for consumers in the HMR sector and an identification of areas in which this can occur, including:

These are all important roles and the Report does highlight why consumer involvement in all these areas leads to better quality research and improved outcomes.

However, Croakey still found a number of points to take issue with in the Final Report – perhaps unfairly and possibly due to the residual outrage Croakey is still harbouring from the treatment of consumers in the consultation paper.

For example, while consumers and the community have been given a much higher profile in the Final Report they are still treated as just one in a (long) list of stakeholders who are involved in the HMR sector. Their unique position as both the funders (through taxes, donations and other mechanisms) and beneficiaries of HMR is not recognised nor is their fundamental role in determining the underlying values and principles to guide the implementation of Australians HMR agenda.

In a number of places it seems as if the Review Team have simply tacked ‘consumers’ onto its already determined framework to appease some advocacy groups without assessing what consumer engagement really means to the sector as a whole.

To illustrate see the following diagram that appeared in the Consultation Paper representing the ‘vision’ for the Review. 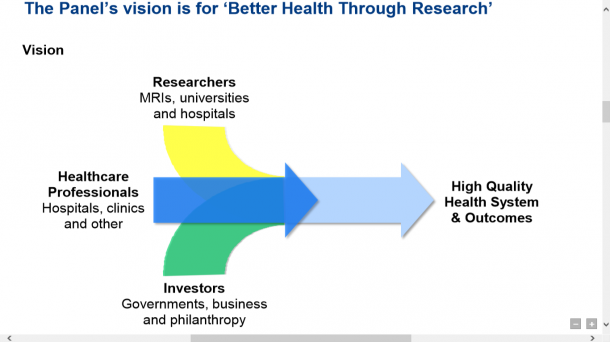 Consumers are completely absent from this vision which includes only ‘health professionals’, ‘researchers’ and ‘investors’. In the Final Report this diagram has been replaced by the following: 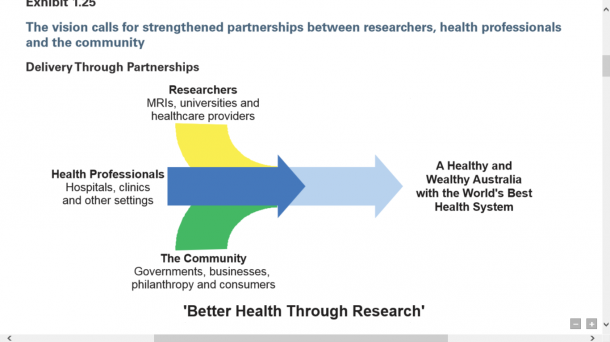 In this version the diagram remains exactly the same with the category of ‘investors’ replaced by ‘the Community’ which includes the same stakeholders from the original version, with the addition of consumers.

Croakey does not wish to be overly cynical but examples such as this do raise questions about how seriously the Review Team takes consumer engagement in research – enough to change a few words but perhaps not enough to re-draft a diagram? Another disappointing aspect of the report is its failure to respond to the specific recommendations from the consumer sector for practical measures to support consumer engagement in HMR, for example for the establishment of a Consumer Health Research Centre.

However, these points aside, it is fair to say that the Final Report is light years ahead of the Consultation Report in its acknowledgement of the importance of consumers to HMR. As always, the implementation of the recommendations will be crucial in determining their effectiveness – on the positive side there is enough there to justify a substantial role for consumers in HMR in the future. On the negative side, this probably won’t occur without ongoing advocacy and continued efforts from consumers and consumer groups to ensure that the Report results in improved consumer engagement practices and a stronger and more productive HMR sector.