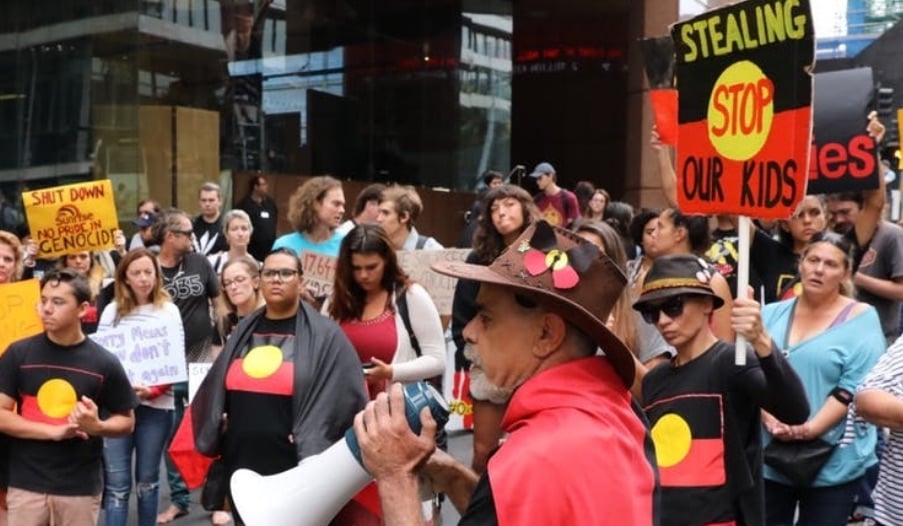 Protestors rally outside Channel 7 studios in Sydney. Image via The Conversation, AAP/Crowdspark

In March this year, Sunrise aired a panel discussion about the removal of Indigenous children from dangerous or abusive family situations.

It wrongly claimed that Indigenous children could not be fostered by non-Indigenous families and one panellist, commentator Prue MacSween, suggested that the Stolen Generation might need to be repeated in order to save children from physical and sexual abuse.

The reaction was swift and fierce: the segment was condemned as racist and insensitive, with many questioning why the panel featured no experts or Indigenous people. There were protests at the show’s Sydney studio, and multiple complaints were made to the Australian Communications and Media Authority.

This week, ACMA announced that the Channel Seven breakfast show did indeed breach the Commercial Television Industry Code of Practice in airing false claims that Indigenous children could not be placed with white families.

It was also found that the segment provoked “serious contempt on the basis of race in breach of the Code as it contained strong negative generalisations about Indigenous people as a group”.

Seven has defended their actions, labelling the ACMA’s decision as “censorship” and “a direct assault on the workings of an independent media”. They are also considering seeking a judicial review of the decision.

However, it is not correct to assess ACMA’s decision, nor its role, as censorship. Rather, the ACMA monitors and enforces basic journalistic principles governing ethics and responsibility.

The decision is more symbolic than material – Channel Seven will not be forced to pull the segment from online; indeed, it is widely available. ACMA also has no power to order any compensation to be paid to a wronged party or fine the broadcaster; nor can it force Channel Seven to apologise or correct its error.

This dispute is but one of many examples that raises questions over the power of the media and what happens when media make a mistake, deliberately bend the truth or publish information that may cause harm to people, especially from marginalised groups.

In his research on the media portrayal of Indigenous people and issues, and the difference between sensitivity versus censorship, Michael Meadows argues the media are resistant to admitting there is a problem with racist or insensitive coverage. He writes:

Aboriginal Australians have had to be content with a portrayal which is mostly stereotypical, sensational, emotional or exotic, with an ignorance of the historical and political context in which these images are situated.”

While “censorship” is a label that is often used by the media in response to criticism, actual censorship in Australia by government or media watchdogs is thankfully rare to nonexistent. Other issue such as defamation law are greater sources of censorship.

In a 2018 report released by Reporters Without Borders, a worldwide organisation that advocates for a free press, Australia ranked 19th out of 180 countries on press freedom. This was a fall from ninth in 2017 due to of media restrictions on reporting on asylum seekers and refugees in offshore detention centres, not the role of ACMA. In fact, ACMA and the Australian Press Council were not even mentioned.

Australian journalists are expected, although not obliged, to abide by the Media, Entertainment and Arts Alliance’s Code of Ethics. This states that journalists should “report and interpret honestly, striving for accuracy, fairness and disclosure of all essential facts” and to “do your utmost to achieve fair correction of errors”.

ACMA’s finding on the Sunrise segment that featured sweeping claims such as “children left in Indigenous families would be abused and neglected”, is simply holding those responsible to the minimum standards expected, not just within the industry, but from the public, too.

In the era of “fake news”, it is not surprising that the public’s trust in journalists is low; a 2018 survey found only 20% of Australians deemed newspaper journalists as being “very” honest and ethical, with television reporters fairing even worse, at 17%.

The ACMA was created in 2005 following the public outcry over the infamous “cash for comment” scandals in 1999 and 2004. At the time, the then-Australian Broadcasting Authority was criticised for being “too soft” and ineffective in response, the ABA was abolished and replaced by the ACMA.

It’s incorrect to label the ACMA’s role as playing “censor” when they do no such thing. In fact, there is criticism that ACMA, like its predecessor, is a “toothless tiger” that lacks any power to actually hold the media to account.

No media can operate without a basic framework that places public interest, a commitment to accuracy and responsibility to the public.

Broadcasters can, of course, discuss matters of public interest, including extremely sensitive topics such as child abuse in Indigenous communities. However, such matters should be discussed with care, with editorial framing to ensure compliance with the Code.

With “clickbait” and inflammatory opinion increasingly finding a home in the media, it’s more important than ever that the media respect and abide by their responsibilities to fairness and the truth. And when they cannot or do not do this, regulatory bodies such as the ACMA are essential.”

• Alana Schetzer is a lecturer and tutor at The University of Melbourne and RMIT, in media, writing and communication

PrevPreviousSave the date! 13 October for a #CroakeyGO and #CroakeyPopUp in Sydney
NextOn World Suicide Prevention Day, calls for the Federal Government to invest in Indigenous suicide preventionNext