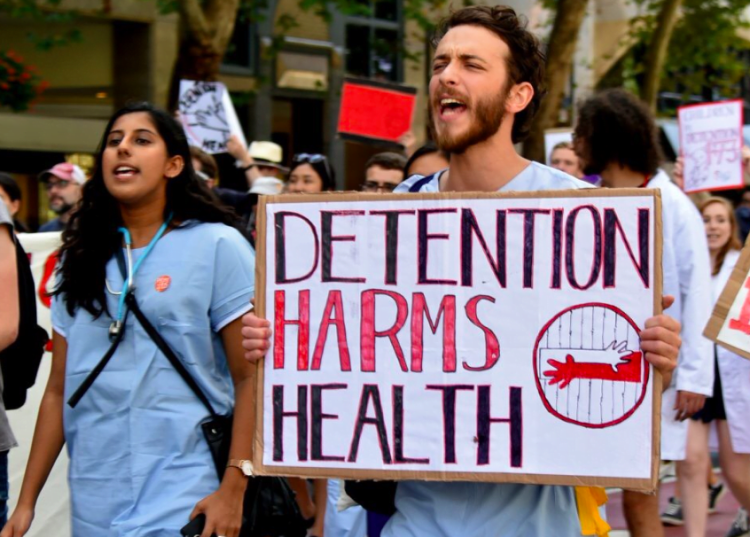 From the Detention Harms Health March. Photos in this post from: Rhonda Ung

Leading medical groups have added to calls urging the Australian Government to bring an Afghan refugee with advanced lung cancer from Nauru to Australia for palliative care.

Nearly 2,000 doctors have now signed a petition launched at the weekend by Sydney GP Sara Townend who was outraged “by the lack of humanity on display” by the Australian Government after reading reports by Guardian Australia about the plight of the 63-year-old Hazara refugee, known as Ali.

“He has advanced lung cancer. He needs significant palliative care services that he cannot receive on the island. This is not in dispute,” AMA President Dr Tony Bartone said.

Bartone rejected the Australian Border Force’s defence that it had offered to transfer him to Taiwan, saying “this is not an appropriate management option”.

” There is no Hazara community in Taiwan, he has no friends or family there, no-one to translate from his language, and no-one to perform the Shia Muslim rituals after his death.”

The AMA also reiterated its call for the establishment of a transparent, national statutory body of clinical experts, independent of government, with the power to investigate and report to the Parliament on the health and welfare of asylum seekers and refugees in Australian care.

The RACP also urged Ali’s immediate transfer to  Australia for palliative care treatment and “to be allowed dignity and respect at the end of his life”.

“Someone who is suffering from a terminal illness and where treatment is out of the question, should not be held in detention,” RACP President Associate Professor Mark Lane said in a statement.

AMSA, which represents the 17,000 medical students across the country, said Ali’s plight is “the latest chapter in the ongoing and tragic story of the refugees left on Manus and Nauru”. It said:

“To deny someone under the care of the Federal Government the chance to die free from suffering, for no reason other than he was detained for attempting to come to Australia, is unacceptable.

In the article below, Sydney medical student Carrie Lee writes that she sees alarming parallels in Australia’s treatment of refugees in offshore detention centres with the US where more than 2,300 children have been separated from their parents amid a “zero-tolerance” crackdown on illegal immigration.

A young two-year old girl stands in the shadows of tall unidentified men in uniforms as they search her mother, a Honduran refugee.

Her wide eyes and mouth scream with fear, and I can almost hear it. A photographer has captured this moment. The internet, for a moment, explodes with outrage. The former US First Lady  Barbara Bush pens an emotional plea to our humanity.

Her heart breaks with the children ripped from their parents arms at the border. No child should be separated from their parents. Our country should not be in the business of warehousing children in converted box stores or making plans to place them in tent cities in the desert, she writes (to effect). And the world is asked to hold someone, or something accountable.

Disturbing parallels can be drawn between recent zero-tolerance policy enforcement towards refugees and migrants in the US and Australia.

Children are being kept in cages in Texas. The reality is as horrible as it reads on paper. 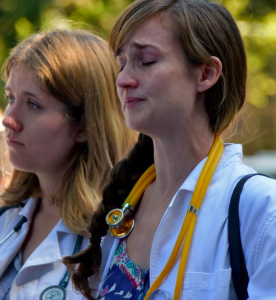 The reality is also that Australia has been doing this for years on Manus Island and Nauru under the guise of trying to doing it for their own good to “stop deaths at sea”. Indeed, the parallels are disturbing. Australia’s own human rights record is smeared with abuses towards refugees and asylum seekers held in mandatory offshore detention facilities.

Although officially these facilities were officially closed in November 2017, refugees are still unsafe on Manus and Nauru – afraid of violence and denied decent medical care – especially since previous health contractor IHMS withdrew services from the islands.

Australian doctors have advocated, pleaded, and petitioned for a 63 year old Hazara refugee Ali on Nauru suffering from terminal lung cancer to be transferred to Australia for palliative treatment. The Australian government has refused their requests despite recommendations by medical professionals on the grounds of his severe disease and the inability to provide adequate care from the basic health facilities on Manus.

Palliative care is the art and science of providing comfort and dignity to people during a time of serious illness. And yet comfort and dignity – as well as fundamental human rights – are precisely what Australia’s offshore detention policies aim to deprive from men, women and children. Already eight refugees have died since detention policies were implemented on Manus and Nauru. In May 2018, a Rohingya refugee man with a known history of seizures and worsening mental health issues committed suicide jumping from a moving vehicle.

Rohingya and Hazara refugees are among the most persecuted minorities in the world. But the Australian government is not in the business of providing compassion to such refugees.

Instead of providing adequate and timely medical care, the government has obstructed the delivery of care and has gone to extreme measures to prevent people from receiving care in Australia.

One of the most extreme consequences was unnecessary delays in emergency evacuation contributing to the death of young Iranian refugee Hamid Kehazaei from a simple cut to the leg that became septic.

Refugees, including Hazara refugee Ali, have been offered financial incentives to return to their country of origin – Ali himself was offered $25,000. However this is not a realistic option at all – returning would likely mean a death sentence for these persecuted individuals.

Today is World Refugee Day. What I want to do is sing from the rooftops stories of triumph and courage and strength about refugees surviving and thriving every day on this little blue planet. But I cannot, because instead I know that there are children being stripped from their parents in fear. Too young to understand what is happening, they will certainly be traumatised long-term by these experiences.

I know that there are children who will be sleeping in Nauru tonight. I know that there are men and women on Manus Island and Nauru suffering from health conditions that they can’t be treated for. And specifically, there is a man named Ali with lung cancer wondering whether he will be able to die with a little piece of dignity that has been denied from him for all the years he has languished in detention for.

I don’t believe we have all become desensitised to tragedies merely as a by-product of their despairing frequency. Disempowered maybe, as we are exposed and re-exposed to similar problems and atrocities as if on repeat.

On some level as seemingly helpless citizens we may feel trapped in some vicious cycle of cruelty perpetrated by our governments .

This in no way diminishes the fact that we know this is wrong. That we know it is horribly wrong to victimise refugees and migrants through policies that seek to disincentivise their movement – as if fleeing persecution is a choice made out of convenience and not survival.

There is no simple fix to this problem. Maybe we can start small – by encouraging tolerance and starting conversations with the people around us. Maybe we can dream big, and use our voices to talk to our politicians about these issues that are increasingly relevant in our global society.

Because these seemingly domestic issues really aren’t that localised at all. They’re happening all over the world. And we need to do our part to speak up and hold someone accountable.

Nearly 2000 doctors have signed this petition by Dr Sara Townend to urge the Department of Home Affairs to transfer Ali to Australia for palliative treatment. Add your signature here: https://doctorsmakechange.org/