*Updated 3 May with response from AMA President Brian Owler and Open Letter from AMPCo to the medical community and on 4 May to clarify number of editorial committee signatories.

Nearly all of the editorial advisors to the Medical Journal of Australia (MJA) have resigned en masse in protest at the sacking of editor-in-chief Professor Stephen Leeder and the outsourcing of editorial and production work to global publishing company Elsevier.

One of Australia’s most respected medical academics, Leeder was sacked last week by the Australasian Medical Publishing Company (AMPCo), a fully owned subsidiary of the Australian Medical Association (AMA), after expressing strong opposition to AMPCo’s decision to outsource production work and its selection of Elsevier for the contract. See the ABC’s story.

Leeder said he had not been consulted about the outsourcing proposal until the bid from Elsevier had been considered by the Board. “I have concerns about outsourcing, and major ethical concerns with Elsevier,” he said.

The MJA’s deputy editor Dr Tania Janusic resigned on Friday and medical editor of MJAInsight publication Ruth Armstrong has also given notice, in protest at the decision to sack Leeder.

Nineteen of the 21 members of the MJA’s Editorial Advisory Committee (see the list of names below) tendered their resignation on Saturday in an email to AMA president Brian Owler and AMPCo chair Richard Alleley. It said:

“As a Committee, we are  concerned about the outsourcing of editorial functions to Elsevier.

Not just this outcome, but also the process of arriving at it, together with past events at the Journal, has every appearance of farce. The Editor-in-Chief has been removed summarily, and the Deputy Editor, approached with a view to becoming the Acting-Editor-in-Chief, has also resigned. We – all of the members of the Editorial Advisory Committee but one — can see no point in continued involvement with this tragedy, particularly as our advice is neither sought nor apparently considered.

The only satisfactory resolution to this untenable situation would be to postpone the decision to proceed with outsourcing editorial functions until a full and transparent discussion had been had with AMA members, and the Editorial Advisory Committee representing clinicians, academic researchers, and educators in Australia. It is clear to us that this is unlikely.

Therefore we regretfully tender our resignations from the Editorial Advisory committee of the Medical Journal of Australia, effective immediately.”

On Sunday Owler emailed the committee members and members of the AMA about the issue, and later issued a media release. He asked the committee members to reconsider their resignations but backed the AMPCo board’s decisions and described as “inaccurate” many of the details published about the circumstances of Leeder’s dismissal. See his message to AMA members in full at the bottom of this post.

AMPCo also published an “Open letter to the medical community”, saying it is “deeply concerned  that  the medical  community  is  receiving  misinformation  about  the  rationale  and  nature  of  the AMPCo Board’s decision (to outsource MJA production functions).” It rejected reports about the way Leeder was treated and defended the selection of Elsevier, saying:

“Prior to engagement the Board discussed all issues raised by the editorial team with Elsevier and is satisfied that the issues were fully addressed. It must also be noted that any criticism of Elsevier was related to editorial content and the company will have no editorial role with the  MJA.”

The news of the committee resignations prompted these tweets (and more at the bottom of this post): Waxman said he was in favour of outsourcing in general, though believed AMPCo had not been transparent enough in its process. However he felt he did not have sufficient information to judge on concerns about Elsevier or the circumstances of Leeder’s dismissal, particularly in the wake of the AMA statement. “In the presence of a lot of unknowns, I don’t think it’s appropriate to resign from an advisory committee that’s very important to the future of the journal.” Zajac said he was in a similar position: “I understand the need for budgetary restraint and have significant respect for Stephen Leeder and so I am keeping an open mind.”

Leeder is an emeritus professor of public health and community medicine at the University of Sydney, and chair of the Western Sydney Local Health District Board. He was appointed editor-in-chief of the MJA, the 101-year old peer-reviewed medical journal, in 2013.

He told Croakey he had been shocked at the way he was sacked. “I thought it was pretty brutal,” he said. “It was the most humiliating professional experience I’ve ever had, I think, being marched up to my office and supervised (while I packed up my desk) and then marched out of the building as if I was a 10 year old with my hands caught in the cookie jar.”

“I’m very sad and bereaved and humiliated,” he said.

“Professor Leeder is a man of outstanding intellect and integrity. We consider that the MJA was extremely fortunate to have the services of an Editor of this calibre and regard his stewardship of the MJA to have been exceptional.”

“The majority, if not all board members, including ourselves have indicated they will resign and believe that the Australian medical community, who we understand have not been consulted will be appropriately outraged.”

Another committee member, Caroline De Costa said there was concern that up to half of the 24 MJA staff members would lose their jobs under the outsourcing proposal, and that the MJA would lose significant local editorial experience and expertise as a result.

The committee also had “ethical concerns” about contracting to Elsevier, in particular around a 2009 scandal when it was discovered to have been paid by the Australian affiliate of Merck to publish the Australasian Journal of Bone and Joint Medicine, without declaration.

As the New York Times reported at the time:

The Merck marketing compilation was unusual in that it looked like an independent peer-reviewed medical journal. It even called itself a “journal,” without indicating in any of the issues that Merck had paid for it.

“That is very worrying,” said de Costa, who is Professor of Obstetrics and Gynaecology at James Cook University College of Medicine in Cairns.

De Costa said the editorial committee wrote earlier this week, expressing their concerns, including that there had been no real consultation over the outsourcing plans with Leeder and that an alternative plan, which would have retained local staff for a similar outlay as would be paid to Elsevier, was not accepted. “We got a very non-committal reply,” she said.

Differences with AMPCo were also blamed for the departure of Leeder’s predecessor, Dr Annette Katelaris.

De Costa said the loss of two editors-in-chief in unhappy circumstances did not augur well for the future and she had been “utterly appalled” to learn how Leeder was sacked and escorted from the MJA office. “I think they would have great difficulty finding someone who wants to put their hand up and be MJA editor now,” she said.

AMPCo released a statement on Wednesday announcing that Leeder would “conclude his tenure” at the MJA “effective immediately”. It said: “Whilst Professor Leeder and the Board remain committed to the Journal, unfortunately we cannot reach agreement on the necessary steps required to ensure its future success.”

Last month Elsevier Medical Communications announced it had signed a collaborative agreement with AMPCo on medical advertising sales, effective from April 1, 2015, under which AMPCo will be responsible for advertising sales in a range of medical journals and newspapers published by Elsevier (click on image below for titles).

An AMPCo spokesperson, contacted via the company’s PR agency, responded to the editorial committee’s concerns with the following:

“It was after considerable due diligence that the Board resolved to outsource sub-editing, production and some administration functions of the MJA to Elsevier to ensure the continued success of the journal.  Any queries that were put to the Board about Elsevier were completely and comprehensively addressed to the full satisfaction of the Board. ”

“In addition, the MJA Editor and AMPCo will remain editorially independent. AMPCo is responsible for content acquisition, direction, development and review. The proposed agreement from Elsevier is to provide fee-for-service in sub-editing, proof reading and typesetting only on AMPCo’s behalf. The final approval for print rests with MJA staff.”

“Editorial independence, content development and discretion will remain with the editorial team in the Australasian Medical Publishing Company (AMPCo) ensuring, contributors, readers and other key stakeholders that today’s exacting quality and integrity standards remain the hallmarks of this prestigious Journal well into the future. The responsibility for the content of the Journal will remain with the in-house editorial team and distinguished contributors. ”

“In order to allow the MJA to continue to respond to evolving events in Australia, Elsevier has arranged for copy editing and layout for sections of the journal requiring flexible timescales to be handled locally within Australia. We believe that this, combined with the flexible availability of skilled native English speaking copy editors around the world (who effectively extend the hours of operation due to the time differences), will provide the capacity required to fit with MJA timelines. In addition, it is our understanding there will be back-up support provided by AMPCo for these last minute changes.”

Asked what impact the mass resignation of MJA’s editorial advisory committee would have on the operation and reputation of the MJA, the spokesperson said:

“We are confident that the Medical Journal of Australia will remain the leading provider of Australian clinical research, evidence-based reviews and debate on the important issues affecting Australian health care.”

“We find it disturbing that AMPCo has taken this action despite the record of Elsevier,” the letter said. “We call on the AMA to investigate the circumstances of this arrangement struck between AMPCo and Elsevier and its implications for ethical publishing in our national medical journal.”

Wittert also tweeted that the AMPCo board should resign over the decision.

Here is the statement from AMA President Brian Owler, sent out to AMA members by email today (Sunday): 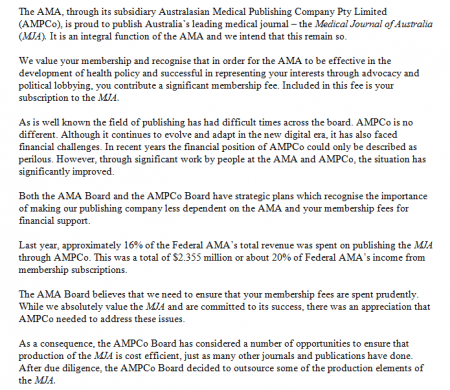 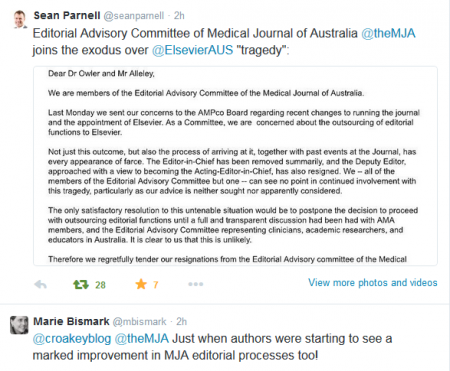