Last week’s announcements of massive cuts to journalist numbers at Fairfax and at The Guardian continue the upheaval in the media as it adjusts to a digital world and declining advertising. This week has also seen the last print editions of The Independent and Independent on Sunday newspapers in the United Kingdom. 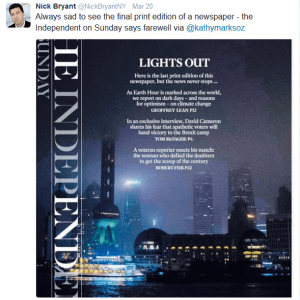 The fear is that it is particularly putting investigative journalism and specialist reporting at risk. Certainly it’s hard to imagine many of the current outlets now having a special unit that, as the film Spotlight documents about the Boston Globe, could spend up to a year on an investigation.

The upheaval is also hitting specialist media. Health and medical journalism had its latest blow this month with major changes at Medical Observer, which saw significant losses to its journalism team, including its respected editor Jennifer Cooke, as its print edition moves from being weekly to monthly.

That follows the turmoil last year at the Medical Journal of Australia when leading medical academic Stephen Leeder was sacked as editor-in-chief over his opposition to the outsourcing of sub-editing and production work to global publisher Elsevier, prompting the en masse resignation of nearly all the journal’s editorial advisory committee in protest. This was followed by a protracted round of redundancies of editorial, production and support staff, which wrapped up at the end of last year.

News about Medical Observer broke via one of its competitors and former stakeholders. It’s quite a complicated connection: the story was run in B&T, owned by The Misfits Media, which publishes The Medical Republic, a ‘new kid on the block’ that was launched last year by Jeremy Knibbs. Knibbs is a former CEO of Cirrus Media, which owns Medical Observer.

As background, Medical Observer is the second most-read General Practitioner-targeted publication in Australia, with circulation among GPs reported (at March 2015) at more than 20,000, just behind the market leader Australian Doctor.

It’s worth noting here too that Cirrus also owns Australian Doctor and there were considerable concerns about the likelihood of the two competing magazines continuing within the same stable when Cirrus bought Medical Observer in February 2014.

Knibbs left Cirrus in July 2014, saying he had been having “a reasonable level of disagreement” with the Board on future strategy.

Medical Observer started in 1987 as a fortnightly publication, “when advertising was huge with a lot of new drugs on the market which were prescribed by GPs, the target audience”, as one source remembers. It later went weekly and into fierce rivalry with Australian Doctor.

Asked about the veracity of the B&T report, Clifford Fram, Editor in Chief of both Medical Observer and Australian Doctor (along with Pharmacy News and myDr), told Croakey:

“It is full of conjecture and is published by a competitor.”

He provided detailed responses to a range of questions from Croakey (see below), and a media statement that included the following:

After almost three decades as a weekly tabloid, Medical Observer is being relaunched as a monthly magazine.

The change is aimed at ensuring the print title complements rather than repeats the content of its popular online offering. It is also aimed at ensuring a better fit with its weekly sister publication, Australian Doctor, which will retain its glossy tabloid format.

“We are excited about the changes. Medical Observer is a household name among Australian GPs. This will ensure it thrives into the future,” says Kartik Natarajan, Managing Director Healthcare, at the publication’s owner, Cirrus Media.

The process towards the change started more than two years ago when Natarajan commissioned an in-depth survey into the life of Australian GPs. The survey inspired a two-pronged strategy: A redesign of the Medical Observer website and an overhaul of the print title.

The statement said the website redesign has been a resounding success and the print redesign is due for launch in May:

The idea is to make life easier for busy doctors, according to Editor-in-Chief Clifford Fram.

“They need to be up to date with what is happening in medicine. But, in the focus groups, they acknowledged that they don’t have time to read medical journals as often as they would like.”

“We focus on one or two big topics in every issue. We take dense and complicated research and interpret it in engaging, thought-provoking articles. But there is also space for a bit of fun and light relief.

“Our readers have told us they love the new concept. That they will go to the website for news and will keep the magazine for a month-long deeper read. Some have been so impressed that they said they would cut the articles out and keep them.”

Here are excerpts from Clifford Fram’s responses to Croakey’s questions about Medical Observer.

Q: How many and which staff (and contributors) have been cut and when did/do they finish up? Who remains?

A: Four fulltime positions plus three shifts a week have been cut. Sadly, this means seven colleagues left us on Friday. (It would be insensitive of me to name them). Medical Observer now has seven journalists and doctor-writers dedicated to the title. I will play a daily hands-on role and will edit the monthly magazine. Combined with our stable of freelance writers (many of whom are medical specialists), this is an adequate level of staffing for the online and monthly print products. We are also supported more than 20 other journalists and doctors at Cirrus Healthcare, which is by far the biggest and most experienced medical news organisation in Australia.

Q: Have subscribers been advised and, if so, could you share that advice with us?

A: We have published a double page spread announcing the change and I will publish a page 1 article explaining what is happening.

Q: When will the last weekly edition of Medical Observer be published?

Q: What sort of factors have led to this decision? Cirrus said, when it acquired Medical Observer and the MyDr website, that it would be “a good long-term home for the brands”. Could you please advise what changed, and what you might see in terms of wider problems and implications for medical publishing?

A: This is a strategic move to ensure that our two flagship titles complement each other rather than compete with each other. Close to two years ago we undertook an in-depth study of doctors, their media consumption and pain points. A consequence of the study’s findings was to create a more engaging digital experience, which we did last year with the launch of our new Medical Observer website. The website redesign has been a resounding success. Engagement is up 70 per cent. Peer-to-peer interaction has been remarkable, with comments up more than 350 per cent. And this is just the beginning. There will be a lot more happening on the website this year.

Q: Given that Cirrus owned both the number one (Australian Doctor) and number two (MO) magazine titles in the GP magazine market, was it inevitable to close one, as many feared?

A: Medical Observer has not closed. Its print edition has gone monthly and it has a vibrant website with a daily e-newsletter (see above).

Q: How secure is the future of Australian Doctor?

A: Extremely. Particularly since it now has a stablemate that complements it rather than competes with it. Australian Doctor and Medical Observer are still the clear number 1 and number 2 in the market. They now just offer their readers a better mix of long-form and news journalism. The Australian Doctor print title is doing really well. It is breaking great stories on a regular basis and is getting a lot of advertising support. Website engagement is also showing tremendous growth.

Q: Has the MO decision been influenced by the emergence of The Medical Republic?

A: This is a strategic change that was inspired by a process that started almost two years ago. The frequency change was inspired by feedback from doctors in our focus groups.

Q: How would you describe the state of pharmaceutical advertising?

A: I have asked Kartik Natarajan, the Cirrus head of Healthcare, to answer this question. He says: “While there are challenges in the industry, largely brought about by the way in which off-patent drugs are subsidised by the PBS, there are significant growth areas in digital, content marketing and specialist therapy areas. In addition, we believe that moving Medical Observer to a monthly magazine format opens up new non- pharmaceutical sources of advertising.”

Croakey also yesterday approached Jennifer Cooke about this article but she declined to comment.

It remains to be seen whether this is a ‘just’ another shakeup in medical journalism or more of the wider problem for medical publishing around dwindling revenue that will rob readers and sectors of specialist voices and expertise.

Big change is also underway with the controversial media ownership changes proposed by the Turnbull Government, which would abolish the “75 per cent reach rule” and the “2 out of 3 rule” that have limited Australia’s otherwise highly concentrated media. In this submission to the Senate enquiry into the laws, the Public Interest Journalism Foundation proposes ways to protect independent journalism in the midst of these changes.

And this collaborative research project is also exploring the impact of national charity and tax laws and regulation on efforts to establish and operate not-for-profit news organisations, with a focus on the United Kingdom, United States, Canada and Australia.

Finally, Croakey readers might also be interested to read these previous pieces on the loss of specialist health/medical and science journalists….

… as well as these responses on Twitter (more to come)

Perhaps the only good news out of all this is that Croakey has gained considerable talent and experience as a result of media changes, with Dr Ruth Armstrong (Medical Journal of Australia) and Amy Coopes (former Australian Associated Press, Agence France Press correspondent, and fellow of the  Asia Pacific Journalism Centre) joining our ranks.

Declaration: Croakey founder and moderator Melissa Sweet was a columnist at Medical Observer and is a board member of the Public Interest Journalism Foundation.

PrevPreviousLongread: Why is sexual assault still often missing from the focus on violence against women?
NextFor children’s sake: Raise the age of criminal responsibilityNext