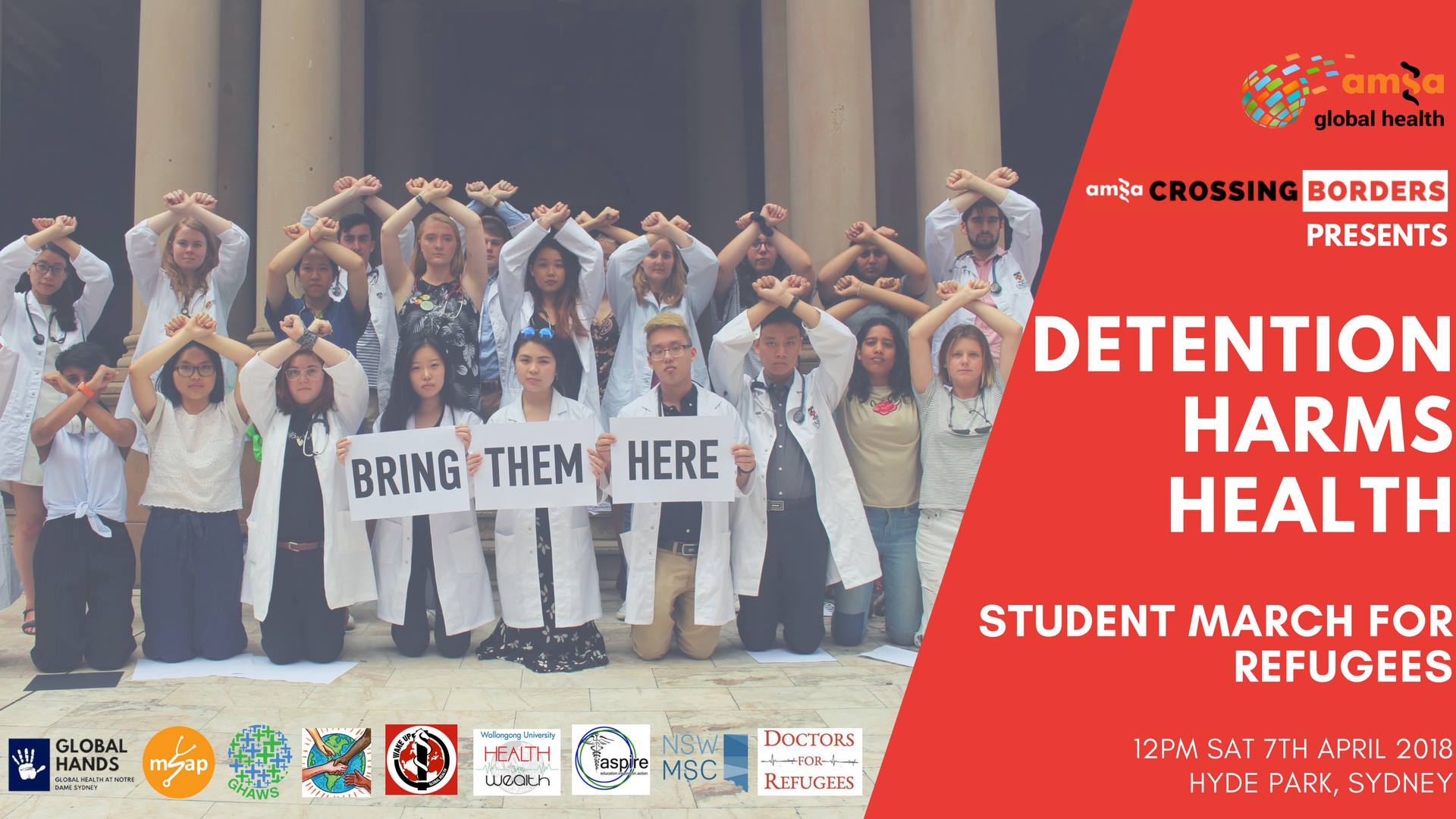 The Australian Federal Government’s closure of the Manus Regional Processing Centre (MRPC) last year galvanised and mobilised medical students from around Australia to send a clear message to the Australian Government: “We are watching”.

At the end of October 2017, over 600 asylum seekers on Manus Island were left without power, water, food supply, and access to healthcare, as the Australian Federal Government closed the MRPC and diverted responsibility to the Papua New Guinea (PNG) Government. There was a large public outcry following reports of threats to the safety of the asylum seekers and their lack of access to resources, especially medical care.

In response, members of AMSA, the peak representative body of 17,000 Australian medical students, were encouraged to contact their respective Members of Parliament to express their concerns about the situation during a nationwide campaign in November 2017. At this time, the Australian Federal Government turned a deaf ear.

The Australian Federal Government said that asylum seekers on Manus Island would be relocated to an alternative accommodation, the East Lorengau Refugee Transit Centre of West Lorengau House. However, a report from the UN Refugee Agency (UNHCR), released in late November 2017, revealed that this alternative accommodation was still under construction and that basic services required by the asylum seekers were still not adequately provided outside of the MRPC. These included medical care and support for mental health and psychosocial issues.

The UNHCR called on the Australian Federal Government to “take responsibility and play an active role in achieving solutions” for the asylum seekers on Manus Island. Once again, our government did not listen.

Still without an adequate solution to the humanitarian crisis on Manus Island, in November 2017, AMSA members launched a national social media campaign to raise awareness and encourage ongoing public pressure using the hashtag #SOSManus. The campaign culminated in the composition of an open letter sent to Prime Minister Malcolm Turnbull and Mr Peter Dutton in late December 2017.

The open letter supported the call by the Australian Medical Association to allow a team of Australian medical professionals to independently assess whether the government “has done all that is possible to protect the health and wellbeing of the asylum seekers”, a request that was rejected by Mr Dutton. It also echoed the requests of peak medical bodies to improve the available healthcare services on Manus Island.

The response from the Department of Home Affairs (DoHA) failed to address concerns about the lack of access to medical care. It reiterated the Australian Federal Government’s stance on their current treatment of asylum seekers and refugees in a chilling statement:

“The Australian government’s border protection policies are here to stay. No-one subject to regional processing arrangements will be resettled in Australia.”

AMSA members sent a follow-up letter to the DoHA, seeking answers to specific questions and concerns regarding the health and wellbeing of the asylum seekers on Manus Island. It called on Mr Dutton to clarify whether the accessibility, frequency, range, and consistency of the available medical services are to a standard equal to that of Australia. It also repeated the request for an independent medical body to undertake a comprehensive assessment of the health needs of the asylum seekers.

DoHA’s reply insisted that ensuring the health and wellbeing of the asylum seekers on Manus Island is the PNG government’s responsibility.

The Australian Federal Government refuses to be accountable for their treatment of these asylum seekers. This is a clear violation of their legal and ethical obligations to protect and provide adequate care to asylum seekers and refugees under international law. The UNHCR has criticised Australia, saying that it “has in effect created and then abandoned a humanitarian crisis at the doorstep of the international community”.

As Australian medical students, we have continued our advocacy. We want the Australian Federal Government to know that we are still watching – in horror and disbelief as they continue to disregard the human rights of the asylum seekers on Manus Island.

However, watching is not enough when there is an ongoing humanitarian crisis. It is a responsibility of all health professionals to advocate for health and wellbeing for all, especially those who are in the most vulnerable and disadvantaged groups. These people will be a part of our future patient population when we become doctors, and it is important to take action now to minimise the impacts of their experiences on their health.

This is why we have organised the Detention Harms Health – Student March for Refugees, to be held on Saturday, April 7.

We are calling for the Australian Federal Government to allow the independent assessment of the asylum seekers and refugees on Manus Island and Nauru. We urge other health professionals and members of the community to join us.

*RJ Seastres is a final-year medical student. He is the Vice Chair External of AMSA Global Health, an AMSA committee that seeks to connect, inspire, and empower medical students to effect change towards global health equity through tangible, unified, responsible, and sustainable action. On twitter @RJSeastres Email: vceATglobalhealth.amsa.org.au

The Detention Harms Health – Student March for Refugees is on Saturday, April 7 2018 from 12 PM – 2 PM at Hyde Park, Sydney.

Text of AMSA’s most recent letter to Peter Dutton:

RE: Response to the Minister’s correspondence regarding the health and safety of asylum seekers on Manus Island

Thank you for your response to our letter via the Director of the Australian Border Force Ministerial Correspondence Section. We appreciate the time taken to acknowledge and respond to our concerns. However, we remain concerned about several health-related issues regarding the asylum seekers on Manus Island, which were not addressed in your previous correspondence. We would appreciate clarification on the following issues.

1. The quality and nature of medical services provided on Manus Island From your response, we acknowledge that a medical clinic is available six days per week, offers primary health care and mental health services, and is staffed by doctors, mental health nurses, psychologists and counsellors. We also acknowledge that after-hours emergency services are available at Lorengau Hospital. However, we are concerned about the quality and reliability of these medical services.

• How many number of hours per day are the health professionals available for clinical consultations?

• Are the psychologists and counsellors specifically trained in managing trauma and torture?

• What is the average wait time for the asylum seekers to receive primary health care and mental health services?

• What specific types of medical services are provided at the medical clinic?

• What measures are in place to ensure these medical services provide an adequate and consistent standard of care comparable to that in Australia?

We would like to be assured that the accessibility, frequency, range and consistency of medical services are adequate by echoing the requests of the Australian Medical Association (AMA), Royal Australasian College of Physicians (RACP), Royal Australasian College of General Practitioners (RACGP) and Royal Australian and New Zealand College of Psychiatrists (RANZCP). Will you permit an independent national body of medical experts to regularly assess the healthcare needs of the asylum seekers on Manus Island?

We ask for confirmation that the Department of Home Affairs is ensuring medical care is delivered in a timely and sustainable manner, without interruption, to a standard equal to that in Australia.

2. The standard of the current living facilities on Manus Island We are concerned at the living conditions of the asylum seekers on Manus Island, in particular the standard of hygiene and sanitation, and their security. Over the last month, there have been several reports about the substandard level of hygiene and sanitation in the new accommodation facilities for the asylum seekers. Sewage problems at West Haus were cited in January 2018, causing disruption to both asylum seekers and local Manusians.

This puts the asylum seekers at risk of preventable water-borne illnesses such as gastroenteritis. At the same time, heightened security threats and road closures have been reported to interrupt the medical provision by the International Health and Medical Services (IHMS). Has the sewage problem at West Haus been resolved? Are there similar problems at the other accommodation sites, and are they being resolved in a timely manner?

The UN has also reported that living conditions on Manus Island are significantly below international standards, including inadequate security fencing, living space and ratios of toilets and showers to numbers of people living in shared facilities (UN Refugee Agency, Fact Sheet on Situation of Refugees and Asylum-Seekers on Manus Island, Papua New Guinea, 21 January 2018). We ask for confirmation that the Department of Home Affairs is taking appropriate steps to improve the security and sanitation facilities at the accommodation sites for the asylum seekers.

Although the Manus Regional Processing Centre has been closed, Australia’s responsibility for the basic health and welfare of the asylum seekers on Manus Island does not immediately end. These asylum seekers were subjected to traumatic conditions under Australia’s detainment policies for many years and now live with direct physical and psychological consequences. Australia is still ultimately responsible for their health and wellbeing. We ask you and the Department of Home Affairs to honour your duty of care for these people and uphold their universal human right to health and wellbeing.

We would appreciate clarification on the questions we have outlined above. We also repeat our request for the establishment of an independent medical body to undertake a comprehensive assessment of the health needs of the asylum seekers on Manus Island.