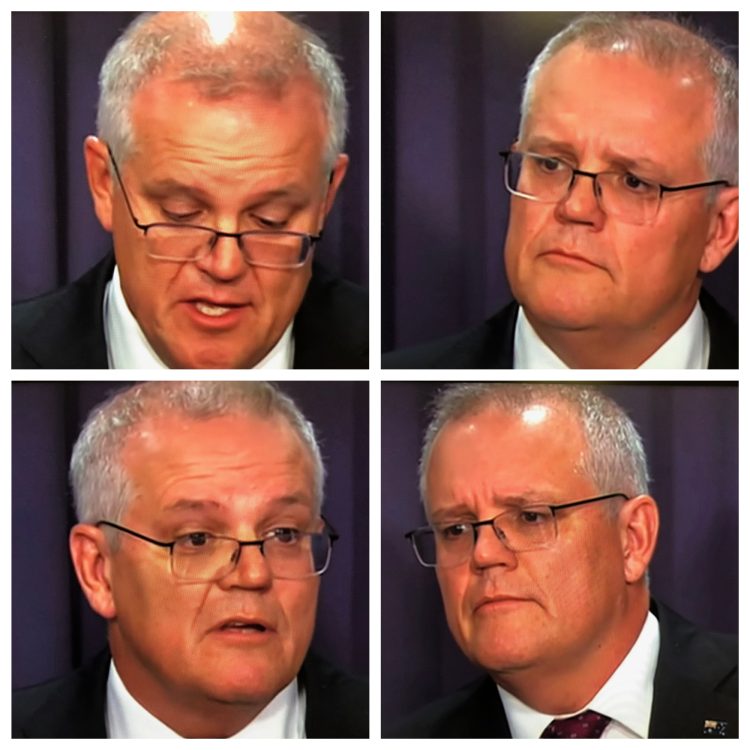 Memo Liberal women: if you really want to confront misogyny in your party, you need to fix the policies

Introduction by Croakey: Prime Minister Scott Morrison’s mea culpa media conference was meant to show people angered and shocked by the Federal Government’s failure to act properly on a series of sexual discrimination, harassment and assault issues that he “got it”.

It was meant, as ABC broadcaster Patricia Karvelas wrote, to show that he understood “the intergenerational trauma, the relentlessness of the subordination, the lack of respect, the fear, the repetitive reality of being talked over, objectified, sexualised, marginalised, trivialised, harassed and assaulted.”

Instead, as has been widely reported, his unscripted performance misfired badly.

In a memo to Liberal women in the Prime Minister’s ranks, Arrow says that MPs who are serious about confronting a misogynist culture in their party, would have to deal with the impact of the Coalition’s policies on women.

Among many devastating blows to women’s incomes, health, wellbeing and safety is the end, in just seven days, of the JobSeeker Coronavirus Supplement, which will return the payment to punitive levels from the Newstart past, about $44 a day, with disproportionate impact on women.

As the Australian Council of Social Service (ACOSS) has said in its desperate campaign to boost JobSeeker payments, both racism and sexism are inherent in our social security system.

Memo to all politicians. And voters.

One group of women was strikingly absent from the March4Justice rallies last week: Coalition MPs. Admittedly, there are not many of them (only 23% of the government’s MPs are female), but the refusal of the minister for women to attend the demonstration was a remarkable abrogation of responsibility.

One female Liberal MP, Tasmanian Bridget Archer, attended the demonstration, assuming – wrongly – it would receive bipartisan support. Like many who marched, she was motivated to attend by what she described as “a deep-seated rage”.

Women across Australia have expressed similar feelings: March4Justice events held across the country attested to a resurgent feminist anger. This rage has been sparked by overwhelming evidence of a misogynist culture that ignores and downplays sexual assault and enables perpetrators to escape justice.

Very few of the LNP’s female ministers spoke out against their party’s culture of toxic masculinity in the wake of the news about Brittany Higgins’ alleged rape. Like most players in this awful story, most seemed focused on establishing their lack of knowledge of the incident after it allegedly took place.

How extraordinary, then, were the events of Monday evening. Reports broke that male Liberal staffers had exchanged videos featuring themselves engaging in sex acts in Parliament House.

Nationals MP Michelle Landry told reporters she was “absolutely horrified” by the story, but added: “The young fellow concerned was a really good worker and he loved the place. I feel bad for him about this.”

That these reports of lewd behaviour in Parliament House are now drawing the comment of otherwise silent female Liberal and Nationals MPs is telling. If these MPs were serious about confronting a misogynist culture in their party, they would have to deal with the impact of the Coalition’s policies on women.

Let’s start with JobSeeker. Women form the majority of 2 million JobSeeker recipients affected by the federal government’s decision to replace the $75-a-week Coronavirus Supplement with a $25-a-week permanent increase in JobSeeker. The Australian Council of Social Service (ACOSS) warned that rolling back the supplement would have a “devastating” impact on women. The government did it anyway.

Read more: COVID-19 is a disaster for mothers’ employment. And no, working from home is not the solution

The government consistently failed to recognise the disproportionate impact of the pandemic on women. During the COVID lockdowns, women lost their jobs at a faster rate than men and were offered fewer supports. They also shouldered far more of the unpaid care work associated with childcare and home schooling.

Yet government ministers failed to consult the Office for Women on the big policy responses to the pandemic, including JobKeeper and JobSeeker. Free childcare was the first policy to be wound back in the pandemic “snapback” last year.

The mismanagement and neglect in aged care is a feminist issue. Two out of three residents in aged care are women. Almost 90% of the aged care workforce is female.

The recent Royal Commission into Aged Care called for much stricter regulation and improvements to workforce conditions. Yet, given the government has consistently rejected calls for greater regulation of the sector, the future looks bleak for those who live and work in residential aged care.

Women also bore the brunt of the massive fee hikes to university courses that formed the centrepiece of the government’s Job-Ready Graduates Package in 2020. The steepest fee increases (up to 113% in some cases) were for humanities and social sciences courses: in 2018, women comprised two-thirds of enrolments in these subjects.

On domestic and family violence, the government has reduced supports for survivors, who are overwhelmingly women. The telephone counselling service 1800 RESPECT, previously managed by Rape and Domestic Violence Services Australia, was outsourced to a private health insurer in 2017. There was a corresponding decline in the quality of service offered to those in need.

The government’s recent merger of the Family and Federal Courts reduces the resources available to women and their children for settling complex family law matters. The government was even considering allowing domestic violence survivors to access their superannuation early – effectively funding their own meagre safety nets – to escape violent relationships, an idea it has since abandoned.

Of course, the ALP is not immune from making policies that harm women. On the day Julia Gillard delivered her famous misogyny speech in parliament in 2012, the Labor government also legislated to move thousands of women from a parenting payment to the lower Newstart payment.

But the far wider breadth and depth of successive LNP governments’ attacks on women through policy are, frankly, breathtaking.

LNP women’s attitude to feminism might be best summed up by Julie Bishop’s sparkly red shoes. She wore them on the day she resigned as foreign minister, her leadership aspirations defeated by men in her own party, whom she only now identifies as the “big swinging dicks”. The shoes today sit on display in Old Parliament House.

Bishop’s brand of glamorous, individualistic one-woman celebration took her all the way to cabinet. Until, that is, it couldn’t take her any further. A “feminism” premised on a single white woman’s empowerment, rather than a movement that works to safeguard the rights and freedoms of all women, is not up to the demands of the present moment.

All the quotas in the world won’t change the culture of the government if none of the women who are elected are prepared to stand up for women’s rights.