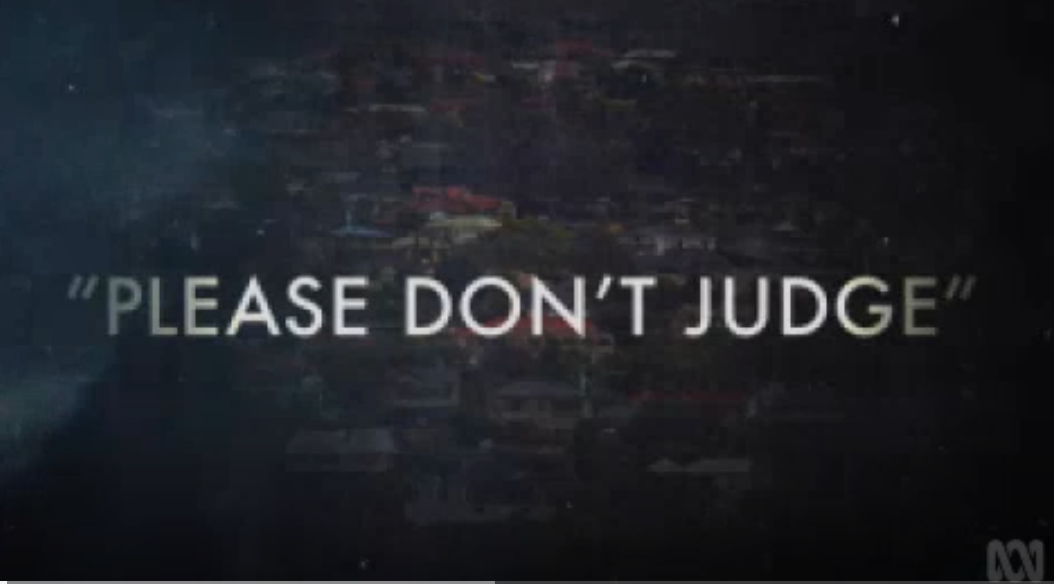 Introduction by Croakey: Nearly 300 mental health consumers and allies across mental health disciplines have signed a letter calling on the ABC to apologise for its recent Four Corners TV episode, “Please don’t judge us”, which the program flagged as investigating “violent crime and the mentally ill”.

The letter, signed by leading mental health consumer advocates and academics, says the story has caused “harm, grief and sadness” and risked exacerbating stigma and discrimination.

They say the program failed to interview a single person with lived experience of mental health issues, reinforced sensationalist stereotypes, and overlooked the complexity in changes needed from the system, including recognition of the harms experienced by many consumers through treatment and medication.

The letter is published in full below, or can be accessed here.

The Four Corners episode focuses on the graphic accounts and experiences of a number of families whose loved ones have committed a violent crime while suffering a severe mental health crisis. An undated editor’s note at the bottom of the episode’s webpage says:

Four Corners notes that cases such as these are extremely rare, and people with a mental illness are far more likely to be the victims than the perpetrators of violent crimes.”

Coakey readers can also watch this video statement from leading mental health consumer, author and advocate Sandy Jeffs, who was issued a Medal of the Order of Australia this year. She says the program risks “untold damage” to people with schizophrenia who were “demonised” by its approach, even if it had hoped to expose the failings of the mental health system.

A number of other mental health organisations have issued statements about the program, including Consumers of Mental Health WA, the Victorian Mental Illness Awareness Council (VMIAC), BEING – Mental Health Consumers, and SANE Australia.

Croakey readers might also be interested to read Mindframe’s guidelines for media reporting on mental health and suicide.

UPDATE (4 September): The ABC News Communications Lead Sally Jackson published this statement earlier this week in response to the concerns and complaints from consumers about the way the program dealt with the issue.

Please see also a comment to Croakey, at the bottom of the post, from one of the participants in the program, who defended the broadcast, saying it was highlighting “the broken mental health system in Australia” and how it failed her family and others.

Open Letter to the ABC

We are compelled to write to you about your recent Four Corners TV episode,  “Please don’t judge us”.

This letter is written by people with lived experience, consumers and/or survivors of the mental health system. You may not be aware of us, since not one of us was interviewed in your program. It was as though you thought that we are not quite human, that we cannot speak for ourselves.

We can see that you wanted to produce an episode which bravely tackled issues in the mental health system. We suspect you wanted to make an important societal contribution to people and families who need help. There is no doubt that mental and emotional distress affects everyone, and that carers and families can live through very difficult times as they try to find a way to help for their family member.

But we need you to know that you have failed. Badly.

Your story has caused harm, grief and sadness. You have just made stigma and discrimination worse for thousands of Australians like us. You have stolen and silenced our voice. And you have promoted psychiatric practices and a system in which many people experience institutional violence, abuse, and inhumane treatment (see below in item 3).

So, we’d like you to know why you got it wrong. Then we ask you to take action to make up for the damage that you have wrought, and to be true to:

From our perspective, you made three grave errors.

Your production positioned us as people to be feared. As demonised, violent, dangerous, unpredictable ‘others’. This is a clear stereotype. We only account for 4-5% of violent crime in Australia, and even then, this is often not due to mental illness, but factors common to violence committed by anyone.

Your focus on violence was reminiscent of media coverage which vilifies other classes of people. Like media that blames violence on so-called ‘African gangs’. Or media that blames Muslim people for terrorism. Another ABC story critiqued this kind of blaming, “lazy shorthand” in media reporting on “African gangs”. For us, too, this “lazy shorthand” does nothing but promote fear and hate, while avoiding the uncomfortable truth about violence: it is complicated, and it is not the fault of any particular group of people.

The sad truth about violence and mental distress is the opposite of what you proposed. While very few of us are violent, a great majority of us, 80% or more, have been victims of violence. That’s often why we end up in distress and crisis. Violence is far more often a cause of mental health problems, not a consequence of them.

Perhaps you don’t know that we are capable of speaking for ourselves, and that many of us work as active agents of change throughout the mental health system and society. As academics, peer workers, advocates, policy advisers and educators. We have peak bodies in most states. We are also parents, artists, writers, and sometimes even quite ordinary, boring people. Some of us even work for the ABC!

It is important that carers and families have a voice to talk about their own needs and issues. But they cannot, and do not, speak for us – they speak for themselves. A properly critical investigative story would have understood and appreciated these different vantage points.

It is no surprise when psychiatrists call for more funding. Every industry group does that. It is no surprise that carers and families call for us to be hospitalised and medicated, because they are scared for us and they don’t know what else to do.

Psychiatric hospitals are places where many of us experience profound institutional violence and human rights violations; think youth detention centres, or mandatory detention of asylum seekers. Robust professional journalistic investigation, with ‘balance and perspective’, would have unearthed this very quickly.

We agree that changes are desperately needed in how we respond to mental and emotional distress, but it is simplistic and dangerous to assume this means more beds and more meds. The changes needed are complex, and we have lots of ideas about them – but they must be grounded in human rights, choice, and our voices.

We want an acknowledgement, apology, and an opportunity to be heard

Your TV episode has done serious harm to us as individuals, and as a community of people who experience the mental health system. Too often, we lose friends and family who are frightened by reporting like yours. And yet there are claims for more inclusion. Sadly your reporting was divisive.

Now, we risk losing even more human connection, face more discrimination, and perhaps we are even be more likely to be detained and forcibly medicated against our will. In terms of harm done, plenty; in terms of good done, it is hard to see any potentially helpful outcomes from your story.

This undermines our human rights and our humanity, and it demands redress.

We call on you to:

We want you to understand that, as a class of people, we face profound levels of discrimination, hate, violence and silencing of our voice – and you have contributed to this.

We know that Four Corners and the ABC can do, and has done, outstandingly ethical investigative reporting, despite the failures of this episode. We need you, as our national broadcaster, to be our allies for change, not part of what hurts and excludes us.

We, the undersigned, are all people with a lived experience, consumers and/or survivors of the mental health system.

As allies and supporters of mental health consumers/survivors, we offer our support and endorsement to this open letter:

(Many others have signed the Open Letter online).

PrevPreviousTackling the substance abuse epidemic in a pandemic
NextTo govern for health: transform the conversationNext