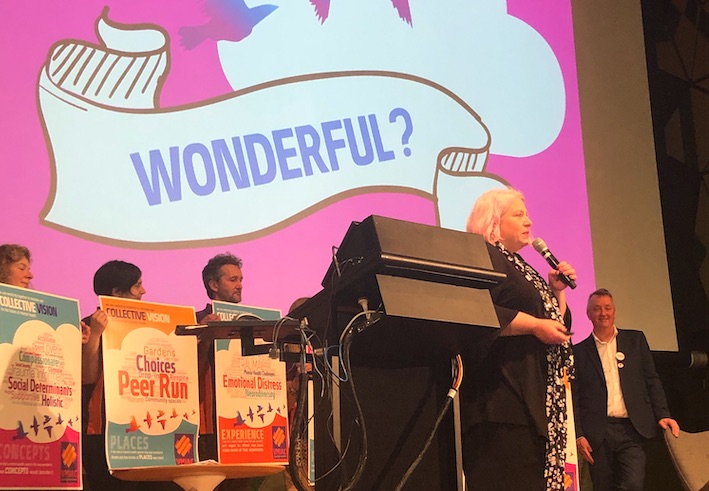 “If we replaced the current mental health system with something wonderful, what would it look like?”

That was the question at the heart of a Declaration, launched last week at the Victorian Mental Illness Awareness Council (VMIAC) biennial conference in Melbourne, which asked nearly 200 mental health consumers across Victoria to dream about a new mental health system.

The resulting VMIAC Declaration talks about a system “shaped by compassion, love and the social determinants of health”, which is trauma-informed and holistic, addresses climate change, is accessible, and has music, politics and green space at its heart.

Aiming to be a “vision of hope” as major national and state inquiries are now reporting on mental health reform, it won a standing ovation at the conference and much love on Twitter.

Alliance members told Croakey they had not been able to contribute as strongly as they wanted to national forums and inquiries such as the Productivity Commission’s because the state peaks did not speak with a national voice.

In a joint statement, they said:

“After many years of discussions and at the request of consumers across the country, we have today committed to establish a national consumer peak alliance led and owned by state peak bodies that will influence, lead and advocate on behalf of people who experience mental health challenges.”

Watch the announcement by Alliance members.

VMIAC strategic project manager Indigo Daya told the conference the Declaration was a deliberate shift from the Council’s traditional advocacy work, which is usually focused on addressing specific harms and human rights breaches in the mental health system.

For the Declaration, VMIAC did not ask mental health consumers to re-tell their stories of pain, distress and harm in the face of a broken system but rather to dream of what could be.

It asked them to “imagine a miracle had occurred”, and that society had changed to be wonderfully supportive. What would that look like?

It asked what services and professionals they would most want to go to, what would be helpful and healing, and what society would be like in such a system.

Daya collected people’s dreams via surveys, workshops and a private online forum, telling the conference that the heartfelt and often heartbreaking responses were of course as diverse as the experiences of those who were making them – and that they made her laugh and cry.

Some were huge dreams, like ending capitalism and getting rid of the DSM (Diagnostic and Statistical Manual of Mental Disorders), she said.

There were others that “on the surface seemed tiny but perhaps were the biggest of all…to be able to afford enough food”, or for a social security system “designed to support people instead of punish them”.

But the message that stood out above all others was about the importance of choice, she said.

“The volume and complexity and diversity of what people want and need is massive, and at the moment what we get is a GP and some pills at this end of the system or a hospital and some more pills at the other end, or we get locked out and get nothing,” she said. 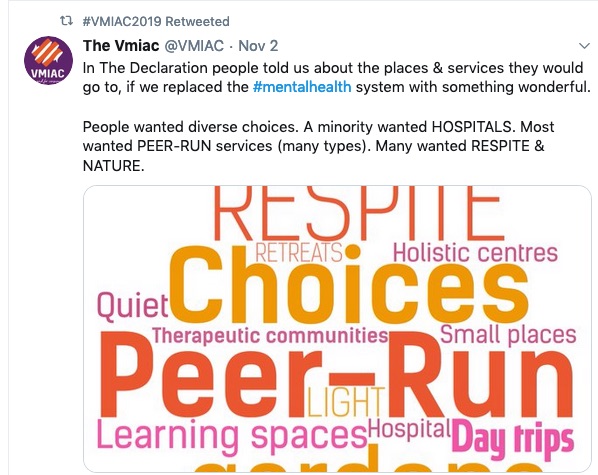 Daya, who is also a consumer academic at the University of Melbourne, said the places that consumers most wanted in an ideal mental health system were peer-run services, in many variants: respites, recovery houses, crisis centres, peer support groups, recovery colleges and retreats.

“People providing support would be those like ourselves, people who know what it’s like to live in this world, who have experienced similar issues/challenges and lived similar experiences.”

“Having people to talk to who don’t panic and go into rescue/ carer/ freak out mode. And who let you be.”

A big standout was the importance of nature in an ideal healing space: gardens, trees, lawns, flowerbeds, and the role of art, music, political action, and animals.

People wanted to be listened to, to experience compassion, to be free from violence and coercion, and to be “welcomed, not judged, feared and controlled”.

Asked about what types of health professionals were important in their visions, most of the professions in the system were nominated  – from social workers and occupational therapists through to nurses and psychiatrists.

But Daya said the two roles that most consumers nominated for their ideal system were peer workers and therapists: “the two roles that get the least funding and have the least presence in our mental health system – and they are the ones people want the most”. 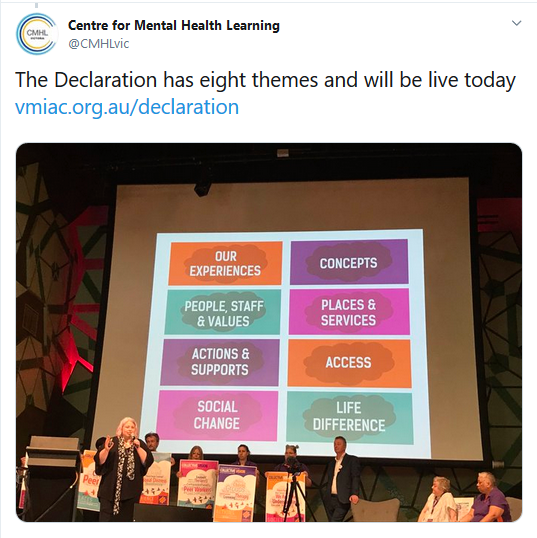 A challenge and an invitation

In a later interview with Croakey, Daya said the Declaration aimed to offer hope for mental health consumers, as well as providing a challenge and invitation to governments and inquiries shaping mental health reform, particularly the Royal Commission into Victoria’s Mental Health System, which will release its interim report later this month.

Consumers would judge the findings and recommendations of these investigations and government responses according to “how well they align with our dreams”.

“We’re the people who live it,” she said.

And while there is ongoing concern that consumer voices won’t be heard enough in those inquiries, particularly given disappointment that Victoria’s Royal Commissioners did not include a consumer, Daya welcomed comments at the conference from Victorian Mental Health Minister Foley on compulsory treatment and detention.

Stressing the need for a consumer-led, consumer-directed system, Foley said that while he recognised the desperation that drives some families and carers to call for a more “authoritarian system”, the mental health system could not go back in time and condemn another generation to that “cul de sac of pain and misery”.

The Declaration says that for too long, governments have “listened to the wrong people” about what’s needed in the mental health system, including the sector, which “will  always lobby for their interests first: more hospital beds, more clinical jobs, more funding”.

“And with that comes many things that we don’t want,” it says.

“We call on governments and mental health leaders to listen to our dreams, and to help us create the kind of society, systems, services, places and supports that matter to us.” 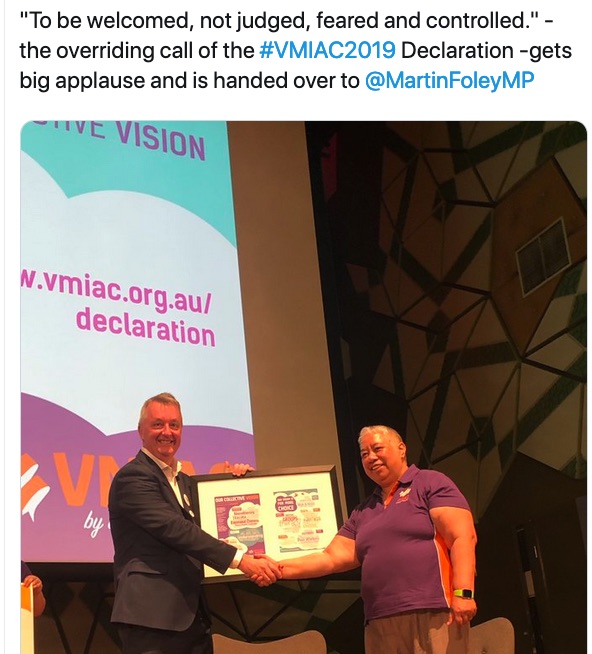 Watch this interview with Indigo Daya 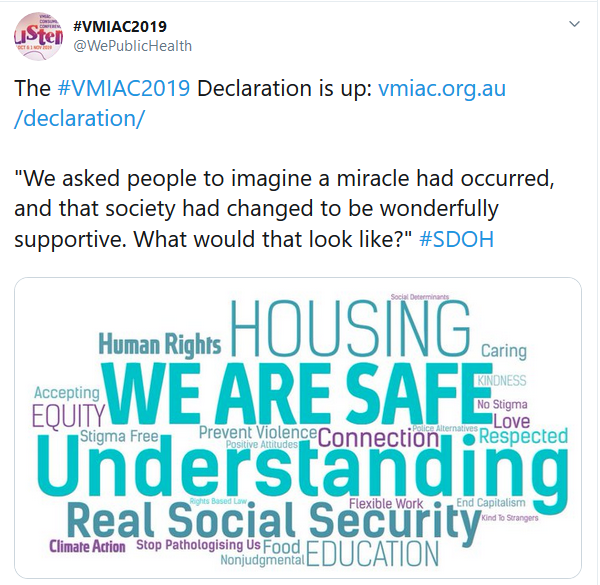 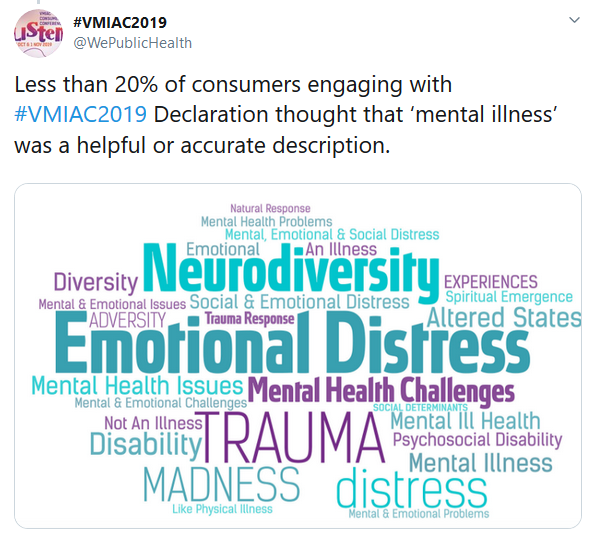 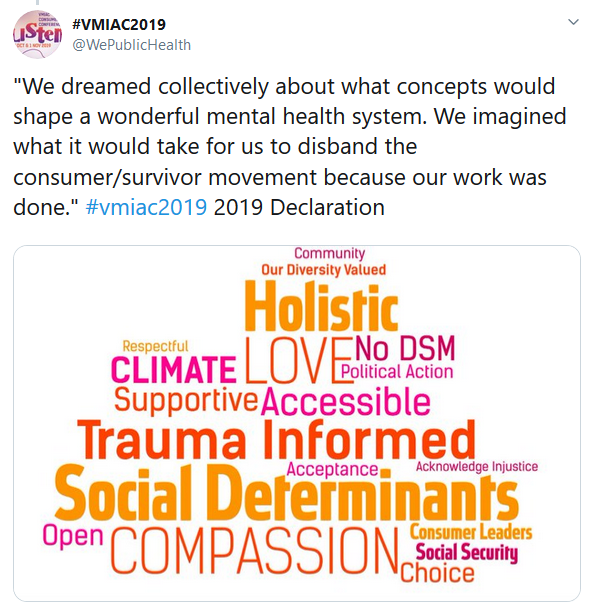 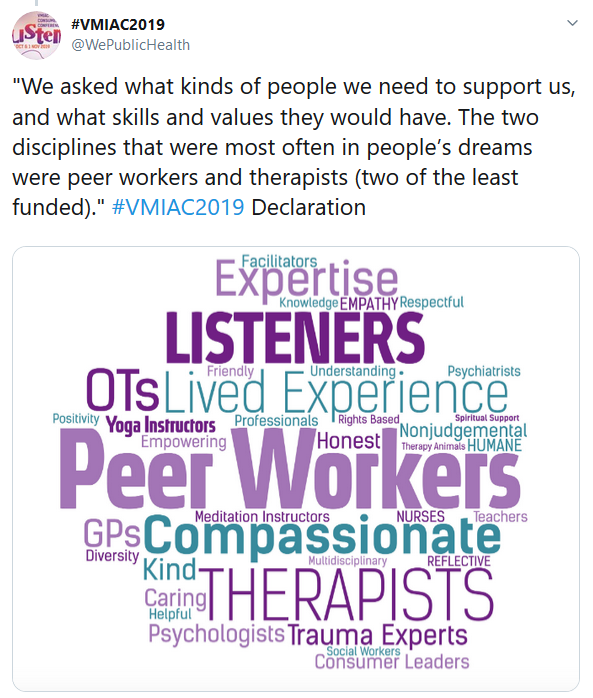 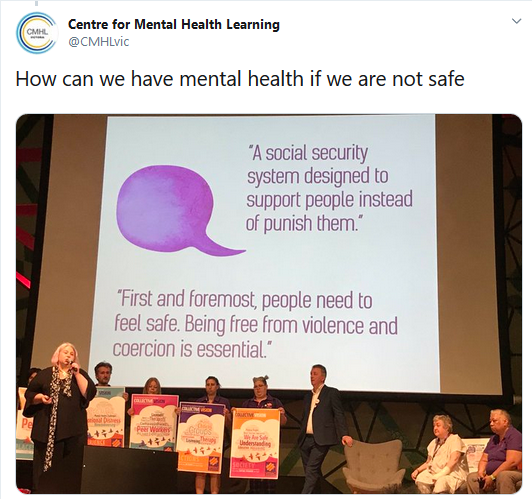 Marie McInerney is covering #VMIAC2019 for the Croakey Conference News Service. Bookmark this link to follow our coverage.

PrevPreviousPublic Health in an Open Society: how society and language shape prevention
NextWomen’s health conference highlights the toll of violence and reproductive coercionNext