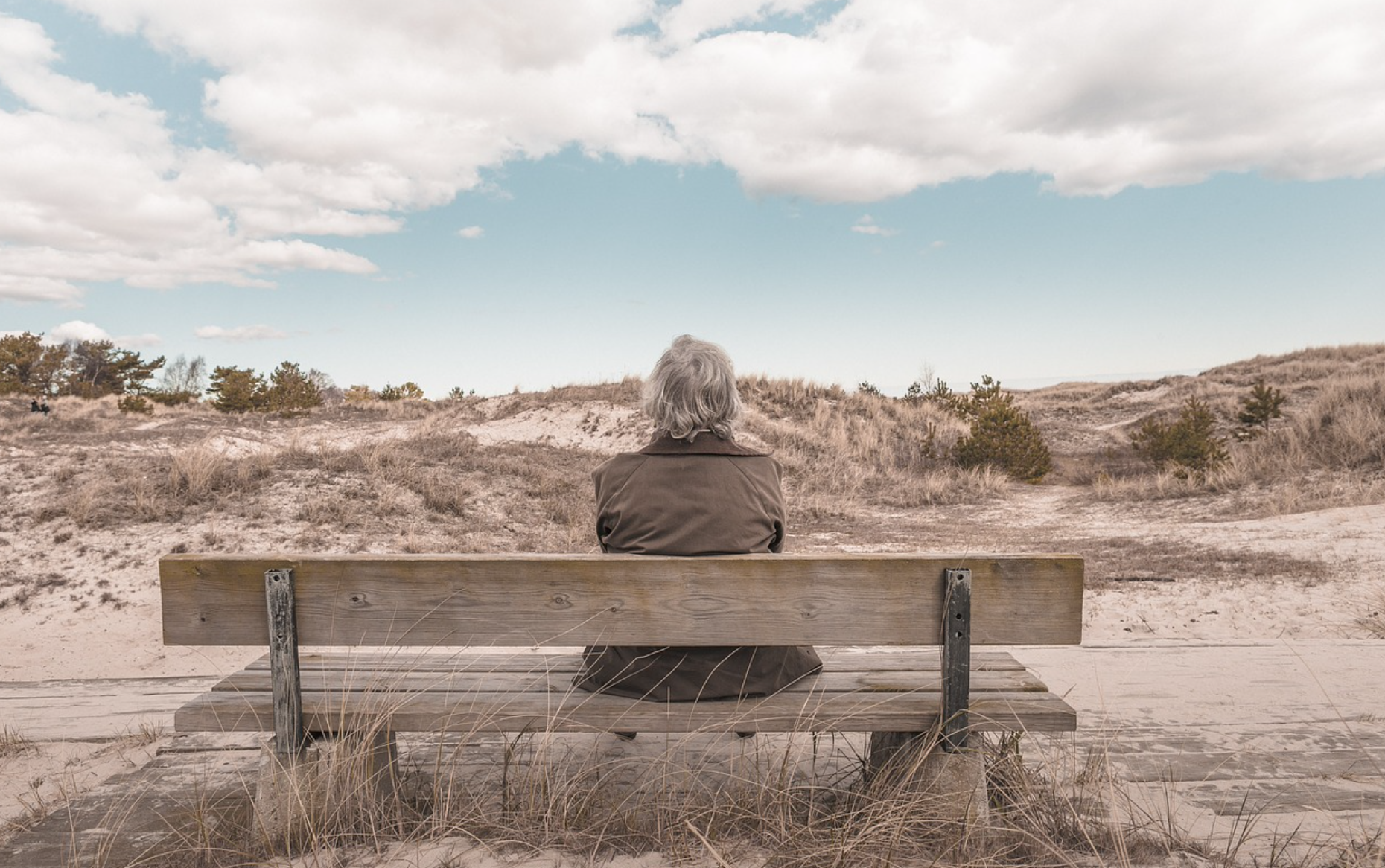 Yesterday Croakey highlighted some of the key asks from health stakeholder groups for the upcoming Federal Budget.

This submission involved a broad range of mental health stakeholders and focussed on addressing the current fragmentation and inequity in Australia’s approach to mental health care.

It includes five principles for mental health reform and identifies six key domains for action which provide a comprehensive framework for addressing the systemic problems affecting mental health in Australia.

About 12 months’ worth of work culminated on Monday this week when a submission was delivered to the Federal Government, outlining key priorities for the upcoming budget.

This work was initiated by the University of Sydney and the Australian National University but brought together key people across the mental health sector, including consumers, carers, health professionals, service providers, planners, researchers and others.

This work is complicated, for several reasons.

Mental health and suicide prevention are unhelpful catch-all terms.  They preclude the specificity necessary to plan and respond to the unique needs of individuals and communities.

It matters a lot about whether you are young or old, urban or rural, white or black, rich or poor. Australia lacks the sensitive terminology and data necessary to generate real understanding and effective responses to mental illness.

This situation has led to a piecemeal and fragmented approach to mental health care in this country.  From our initial failure to properly build the community mental health services needed to sustain de-institutionalisation in the 80s and 90s, our response to mental illness is split between federal and state governments (plus some private care). Role delineation is based on who pays, not what works.

In turn, this has generated widespread disillusionment.  Mental health professionals feel overwhelmed or blamed. Carers feel unsupported.  Some consumers now equate mental health care with harm rather than therapy. The front door to our mental health system is often the police and the Emergency Department.  Communities feel they cannot rely on the mental health system.

And of course, despite the regular announcements about new funding for services or programs, mental health’s share of overall health funding has barely shifted since 1992-93 when the national mental health strategy began.

Despite there being significant agreement across the diverse mental health sector, there has been no vigorous national campaign or strategy aiming to address this shortfall. Even where new spending has occurred, there is scant evidence it has helped lower the rate of mental illness.

This is the complicated environment into which COVID-19 has landed, driving new pressures on people, communities and the economy.

In late 2019, we invited a group of leaders from across the mental health sector together.  Two important papers were produced:

This paper demonstrated a new and powerful capability to model, predict and plan Australia’s future mental health needs. The model is being regularly updated as new Reserve Bank of Australia and Treasury outlooks for unemployment are revised. The latest results of these revisions can be provided on request.

Model outputs include calculating the impact to the economy of the projected downturn in our national Mental Wealth. The projected cumulative cost of lost productivity associated with psychological distress, hospitalisations, and suicide over the period March 2020 – March 2025 is estimated to be $114 billion, which includes $11.3 billion in lost productivity among the youth population.

In addition, over the next 5 years, the cumulative cost of mental health services is projected to be $51.6 billion, which is $874 million above what it would have been had the pandemic not occurred.

This paper set out some key principles which should guide longer term mental health reform:

Considering these principles, the paper then set out six key domains for action:

In September 2020, we called the group together again, aiming this time to identify the specific funding priorities necessary to fulfil twin goals: meeting the challenge of COVID-19 and its impact on Australia; and providing the framework necessary to drive longer term coherent mental health reform.

The group identified one key project under each of the six key domains, as shown below. 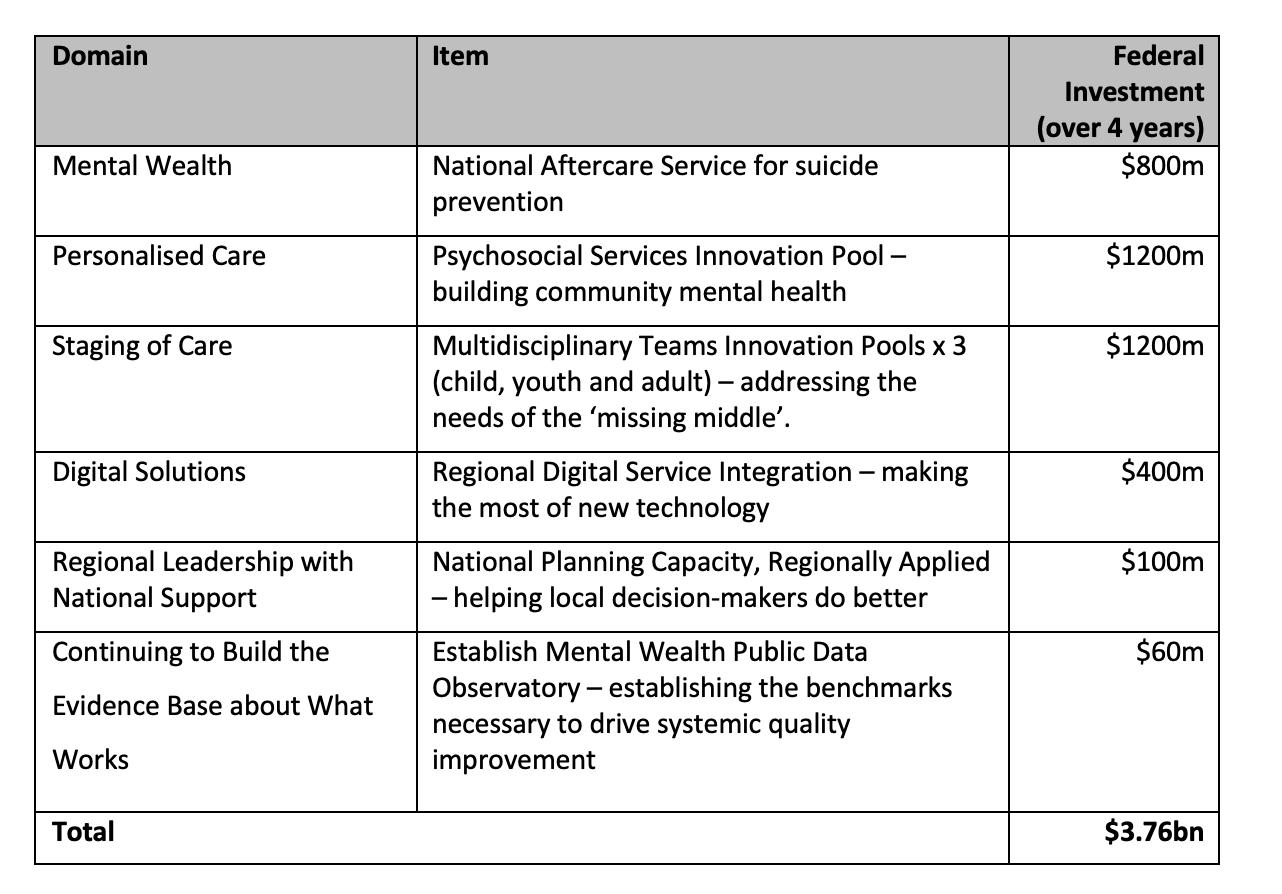 The group agreed to hark back to the first national mental health plan, perhaps the last one which demonstrably drove enduring change and reform in the mental health sector.

Key to its success was the deployment of pools of incentive funding, where the federal government agreed to provide the bulk of the funds necessary to drive reform, provided the states played their role.  In our mixed system, this remains key to effective, lasting change.

If they do this, overall new investment in mental health care should be in the order of $5bn over the next 4 years.

This investment must be sustained and grow into the future.  Just adding telehealth or more Medicare sessions will not address the systemic problems affecting mental health in Australia.

The complex context for mental health reform pre-dated COVID-19.  But now there is new urgency to the task.  The risks to people’s lives and welfare are real.

There is no time to waste.