Introduction by Croakey: Earlier this week the Federal Government announced it is providing 10 additional Medicare-subsidised psychological therapy sessions for Australians affected by the second wave of the COVID-19 pandemic.

The additional sessions are for people who have already used their initial 10 sessions through a Mental Health Treatment Plan, and who are:

This measure is in addition to previously announced funding to address the mental health impacts of the pandemic. This move was welcomed by mental health experts and stakeholder groups. 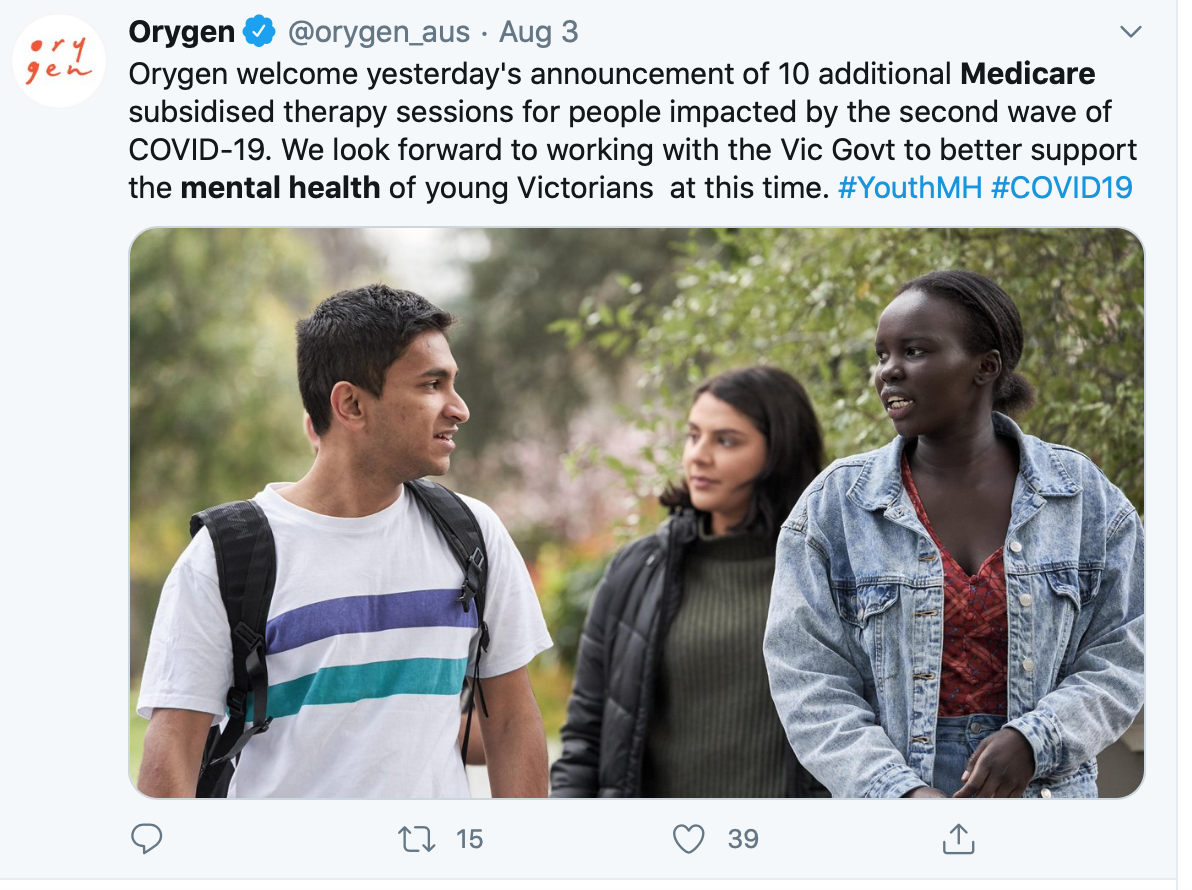 However, some experts also highlighted the need to consider other mental health strategies, such as scaling up digital mental health care and extending the telehealth measures. 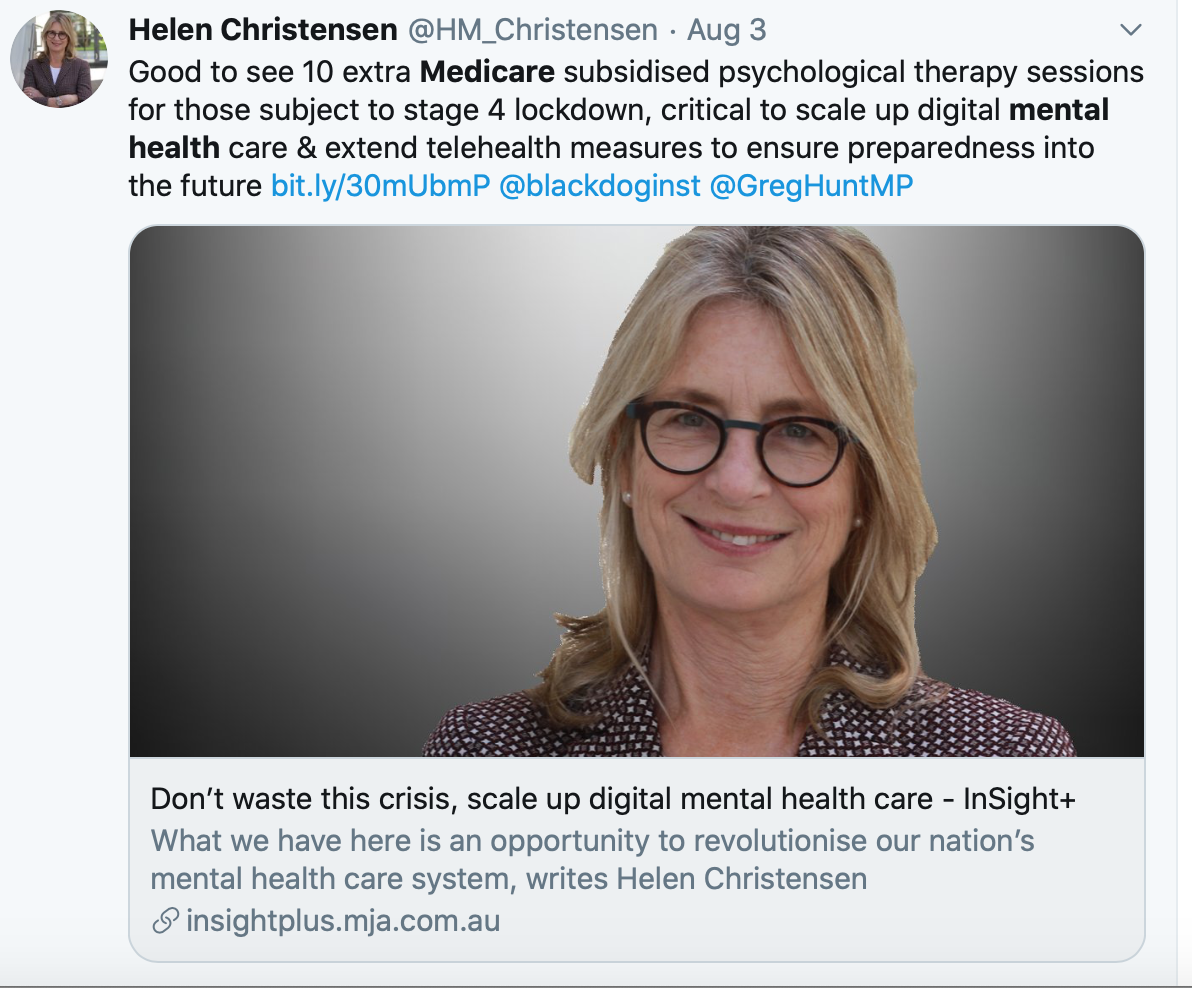 As the pandemic stretches into months and possibly years, it will be important for governments to address both the short term mental health needs of people affected by the lockdown and the longer term mental health impacts of social isolation, economic uncertainty and an ever present health threat.

Among the problems they have identified with the current system are access barriers, fragmented service provision and a lack of coordination across sectors and regions. They have also stressed the need to focus on social determinants, community cohesion and other non-medical aspects of mental well-being.

Below, Dr Rosenberg and Professor Hickie respond to renewed calls for expansion of Medicare mental health services and consider alternative approaches to meeting the mental health needs of the Australian community.

COVID-19 has reinforced the need in Australia for a new approach to address unmet community mental health needs.  Suggestions this can be achieved by simply extending existing fee for service arrangements, most notably via the Better Access Program, are misguided and inefficient. In the 21st century we really require a move away from 20th century thinking.

Where people have complex needs, the evidence indicates preferred models of care are collaborative, multidisciplinary and outcomes focused. Simply providing more occasions of service with a singleton health care provider does not result necessarily in improved outcomes.

By far the most expensive investment made in mental health in Australia over the past 20 years was the decision by the Howard Government to replace the 2001 Better Outcomes program (which first included allied health professionals under Commonwealth funding) with the Better Access Program began in November 2006.

As Australia now considers how best to manage the mental health impacts of COVID-19,  one suggestion is that these Medicare-based mental health services should be further expanded.  While sessions with psychologists and other allied health practitioners are currently limited to ten per year per client, the average number of reimbursed visits is less than five per client.

The Commonwealth government has already indicated its willingness to expand these rules. Clients with eating disorders are already eligible for up to forty sessions per year, following changes made recently.

Impetus for further expansion was supported by the 2019 Medicare Benefits Schedule review, where a committee stacked with psychologists, unsurprisingly recommended more psychology.

Having played key roles in the 2001 advocacy for Medicare-supported psychological services, the original design of Better Outcomes, and the ongoing evaluation of its impact, we need to clarify that we have always been strong supporters of publicly funded access to Medicare for psychologists and other allied health care under Medicare.

However, the original Better Outcomes Program was funded at around $50m annually where Better Access is costing close to $20m weekly.

The Government’s interest in mental health seems sincere, particularly in response to COVID-19.  They are looking for fundable actions that can be taken immediately.

Rules changes to Medicare fit that bill. They are simple to organise and totally within the remit of the Commonwealth.  There is no need for complicated partnership agreements.

The impact of rule changes to straightforward fee for service arrangements can also be easily estimated and budgeted. These changes would build on the eating disorders precedent and be strongly supported by the key professional groups.

The ease of administrative changes, however, does not make such actions desirable.

As shown in Figure 1 below, the popularity of the Better Access Program has grown largely unabated.

Although the rate of increase in Medicare services delivered by psychologists has slowed in recent years, they continued to increase despite the Commonwealth reducing the number of psychology sessions eligible for Medicare subsidy annually, from twelve to ten in 2011-12.

By contrast, GP-delivered services may now be limited by the number of practitioners available to deliver such care. 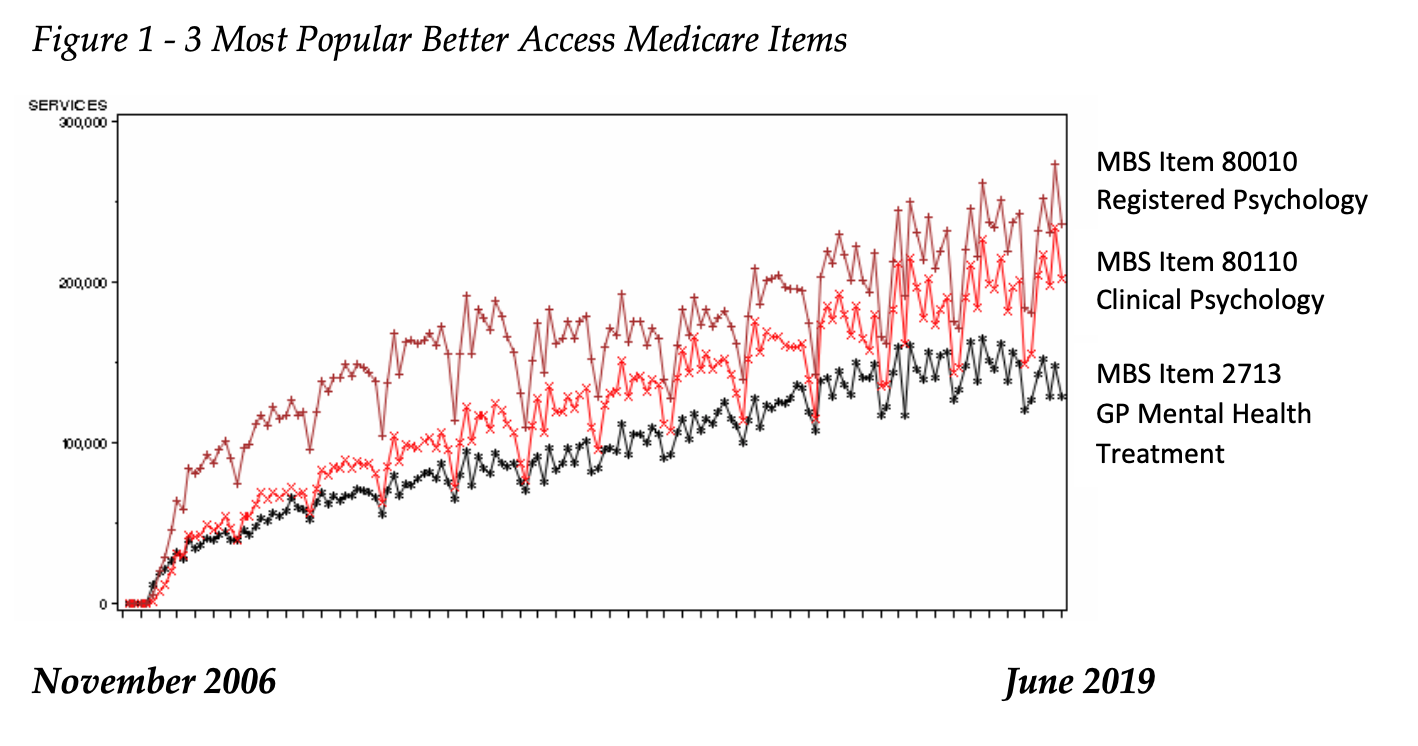 As an aside, while the increase in Medicare-funded psychology services for ‘clinical improvement’ is clear in Figure 1 above, it is worth noting a similar increase is likely also to be occurring, with the National Disability Insurance Scheme funding psychologists to provide services for ‘functional improvement’.

The initial design of Better Access was to provide short-term psychological support for those individuals with common anxiety or depressive disorders. 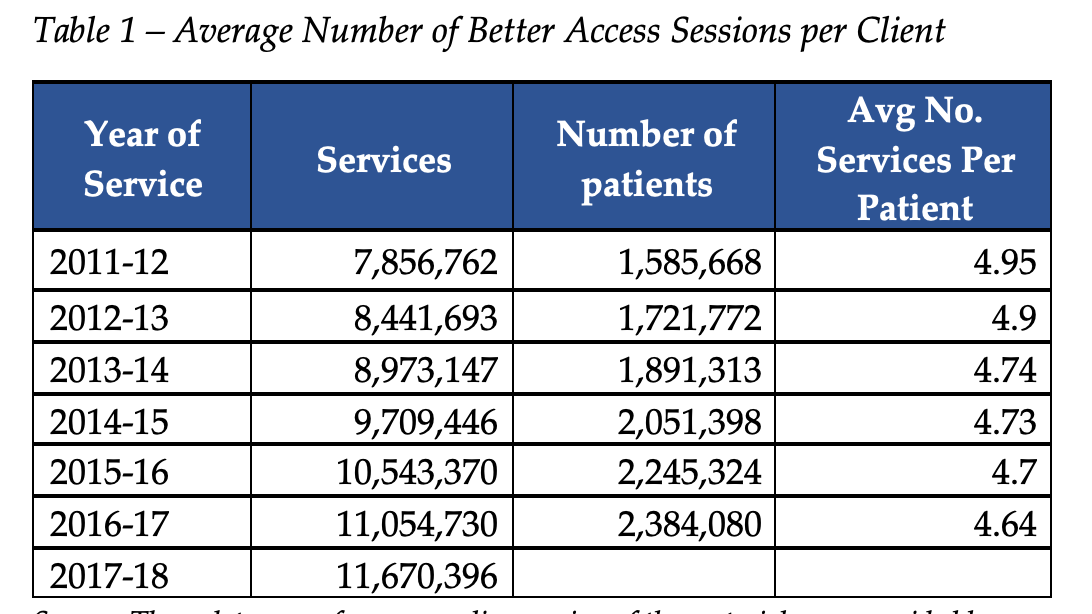 Source: These data came from an earlier version of the material now provided here

There seems little rationale to pursue an expensive broadening of Medicare when the data indicates most clients don’t use the services already available to them, and the average number of services used by people each year is in decline.

Should Better Outcomes be expanded?

Many psychologists assert that some of their clients are particularly complex and suffer because they hit an unhelpful annual service ceiling. The paucity of accountability data makes the validity of such claims impossible to verify.

However, it is surely worth asking whether, for a client whose situation has not much improved after ten sessions of psychology care, whether the right treatment is simply more psychology.

Where the presenting issues are genuinely complex, for example psychotic disorders, bipolar disorders, comorbid alcohol and other drug misuse, complex personality dysfunction, the evidence indicates the preferred treatment is best provided by a multidisciplinary collaborative team, rather than a single practitioner.

Psychologists are keen to ensure these complex clients do not miss out on the care they need.  But as stated, Better Access was never intended for clients with this level of complexity, a point we have made repeatedly and confirmed by other key supporters of the original program.

It should be remembered that the context for the Better Access Program was concern about stubbornly low rates of access to mental health care, as found during the 1997 and 2007 national surveys of mental health and wellbeing.

However, the data now suggest that this initial success in enhancing access to mental health care has ended.  The entry of new clients into the Better Access Program have in fact been on steady decline  as shown in Table 2 below. 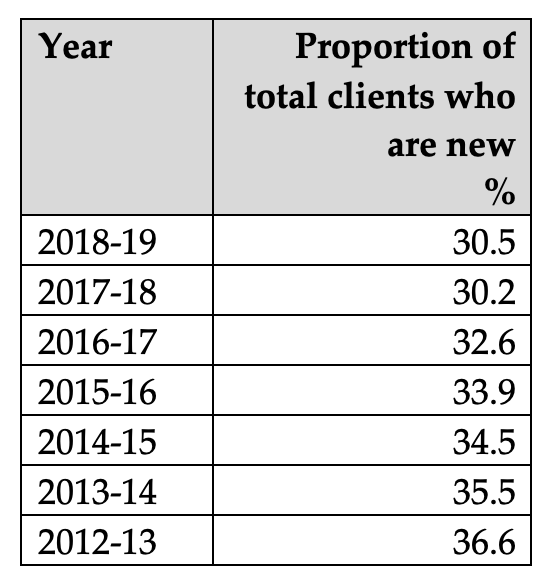 So more than two-thirds of Better Access clients in 2018-19 had used the service before. Did they not receive the care they needed the first time?

Were new clients deterred by waiting lists or high out of pocket costs? And if we assume relatively fixed workforce capacity too, then the twenty sessions that are currently delivered by an allied health practitioner to four clients, might instead be provided to just one client, leaving three others receiving no service.

If the Program is no longer delivering better access, what is it doing?  Medicare may be universal but it this does not mean it is fair, with access to care varying widely depending on whether you live in Campbelltown or Double Bay.

Evaluations of the Better Access Program have found that it did not provide care to key demographic groups, was inequitable, with far more services available in richer and urban areas than in poorer and non-urban and did not seem to affect the overall prevalence of mental illness in Australia.

An assessment of pharmaceutical benefits data also reveals that massive availability of access to talk therapies seems to have had only limited impact on rates of prescribing of common medications, such as anti-depressants.

A key element of the Better Access Program is the review, where the GP assesses client progress after the sessions of psychology care have been delivered. Under the original Better Outcomes Program this review was a mandatory element of the model of care, with health professional payments depending on this monitoring of client progress.

We have previously projected the spending impact of different growth scenarios. A program already costing around $1.2bn a year could easily become more like $5bn by the end of this decade. Like both the National Mental Health and Productivity Commissions, we strongly believe enhanced investment in this unaccountable and poorly targeted Program is inappropriate.

While we have focused on psychology and Better Access here, there are also important issues regarding the mental health care services provided by other professional groups under Medicare. Psychiatry has declined to adapt and adopt a leadership role in mental health reform.

Psychiatric work practices have remained largely unchanged over the past two decades and its services also remain largely unaccountable.

These functions remain pertinent. But, by and large, Australia has not advanced development of this GP role, leaving approaches like IT-based triage, standardized assessment and referral, efficient measurement-based care or complex care co-ordination sadly under-developed in relation to mental health.

COVID-19 has highlighted the fragility of Australia’s current response to mental illness. It also lays bare the richness of the opportunity to finally organise meaningful mental health reform. We need more than the usual reflex to tinker with Medicare.

More sessions to singleton practitioners may well suit health professionals but for the community, it represents very little added value to our national mental health response.

We need a new set of tools – services, technologies, funding mechanisms and accountabilities.