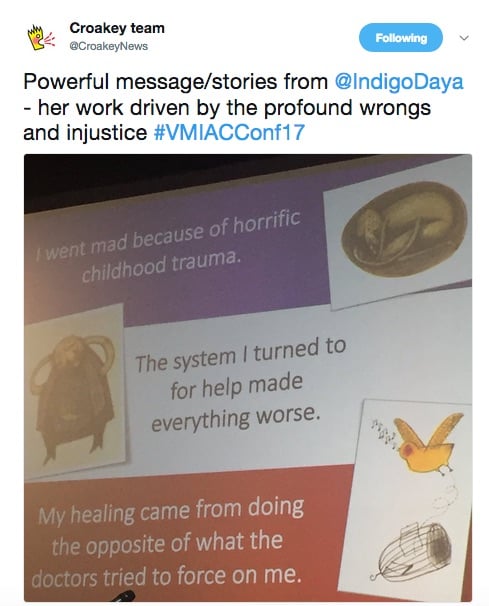 Mental health services are causing trauma, rather than healing

The mental health system continues to inflict trauma, violence and harm because it regards those it sets out to help as the ‘problem’ to be fixed, not the ‘customer’ it serves.

That’s the assessment of leading Victorian mental health policy adviser Indigo Daya, a survivor of childhood trauma and a former compulsory patient of mental health services, after years of working in mental health consumer roles and in government.

Daya, who is Senior Consumer Advisor in the Office of the Chief Psychiatrist in Victoria and a long-time consumer and human rights advocate, was a keynote speaker at the recent Victorian Mental Illness Awareness Council (VMIAC) conference in Melbourne.

She said a big challenge for the consumer movement is that the system still sees the general public as its ‘customer’ and its aims to be about public safety and a sound economy, rather than the health and recovery of the people it treats. (See her slides below.)

“I thought…we’d been strong in delivering messages about what’s not okay, about the ways in which the system hurts us, fails to acknowledge trauma and abuse, the ways the system is violent and strips us of our rights, about those of us who end up worse off after experiencing services that are supposed to help us,” she later told Croakey.

“But what I’ve learnt in recent years is that those messages haven’t got through in the places they need to and that needs to inform our work, how we move forward.”

Seeing how the system works in terms of ‘customer’, ‘problem’ and ‘provider’ also helps to explain why consumers remain the least influential voice in the sector, way behind psychiatrists, the nursing union, and carer and family advocacy groups, she said.

“I think the ‘customer’ is the general public and we’re actually the problem that the system’s trying to fix,” she said.

“So that makes sense to me about why we’re not listened to: why would you listen to a problem, you’re just trying to fix it or get rid of it or contain it or control it.” 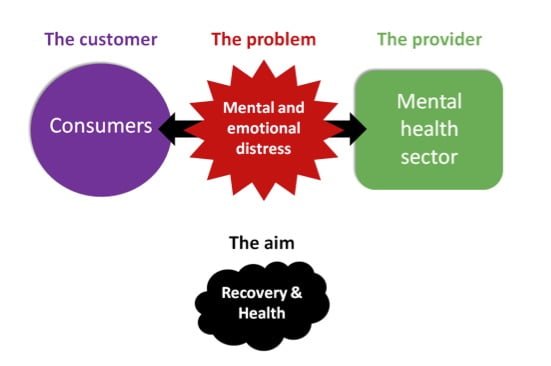 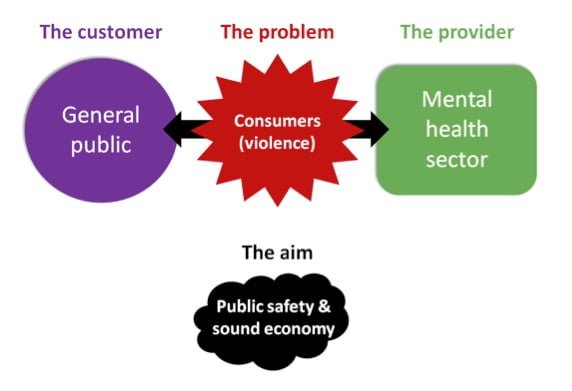 “We need a trauma system”

Like many other consumers, Daya prefers to talk about ‘madness’ rather than ‘mental illness’.

She was diagnosed with schizophrenia and borderline personality disorder, but she told the conference it was only after years of damaging interactions with the mental health system that she understood she “experienced madness” because of trauma and abuse in her childhood.

At her much-read blog and in other publications, she has written that there were so many lost opportunities for mental health clinicians to ask about her childhood trauma and offer counseling services and peer support that could have helped.

Instead, Daya said, she was subject to forced treatment that caused further harm.

“As a person living with madness”, she learnt that the system she turned to for help made things worse.

She only healed after peer support and trauma therapy helped to make sense of her experiences. This was despite a hospital psychiatrist who tried to prevent her from doing trauma therapy.

Daya acknowledged that this is not the story for everyone but said health professionals who talk about evidence-based treatments should recognise they don’t work for everyone.

Her experience, however, drives her focus on the impact of trauma on mental health.

Talking about evidence that between half and three-quarters of psychiatric inpatients had been either physically or sexually abused as children, Daya said she had been stunned to learn that experiencing multiple childhood traumas appears to give about the same risk of developing psychosis as smoking does for developing lung cancer.

Trauma was incredibly common and yet really not addressed or understood in the services that are there to help those affected by it, she said.

“I think we have to question the whole foundation of pathologising human experience and calling sadness and fear and shame and anger ‘illnesses’,” she said.

“For me we don’t need a mental illness system or a mental health system. We need a trauma system and we need a human system and an emotional system and a justice system that serves what people need, with no force whatsoever.”

She shared a quote from Professor Louise Newman, psychiatrist and Director of the Centre for Developmental Psychiatry and Psychology at Monash University that:

Failure to acknowledge the reality of trauma and abuse in the lives of children, and the long-term impact this can have in the lives of adults, is one of the most significant clinical and moral deficits of current mental health approaches.” 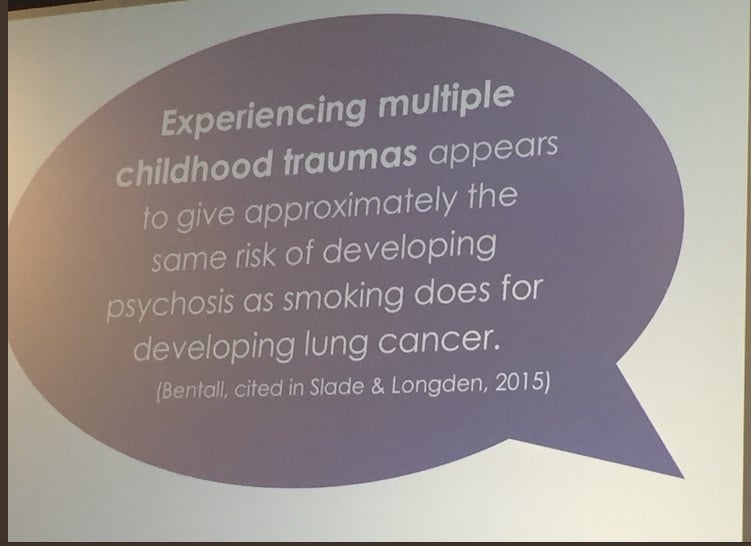 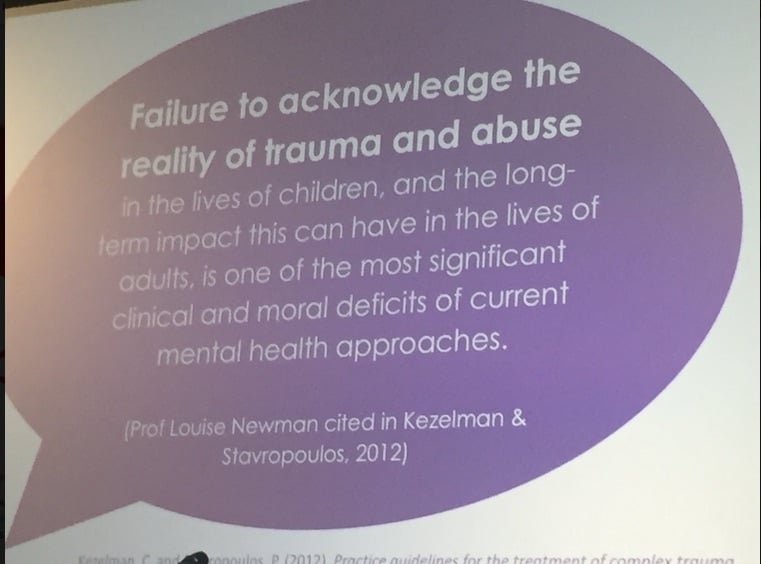 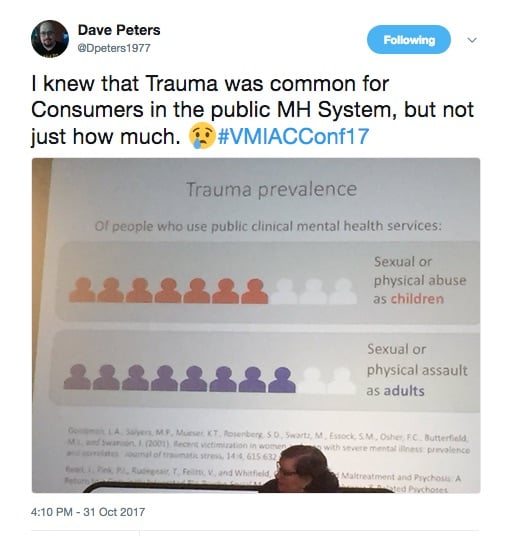 Daya also spoke about the big challenges facing mental health consumers in the workforce, not least that many often have to revisit trauma on a daily basis, in her case from her childhood and also from her compulsory treatment.

That came home graphically for her at a recent psychiatric conference in Europe where – right next to the morning tea and coffee each day – was a commercial display of restraints, complete with posters of them in action. 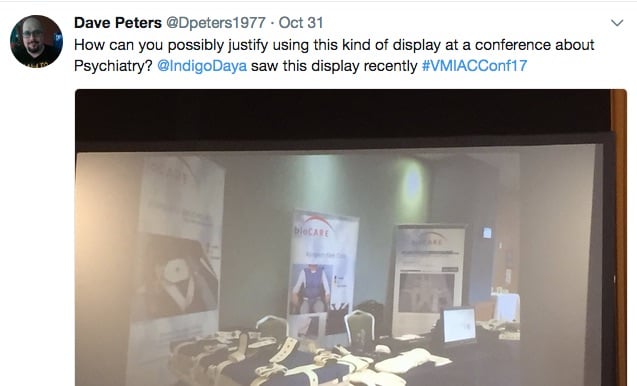 She was also dismayed by the approach of the conference itself.

Organised on the theme of ‘violence in clinical psychiatry’, she said it was focused “almost entirely about when people like myself might be violent, rather than… that the system itself is actually violent, a system that uses force, coercion, threats and restraints and treatments that have stripped away our cognitive ability and our memories…”

But she said there were many other barriers to consumer participation in the mental health workforce, on multiple levels: 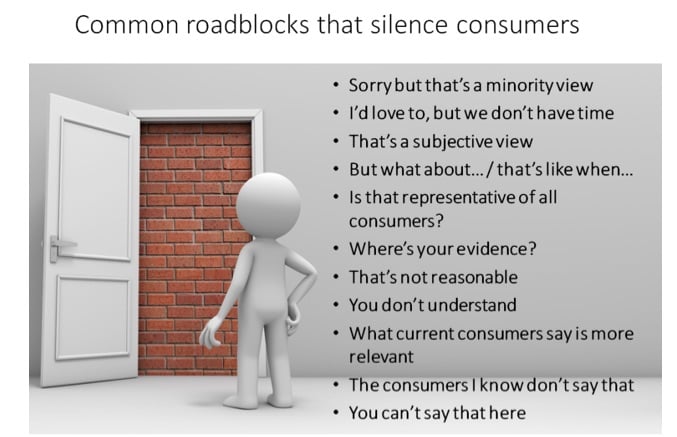 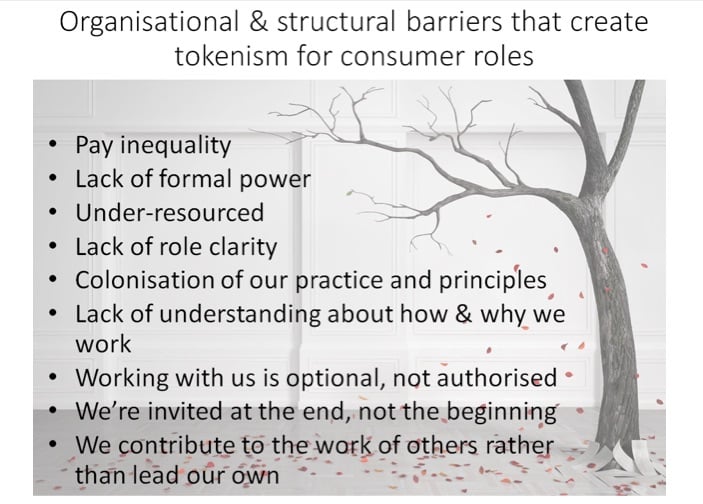 Consumers also face a series of “emotional safety barriers” in their work, whether they work in policy, research or service delivery, she said.

These include isolation – often being the only consumer in a team or organisation, of having everyday work issues pathologised, and having to make impossible choices about what issue to take up or leave behind, for fear of being seen too ‘whingeing’.”

It all adds up to a mental health consumer movement that, she says, remains “decades behind” other rights movements in being granted a strong voice.

That’s in part, perhaps, because people with mental health issues are still “perceived as mad… and potentially dangerous”, she said – illustrating her point with a range of media images, from the Teen Wolf TV series to health warnings about the dangers of ice.

But it is also because of a “profound lack of understanding about our experience”.

“People have to know that this system hurts at least as many people as it might help… that we violate people’s rights on a daily basis in thousands of different ways.”

That’s not done with malevolence by the people who work in the system, she said, but often by good people with good intent, which “makes it a bit harder for those people though to hear the message that their work is doing harm”. 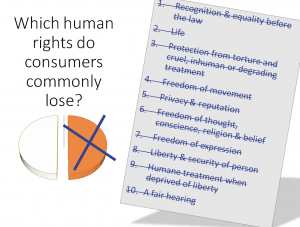 “Some people struggle with the word ‘oppression’ but we have some of the greatest, most wide-reaching rights violations,” she said, showing a slide describing how more than half of the 20 rights spelt out in the Victorian Charter of Human Rights and Responsibilities are breached regularly in mental health treatment.

“We don’t just struggle for loss of liberty, we can potentially lose our thoughts, the ability to think, to feel emotions… potentially lose memories, our possessions, our friends,” she said.

“It is no small thing we struggle with.”

See her slideshow here.  And read her writing: The blog that shouldn’t be written. 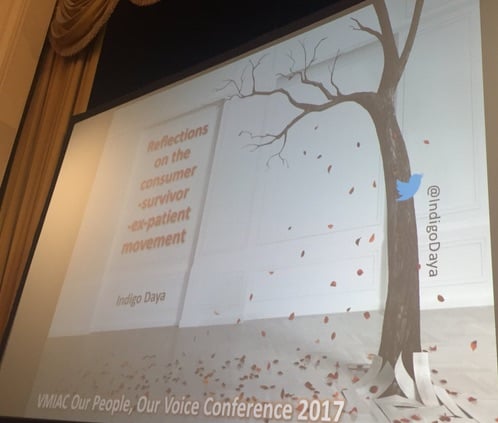 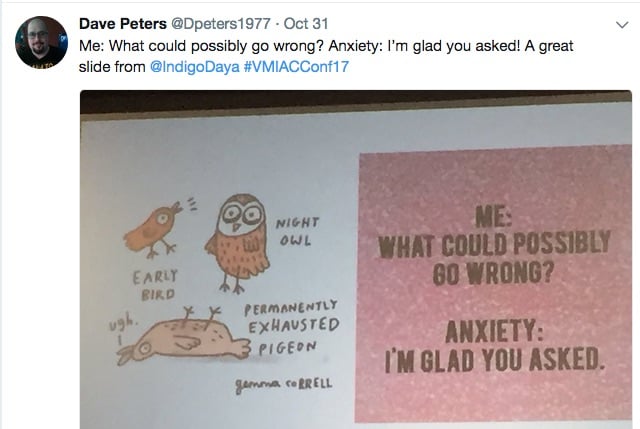 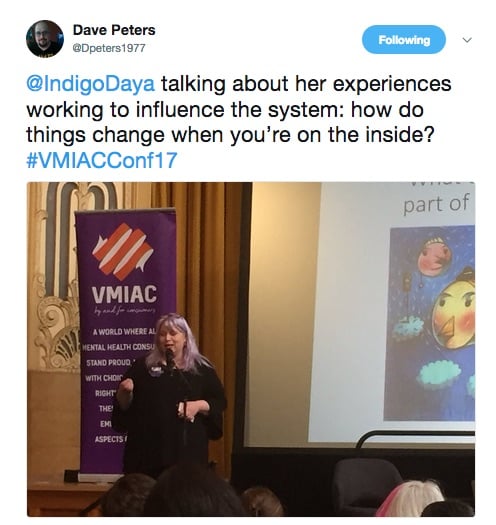 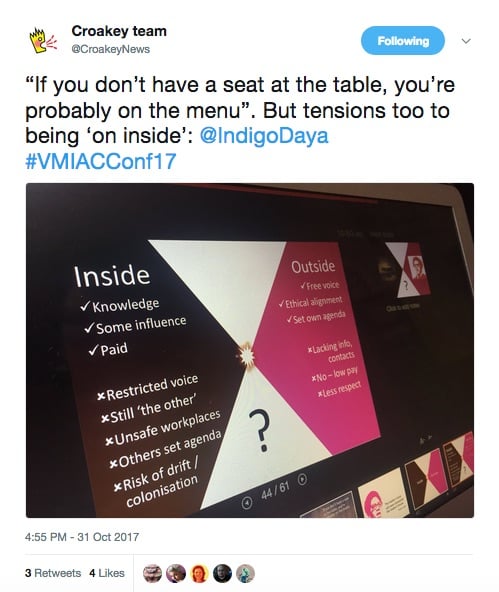 PrevPrevious“We have become refugees for a second time in this hellhole”: fears for health, wellbeing at Manus
Next“Keep a copy of the Uluru Statement, share it, talk about it, understand it. It is history in the making”Next