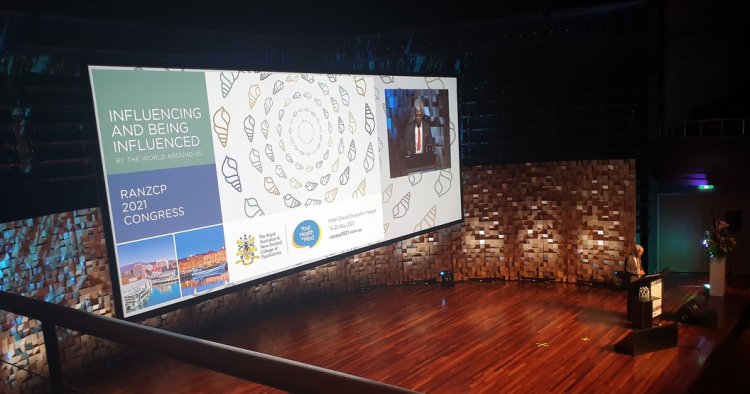 The rising harm of hate speech on mental health and society was centre-stage on the opening day of the Royal Australian and New Zealand College of Psychiatrists’ 2021 Congress, which is bringing together psychiatrists and other mental health specialists from the two countries for four days of discussions in Hobart.

Noting that psychiatrists see daily the harrowing consequences of hate speech in their work, keynote speaker University of Queensland Professor Katharine Gelber said both individuals and institutions had a responsibility to call it out and to hold to account politicians and social media giants for their complicity.

Gelber said that, while the pendulum has swung in favour of untrammelled free speech, it is both possible and imperative for groups like the RANZCP to help restate norms and speak in support of human rights, as Croakey journalist Dr Amy Coopes reports below.

Coopes is covering the Congress for the Croakey Conference News Service here. You can bookmark her stories here.

See also live Twitter coverage of the event, including the opening sessions and ten key quotes on other issues covered during Day 1 via @CroakeyNews aka Croakey editor Jennifer Doggett.

In an era dominated by populist politics and social media behemoths whose business models are built on stoking negative emotions, there has been a marked rise in hate speech, at great cost to individuals, minority communities and our democracy.

That was the message from a stirring keynote at the opening session of this week’s annual Congress of the Royal Australian and New Zealand College of Psychiatrists, which is one of the first large-scale medical specialty meetings to be held in Australia since the outbreak of COVID-19.

The hybrid virtual and face-to-face Congress, themed ‘Influencing and Being Influenced by the World Around Us’, officially opened to some 800 in-person attendees in Hobart on Monday, with hundreds more delegates tuning in online from across the two nations.

It’s the first time in two years the College has been able to gather, with the coronavirus pandemic derailing last year’s proceedings, and President John Allan paid tribute to the tireless efforts of fellows and members in helping steer Australia through the unprecedented challenges of 2020.

While the pandemic had shown the power and potential of communal action, it had also been a time of isolation for many, and heightened divisions and social tensions, with reports across the globe of hate crimes targeting people of Asian descent, stoked in not-insignificant part by figures like US President Donald Trump, he said.

In one of the opening presentations at the Congress, Professor Katharine Gelber from the University of Queensland reflected on the rise of hate speech and its insidious impacts on psychological health and the social fabric.

Gelber, who is Head of UQ’s School of Political Science and International Studies, told delegates that a combination of populist Trump-era politics and social media hegemony had seen a steep erosion of norms in recent years, with a permissiveness around expressing certain views that would have been unthinkable even five years ago.

There had been a mainstreaming of hate speech into modern political discourse by mercenary populist leaders who had seen electoral gain in stirring animosity and division, eagerly abetted by social media platforms whose business model was predicated on hate-clicks, said Gelber.

The costs were disproportionately borne by minority groups, with flow-on effects to cohesion and democracy. 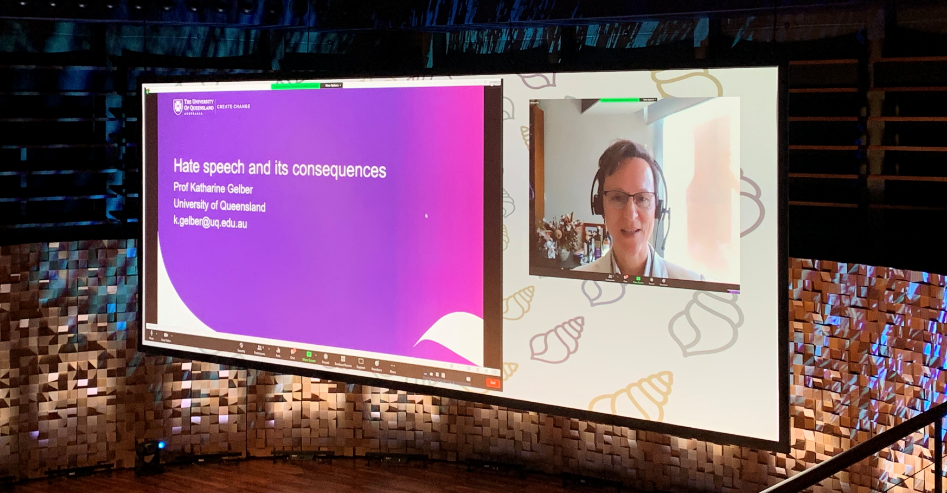 Gelber said hate speech could harm in two ways: causally, by precipitating an act of discrimination, violence or loss of liberty, or constitutively, having such an effect merely by being spoken. Describing a particular person or group as inferior or legitimising their denigration, such as was presently being seen in dehumanising discourses around Palestinians and Gaza, was an example of the latter.

Regardless of which ways that harm was caused, Gelber said hate speech had empirically established effects.

She cited research showing it scared and disempowered its targets, leading to withdrawal, exclusion and loss of liberties, and alienating people from their own culture, language and way of life.

It had a “long, slow, cumulative effect” on marginalised peoples’ ability to express themselves, or belief they would be heard, and was a double-edged sword where fighting back invited further repercussions but repression also had consequences for people’s mental health.

“These are non-trivial, very significant harms,” said Gelber, outlining how hate speech normalised and drove discrimination, subordination, silencing, victimisation, restriction of freedom and loss of dignity. “It resets the implied rules by which public discourse happens.”

Delivering her address on the International Day Against Homophobia, Transphobia and Biphobia (IDAHOBIT), Gelber talked about a growing global movement of hate speech targeting trans people, and the “existential pain” of being deliberately misgendered.

Both mainstream and social media organisations played a role in this process, perpetuating tropes, fuelling stereotypes and planting seeds of contempt, Gelber said. Equally, she said, both escaped recourse for these actions.

Likening the responsibility of digital platforms to the builders of civil infrastructure like a bridge, Gelber said it was not enough to simply provide the space and accept no ownership for the consequences of it failing. She called for social media giants like Facebook to have a statutory duty of care, to be broken up into smaller, locally-accountable entities, and to face greater regulation.

Gelber described current moderation attempts, driven by algorithms and enforced by a paltry corps of staff using a one-size-fits-all reference, as doomed to fail, given that defining hate speech relied to a large extent on local context.

Instead, Gelber said the speed, anonymity and echo chambers of social media had allowed hate speech to flourish and greatly expanded the scope for targets to feel its repercussions – at school, in the workplace, in public, and even in the privacy of their own homes.

Gelber also rounded on the political class, who bore a greater responsibility given their profile and influence to ensure their free speech did not impinge on the rights of others but had decided, in significant numbers, to eschew this responsibility for short-term gain. Whole groups were excluded and discouraged from participating in democratic processes as a result, she said.

She called on individuals and institutions to step up on the issue, saying that calling out hate speech and humanising those it targeted were key to countering the toxic effects, along with ‘pro-social’ campaigns like New Zealand’s Give Nothing to Racism or Australia’s Racism: It Stops With Me, which she said served as a reminder of what agreed community standards were.

#RANZCP2021 continues in Hobart. Follow Croakey’s @coopesdetat and @croakeynews for the latest coverage and bookmark this page for our stories from the event. 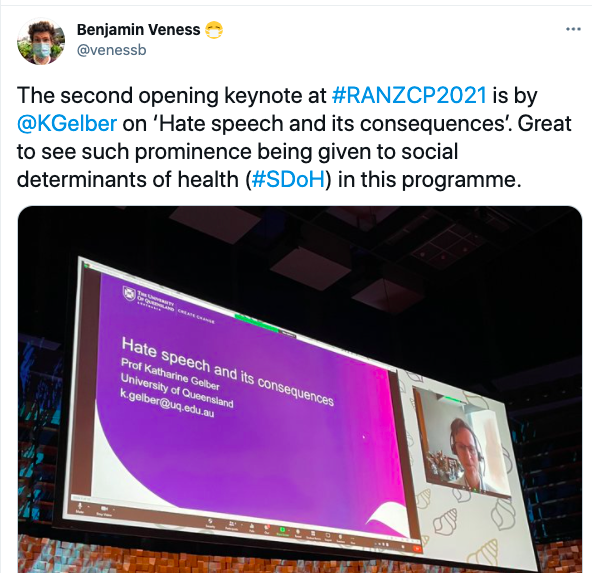 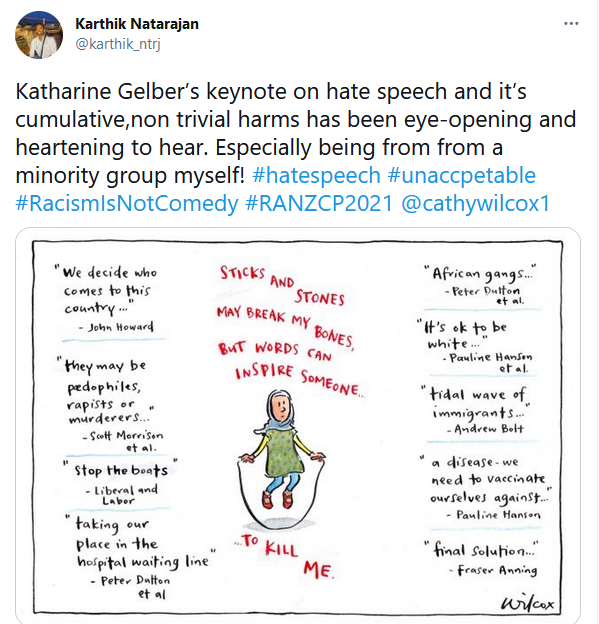 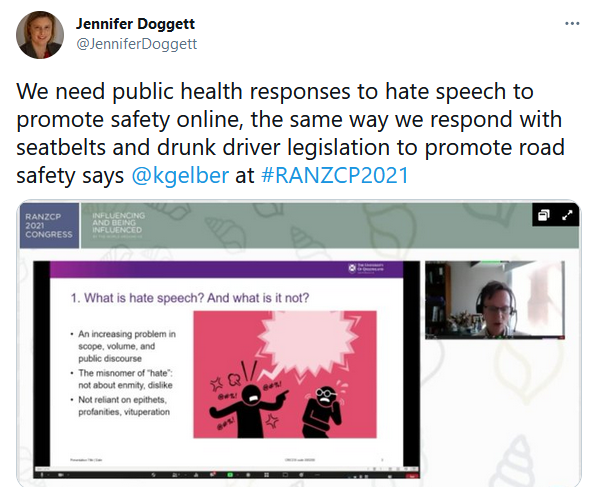 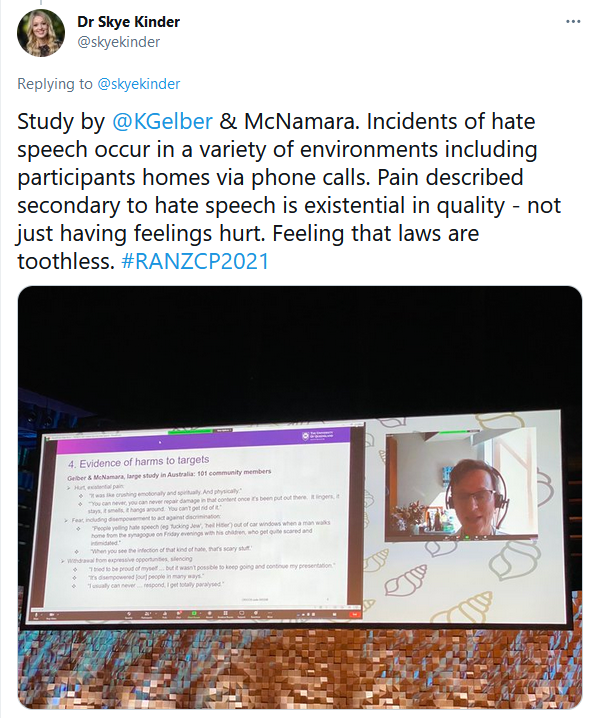 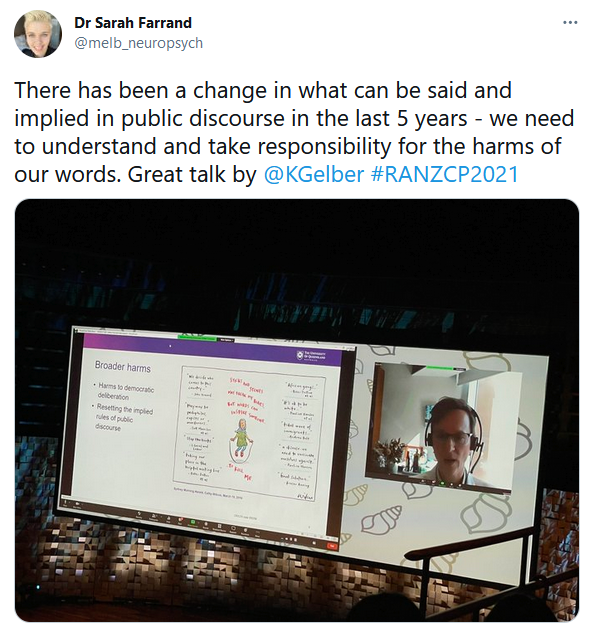 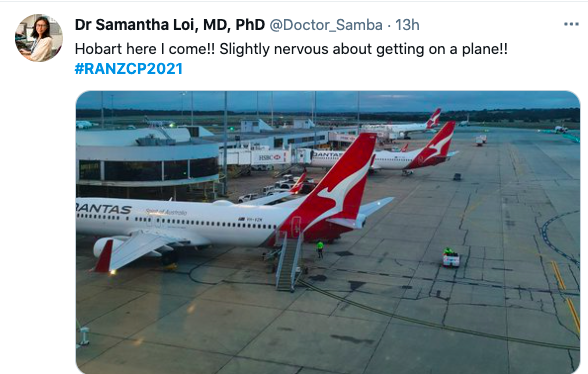 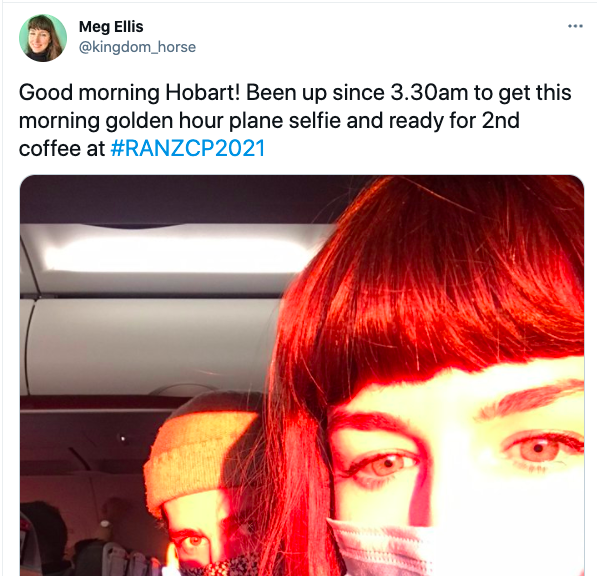 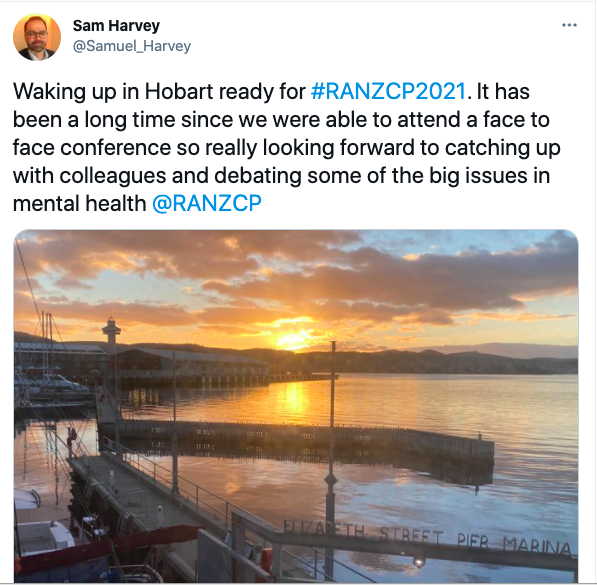 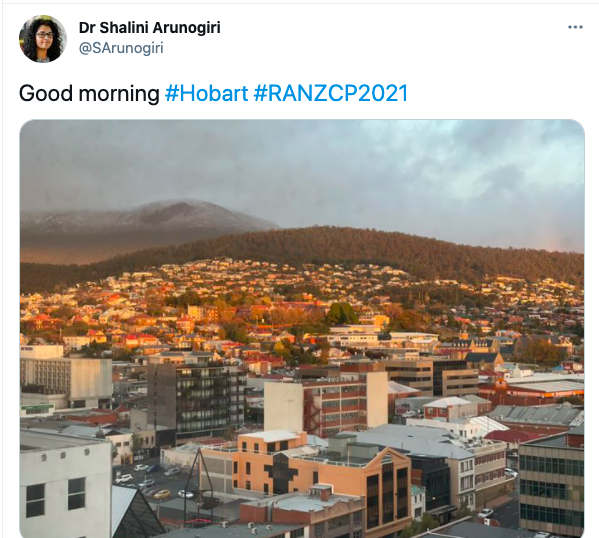 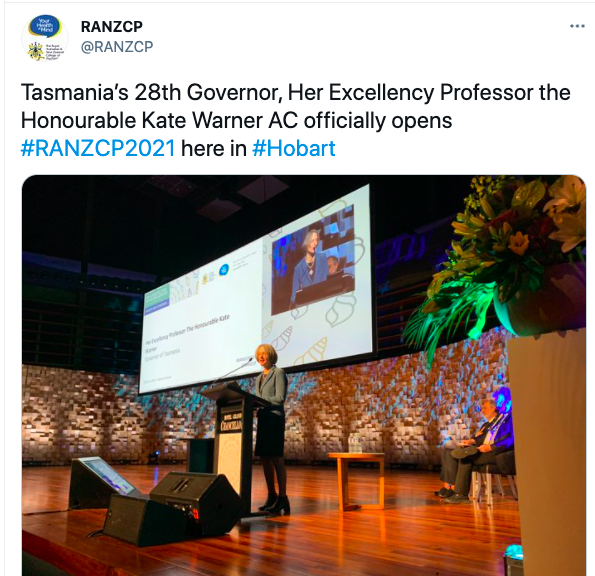 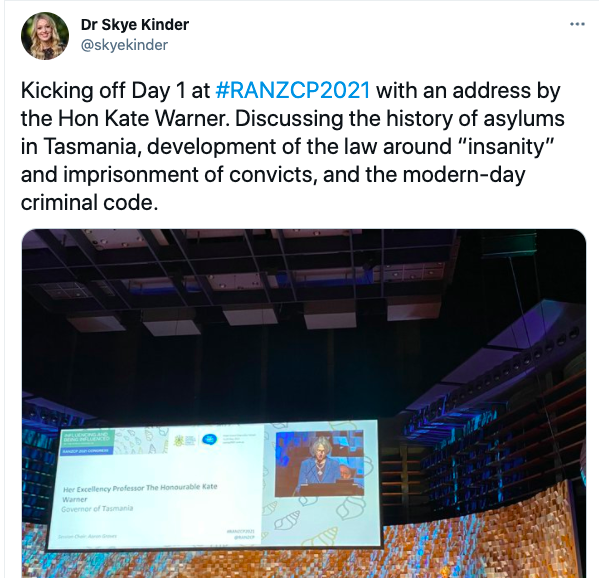 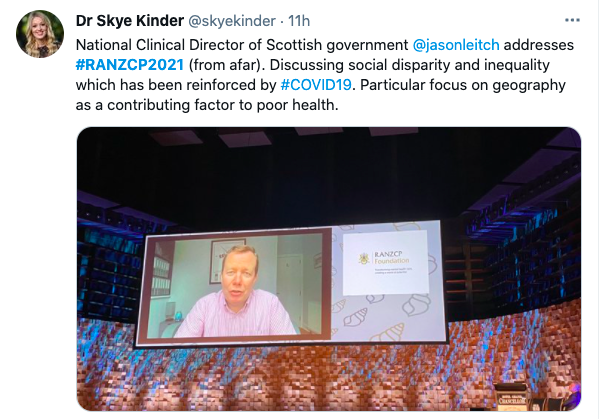 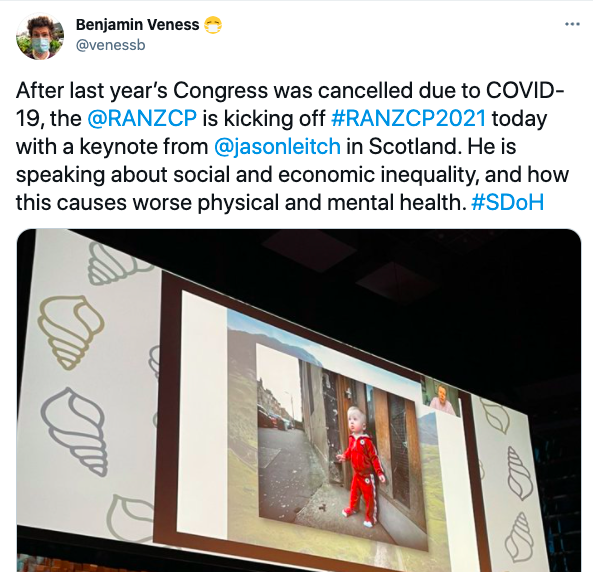 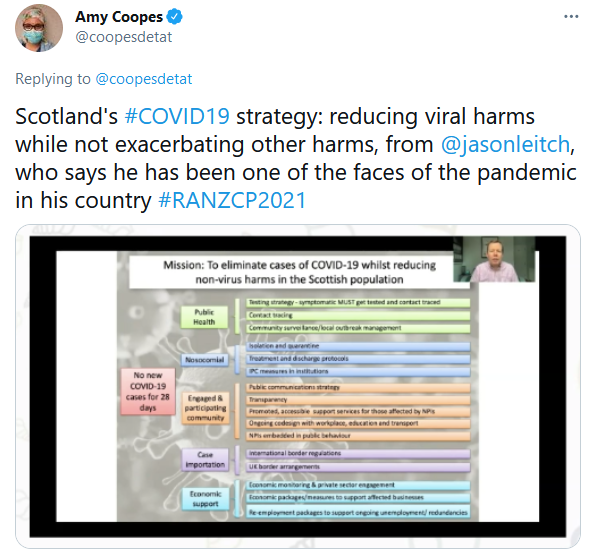 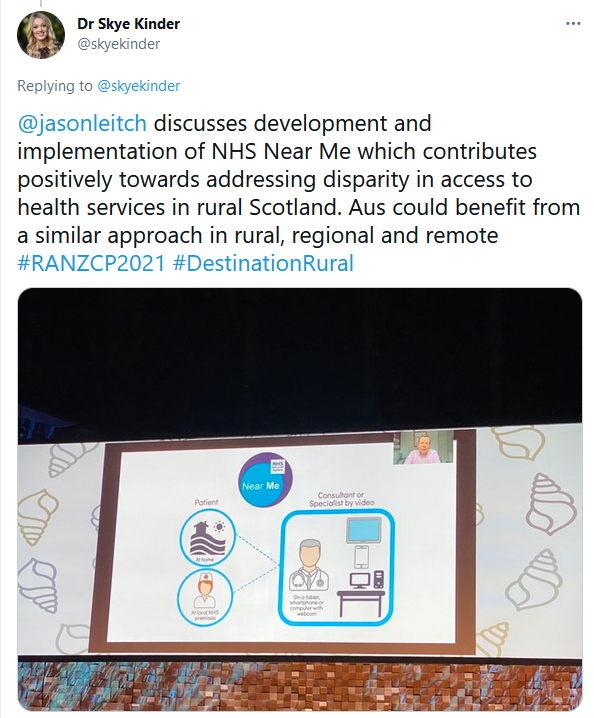