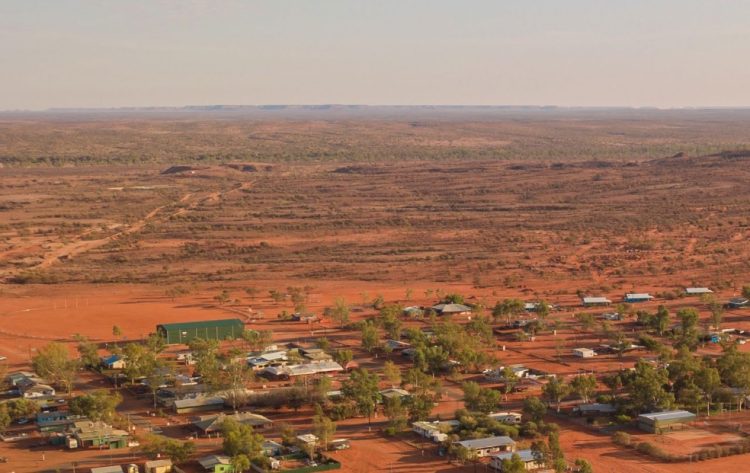 Message to Territorians: don’t throw petrol on the fire, vote for climate action this Saturday

With the Northern Territory election only days away, leading Aboriginal health, public health, and other community groups have released an election briefing paper calling for urgent action on extreme heat and climate change.

Voters should support candidates who commit to ending fossil fuel extraction in the NT, and a managed transition to an economy based on renewable energy, says Dr Rosalie Schultz, an Alice Springs-based GP and member of the Climate and Health Alliance NT group.

The NT Government’s plan to develop new gas fields while offsetting the resulting emissions is “like trying to put a fire out with petrol”, she says.

Extreme heat is a critical health issue for Territorians, and its effects on our health are only worsening with global warming.

As a doctor working and living in Alice Springs, I am very conscious of the impacts of extreme heat on people’s lives and health.

Some people may experience heatwaves as unpleasant or inconvenient, while for others – particularly the elderly – extended exposure to extreme heat can send them to the emergency room, or even the morgue.

In 2019, the average temperature in the Northern Territory was 1.5°C above the long-term average. Heating trends are expected to accelerate and temperatures around the world are rising, fuelled by increasing levels of greenhouse gas emissions.

If we do not dramatically cut emissions, average temperatures could soar to 4°C above historic temperatures by the year 2100. Many communities throughout the Territory would be unliveable. And many Territorians would lose their lives.

It is clear that climate change is a health emergency, and urgent action must be taken now.

As Territorians head to the polls this Saturday to vote for their next government, I encourage people to vote for representatives who commit to climate action to protect our health.

This means voting for candidates who commit to ending fossil fuel extraction in the NT, and a managed transition to an economy based on renewable energy, not dependent on the burning and exploitation of fossil fuels.

This transition will create new jobs and help us to avoid the most catastrophic health impacts of climate change. In fact, in so many ways, climate action is good for health, so there is much to be gained through acting on climate change.

However, the NT Government’s recent report, Climate Change Response: Towards 2050 misses the opportunity to adequately do this. Alarmingly, it proposes to reach net-zero emissions by 2050 through manipulation and deception, rather than transformational changes in renewables and energy efficiency.

Their plan to develop new gas fields while offsetting the resulting emissions is like trying to put a fire out with petrol. We must urgently reduce emissions in all areas as quickly as possible – not reduce some emissions here only to increase others over there.

The healthcare sector, responsible for about seven percent of Australia’s emissions, should lead by example in cutting emissions. There are opportunities to reduce the carbon footprint of healthcare, which also cut costs – resulting in fewer emissions and more money for providing care.

We urge all candidates to commit to establishing a Health Sector Sustainability Unit in the Territory, to provide leadership to improve sustainability and drive decarbonisation within the health sector as an example for the entire economy.

We also urge candidates to commit to supporting Territory hospitals and healthcare service providers to make the most of the Global Green and Healthy Hospital Pacific network, which assists health services in reducing their emissions and adopting sustainable healthcare.

Like most health professionals, I am deeply concerned about the NT Government’s current approach to climate change and the threats it poses to our health. That’s why we wrote the Northern Territory Election Briefing: Heat, Climate Change, Health and the Need for Urgent Action, laying out a path to a healthier and safer future.

This briefing and its policy recommendations were supported by a coalition of health and social groups, including the NT Council of Social Services, Jesuit Social Services, and the Climate and Health Alliance. It was sent to all NT Election candidates, and we’re encouraged by some of the conversations it has already initiated.

As you vote, I encourage all Territorians to vote with their health and climate action front of mind.

Dr Rosalie Schultz, an Alice Springs-based GP and member of the Climate and Health Alliance NT group, is also the Chair of the Central Australian Rural Practitioners Association and a spokesperson for NT Branch of the Public Health Association of Australia.

See also: As the NT election approaches, this is a critical health threat in search of political will, by Deborah Di Natale, CEO of the Northern Territory Council of Social Service. 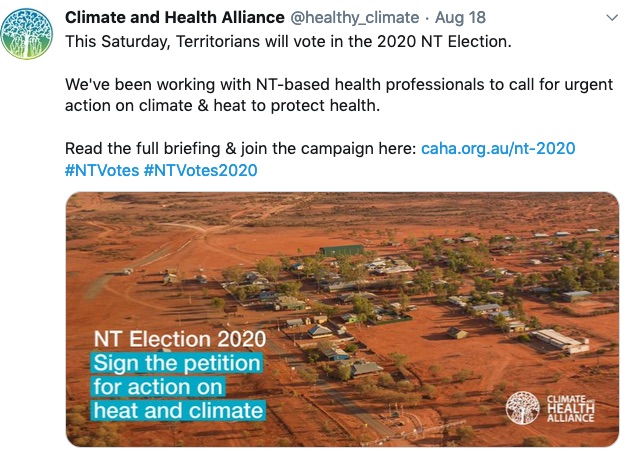 PrevPreviousInstitutional racism, the media, and a complaint to the Press Council
NextBreaking down the barriers to careNext