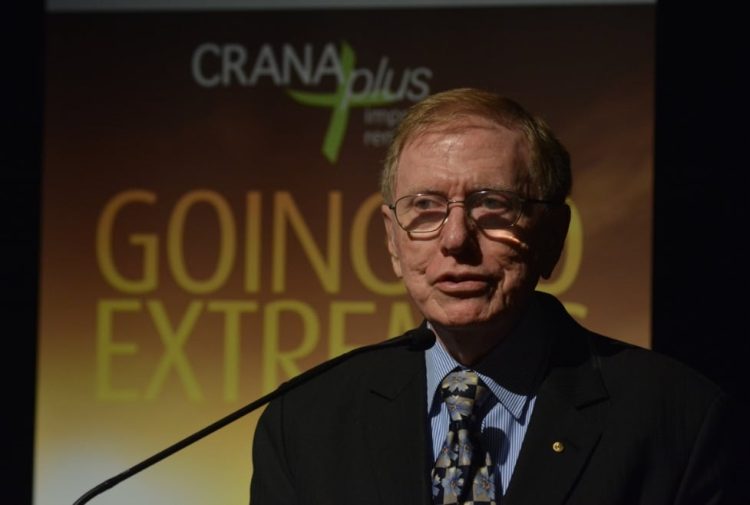 The Hon Michael Kirby: "It is hurtful"

At the 34th annual CRANAplus conference in Hobart last week, a Former High Court judge, the Hon Michael Kirby, shared some insights into the personal impacts of the Government’s planned plebiscite on marriage equality.

The plebiscite now appears to be “dead in the water” in the wake of Labor’s decision not to support it – a move welcomed by the NSW president of the AMA, Professor Brad Fankum.

In contrast to the lack of advocacy from Federal AMA leadership, Professor Fankum said if the plebiscite had gone ahead, it “had the strong potential” to do more harm than good, in causing significant mental health harms for same-sex attracted people.

Meanwhile, other pressing human rights issues were also put on the CRANAplus agenda by Michael Kirby, as Rosemary Cadden reports below (and beneath her story, see a splash of photos and tweet-reports from #CRANAPlus2016).

Former High Court judge the Hon Michael Kirby says he and his partner are hurt by the proposal for a plebiscite on marriage equality.

“It is hurtful because it is singling gay people out,” he said.

“To impose this plebiscite on gay people is an extra step in the legislative process. We didn’t do that for land rights, for women’s rights, getting rid of the White Australia policy.

“And let’s be clear. The proposal wasn’t done by people who wanted to crack the bottle of champagne and join in the celebration with us. It was to try and stymie the achievement.”

Kirby is patron of CRANAplus, Australia’s peak professional body for the country’s remote and isolated health workforce, and was a keynote speaker at the 34th annual conference.

“It is important to try to explain why LGBTI people feel hurt,” he told delegates. “My partner and I have been together for 47 years.

Mr Kirby commented on media reports and Letters to the Editor he has read on the topic.

“While we are told that the majority of Australians support marriage equality, very few of those letters are in support,” he said.

“Rather, they are full of hate. It is rather sad that people have feelings of hatred towards a relationship – in my case a relationship that has lasted 47 years.

“If two people can live together and put up with each other, that’s a good thing for society. If someone has someone to go home to, or pick up from a medical appointment – then you are a lucky person. It’s good for your health.”

Commenting on the current Royal Commission into the Protection and Detention of Children in the Northern Territory, Mr Kirby said media reports of the conditions in some communities was “a horrible thought for us Australians to think about and to reflect upon”.

“There is no point in talking about North Korea if we don’t think about human rights violations in our own country,” he said.

“Successive governments have been trying to change this – somehow we haven’t found the solutions – and it behoves us all to consider what we as citizens can do, and what leaders can do,” he said.

He deplored the over-representation of Aboriginal and Torres Strait Islander people in the prison system.

“I always make a point of respecting the local Indigenous communities when I speak – but there is no point is talking about respecting Elders if we aren’t doing anything about issues such as housing, health and education.

“It is a challenge for us – I am not criticising any particular group – just saying this is something we have to address.

“I hope the Royal Commission brings that change. Housing, health and education: unless you address those things, you are going to have continuing problems.”

Kirby added: “May I say that the deprivation of Indigenous land rights was not fixed up by Parliament – it was fixed up by the High Court. It was an important step in righting the wrongs.

“Sometimes a bit of activism is required.” 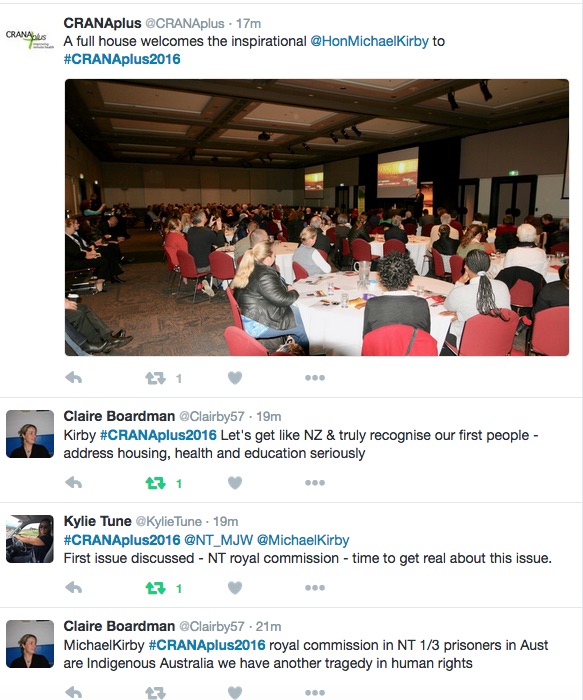 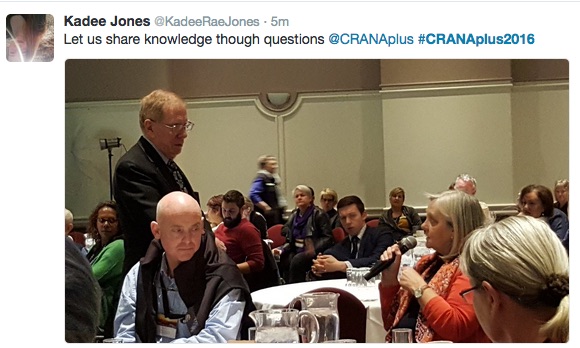 Thanks Rosey Boehm for sharing her photographs with Croakey readers. 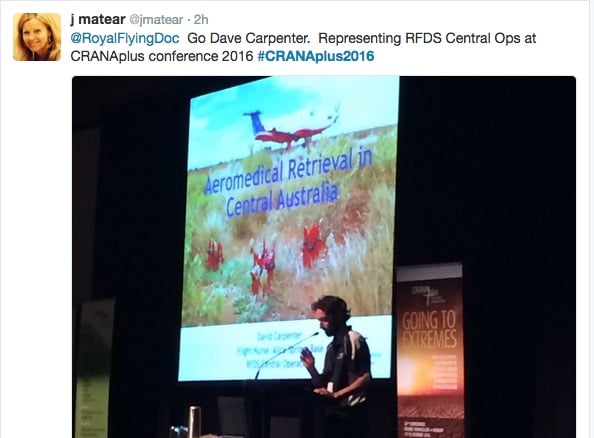 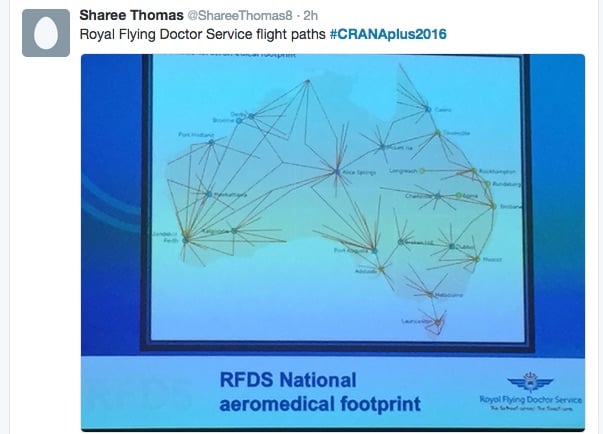 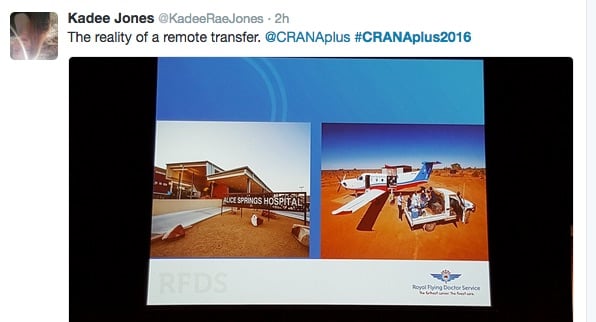 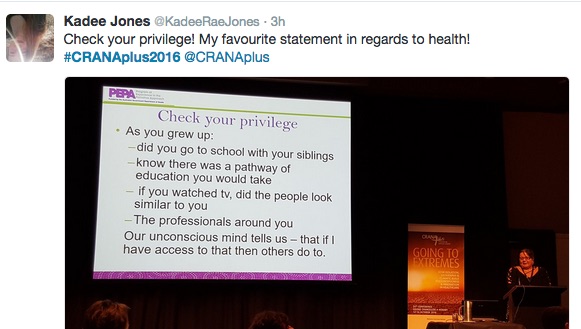 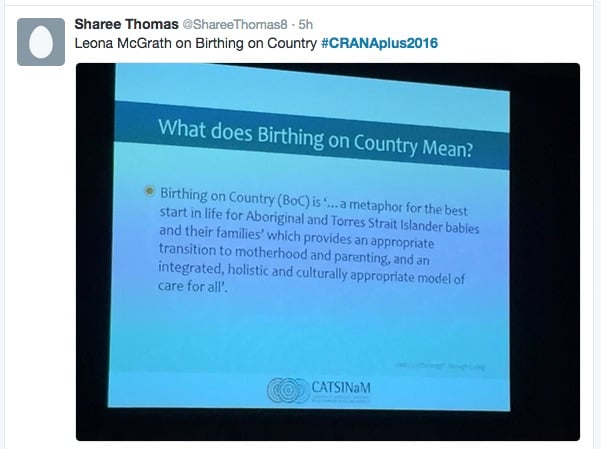 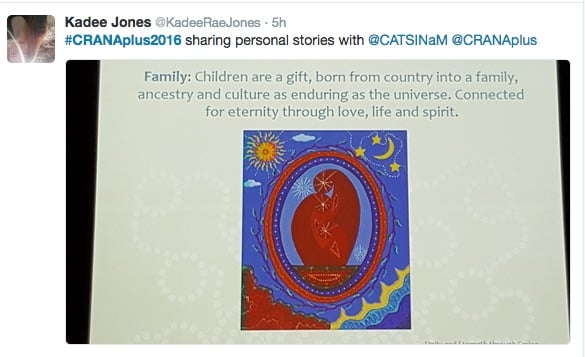 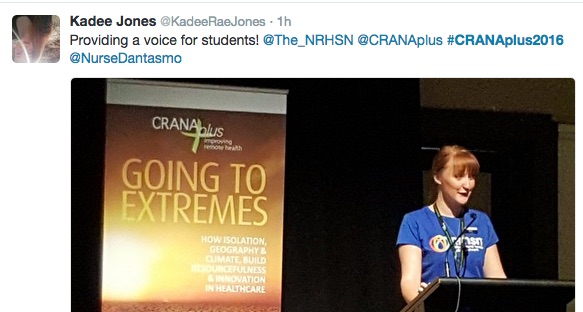 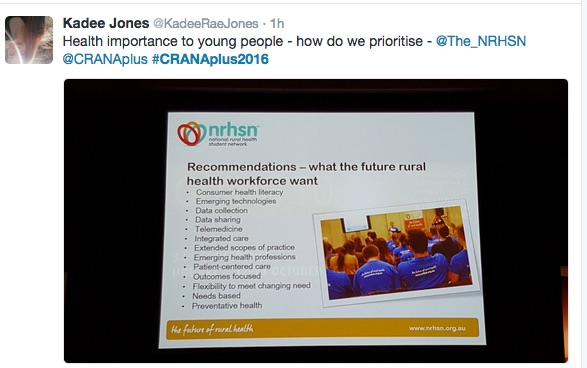 Workplace safety: the power of one (and many)

As previewed at Croakey, the panel discussion on workforce safety issues was much-anticipated. 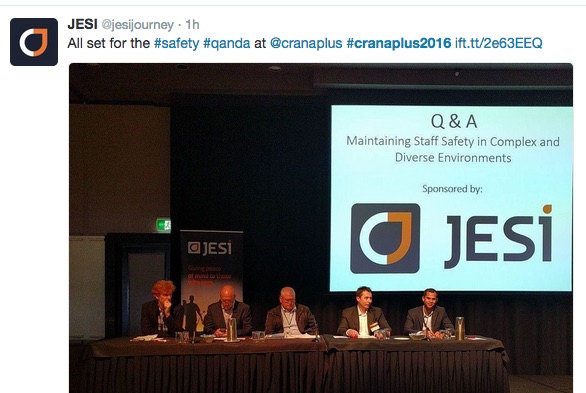 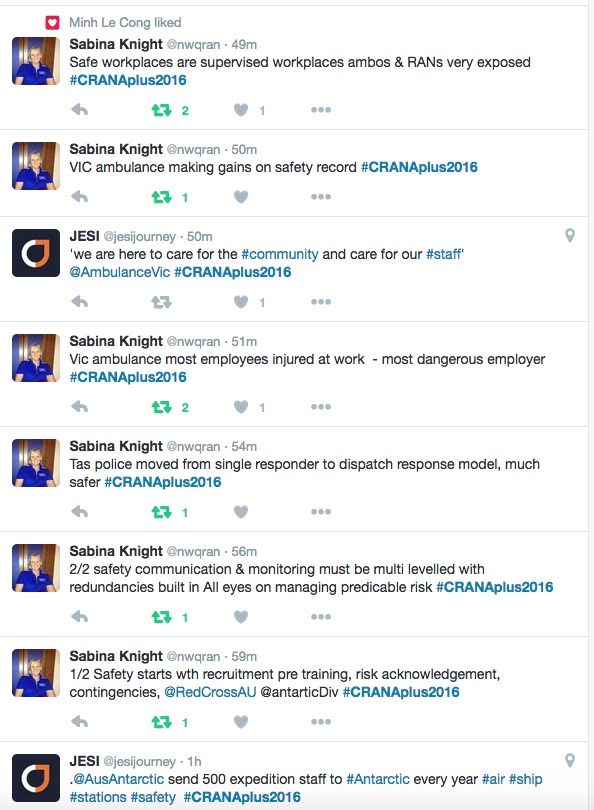 Selfies and more news from the Twittershpere 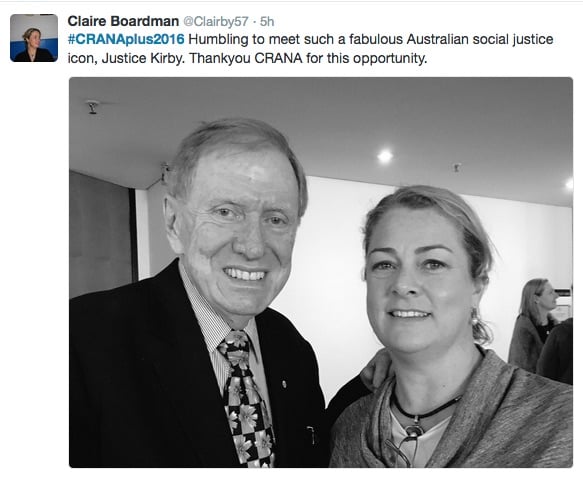 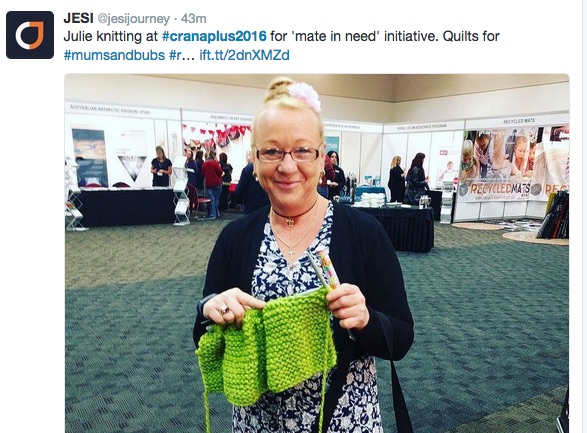 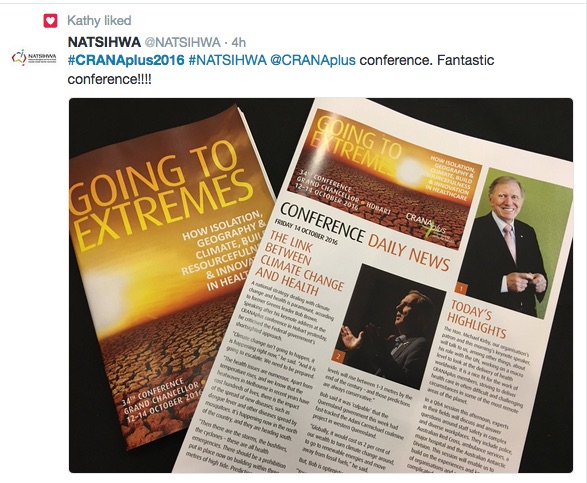 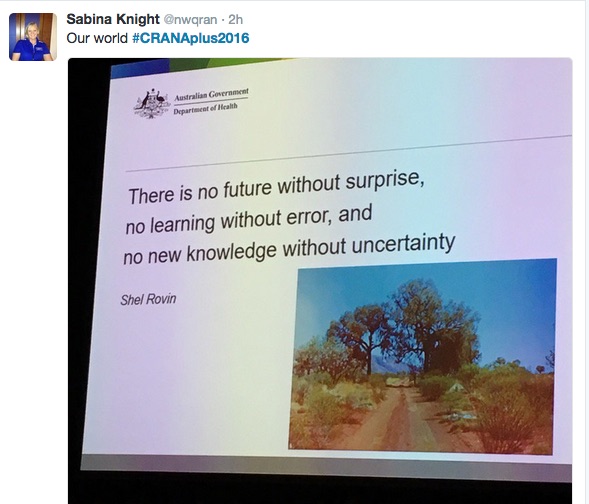 • You can see all the conference coverage at this link. https://croakey.org/category/croakey-news-and-projects/croakey-conference-news-service/cranaplus2016/ 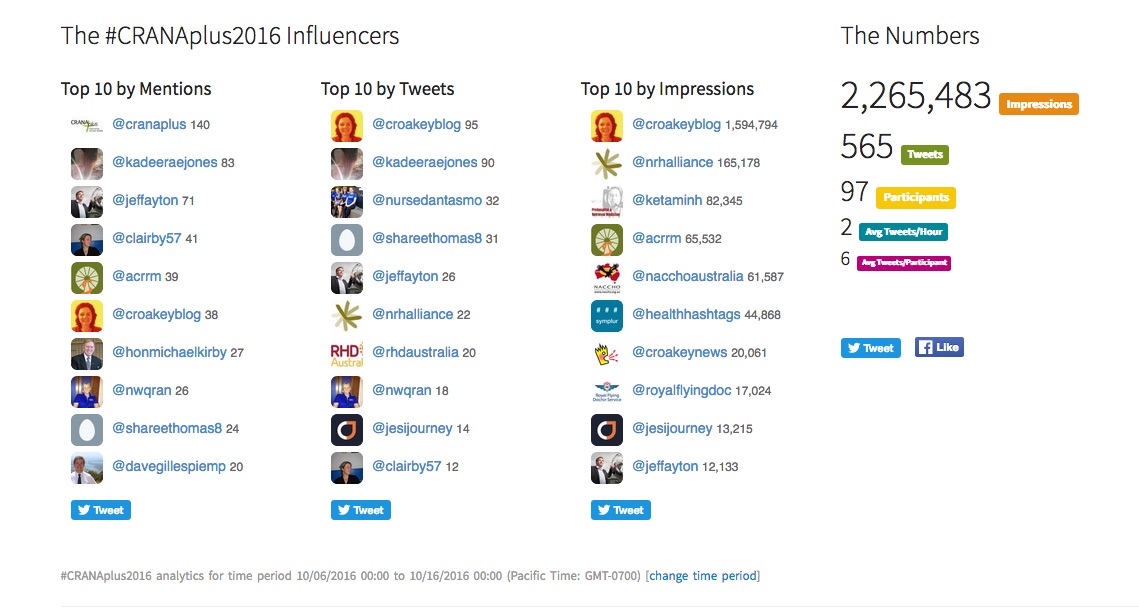 Privileging the voices of people with lived experiences of addiction

PrevPreviousMelting the ice in remote health care – and other reports from CRANAplus2016
NextJustJustice LongRead: “The indignities that led to Ms Dhu’s death are the same indignities her family now face”Next