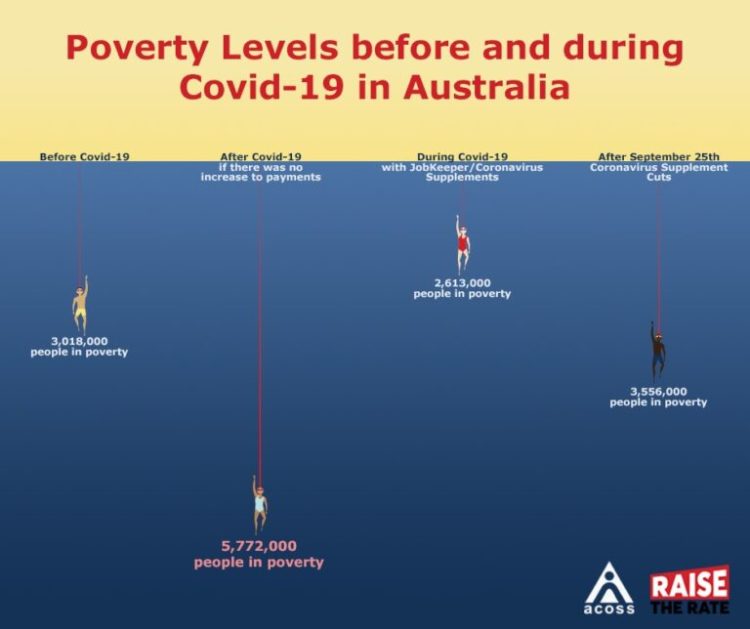 From the ACOSS #RaiseTheRateForGood campaign resources

Miserly JobSeeker rise will push more into poverty and ill-health

Leading health and community organisations have slammed the Federal Government’s “heartless betrayal” of people relying on JobSeeker after it announced a permanent lift in the rate of just $25 a week — way short of the $25 a day rise that was being urged.

The Australian Council of Social Service (ACOSS), which has been leading the #RaiseTheRate campaign backed by multiple community and health groups, said the Government had “turned its back” on those with the least, “plunging people further into poverty”.

Those most at risk included children, single parents, people with disability, older people, students, people dealing with illness and injury, and others relying on income support, it said.

“It’s a cruel decision that shows a complete lack of humanity and empathy,” said ACOSS CEO Dr Cassandra Goldie who has been  urging a rise to $65 a day.

Yet despite much evidence of the positive impact of the higher rate that had been paid since March 2020, for individuals and for poverty levels and housing stress, and the proven deadly side effects of austerity measures, the Prime Minister and two supporting Ministers were barely tested by media on the decision at their announcement today.

Goldie said that, already, with the rate still at $51 a day with the temporary Coronavirus Supplement, people on JobSeeker are being forced to make impossible decisions, choosing between housing, food, medications, basic toiletries and paying bills.

“Now, come the end of next month, they are expected to struggle on even less – just $44 a day to cover the essentials of life, including rent, as well as the cost of job searching,” she said, noting that there is currently only one job available for every nine people looking.

Also urging the Government to set the rate at $65 a day, the Consumers Health Forum of Australia said Australians had accepted the good sense of a substantial public investment in income support during the height of COVID-19 concern “and the validity of those concerns remains as strong as ever”.

CHF CEO Leanne Wells said the pandemic has increased inequality by significantly reducing earnings among the lower half of household income earners. Average weekly wages in the industries most affected by the pandemic and lockdowns were less than half of those in the least affected industries. Women, young people and people on income support are over-represented in this cohort, she said.

“In our submission on the Federal Budget, we point out that Australia has the lowest rate of unemployment payments in the OECD and the evidence shows that the payments are not adequate to meet the costs of housing, food, basic healthcare, and transport,” she said.

“This means that people relying on these payments are living in poverty and increased risk of untreated ill-health. Is that what Australians really want for fellow Australians?”

The Public Health Association of Australia said the higher rate of coronavirus supplement paid in 2020 had shown the difference that a decent income could make in people’s lives, able to buy fresh fruit and vegetables, pay bills and afford essential medical and health treatments, often for the first time.

It said it strongly supports the ‘Raise the Rate for Good’ campaign because of the powerful role of social determinants in influencing population health outcomes.

“We cannot knowingly and willingly plunge people back into poverty and the sickness that comes with it,” he said, noting that people living in the lowest socioeconomic areas of Australia are more likely than others to have poor diets, chronic conditions such as diabetes, uncontrolled high blood pressure, and to die prematurely.

As a recent report by Good Shepherd Australia New Zealand outlined, JobSeeker (previously known as the Newstart Allowance) had not had an increase in real terms in over 25 years and was well below the poverty line, despite ongoing advocacy by the community services sector and support for an increase from many economists, even the Reserve Bank Governor.

Last March, as the pandemic hit, the Government finally recognised that JobSeeker (known then as Newstart) was way too low and almost doubled it by a $275 a week Coronavirus Supplement, which was then cut by more than half in September 2020, lifting the number of people living in poverty from 2.6 million to 3.6 million.

Economic modelling by ANU researchers found the original payments had a massive positive impact: lowering the poverty gap by 39 per cent and the number of people in poverty by around 32 per cent, along with a direct positive impact on food security and health.

Multiple reports and services reported that people’s lives had been transformed during the months of the full supplement, with recipients telling them they could finally feed themselves properly and no longer lived in fear of being unable to pay their rent.

Post prison support worker Helen Fielder-Gill told Croakey late last year it had been a “miracle” for many of her clients. For one former prisoner, it meant still having food in the fridge at the end of a week, for another it was being able to put money away for emergencies. Some saved up and bought cars or got decent places to live in “for the first time in their lives”, she said.

Good Shepherd reported similar results from the survey it conducted with Swinburne  University, ANU and the Centre for Excellence in Child and Family Welfare.

Payment recipients said the new supplement had meant they could purchase healthier food for their household, pay off debt, purchase school-related items for children, buy some necessary but expensive items (such as appliances), visit the doctor or dentist, refill lapsed medication and put away some as savings.

The first reduction in September saw some saying their financial situation was already more precarious, and many reported negative mental health impacts returning.

Good Shepherd said there is ample evidence that purposely placing people in high-stress situations – such as keeping them below the poverty line or requiring onerous compliance tasks – undermines the ability to create long-term plans, thereby reducing individual capabilities to “strategise their way out of poverty”.

“In the current economic climate in particular, more humane policies that allow people to look after their children, put nutritious food on the table, take care of their health needs and cover essential bills will also serve the economy better and place people in an enhanced position for returning to the workforce as opportunities become available,” it said. 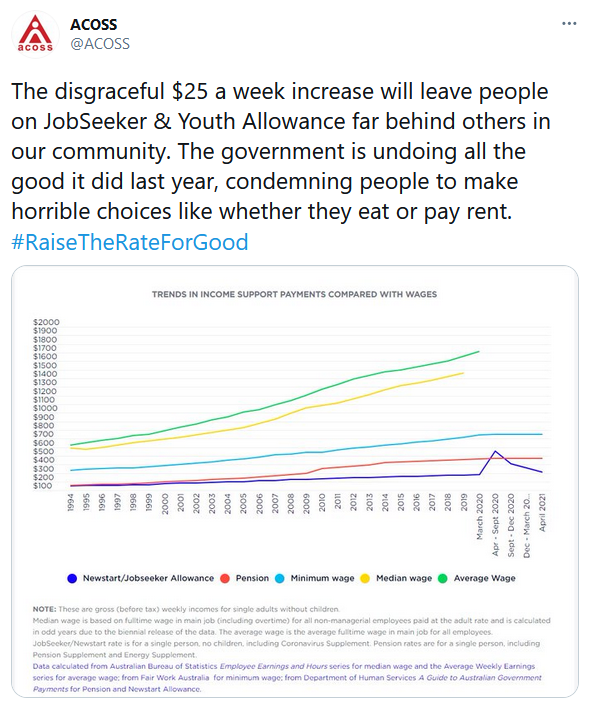 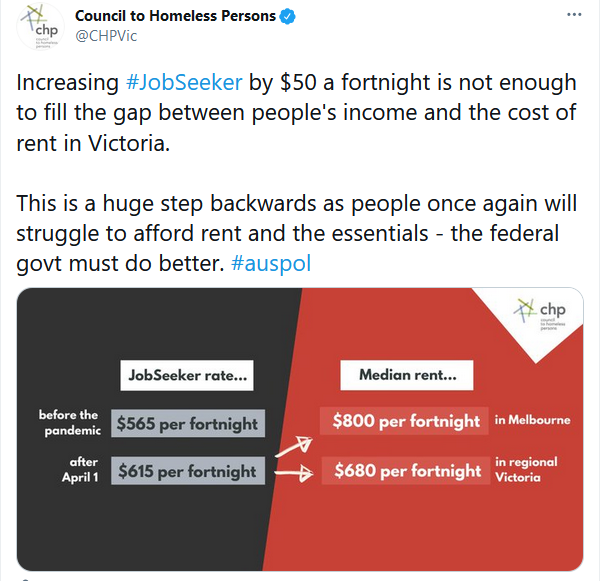 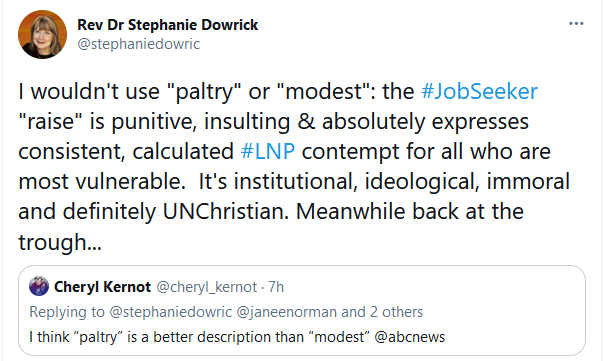 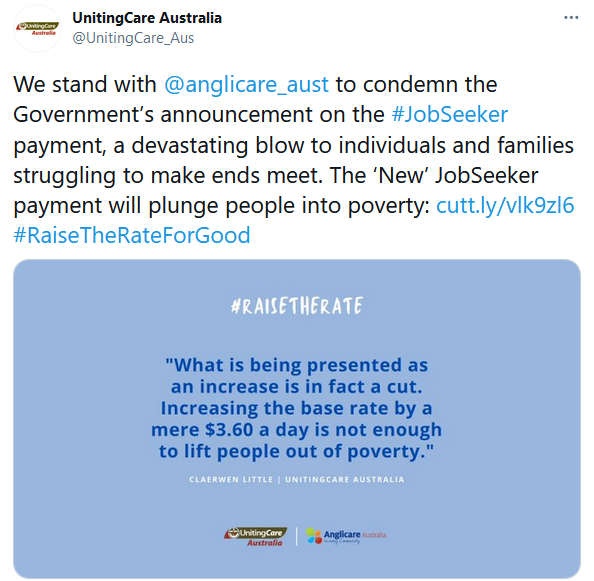 PrevPreviousI was the Australian doctor on the WHO’s COVID-19 mission to China. Here’s what we found about the origins of the coronavirus
NextMelbourne finally has a Crown royal commission — is this going to stop crime and gambling harm?Next