News on climate change action has been grim, particularly in Australia and the United States of late, but there is good news to savour.

First, Croakey readers may like to watch this good news video from the Climate Council about solar investment in the heart of Australia’s mining industry, Broken Hill (it’s not brand new but just popped up from mid-year via a Facebook feed).

And a new report is showing that politicians may not be leading the way in some countries but that mission and market are both playing a role in fossil fuel divestment, with the value of investment funds committed to selling off fossil fuel assets having jumped to $5.2 trillion, doubling in just over a year.

According to the analysis by Arabella Advisors, released this month to mark the first anniversary of the Paris Agreement on climate change, 688 institutions and more than 58,000 individuals across 76 countries have committed to divest from fossil fuels.

A joint statement from the global DivestInvest movement announcing the analysis said that those sectors that have historically propelled the movement — including universities, foundations and faith-based organisations — account for 54 percent of new commitments made, with Dublin’s historic Trinity College one of the most recent to commit.

But it said support for the divest movement among early adopters “is now increasingly being met by support from profit-driven institutions” such as large pension funds, private insurers and banks, which represent $4.5 trillion in assets (or 80 per cent of the funds now committed to divest), citing climate risks to their investment portfolios. 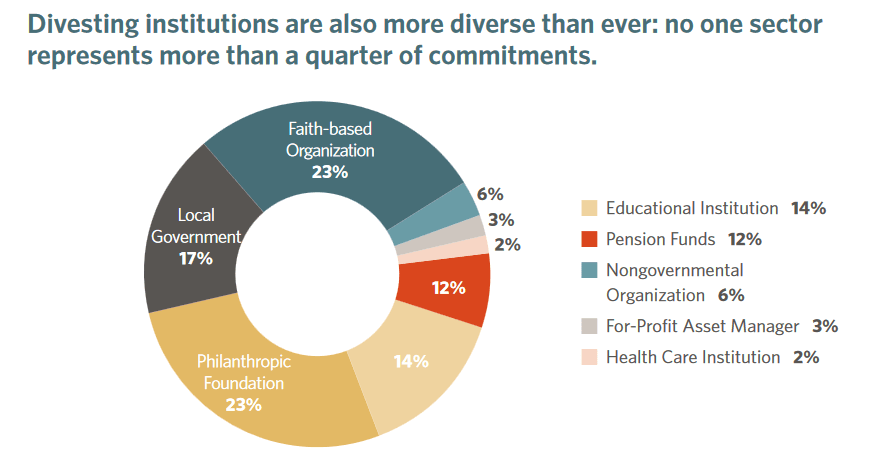 Today, the mounting financial risks associated with climate change and the prospect that a significant proportion of existing fossil fuel reserves will be “stranded” (losing their value before the end of their economic life) has brought divestment into discussions of fiduciary duty, potentially igniting a new wave of divestment.

It says the election as US President of Donald Trump, who promised to withdraw from the Paris Agreement, calls into question the United States’ ongoing commitment to reduce emissions, but “does not affect the broader structural changes” moving the energy sector away from fossil fuels. It, however, “elevates the importance of divestment as an organizing and financial tool to speed the clean energy transition.”

The report points to Australian leadership in a number of areas, particularly among universities, and highlights the “national day of divestment” campaign organised by Market Force and 350.org that saw more than 1,000 bank customers switch their accounts to financial institutions that are divesting.

The report says institutions and individuals that have pledged to both divest and invest in clean energy and climate solutions collectively hold $1.3 trillion in assets, with some using their assets to help fill gaps in private sector finance, focusing on poor and vulnerable communities that risk being left behind in the energy transition.

It also highlights grassroots campaigns that are challenging large extractive projects across the world, including in Australia, and the major victory won at Standing Rock led by American Indian protesters to block the Dakota Access Pipeline which saw Norway’s largest bank sell its assets in the pipeline. But it warns future of the project “will likely be a flash point for the climate movement” in the coming year, as US President-elect Donald Trump has signaled his strong support for the pipeline (and has a stake in it).

This Guardian article on the report says it is often difficult to calculate the precise proportion of fossil fuel investments in complex funds, but about $400 billion of the $5.2 trillion total in divestment funds is likely to be in coal, oil and gas.

A campaign by the Guardian has called on the Gates Foundation and the Wellcome Trust, the world’s largest medical research charity, to divest their large endowments of fossil fuels. The Guardian itself committed to divest from fossil fuels in April 2015.