Mob on the margins: getting the messages to services and those at risk

Marie McInerney reports from the Closing the Credibility Gap Symposium in Melbourne (which continues today):

Victorian Aboriginal health workers have been finding new ways to get messages on safe sex and clean drug injecting to many of the most marginalised in their communities where ‘shame and sharing’ meant many don’t discover the risks or seek support until “they get infected”.

Peter Waples-Crowe from the Victorian Aboriginal Community Controlled Health Organisation (VACCHO) said the programs – and a range of fantastic resources that are mostly available online – are aimed both at vulnerable people and at health services.

An over-riding aim is to reduce stigma that contributes to the overrepresentation of Aboriginal people in rates of injecting drug use, blood borne viruses and sexually transmitted infections.

VACCHO has also been working to support sexual diversity in Victoria’s Aboriginal community, including through the three-year Mind the Gap project, which spread health messages while celebrating diversity among gay, lesbian, bisexual, transgender, intersex, queer and questioning (GLBTI) Aboriginal people who are vulnerable at many levels: “a minority in a minority”.

Waples-Crowe said there was little research done to date on their risks and needs, but their vulnerability was clear: GLBTI Aboriginal people were at greater risk of homelessness, suicide and mental health issues, substance misuse, and sexually transmitted infections.

“What we’re trying to do is to break down homophobia and heterosexism, to make sure our services are inclusive for people with diverse sexualities, and trying to get clean injecting equipment out into the communities and to break down the shame on people using drugs,” he said.

Waples-Crowe was speaking to the Closing the Credibility Gap symposium on ‘health promotion with diverse and marginalised populations in the Aboriginal community’ – or, getting messages to ‘the mob on the margins’.

Like other parts of Australia, he said Aboriginal health services in Victoria had been historically driven by abstinence models of alcohol and other drugs, which limited access to HIV and hepatitis education, testing and treatment. “There is still a stigma attached to needle and syringe programs, (based) around promoting drug use and having people hanging around (the services) after,” he said.

He told the symposium that Aboriginal people – who make up just 0.7 per cent of the Victorian population – account for 14 per cent of clients of Victorian needle syringe exchange programs, while 16 per cent of HIV diagnosis in Aboriginal and Torres Strait Islander people is attributed to injecting drug use, compared to two per cent of the non-Aboriginal transmission.

“We’re not getting the messages out before people get infected,” he said. 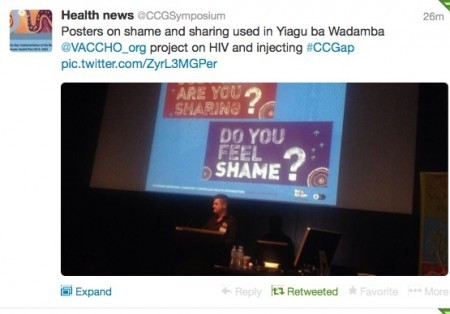 The 2010 Yiaga ba Wadamba study undertaken by VACCHO and service provider Anex of nearly 70 Aboriginal people who had injected drugs over the previous two years found that many missed the blood borne virus prevention messages and “only found out when Hepatitis C was diagnosed.”

Waples-Crowe said the study revealed two main themes: the shame of injecting and the risks of sharing drug equipment between intimate partners, as these responses indicated:

“I went into the health clinic once and my auntie was down for a doctor’s appointment so I had to come up with another excuse for why I was there …I ended up walking out and I didn’t end up getting any (needles)…you don’t want to be recognised by anyone, by family members or anything do ya”

To try to address stigma in Aboriginal communities about drug injecting, the project has run Mob in the Margins regional forums for Aboriginal health services to try to ‘bust myths’ about needle syringe programs, provide up-to-date information about hepatitis treatment options, and  ‘humanise’ the issue with drug user perspectives. It’s targeted boards and CEOs, and had some success with encouraging services to run needle exchange programs.

The work has also led to some strong collaborations to get the messages out in different ways, including with the Ilbijerri theatre company (on production like Chopped Liver and Body Amour which looked at risks with tattooing and piercings) and the production of DVDs with Hepatitis Victoria: Love your Liver and Yarning about Hep C.

Waples-Crowe says the sector’s eyes will be on next July’s AIDS 14 world conference in Melbourne, and, particularly, its International Indigenous Pre-conference in Sydney.

The work of partnerships places a heavy burden on community organisations

Gallagher said partnerships between Aboriginal and mainstream health services were vital to closing the gap in life expectancy for Aboriginal people, – “Aboriginal health is our business, but it is everyone’s responsibility”.

But she said that managing those relationships was placing growing stress on time and resources, with substantial partnership commitments left to “lone CEOs” in small organisations. 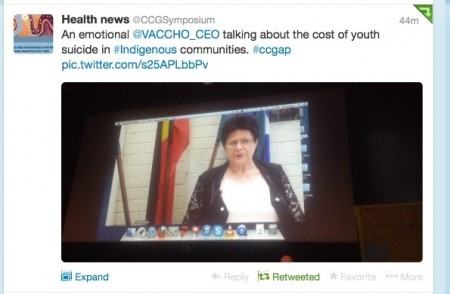 Not able to attend the symposium in person, Gallagher featured in a pre-recorded interview with conference organiser Professor Kerry Arabena.

In it, she became emotional when she spoke of having learned about the suicides of five young people in Mildura over just a few previous weeks. “We’ve got to stop it,” she said. “Our communities have been devastated by (white) settlement.”

Gallagher had been talking about her motivation as an Aboriginal leader and spoke about her mother, a Gunditjmara Elder from western Victoria, who, at 88, has outlived four of her children and most other members of her community.

“I’m very lucky I’ve got my mother….there’s not a lot of families who can say that.” Her mother had also got an arts diploma at age 84, she added.

The role of racism in the health inequities experienced by Aboriginal people will be on the agenda at the symposium today. However, while Gallagher welcomed having the issue at the forefront of the National Health Plan for the first time, she said it’s not up to Aboriginal people to tackle it.

“I think we have to advocate around the effects that racism has on our health, on our communities and individuals – it has a humungous impact on health outcomes for Aboriginal people,” she said. 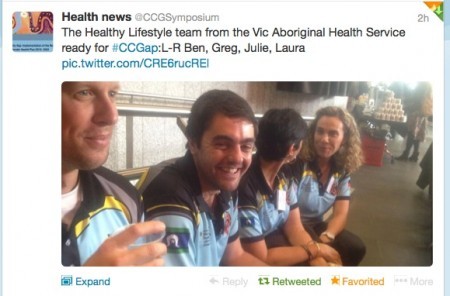 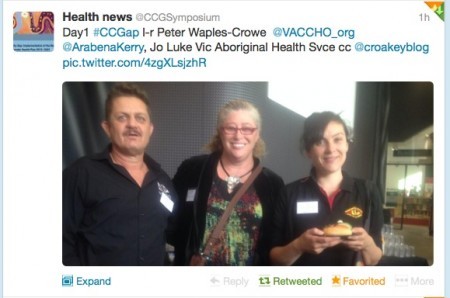 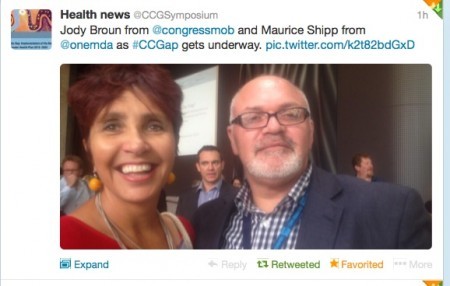 And some feedback for conference tweeters: