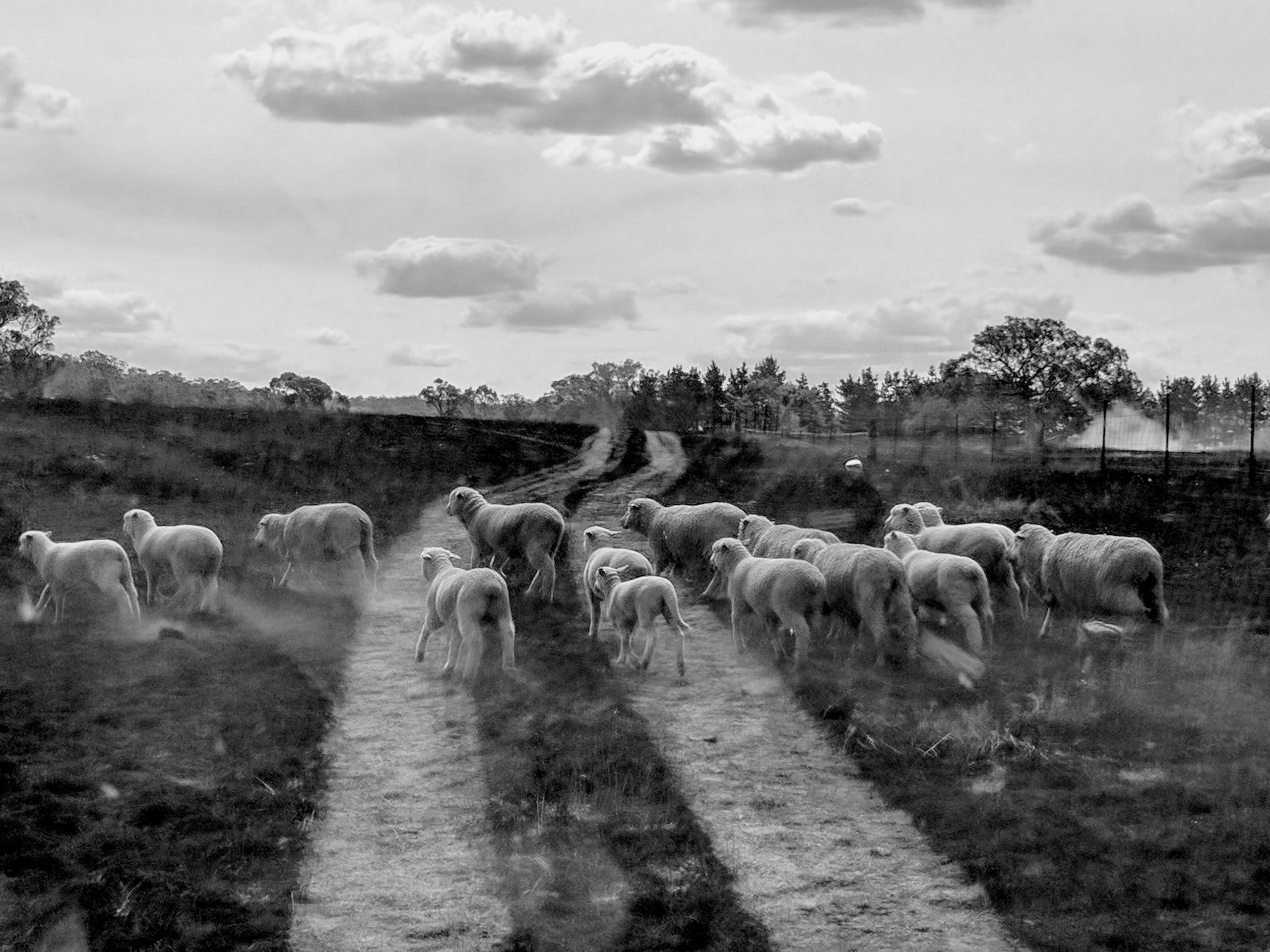 Introduction by Croakey: In a year beset by climate change-fueled bushfires, drought, and the fallout of the novel coronavirus pandemic, Australians outside of the major cities have been doing it especially tough.

“Our Budget announcements – across infrastructure and transport, digital connectivity, water security, regional partnerships with states, and supporting local jobs and local leaders – are designed to make every part of our country better,” McCormack told MPs.

The statement was heavy on rhetoric about the importance of mining and agriculture and acknowledged the trials of the bushfires and the pandemic, but delivered little in the way of big-picture thinking about the upstream drivers of both issues — planetary health.

Farmers for Climate Action described the budget as missed opportunity to put Australian economy “on a more solid and sustainable path to recovery, tackling the pandemic and the rising risks of climate change at the same time”.

While there was a “smattering” of commendable adaptation measures, Farmers for Climate Action said these were “swamped by the billions set aside for taxpayers’ subsidies for gas and other fossil fuels”:

There are some good examples Australia could have looked towards.

Earlier this year the European Union seized the opportunity, investing more than $800 billion in everything from renewable energy to low-emissions agriculture and electric cars. Per capita, that’s almost nine times more than the Australian government proposes to invest in a climate-smart economy.

Rather than following the lead of the EU, and taking this opportunity to supercharge the COVID recovery with a clean jobs package, the Federal Government missed the moment”

Independent MP Helen Haines, who represents the northeast Victorian electorate of Indi, was in the chamber for McCormack’s remarks, and responded with a detailed Twitter thread which we’ve reproduced below.

Indi, which is on the border of NSW and Victoria, has been heavily impacted by COVID controls, just months after the region was devastated by the 2019-20 summer bushfires.

The Deputy Prime Minister is about to deliver a statement on the Budget outcomes for regional Australia. I’ll be sharing my thoughts in a thread.

It is welcome to see the DPM giving this statement at all. This is the first time the Government has delivered a Budget statement on regional outcomes in many years. This address should be an annual tradition – central to all Budget and policy planning. Not an afterthought.

The DPM says the Government acted swiftly on bushfire recovery with its $2 billion recovery fund. But the single biggest measure, a quarter of the total, has barely been spent at all. This is a screenshot from the @FireRecoveryAU website this morning – just 2 percent has been spent 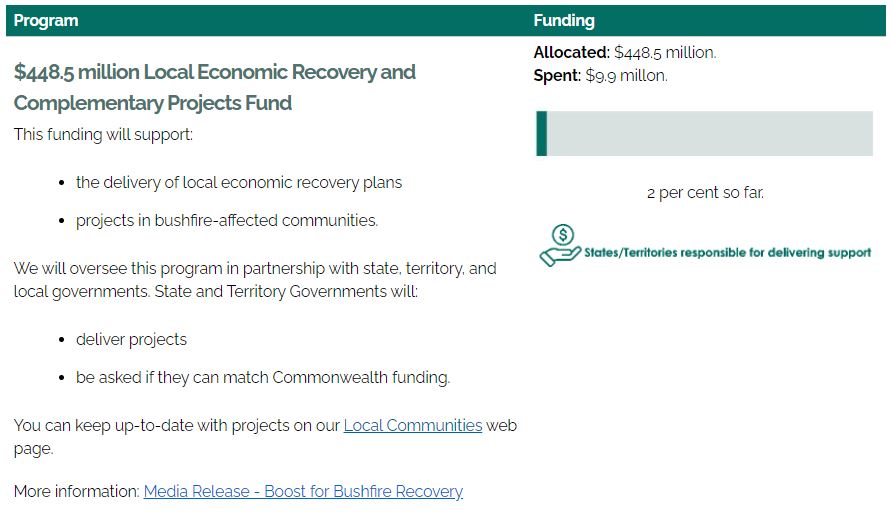 Many of the measures the DPM is celebrating – JobKeeper, instant asset write offs, cash flow for small business – these are good measures but they are generic policies for the whole country. Regional Australia is facing specific challenges and we need a specific leg up.

The $5 billion Future Drought Fund is an excellent measure that will put $100 million a year into regional economies. And it’s a better policy for the amendments that Cathy McGowan pushed for. It’s important to say though this was announced years ago, well before the pandemic.

The DPM is right that the Government has put funding into regional aviation. But our largest regional centre of Albury-Wodonga has just had flights slashed. What’s the plan to get these routes back up once the pandemic is passed?

An extra $2 billion for investments in water infrastructure is welcome. But the biggest threat to water security is declining rainfall due to a disrupted climate. The latest projections from @CSIRO show spring rains could decline by 36 percent in the Ovens-Murray if we take no action. 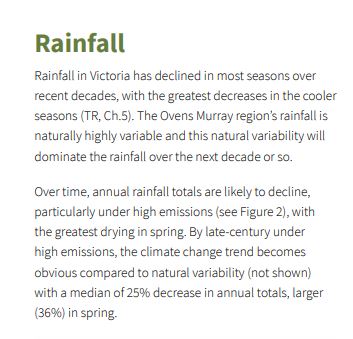 This Budget is a bit of a let down on regional infrastructure. Adding $10 billion of funding over 10 years is a move for an ordinary year, not a year when we need to jolt the economy back into life. In Indi we have 47 shovel-ready projects the Government could fund today.

I absolutely welcome the $18.5 million in new funding for roads and local infrastructure in Indi from this Budget. Here’s how that funding splits across our 9 local government areas. This is a good start and I congratulate the local councils on their advocacy on this. 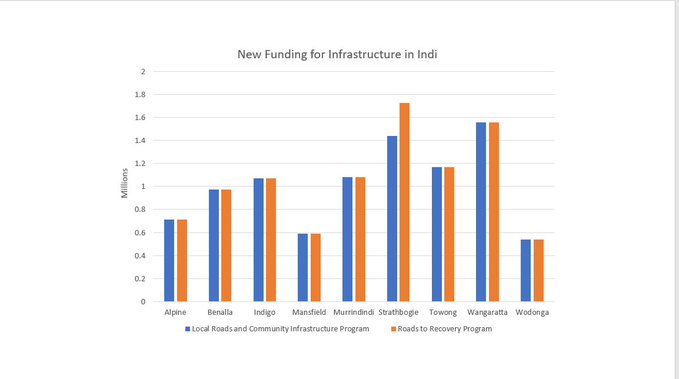 The new round of the Building Better Regions Fund is great. But this $200m package is only being spent over 5 years. In fact, just $58m of the $553m set aside for regional Australia in this Budget will be spent this year. This won’t create jobs in the here and now. 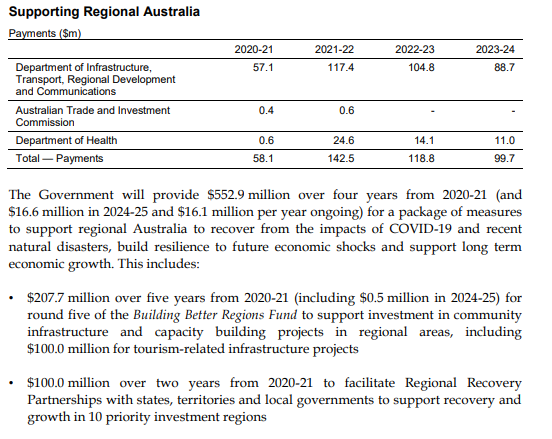 This gas-led recovery delivers little benefit to everyday regional Australians. My $483 million Local Power Plan is an energy plan for the regions. It would support locally-owned renewable energy and could unlock over $6 billion of private investment.

The DPM just said “we’ve provided funding for the forestry industry through the NBRF”. But that’s not quite true. This funding did not start 1 July. This $41m fund, announced in the Eden-Monaro by-election, only just opened applications and won’t get any money out the door for weeks.

That’s a problem because these burned logs will degrade if it takes too long to get the money to harvest & process. There’s still timber rotting on the stump or in the mill. Here are some burned logs from Tumbarumba in a sawmill in Benalla I visited a few weeks ago. Still there. 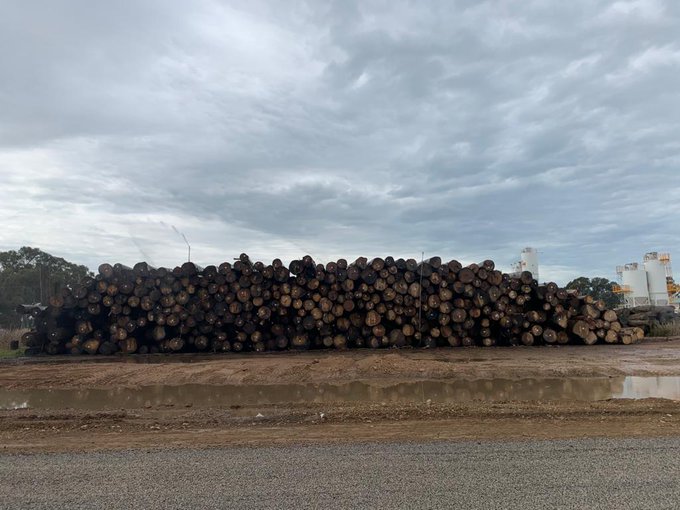 Then there’s the new $100m fund to support regions hit by bushfires, COVID-19 and drought. Indi was at the forefront of all three but has been excluded. I got a call from @M_McCormackMP this morning offering to explain why that decision was made. I look forward to that meeting.

My view? While money for dams, bridges and roads is always welcome, that is business as usual. We are in a moment of unique economic crisis and enormous opportunity. But this Budget has fumbled that opportunity to seriously invest in the regions.

In this “biggest Budget of a generation”, the chance to grow the regions to their full potential has not been realised. This is a government that talks big about the regions but often appears to be more bark than bite.

I’ve worked hard since the election to ensure the Government delivers on its election promises to Indi. You can read about that work here. And I’ll be taking the exact same approach to the promises in this Budget: accountability, transparency, delivery.

And if you live in Indi, I want to hear from you. Over the coming months, I’ll be voting on many of the measures announced in the Budget. And I want to be best representative I can for you. I’d love if you could take five minutes to share your thoughts