Responses to the Australian Health Practitioner Regulation Agency’s (AHPRA) preliminary consultation paper on a social media policy for health professionals have been swift, passionate and informed (you can read some of them at the bottom of the previous post).

If nothing else, what AHPRA and other health organisations might take from this episode is the power of social media to harness informed feedback.

I imagine it might have cost AHPRA some thousands of dollars to employ a consultant to solicit the advice that has been freely offered via Twitter and blogs etc.

Perhaps another lesson to organisations is: if you’re going to develop a social media policy (or indeed any policy), make sure you are active in the space first, so that at least you can be part of the discussion. The days of centralised information control, as this episode shows, are over.

Below is some more feedback – a response from Victorian surgeon Jill Tomlinson, a graduate of the Webicina Social MEDia Course, and links to blogs by nursing leaders and consultants.

And at the bottom of the post is an AHPRA statement.

Having been actively involved in healthcare social media for eight years, I think it’s great that AHPRA has started the process to create a social media policy for health practitioners. That said, the consultation process should lead to major changes to the preliminary paper that’s available online.

Social media is a communication tool, just like a telephone call,  a pager or a newsletter. Like any communication tool it can be unhelpful or even harmful if you don’t use it appropriately, regardless of your intention.

There are many Australian practitioners who have grappled with healthcare social media field and who have a wealth of experience and knowledge to assist AHPRA with the upcoming consultation process. Their experience should be given due weight by those who have gained little or no personal experience of the field.

I recommend that all practitioners who are interested in engaging with social media first do the online Webicina SocialMEDia course (http://thecourse.webicina.com/), examine available social media policies and ensure that their healthcare website adheres to the Health On the Net code principles.

Some items that are not included in the AHPRA preliminary paper are deceptive social media practices, such as purchasing Twitter or Facebook followers, posting under false accounts and soliciting false positive reviews.

It is now generally agreed that healthcare practitioners should be demonstrably transparent in their online presence, so it would be wise that AHPRA include a recommendation that practitioners always post under their own name and have contact and credential information available.

The question of what constitutes a testimonial on social media needs to be clarified by AHPRA – the current proposal suggests that any Facebook Page that receives a “Like” or a positive comment could be considered in breach of the policy. If a “follow” or “retweet” on Twitter is also considered a testimonial or endorsement that would mean that all practitioners will have to shut down their Twitter accounts and Facebook Pages.

I don’t think AHPRA would intend for their policy to be taken in this way, and I fully expect that such issues will be addressed during the upcoming consultation phase if they have not been already.

As part of the process I hope to see significant community input, so we can ensure that our healthcare social media practices are acceptable to our patients.

There are many questions that need to be asked:

• For instance, if a doctor is permitted to publish a case study in an online journal, should publishing the same material on an educational blog with the consent of their patient be considered a breach of professional obligations?

• Are the healthcare professionals who post clinical images, x-rays and ECGs at “Life In The Fast Lane” (http://lifeinthefastlane.com) breaching professional ethics? Or are they using social media as a valuable tool for communication and education?

• Could my active participation in a recent successful social media campaign for gender equality be considered a breach of professional obligations through a blurring of professional and personal boundaries?

I don’t have the answers to these questions, but I’d dearly love to know.

AHPRA should move beyond a fear-driven, risk-averse approach

An extract from a blog by nursing leader and consultant Philip Darbyshire, an Adjunct Professor at the University of Western Sydney

…On this ‘positive project’ of social media and its potential, AHPRA has nothing at all to say.  What is offered instead are seven pages of punitive, fear-driven, risk-averse, lifeless, unimaginative warnings about what might ‘go wrong’ or what ‘someone might do’ in misusing social media.

All of this ‘governance’ and guidelines mania is of course, a rather desperate attempt on the part of the professions and bodies such as AHPRA to wrest back control in world where the internet and social media has well and truly pulled the rug out from underneath them. This particular genie has long since escaped the bottle and is NOT going back.  As Tim Berners-Lee commented recently, “The internet does not have an ‘off’ switch”. To that I would add, “and social media does not have a mute button”.  This ‘Consultation Paper’ is a rather clumsy attempt to create the impossible illusion, that ‘guidelines’ or ‘policies’ control behaviour.  The forlorn hope is, that if enough of these are written, then ‘nobody will do something stupid on Facebook’.

The reality of course, is that at some point someone certainly WILL. That is a fact of life, not a failure of ‘governance’.  The culprit is not suffering from a ‘policy deficiency disorder’.  They are personally responsible for their poor judgement and will hopefully learn from the mistake and not repeat it.  As thinking, responsible, autonomous health professionals, the vast majority of social media users will not make such serious errors.  We will use social media wisely, creatively, enjoyably and in ways that will benefit our colleagues, students, patients and clients.

If AHPRA cannot support this movement positively and enthusiastically, then it should at least have the grace and wisdom to step out of the way and do not obstruct it….

Where was AHPRA in the social media discussion?

An extract from a blog by eGPS, a health information consultancy

But where were AHPRA in all of this? They did not engage in the conversation at all. Why? Because AHPRA do not have a presence on Twitter or Facebook.  The AHPRA website has no links to social media. So, with no presence in the world of social media, how will AHPRA enforce this policy?

Is it possible, or indeed wise, to draft a policy on the use of a medium with which you have little or no experience?  It seems, that with no SoMe presence, the policy makers are missing out on valuable feedback. In it’s draft stages, the AHPRA Social Media policy has a narrow view of social media as a necessary evil rather than a positive platform to communicate, engage, inform and collaborate….

Tear it up and start again

Meanwhile, the ImpactedNurse.com blog says:  The document should be “re-written from an affirming rather than a punitive point of view”. 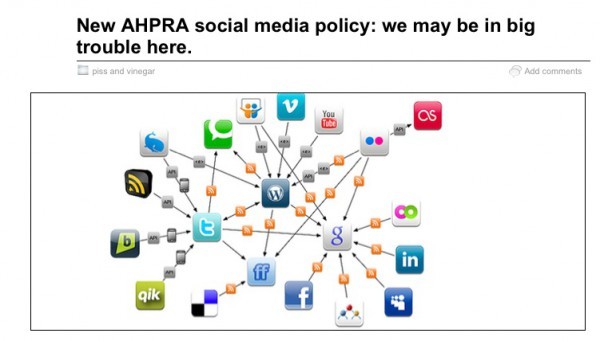 And from the Twittersphere….

The National Boards in the National Registration and Accreditation Scheme (National Scheme) will release a consultation paper on a social media policy in October/November 2012.

We are pleased that this early draft is generating a lot of interest, especially on social media. National Boards are monitoring feedback closely and will take the issues raised into account when refining the draft social media policy before it is released for public consultation on the National Boards’ websites.

If you would like to contribute feedback on the preliminary draft social media policy, please email your considerations to socialmediaconsult@ahpra.gov.au by close of business 14 September 2012.

When the formal public consultation process opens, the National Boards encourage feedback from registered health practitioners and members of the community on the draft social media policy.

The National Boards will publish the public consultation document on their websites, and will encourage wider distribution to seek extensive feedback.

Until then, visit the News section of the National Board websites (via www.ahpra.gov.au) for updates on past and current consultations, general communiqués from National Boards, media releases and more.

Questions about freedom of speech in a contested, politicised pandemic environment

PrevPreviousIs AHPRA on the right track re social media use by health professionals? A chance to let them know your views…
NextTweets of the week (belatedly): Is a single funder for health inevitable?Next