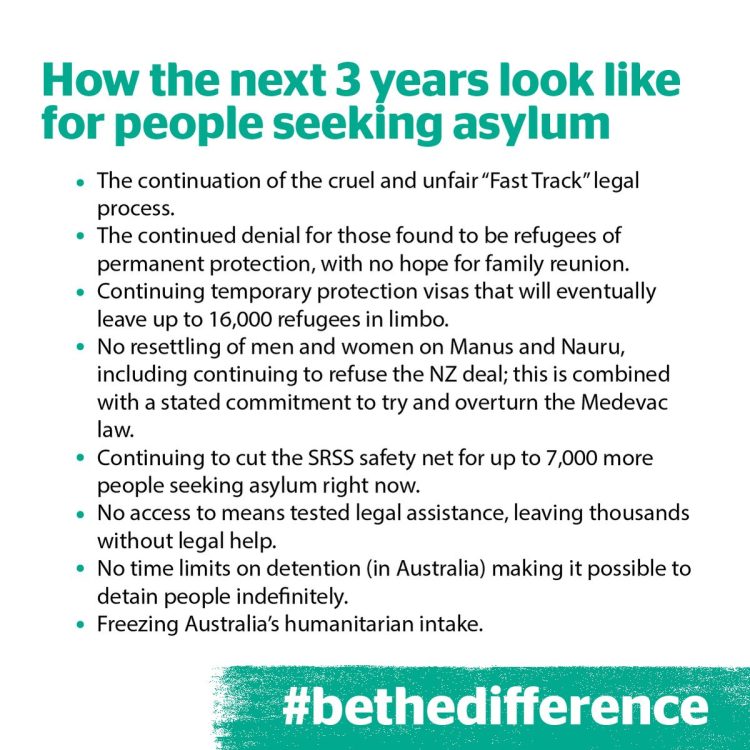 The re-election of Scott Morrison’s conservative Liberal-National government has sparked a “human crisis” in Australia’s offshore immigration detention, with a surge in self-harm and suicide attempts and advocates warning of an escalating medical crisis.

Tweeting from Papua New Guinea’s Manus Island, acclaimed author Behrouz Boochani said every hour brought more reports of self-harm among asylum-seekers indefinitely detained there by the Australian government, with at least a dozen suicide attempts since the May 18 election result — seven in the past 24 hours alone.

“The local hospital in Manus is not capable of admitting suicidal and self-harmed cases anymore. There is no medical facilities in the island for providing refugees with treatment. The situation is an extreme emergency,” said Boochani.

“So many people in Manus and Port Moresby attempted suicide, many people refuse to eat because of severe depression. It is an absolute emergency.”

“Australia cannot ignore the human crisis in Manus and Nauru. The situation is getting worse day by day, it is a crime against humanity and violation of human rights. I wonder why the international humanitarian organisation(s) are silent in the face of these crimes.” 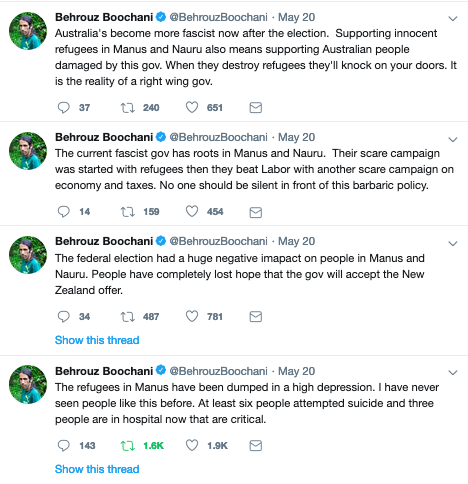 It comes as doctors overseeing the evacuation of sick refugees under emergency legislation passed last year warn of an “unprecedented medical crisis on Manus and Nauru“:

After six years of offshore detention there is an unprecedented medical crisis on Manus and Nauru. Men and women, who have been detained by the Australian Government, are experiencing a wide range of serious health conditions ranging from people who are acutely suicidal, to people with serious heart conditions that cannot be treated on the islands.

A spike in suicide attempts and self-harm has been reported on Manus and Nauru in the days since Federal election.”

Dr Sara Townend is co-ordinating the evacuation response and said there had been more than 40 medical transfers since the bill became law in February, with — on average — 11.5 applications per day for assessment and 8.2 triages completed daily.

“We have been working rapidly, and around the clock, to ensure critically ill people are assessed by doctors for transfer as quickly as possible. After almost 6 years the demand for assistance with applications has been huge,” said Townend.

Far from a solution, Townend said the medevac law — which the new government has indicated it intends to repeal once Parliament reconvenes — was a “lifeline” for the most desperate, urging that more be done. Were the medevac provisions withdrawn by Parliament, legal challenges or the threat thereof would once more be the only way for sick asylum seekers to seek medical treatment in Australia.

“The Medevac Bill gives doctors a lifeline to assess sick refugees. It doesn’t diminish the responsibility of the Australian Government to look after the people in its care,” said Townend.

“The Government has, and continues to have, the power to bring people to Australia for urgent medical care. They are in a position to do this more urgently than the Medevac process allows for.” 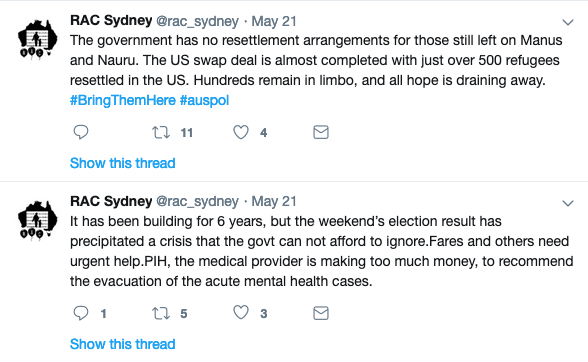 Asylum seekers both offshore and in Australia had pinned their hopes on a change of government, and the re-election of former Immigration Minister Scott Morrison as the nation’s PM has devastated refugee advocates.

As Kon Karapanagiotidis from the Asylum Seeker Resource Centre wrote in the immediate aftermath:

Seeing the continuation of a government that oversaw 12 people die in offshore prisons, thousands turned back to danger and 30,000 left in limbo in the community for nearly a decade, brings a sense of immense dread to me and everyone at the ASRC. We know this election result will only embolden them and that refugees will once again be in their firing line.

The past 6 years have been brutal and crushing for all those across the nation who work with, support and care about people seeking asylum. It’s dispiriting that as a country, we have given approval to another term of a Morrison Government that has been obsessed with border security and the stripping away of basic rights for people seeking asylum and refugees.

Over the years we have witnessed the devastating human cost of punitive policies for people seeking asylum regardless of who has been in government and the result is today, the situation for them is now dire.

The lines for our Foodbank are 50 people deep today as they were last Friday. The calls on WhatsApp from desperate suicidal men on Manus continue to ring through every few minutes as they have for nearly 6 years now at the ASRC.

There are 100s of refugees our Caseworkers are helping right now with their Medevac applications for urgent medical transfer. Men and women who’ve been waiting for medical care for up to nearly 6 years.

The homeless families cut off from all support payments and those not allowed the right to work are still queuing up at our front reception asking for housing as I write this.

The wait up until 2021 just for a court hearing for people’s asylum claims remains the timeline for hundreds of families.

And the faces of the refugees today are still weary and sunken with exhaustion as they know the future remains uncertain, at least for now.”

Seeking positives from the election result, Karapanagiotidis said it was the first campaign in almost 20 years where asylum-seekers were not front and centre of debate, though the fact that almost 750,000 Australians voted for the divisive rhetoric of One Nation and the United Australia Party showed “we are a long way from the welcoming, inclusive, fair society that we all dream of”.

Liberal-National policies offer little succour for asylum-seekers and refugees in immigration detention or struggling to make ends meet in the Australian community.

In its election campaign report-card comparing the major parties, the Refugee Council of Australia found few highlights in the Coalition’s offerings, while the ASRC said little would change for the 5,000 people accessing its services:

In a sign that he is expected to stay a draconian course when it comes to immigration, Morrison returned Peter Dutton to the Home Affairs portfolio when he unveiled his Ministry on Sunday.

But Karapanagiotidis has urged Australians not to give up hope.

We have already booked our flights to Canberra next month to lobby the Morrison Government and the Crossbench to change the policy on asylum.

In the next 30-60 days we will be calling on you to take action to change the policy in Canberra, getting involved as a volunteer, writing to your local MP to demand they take action on current brutal and cruel policies, helping out at our Winter food drive and by rallying your community to join us in our Refugee Week activities.

Our shared vision is to live in a country where people seeking asylum are embraced, where we are proud of the contribution of refugees, their resilience, and their strengths. A country and a people that believes in a welcoming, just Australia for ALL.

We can achieve this vision but it relies on all of us holding the line.

We can and will achieve this together as custodians of hope.”

PrevPreviousHopes and questions as Wyatt makes Australian history
NextOn the “dire and deteriorating” media landscape, and other post-election reflections relevant to health advocatesNext