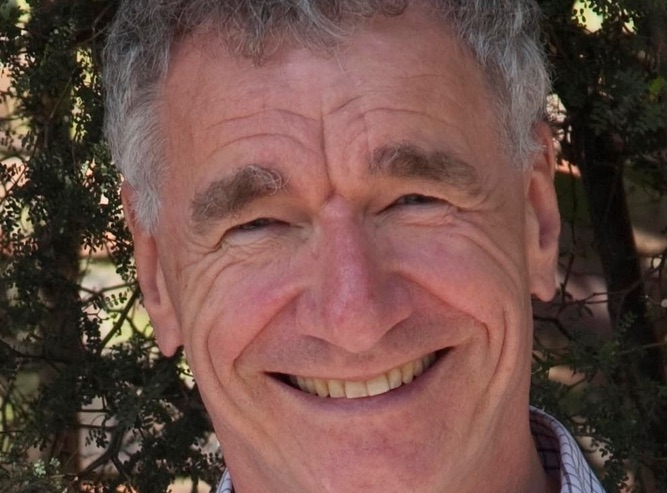 Mourning the loss, while celebrating an amazing legacy and courage “beyond compare”

“For those who know my husband…

It is with the heaviest of hearts that I share the devastating news that my beloved husband, Professor Chris Del Mar, passed away on the weekend.

Chris has helped and inspired countless patients, medical students, doctors, and researchers. He was an original thinker and unafraid to challenge the evidence behind conventional beliefs and practices. His decades of research influenced practice and policy in Australia and around the world.

Chris is renowned for his wisdom, compassion, wit, intelligence, integrity, entertaining stories and humour. He was kind, generous, always a gentleman, and genuinely interested in those around him. He had (so!) many interests and skills, was curious about nearly everything, and had an insatiable desire to “do good”. In the last three years since his catastrophic injury, the courage and determination he showed is beyond compare.

Chris leaves an amazing legacy. It has been a privilege and blessing to be part of his life. He has filled our lives with immense joy and love and we are utterly heartbroken.”

Her tweet was met with scores of replies showing the breadth and depth of admiration and appreciation for Del Mar, whose work in evidence-based practice, academic general practice and shared decision-making is internationally renowned.

He was 72 when he died, three years after suffering a devastating spinal injury while surfing.

On 28 February, the Vice Chancellor of Bond University, Professor Tim Brailsford, released this statement to staff:

“As many of you know, Chris was severely injured in a surfing accident in February 2019. Through some extraordinary determination and the loving support of family and friends, Chris recovered sufficiently to return to work.

Chris was a remarkable inspiration to his colleagues as a valued contributor to both research and teaching. His professionalism, attention to detail, mentoring of junior colleagues, and ever-inquisitive passion to search for answers to global health challenges are hallmarks, together with his sense of humour and infectious esprit de corps.

Chris came to the University in 2004 as Dean of Health Sciences and Medicine and led the establishment of Bond’s medical program – with the first cohort of 72 students commencing in 2005.  He was also the University’s Pro-Vice-Chancellor (Research) from 2005-2010 before moving into a research-focussed role as Professor of Public Health.

Professor Del Mar had an exceptional academic and clinical career, and his research had a global impact.

Chris graduated in medicine from the University of Cambridge in 1976. He subsequently moved to Mackay as a full-time GP, becoming a Fellow of the Royal Australian College of General Practitioners (RACGP) in 1980.  But his research inclinations led him to move into academia, becoming Professor and Head of the Discipline of General Practice at the University of Queensland 1994-2004, before taking up his position at Bond.

Professor Del Mar was a prolific author and an international leader in research on respiratory tract infections, on the emerging problem of antibiotic resistance, and on shared decision making in health care. At Bond this research was supported by two successive Centres for Research Excellence (CREMARA and CREMARC) funded by the National Health and Medical Research Council. Internationally, Chris had a range of roles but perhaps most importantly was the founding Coordinating Editor of the Cochrane Collaboration’s Acute Respiratory Infections Review Group.

Professor Del Mar’s contributions to Australian general practice were recognised in 2008 when he was honoured with the RACGP’s highest award, the Rose-Hunt Medal. Further, the Australasian Association for Academic Primary Care awarded Chris the Bridges-Webb Medal in 2014. In 2021 he was appointed a Member of the Order of Australia for significant service to tertiary education, to health and medical research, and to professional bodies, which the Governor of Queensland Dr Jeanette Young presented at his home late last year.

He will be deeply missed by his many former students, colleagues, and many friends. Our sincerest thoughts and condolences are with Chris’s wife, Professor Tammy Hoffmann and their family.

I know that many in the University community will want to reach out to Tammy. However, at this time, the family has requested time and space to grieve while they say farewell at a private funeral. The University is in contact with Tammy and there are plans for an opportunity to celebrate, acknowledge and honour Chris’s life, career and contribution at a memorial service in the coming weeks.” 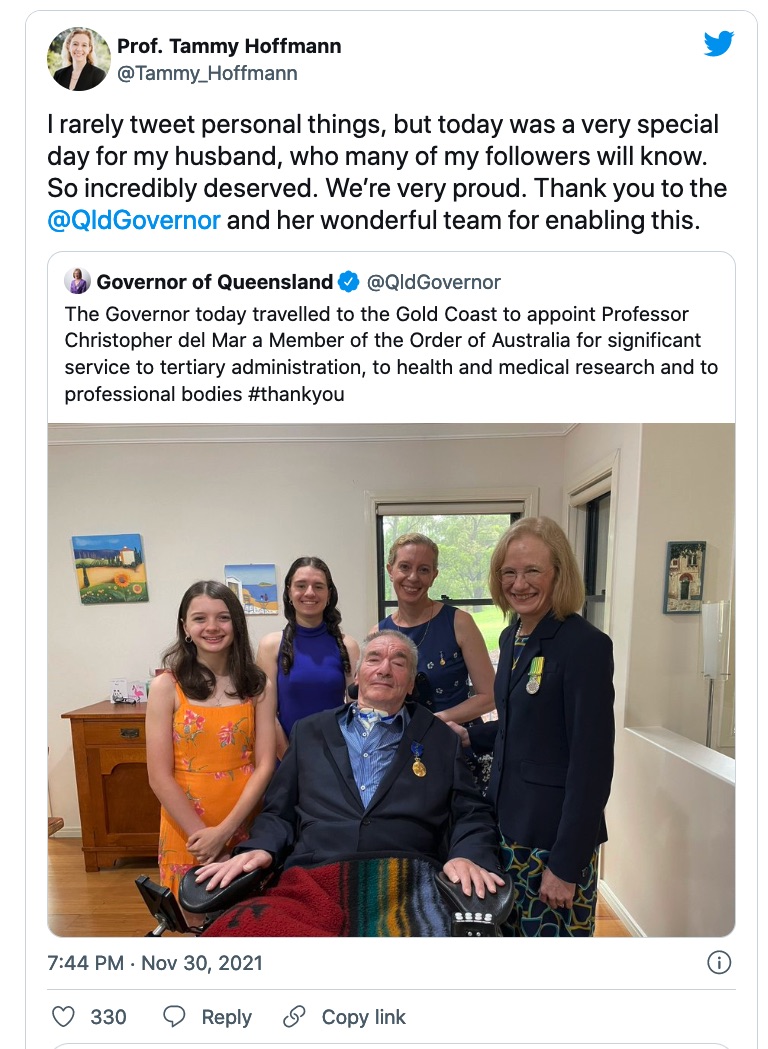 Cochrane Australia described Del Mar as “one of Australia’s most prolific and generous Cochrane contributors”.

The statement said: “Chris contributed professionally and personally to better the lives of others and inspire the next generation of researchers and clinicians across many different fields.

“Chris was a literal and figurative giant whose contribution to Cochrane in Australia and internationally was immense. He led the Cochrane Acute Respiratory Infections Group for two decades, supporting and mentoring the next generation of Cochrane authors, and never shied away from tackling controversial topics or challenging conventional orthodoxies. Chris was a lively contributor to several Cochrane Australia symposia and his presence and charm will be greatly missed.” 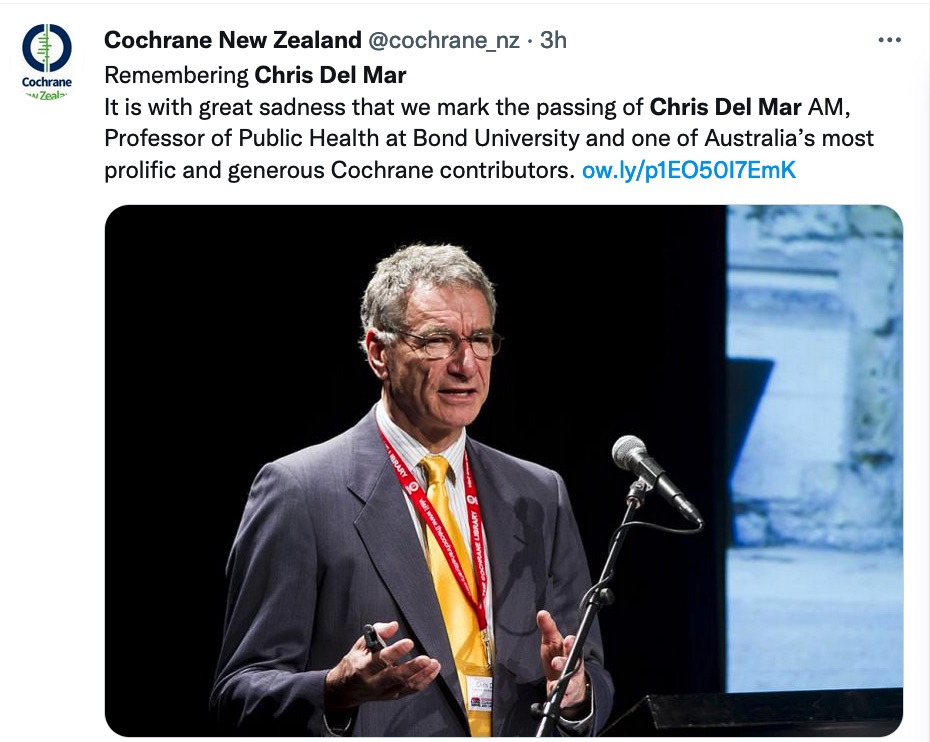 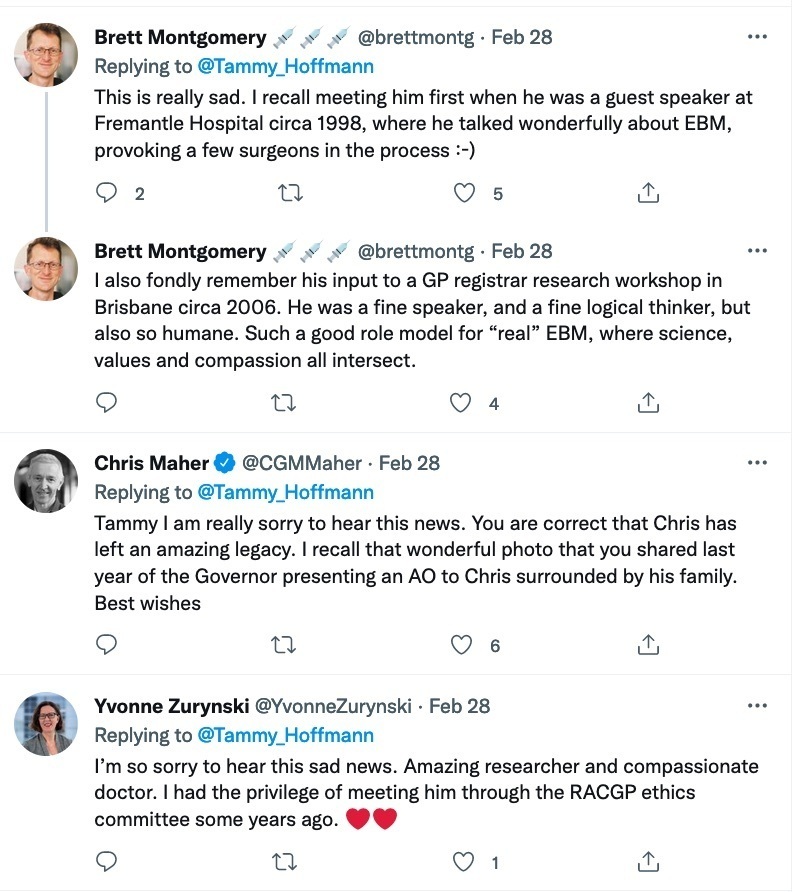 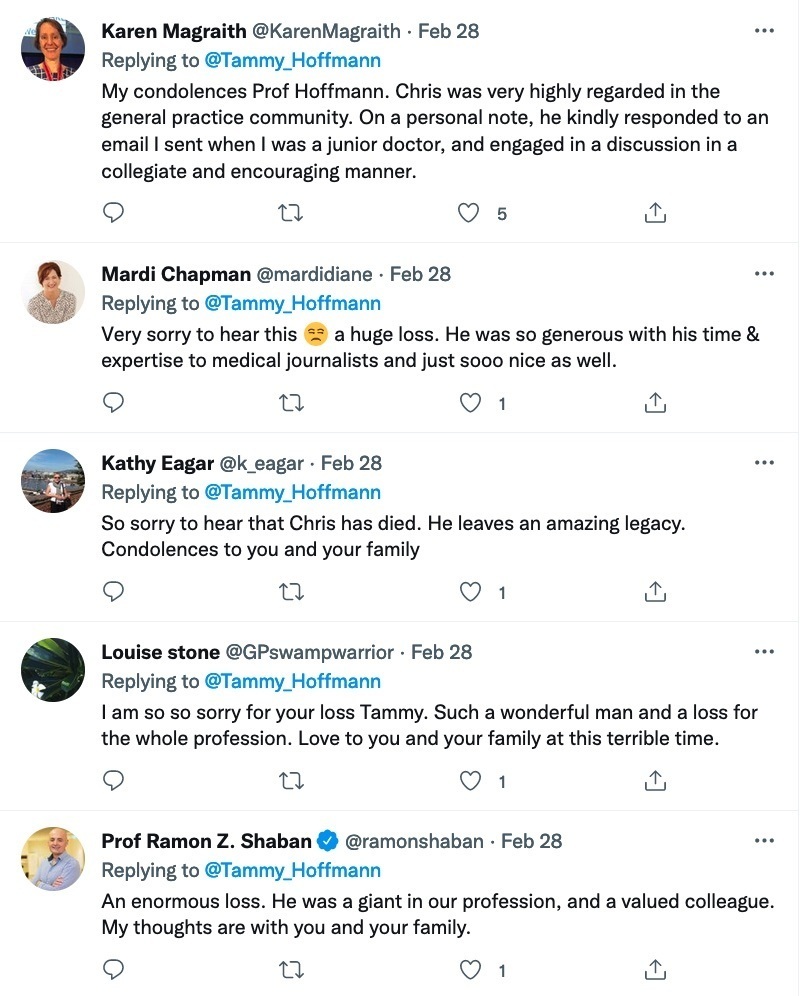 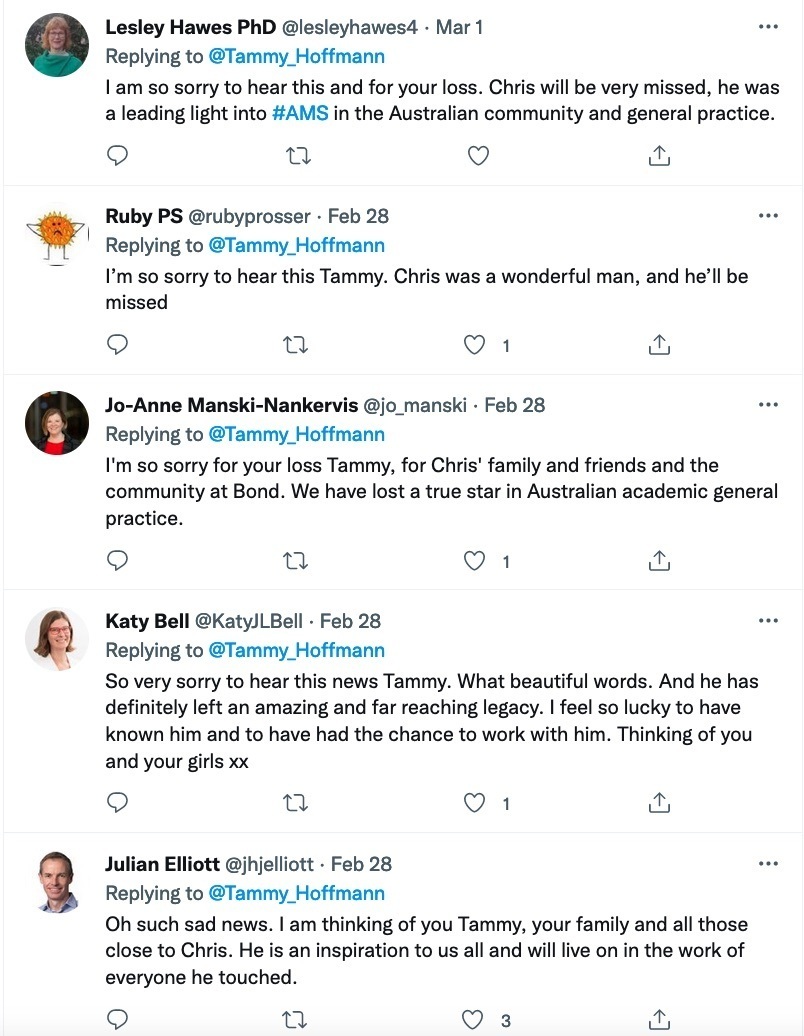 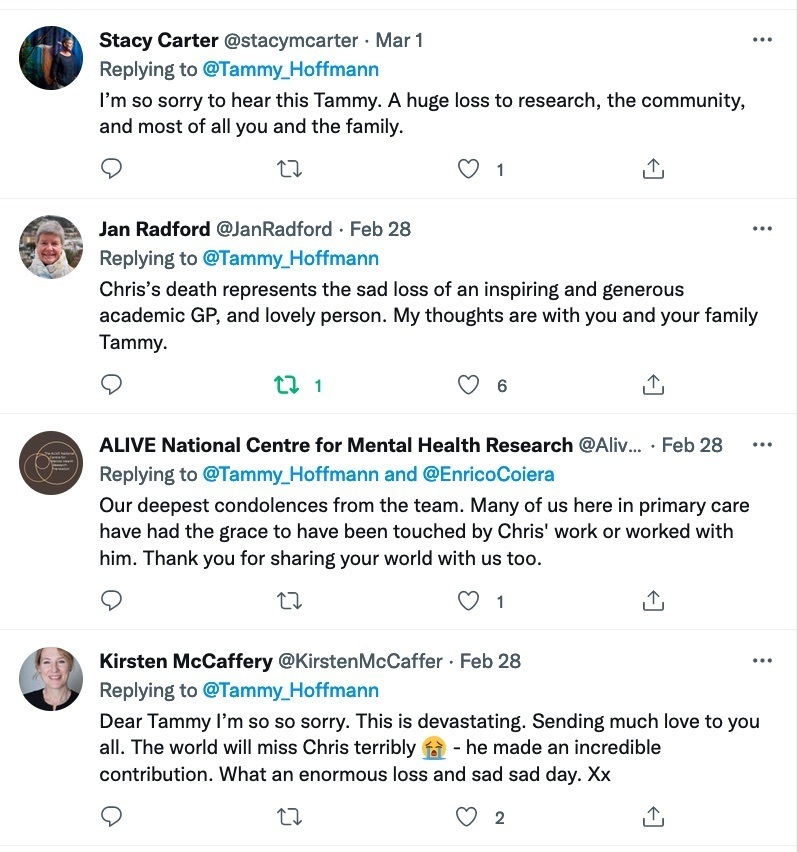 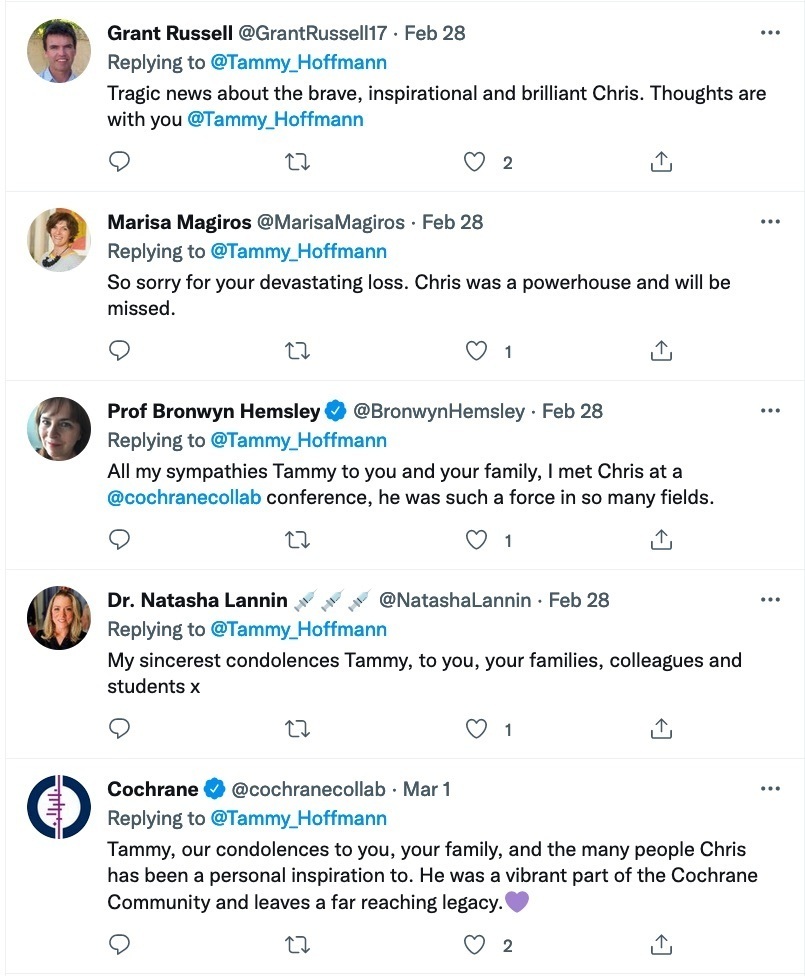 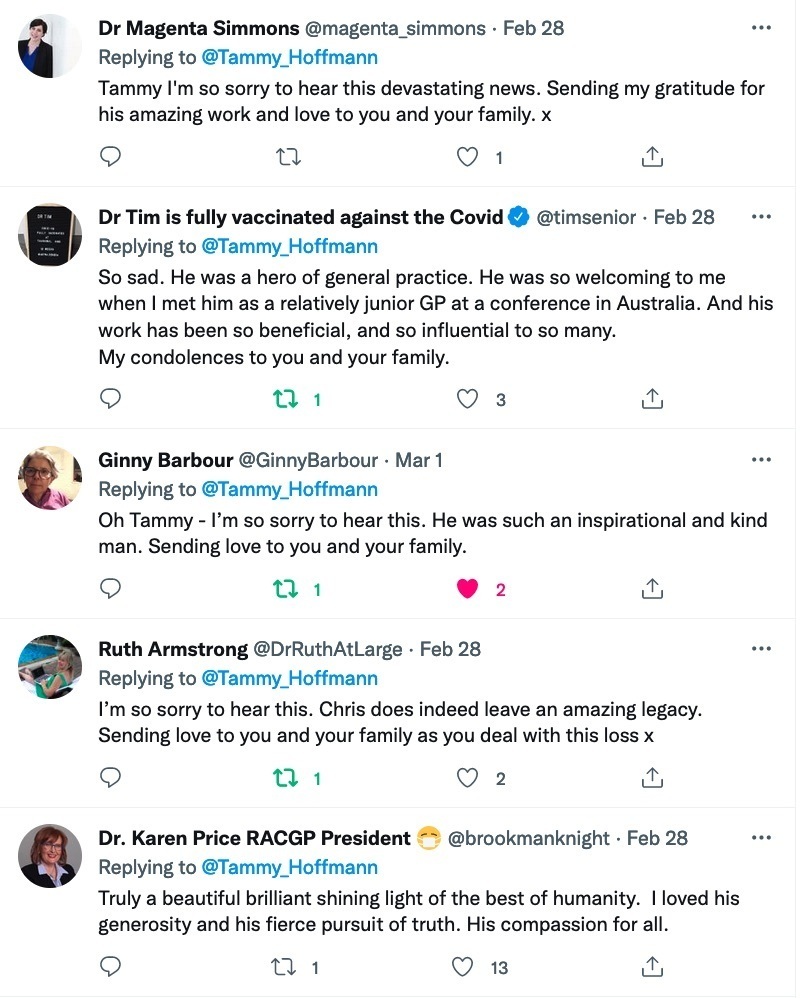 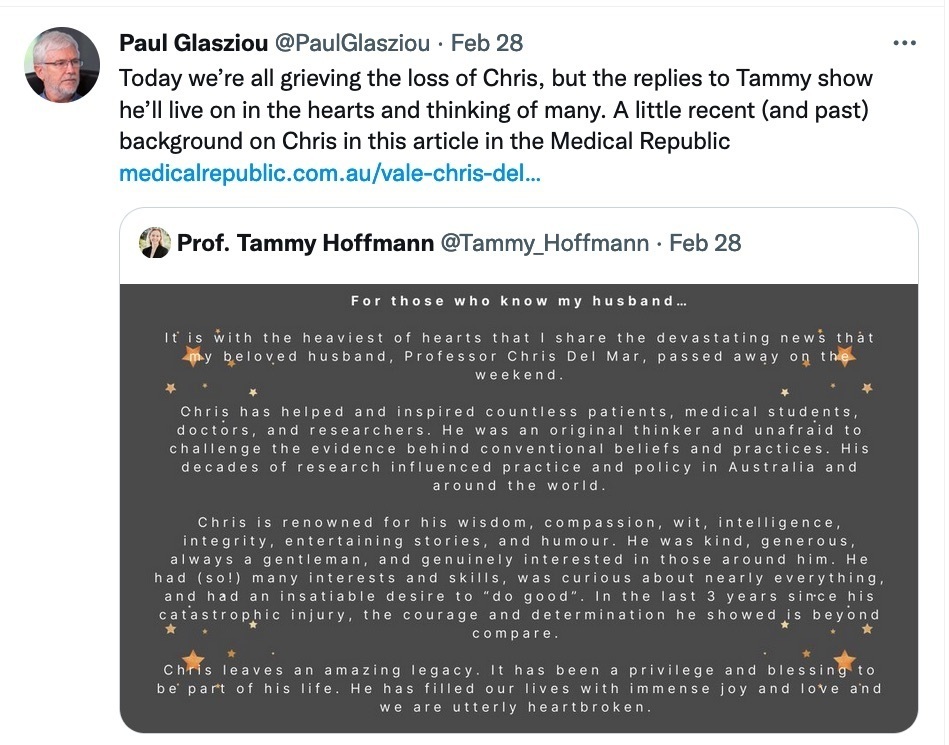 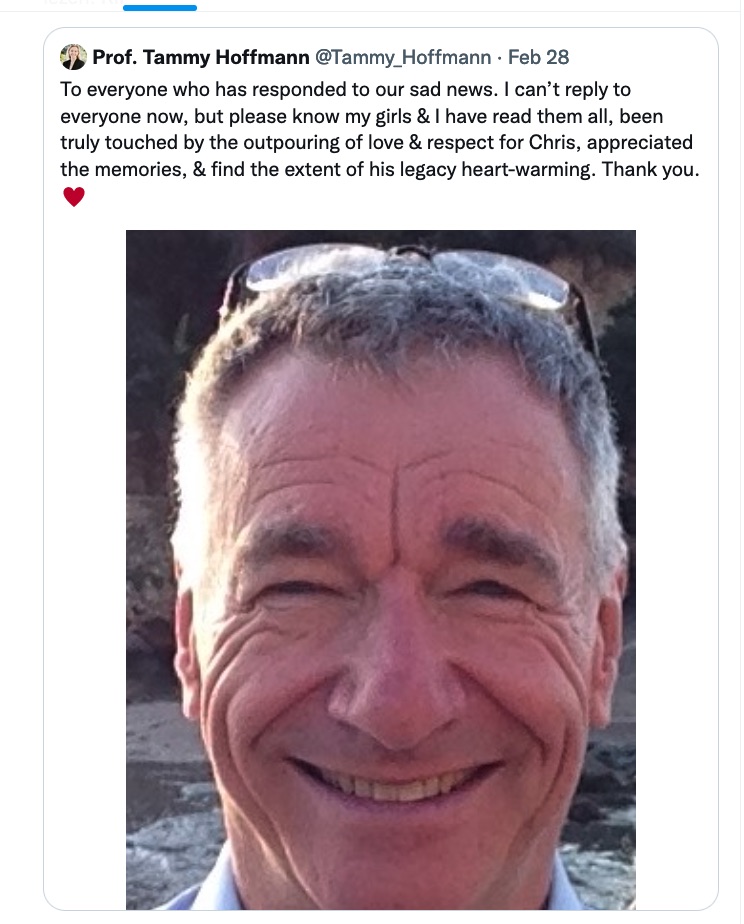 Croakey, 2017: Do clinicians have accurate expectations about how much treatments and tests can help or harm, by Professor Chris Del Mar and Professor Tammy Hoffmann

Croakey, 2010: Who are the most influential people in general practice?