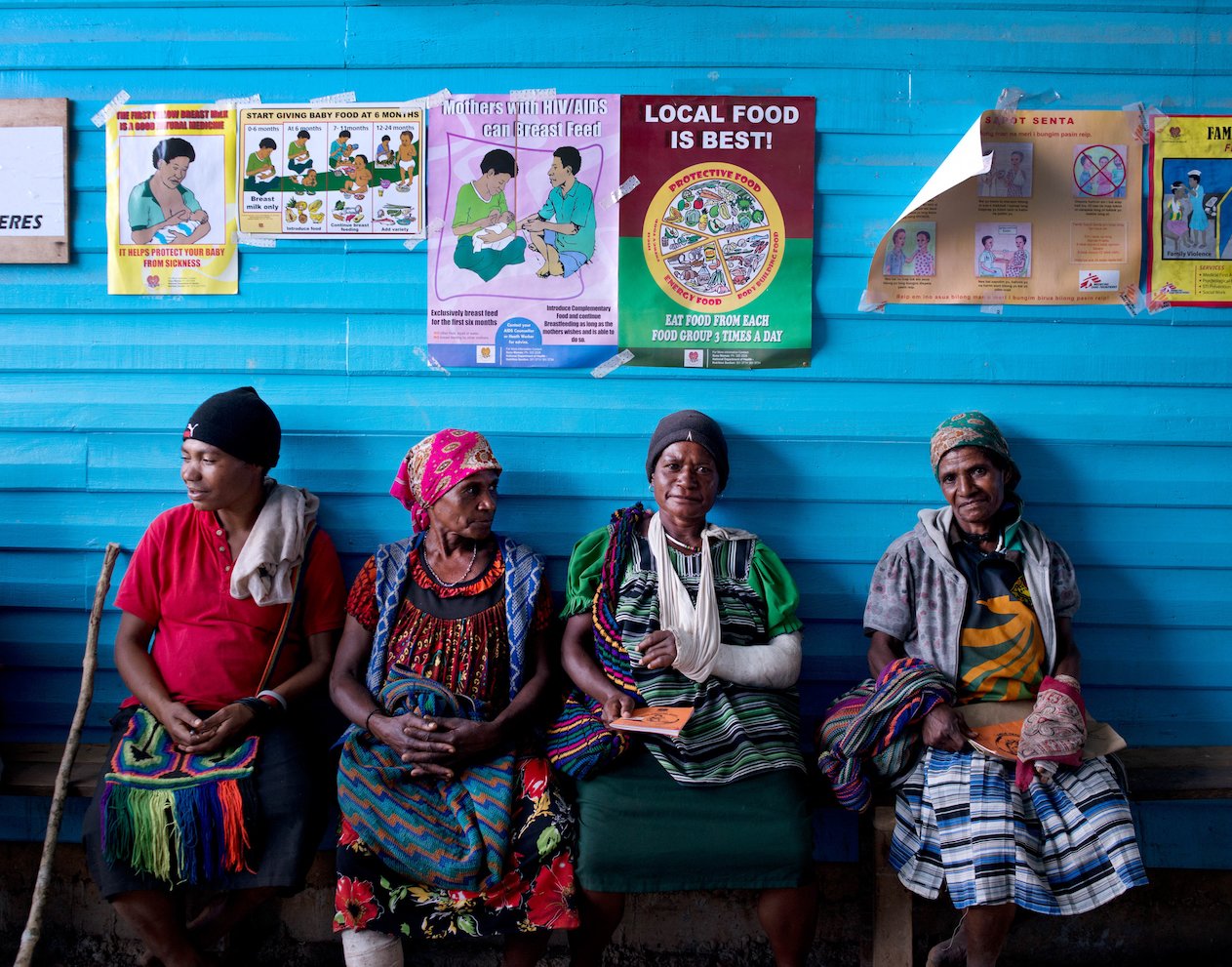 Awaiting treatment outside the Surgical Ward at Tari Hospital , MSF

MSF report: Women and children in PNG forced to return to abusers

Last week’s National Research Conference on Violence against Women and Children (covered by Croakey) brought together Australia’s leading academics, workers and advocates in the field to discuss the problem of, and possible solutions to, family and gender-based violence.

As we face our demons in Australia, the Return to Abuser report released today by Médecins Sans Frontières (MSF) highlights the plight of women and children in Papua New Guinea, where gaps in services and the justice system can see many who experience abuse with no choice but to return to their abusers for the cycle to begin all over again.

The report was drawn from more than 3,000 encounters between MSF workers and those experiencing of family and sexual violence in 2014-15.

The report comes as MSF prepares to hand over its final Family Support Centre in Papua New Guinea to local and national health authorities in March 2016, with medical teams planning to continue to focus on addressing the country’s Tuberculosis epidemic.

Below, Angelika Herb, MSF Head of Mission in PNG, describes the plight of some of these women and their children, and calls for increased support, in the form of medical and psychosocial services, access to accommodation in safe houses, and implementation of existing and pending child protection legislation.

Every day our medical teams in Papua New Guinea (PNG) treat women and children who are victims of family and sexual violence, many who remain trapped with their abuser due to the lack of a functioning protection system. Many plead with us not to go back to their families or communities.

While we do everything we can to find somewhere for them to stay, the reality is that, even for those who are brave enough to escape and speak out, we can’t promise them that they won’t have to return. This is because of the gross lack of services for protection.

One particularly devastating case was Joanne*, a severely malnourished mother, who came to one of our MSF-run Family Support Centres with her 10-month-old baby girl. After leaving her baby with the child’s father one day when she had to go out to beg for food, she returned to find the baby distressed.

The next morning, her daughter developed a fever and Joanne noticed that the baby’s genitals were swollen and bruised. Joanne immediately suspected the child’s father was the source of her baby’s distress, as some time ago, he had sexually abused her eldest daughter.

During her consultation with MSF, Joanne expressed her deep sense of hopelessness, believing there was nowhere she could go to escape the abuse. MSF staff tried to get both Joanne and her baby into short-term safe housing. However, every safe house was full. Joanne had no choice but to return home later that day.

Joanne eventually did find temporary accommodation in a safe house, but it didn’t provide financial assistance and safe-house rules require that children are never left unattended. Unable to leave the safe house without her baby to find work, or to beg, Joanne had no resources to get by. Eventually she returned with her child to her abusive partner.

This is not a unique story. Time and time again MSF healthcare workers in PNG witness the tragic impact of gaps in services and protection on survivors’ physical and mental health.  It’s heartbreaking for our staff to treat young children who have suffered sexual abuse at the hands of someone in their family, or community, knowing they will inevitably be returned to that abusive environment.

Rates of abuse in PNG are estimated to be some of the highest in the world outside a conflict zone. Since 2007 MSF has treated nearly 28,000 survivors of Family and Sexual Violence. During this time, we have seen some improvements in the recognition of Family and Sexual Violence and care for survivors. However, alarming gaps remain, especially in the areas of protection and justice.

In 2014 and 2015 some 3,056 people sought care for the first time in MSF-run Family Support Centres in the capital, Port Moresby, and in Tari, in the Highlands region. The overwhelming majority – 94 percent – of those patients were female. Nearly all had physical injuries requiring treatment. Children made up more than half of the sexual violence consultations, and around one in six of these was aged less than than five.

For many patients we treat, like Joanne, the latest instance of sexual violence was part of a repeated and ongoing pattern. They were returning home after their consultations even though they were at a clear risk of experiencing further violence. Indeed, 49 percent of patients who sought care following sexual violence said the abuse – in most cases, rape – occurred at home. The younger the survivor, the more likely it was that they were abused in the place where they should be safest: at home.

PNG has revised its Child Welfare Act (Lukautim Pikinini Act 2015) which mandates Child Protection Officers to prevent and respond to violence against children, including the power to remove a child from a situation where his or her health and safety is in immediate danger and to transfer the child to a licensed safe-house. However, while this protection exists in the legal system, it is not reality on the ground. The Act still needs to be certified by the Speaker of the House and there are no approved guidelines for safe houses. There are only six safe houses across the country, five of which are in the capital and none of which can legally accept unaccompanied minors.

As a result the vast majority of women and children in PNG – especially unaccompanied minors – who wish to leave abusive homes have nowhere to turn. Survivors are thus made ‘double victims’ – suffering first from the brutal attacks and then from failures in service provision and protection systems.

MSF’s work in Family Support Centres and hospitals in PNG over the past nine years has successfully shown that a quality, comprehensive response delivers essential and concrete benefits for survivors. While sexual, family and general violence remains high in Tari and the Highlands region, from April 2016 onwards, the Provincial Health Authorities will lead the response to meet the medical and psychological needs of survivors in the area. The handover to local and national health authorities means that survivors will still have access to these vital services.

If these positive steps are to continue, now is the time for the PNG government to urgently certify the Child Welfare Act and fast track its implementation.  As PNG’s neighbour, and largest donor, the Australian Government has a key role to play in this. It must use what influence it has to ensure this happens. Every moment that this is delayed more children will suffer repeat abuse.

PrevPreviousHow everyone’s research on violence against women should intersect with disability
NextTurn back from cruelty and indifference: Melissa Parke’s speech to ParliamentNext