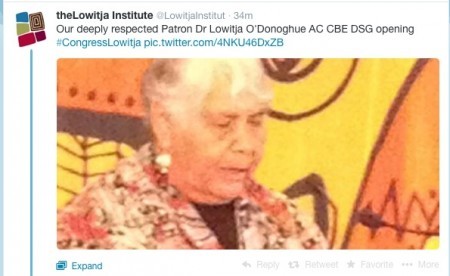 The two-day Congress Lowitja 2014: Many mobs, one vision: creating a healthy future was opened yesterday morning in Melbourne by the Institute’s patron,  Dr Lowitja O’Donoghue.

Warren Mundine, the chair of the Federal Government’s Indigenous Advisory Council, gave a keynote address, which raised more questions than it  answered about the future of Indigenous health services and funding.

“Health is across all three areas”, Mundine said, but admitted he had yet to meet with Health Minister Peter Dutton and was not clear on the status of the National Aboriginal and Torres Strait Islander health plan, launched by the Labor Government shortly before it lost office.

Speaking at the 2014 Congress Lowitja, the biennial conference of the Lowitja Institute – Australia’s national Indigenous health research body – Mundine won applause from the audience for his recent public stand against the proposed repeal of Section 18c of the Racial Discrimination Act.

Mundine said he was hopeful the Government would shift on the issue, if not back completely away, and that “repeal, we feel, would be dangerous and very much a disaster”. 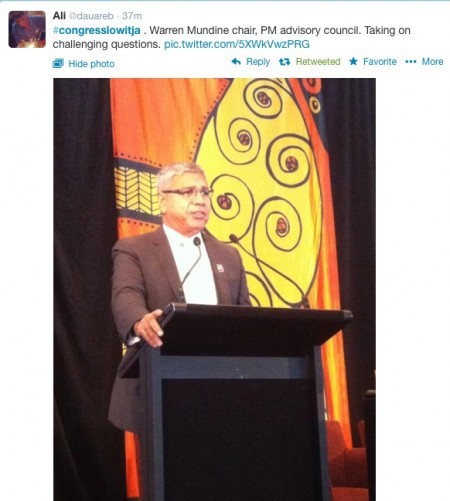 Mundine’s main messages to the conference were around the coming Federal Budget, saying he was aiming to convince the government not to make any overall cuts to Indigenous spending in return for significant savings to come from an “infrastructure audit” and in cutting a swathe through red tape which he says is the “greatest challenge” to Indigenous health policy and services.

He also responded to criticism in the Indigenous community that the Indigenous Advisory Council is not representative, saying it was not meant to be, but is a purely advisory body – “along the lines” of the Gonski Review, the Henry Tax Review, or the Commission of Audit which is currently looking at cuts across all government ahead of the May Budget.

But he said his stand on the Racial Discrimination Act was proof of its independence, and his described as “bizarre” shock columnist Andrew Bolt’s position on the issue.

His deputy on the Council, Professor Ngiare Brown – who heads research and is senior public health medical officer at the National Aboriginal Community Controlled Health Organisation (NACCHO)  – also expressed concern on the debate, which has seen the ABC and Indigenous academic Professor Marcia Langton apologise to Bolt.

Brown told Croakey that arguments about the Act should not be framed just in terms of freedom of speech but also through a health lens.

“If you’ve ever been discriminated against for any reason…you will know how that makes you feel, how much that diminished you, plays on your mind, makes you sweat, question your self-esteem and confidence. Multiply that by a lifetime and think about how that affects you, your physical, emotional wellbeing, mental health, how you engage with others, form relationships, see your place in the world and whether your valued or not. Think about that for children and tell me it doesn’t affect your health. Why should we, under the guise of self-expressions, allow that behaviour to be perpetrated?”

Brown said it was, of course, important to be able to freely explore ideas but she said there was a big difference “between asking a question because you want to know and understand or hiding behind freedom of speech to belittle and denigrate and to discriminate against others based on their race. That’s not intelligent public debate, that’s racism and bigotry…”

The issue of the Racial Discrimination Act will feature in today’s Congress Lowitja proceedings, with keynote addresses from Racial Discrimination Commissioner Tim Soutphommasane and Langton. A comedy event – ‘Is racism the new black?’ – featuring Charlie Pickering and Libbi Gore – will close the two-day event.

On the Racial Discrimination Act

Mundine said he had been approached by the Jewish Board of Deputies and the Chinese community to make public his opposition to the Federal Government’s controversial changes. He welcomed similar stands by Indigenous Liberal MP Ken Wyatt and National party MP Ewen Jones, reflecting a “strong cross section of Australian society” now coming out against the proposal.

As a result, he sensed there was some “traction” now.

“I think they’re barking up the wrong tree using the Bolt case as they reason why….I know Andrew Bolt personally, I’m very surprised he went down this racism rabbit warren. I just find it bizarre,” he said.  “I’m very confident that things won’t go necessarily the way the government is thinking on this matter, but I can’t guarantee it because I know the other side is very strong as well.”

On red tape and cuts

Mundine rejected criticism of the Federal Government for failing to establish a dedicated Aboriginal and Torres Strait Islander health portfolio as the previous Labor Government had, and for investing responsibility for Indigenous issues in the Prime Minister’s office.

Poorly targeted funding and waste on red tape and bureaucracy were the big issues, he said, saying a review that he and Indigenous Affairs Minister Nigel Scullion showed that “one third of funding for Aboriginal and Torres Strait islander programs do not pass the front door of office buildings in Canberra and other cities.”

Well targeted funding cuts did not necessarily produce an adverse impact, he said, warning: “Knee jerk reactions of outrage, without regard to actual outcomes…ultimately weaken the voice of criticism.

“For me it’s a simple proposition: the success of Aboriginal and Torres Strait islander health should be measured by outcome achieved, not volume received, not how many people involved, not how much activity, not the size of the department or whether you have a dedicated Minister.”

Mundine said the upcoming Budget was a major challenge and he had been “blessed” to have conversations with the Commission of Audit “looking at how we protect the budget numbers’” despite a number of cuts to Indigenous programs that have already been flagged, including legal services.

“I’m saying ‘don’t cut funds, I’ll give you longer-term savings,’” he said. “I’m arguing we need to keep the current Budget figures and then we can start reallocating (savings) to certain areas that we need: education, jobs, looking at the justice issues and so on.”

He was “pitching” on behalf of organisations like Aboriginal and Torres Strait Islander Legal Services to win a reprieve for their programs but said ultimately his focus would have to be on overall spend not individual programs that the government might choose to cut.

Prior to last September’s election, the Coalition was quoted as saying the National Aboriginal and Torres Strait Islander Health Plan was ‘another exercise in political spin’ and nothing more than ‘business as usual’.

Asked the status now of the plan, Mundine said: “Good question,” saying he had spoken about it with Scullion, but: “I haven’t had a chance for a meeting with Peter Dutton yet.”

Mundine said he was “very happy and very comfortable with the plan”, noting that Ngaire Brown was heavily involved in its development, “but again it gets back to the Budget”.

Brown confirmed the Council had been given “no clear indication either way” on the plan. While she said there was room for “tweaks” to improve the current plan, she suggested it would be hard for the government to develop a new one while criticising unnecessary bureaucracy . She said:

“We all understand very clearly that we can’t have any of the other positive outcomes across economic development, academic performance or attendance, if we don’t address wellbeing and good health for Aboriginal and Torres Strait Islander communities.

“It will certainly be my advice that we need a health plan that will get us where we need to be within a very defined timeframe….So let’s just move on, get it done.”

Brown said the Prime Minister’s three priority areas provided a “wide open window” to develop a health platform that underpinned them. “You can’t have any of those things if you’re not healthy.”

Role of the Indigenous Advisory Committee

Brown said being held responsible for the Federal Government’s actions on Indigenous issues was “going to be one of the most significant risks for us (on the Council).

“Irrespective of what we say or do or think, whatever comes out in public now through a government spokesperson or Minister will be attributed to us. That’s an enormous risk and we did think about that – it keeps me awake – but I need to trust that when I make a comment or have an opinion that I’m actually informed by the people I work for and I work for the community.

“They should use us as a conduit: give us the information, the evidence, the advice that (we) can pass on so at least policy makers will be making better decisions if not always the best decisions.”

Here are some of the questions the Twitterverse had for Mundine:

PrevPreviousWhat did the Marches in March reveal about community health concerns? And the global picture…
NextRural Innovations Changing HealthcareNext