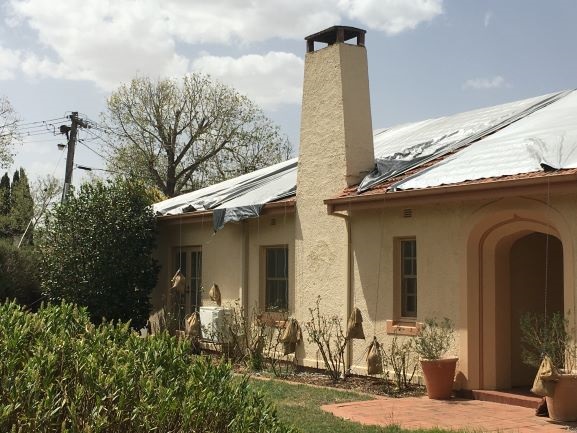 Looking on the "bright" side: Dr Sebastian Rosenberg

As recent Croakey articles have illustrated, the work of many health advocates into the future will be informed by the lived experience of this traumatic summer, including exposure to bushfires, hazardous smoke levels, heatwaves and other extreme weather events.

It was quite a summer. In December we went to the coast. It burned. Much of the beautiful natural environment and animals that live around us were destroyed. Luckily the caravan park we visit was saved.

We then went to Thredbo. As large plumes of bushfire smoke rolled down that valley, we evacuated a day before the Kosciusko National Park was closed.

We got back to Canberra, enduring day after day of thick, choking bushfire smoke blanketing the city. Hazardous levels are above 200. Canberra recorded 5000!

My office at the Australian National University was literally bombed – glass windows and skylights shattering, rain falling into the building.  My Corolla was one of thousands of cars with terrible damage and broken windows.

And then I got home to find that the hail had largely destroyed our roof and left our house badly damaged.

As I write this column, Canberra is under a state of emergency, with its southern suburbs under real threat from bushfire.

I regularly tweet bits and pieces about mental health. These tweets are sometimes read by hundreds and retweeted by dozens of people.

I tweeted the story I just related here, maybe as catharsis.

The response on Twitter was amazing – the message has been viewed more than 162,000 times, liked 2850 times and retweeted 900 times. My daughter accused me of ‘going viral’, though I am not sure this is a good thing.

Twitter, as with all media, likes a personal story. But people seem particularly alert to stories which highlight the impact of the weather and climate change on daily life.

What resonated, I think, was not the character-limited description of my crazy summer. No, I think what attracted people to this story was a shared concern and understanding that what happened to me could be considered a new normal.

Clear days in Canberra are unusual now. Fires now create their own weather. Forecasts alert residents to something called ‘mud rain’. Fires Near Me tops our list of bookmarked internet sites.

That narrow green ribbon of fertile land that runs down Australia’s south eastern edge and round towards South Australia is on fire. Friends in wet places, like Bellingen, are shocked to see nearby forests that have never burned now aflame.

Many Australians have been impacted, and unlike me, are now dealing with real loss and tragedy.

The Federal Government has announced a $76m package of mental health assistance, primarily to increase access to Medicare psychology support.

Let’s hope this support is effective. It would be good to check but I am not sure funding has been provided for evaluation.

Climate change is surely an important omission from the Productivity Commission’s draft report into mental health.

Beyond the task of dealing effectively with the real trauma associated with this summer’s weather, what about next summer?

How do we begin to orient our communities to this ‘new normal’?  What are the social and economic circumstances people need to cope with climate changes?

Regional economies have been devastated. It looks to me (based on personal experience) as though the recovery services provided by insurance companies fail to draw on local tradespeople. Companies have their own teams instead.

Regional employment, housing and social supports have been badly damaged. The social determinants of health seem doubly significant in the face of climate change.

We know that extreme heat and humidity can initiate or exacerbate mental health problems among people already suffering from mental illness and stress-related disorders.

But this also affects everyone. The trauma related to extreme weather events brings a significant risk of mental health problems.

This is surely the first thing we need to do: acknowledge that climate change affects us psychologically.

This means acknowledging our shared, changed circumstances and the grave threats arising.

It requires consideration of how people protect themselves, not only from fire but from mental illnesses like depression and anxiety.

Australia’s response to mental illness is already poor, at least in most places. Mental health promotion and prevention are the weakest elements in this already weak system.

Can we build community mental health action plans so regions can feel more in control of these changed circumstances? This applies to governments, businesses and individuals. It applies to workplaces and homes.

The impact of climate change on mental health is real. The response must go beyond this emergency.

We need longer term thinking about what this means for Australian communities, not just those affected this summer.

A critical part of this longer-term thinking must be to monitor the impact of climate-related change, anxiety and trauma on kids.

Australia has an opportunity to lead the world in the design of new approaches to help communities and people adapt, cope and flourish, even as they face this new normal.

Mental health professionals, policymakers and service providers can play an important role. Consumers and carers already know the ingredients of resilience. Listen to them.

Summer has traditionally been a time when Australians power down, recharge and reconnect with family and friends at the beach or bush. This has been taken away from us this year.

Nostalgia could be defined as homesickness when separated from a loved home.

Back in 2007, Australian philosopher Glenn Albrecht and colleagues explored the impact of bushfires and mining on Australian communities and coined the term ‘solastalgia’ – the distress produced by environmental change impacting on people while they are directly connected to their home environment.

After consecutive days over 40 degrees, one night recently was the hottest minimum temperature ever recorded in Canberra.

My summer has not been traditional. It has been stressful and grim.

My summer left me solastalgic. Places I love, like the coast, the mountains and Canberra, are not the same as they used to be. They may never be the same.

On the bright side, the tarpaulins covering my house are holding up so far – thanks to the SES! But the hail absolutely shredded my citrus trees.

I hope I haven’t lost my place in the insurance claim webchat “service” line. I was number 73. Better get back to it.

Bookmark this link to track Croakey’s coverage of the bushfire crisis.