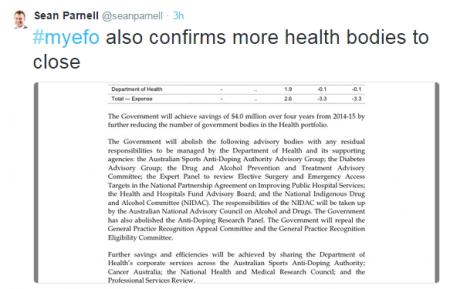 Australia’s leading international aid organisations have responded with dismay to another round of drastic cuts to foreign aid announced in the Federal Government’s Mid-year Economic and Fiscal Outlook (MYEFO), which also contains news of more cuts to health agencies.

Treasurer Joe Hockey said foreign aid had taken “by far” the biggest hit in the latest cuts to Budget spending: another $3.7 billion cut today, on top of the $7.6 billion announced in the May budget – a total of $11.3 billion of cuts announced this year.

CARE Australia CEO Dr Julia Newton‐Howes said in a statement the Government was continuing to use Australia’s aid program “as a piggy bank to be raided”, by contrast with likeminded countries such as the UK, Germany and Japan which have all increased their international aid budgets.

Dr Newton‐Howes said what was particularly disappointing was the Treasurer’s insistence that foreign aid was being cut in order to support additional national security initiatives.

“International aid is one of the most cost‐effective investments in the security and stability of our region. It promotes prosperity, economic growth and above all, saves lives.

“The Ebola crisis has demonstrated how poverty can quickly become a national security threat. The best way to secure Australia’s future is to be a good global citizen that invests in internationally‐agreed levels of funding to help solve global problems such as poverty and climate change,” Dr Newton‐Howes said.

Calling for Australian foreign aid spending to be subject to formal Parliamentary or legislative insight, Plan International Australia agreed the Ebola crisis was a vital lesson.

“It is impossible to understand how these latest cuts ‘take the long view’. What sort of a legacy is the government leaving for the governments that will inevitably follow? How will they repair the damage being done right now?” it said in a statement.

“The government can choose to invest now or pay later. Just look at West Africa and the Ebola crisis: investment in the region’s health system could have prevented Ebola, in turn seeing off a threat to the rest of the world.”

The Federal Opposition said $1 billion per year in foreign aid cuts “is the equivalent of cutting our entire country aid programs to our largest recipients, Indonesia and Papua New Guinea”:

Closer to home. the MYEFO confirmed further hits to health agencies and programs, with this list below (click on the images to enlarge) – detailed in full in Appendix A of this statement by the Finance Minister Mathias Cormann.

There was also bad news about the de-funding of  the Indigenous and Remote Eye Health Service (IRIS), an initiative of the Australian Society of Ophthalmologists that was established with a $5 million outlay by the former Labor Government.

And today’s list of cuts included the National Indigenous Drug and Alcohol Committee. The Federal Government announced on Sunday that the Australian National Council on Drugs will be renamed as the Australian National Advisory Council on Alcohol and Drugs (ANACAD), to be headed by former Nationals MP Kay Hulls and asked to make abuse of the drug crystal methamphetamine or “ice” their top priority. Assistant Health Minister Fiona Nash said the new council will include for the first time a dedicated specialist on indigenous drug and alcohol abuse, Professor Ted Wilkes.

For reaction to last week’s big health shifts, see this piece from The Conversation: Why scrape the barnacles off a ship of fools? and some Twitter reaction to MYEFO below. See also this post from The Mandarin about further restrictions on the number of government agencies. More reaction and analysis will be added to this post as it comes in. And, there’s more to come. 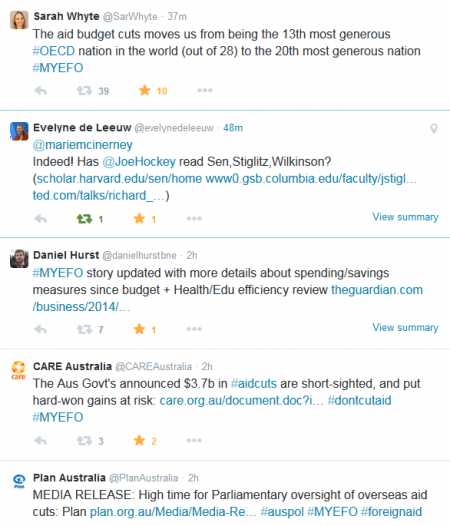