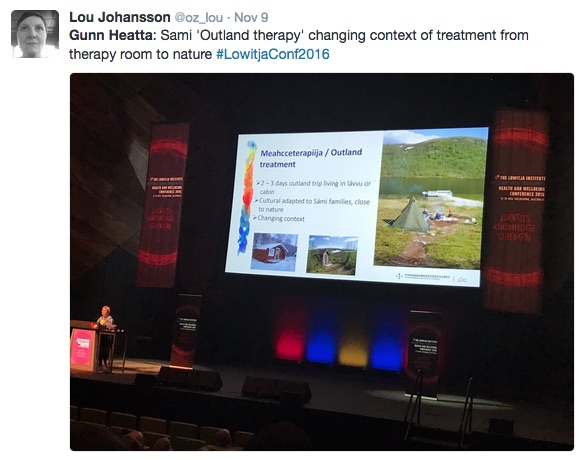 Nature provides a therapeutic setting for the Indigenous Sámi peoples

In Norway, the Indigenous Sámi peoples are returning to cultural practices on country, as part of moves to develop better health and to tackle mental health and substance abuse issues.

The move towards nature-based therapy that embeds Sámi norms and values was profiled in a keynote presentation to the Lowitja Institute International Indigenous Health and Wellbeing Conference 2016 in Melbourne last week.

Young people and their extended families are learning to master traditional skills like building and sleeping in snow caves in Arctic temperatures under programs being created by a unique Indigenous Sámi health service in Norway.

Gunn Heatta, an Indigenous Sámi woman from the northern part of Norway, said the programs bring Sámi families together, out into wilderness areas, to address mental health and substance abuse issues. 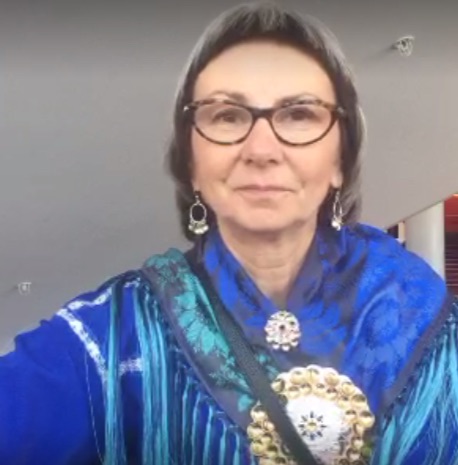 At the core of the programs are Sámi values, including the concept of “narrideapmi” or “soft teasing” – “not teasing to make others feel bad but to make them laugh” – and the focus on the collective over the individual, with a much broader sense of extended family than in mainstream Norwegian society, including for the elderly and those with disability.

“We share the catch,” she said, explaining that she is Aunty to her cousin’s children.

The programs are part of a growing reclamation of Sámi culture and embedding of Sámi norms and values in healthcare in a region where many Sámi people often don’t know they are Sámi or are “ashamed” to admit it because of past and current discrimination, she said.

“They come in like a Norwegian family and they go out as a Sámi family,” said Heatta, who heads the Sámi Norwegian Advisory Unit for Mental Health and Substance Use (known as SANKS), the only service and organisation of its type for Sámi people.

Yet the programs still struggle in the mainstream Norwegian health system to assert their rights to culturally appropriate and safe interventions, and to self-determination, she said.

Heatta told the conference that Sámi people, who live in the northern areas of Norway, Sweden, and Finland and on the Kola Peninsula in Russia, have not generally suffered the violence inflicted on many other Indigenous peoples under colonisation.

However, she said, a history of forced assimilation, ethnic discrimination, and continuing loss of land – with the threats today from mining, tourism, wind farms and climate change – have led to an extinction of language and culture for many Sámi people.

“Most Sámi don’t speak their own language anymore, and a lot of Sámi people do not know they are Sámi people or don’t want to tell that they are,” she said.

“It’s been very shameful to be Sámi,” she said, explaining that, prior to World War Two, researchers had measured the shape of Sámi people’s skulls to declare them the “lowest on the scale”.

Now, she said, many young people are discovering they are Sámi and are beginning to assert their culture more strongly, often in the face of family opposition.

The population of Sámi people, who share different language groups and cultural practices, across Scandinavia is officially estimated at 100,000, although it is believed to be higher.

Norway was the first country to ratify the protection of land rights pursuant to the International Labour Organisation’s Convention No. 169 concerning Indigenous and Tribal Peoples (which Australia has yet to sign), and the Sámi Parliament recently celebrated its 25th anniversary.

However, the United Nations reports that Sámi people experience ten times more discrimination than ethnic Norwegians, that their language is severely threatened, and that Norway has only narrowly interpreted the ILO provision of “ownership and possession”.

Heatta said SANKS also struggles still to convince mainstream Norwegian services of the need to take different cultural approaches for Sámi people and has yet to be able to incorporate Elders and traditional medicines as much as it wants into care models.

Patients often use traditional healers “but many of our therapists don’t dare to document that you are talking about these sorts of things,” she said.

“In Norway, it’s a welfare state system and very important (to the system) that everything should be just exactly the same,” she said.

“But when you are Indigenous that’s not good enough: we want the result (of health interventions) to be the same, but we can’t do it in the same way. This is very difficult to explain in Norway.”

Learning by doing, together

Thus there has been the move to go “on country”, out into the wilderness areas where the culture is based, to bring together very extended families – not just siblings and parents, but often full ‘blended’ families – for weeks at a time.

“You pass it on by doing it together,” she said of Sámi cultural values and practices.

Heatta outlined two programs that take participants out into nature, where they stay in Sámi tents (lavvu) or cabins, and talk while working side by side to catch fish and prepare traditional foods.

Education is given a big focus so that children and young people don’t fall behind – SANKS teachers liaise with a child’s school, but then also tap into nature as well.

She described one mother sitting around the fire, sharing dinner in a Sámi tent and saying “this was the kind of food we had often at home when I was a child”. It was the first time she had told her family she was a Sámi.

“We are changing the context for treatment from the therapy room to the nature,” she said.

“Since this is more familiar to the family, they become the experts, not the therapists… It gives them a feeling of mastery of situations.”

Watch this interview with Gunn Heatta at the conference. 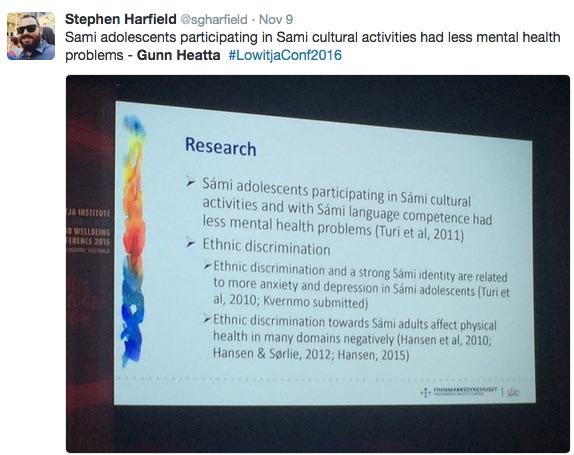 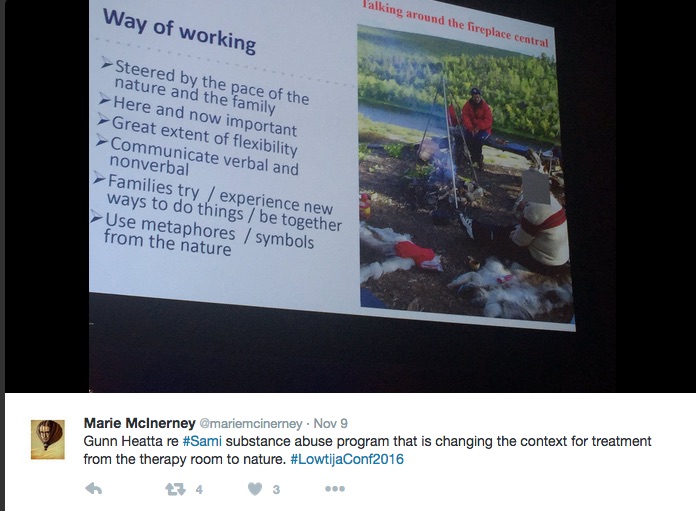 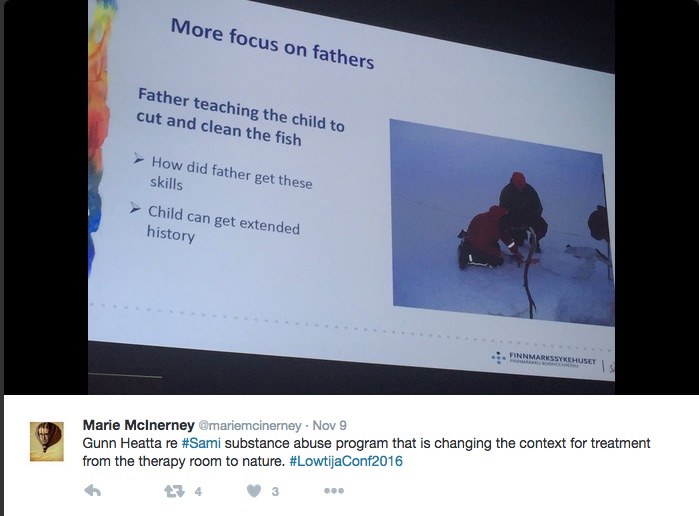 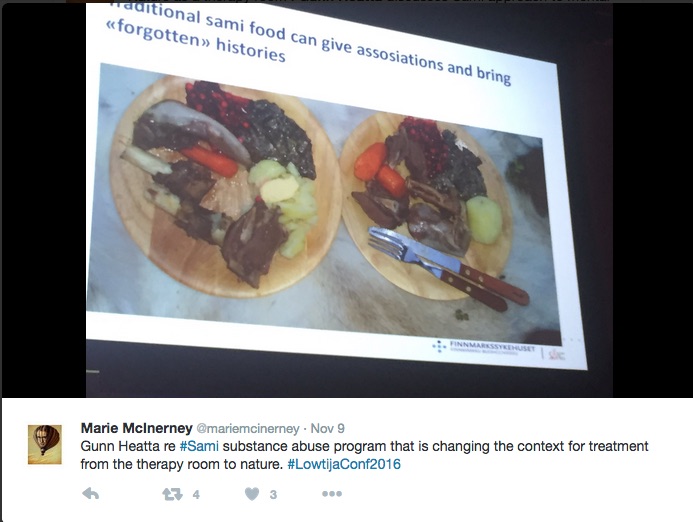 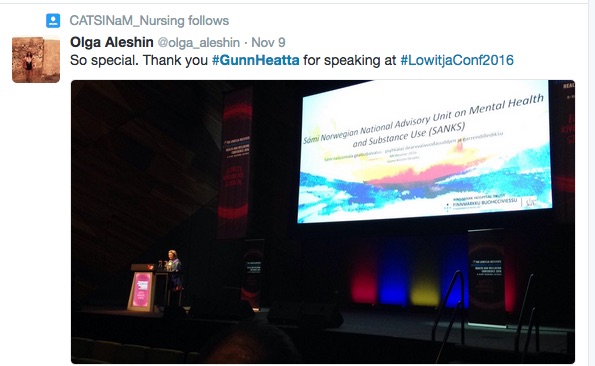