What if end-stage kidney disease was far more common among the rich and powerful than among those who are not so privileged?

What if powerful politicians and their friends – people like John Howard, Tony Abbott, Gina Rinehart, George Pell, Adam Giles, Andrew Bolt, Julie Bishop, Joe Hockey, or Christopher Pyne had to move far, far away from their family and support networks in order to access dialysis? 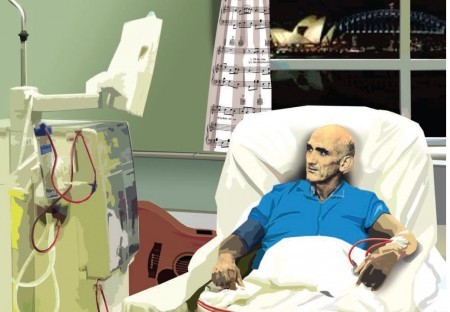 What if the actor Cate Blanchett or the musician Paul Kelly were unable to get treatment for a life-threatening condition because of argy-bargy between various levels of government?

A new exibition by Darwin-based artists Therese Ritchie and Chips Mackinolty invites us to consider these questions.

The catalogue for Get well soon! A diagnosis, with an extended discussion on end-stage kidney disease, can be seen here. Don’t miss it.

Whether we like to admit it or not, artists often deal in clichés—sometimes to praise or reflect them; at other times to bury them.

To the small extent that Australian artists (along with journalists, commentators and politicians) have dealt with Aboriginal health issues at all, we often find ourselves wallowing in the visual and written clichés of victimhood, inequality, suffering and despair.

In our practice over many years, we have perhaps erred on the other side in trying to avoid these archetypes—not least in looking at Aboriginal health.

And as graphic artists, we have tried to look towards solutions, from immunisation to management of asthma; issues surrounding transplantation; and from the role of Aboriginal Health Workers to community control of primary health care and beyond.

At an artists’ floortalk in Adelaide for our retrospective, we were asked what our next joint venture might be. One or other of us suggested the next show, after Not dead yet, would be called Palliative care. A throwaway line. The idea lingered on and off for a few years.

It wasn’t our personal prospective of palliative care we looked at, but the situation of Aboriginal people in remote areas of the Northern Territory, South and Western Australia who face potential life sentences with end stage kidney disease; people who as young as 22 years old face a dire future. For hundreds of Aboriginal people this is not palliative care, but “last chance” care.

It’s a disease experienced in remote areas at 30 times the national rate.

A life “on the machine”; a life waiting for the possibility of a transplant; a life moreover that largely involves removal from kin and country in a dwindling existence that affects family and community alike. Over the years, we have lost many Aboriginal friends with end stage kidney disease.

On a Darwin verandah, the idea took hold. We decided to turn the idea of victimhood on its head, and imagine new potential victims.

We wondered if things might not be different if prominent Australians—from the Arts to Media to Politics, all with the potential to affect public opinion and policy—had end stage kidney disease themselves: waiting for a transplant, and struggling as “suitable cases for treatment”.

And existing “on the machine” for 5 hours a day, three times a week.

That they might not be “suitable cases for treatment” for this exhibition.

That they might not wish to “get well soon!”

That it might not cause them to think about the experience of so many others.

And act on that information.

None of the subjects of their work in this exhibition have been approached to agree to being depicted other than us, of course.

There are 14 images, equaling the number of the Stations of the Cross: a random number in one sense. There could have been many more people prominent Australians depicted.

They all should know better.

• Chips Mackinolty does not currently gain any income from health organisations. In the past he has worked as Manager Research Advocacy Policy for the Aboriginal Medical Services Alliance [2009-2013] and was involved in the establishment of the Katherine-based Sunrise Health Service [1999-2001], and has served pro bono on the boards of General Practice Network NT and NT General Practice Education; and was involved with planning processes for the establishment of the NT Medicare Local. He is a member of the MEAA, and in the past has freelanced for Fairfax, News Limited, The Bulletin and others. He worked for the NT Government 2002-2009 in non-health related fields.

• Therese Ritchie occasionally freelances for Aboriginal community controlled health organisations, and has worked on projects funded through the NT Department of Health.