Detail of the cover of a new book, reviewed below

When the late Professor Tony McMichael AO died in 2014, he was working on a new book, Climate Change and the Health of Nations.

The book, since edited and updated by former colleague Professor Alistair Woodward from University of Auckland and Dr Cameron Muir from the ANU, was officially launched at the ANU in Canberra on Tuesday evening.

Below is the first of two reviews that Croakey plans to publish – perhaps readers will be inspired to send copies to Presidents, Prime Ministers and Health Ministers who might benefit from this “rigorous, innovative, and fascinating exploration of how the climate affects the human condition”. 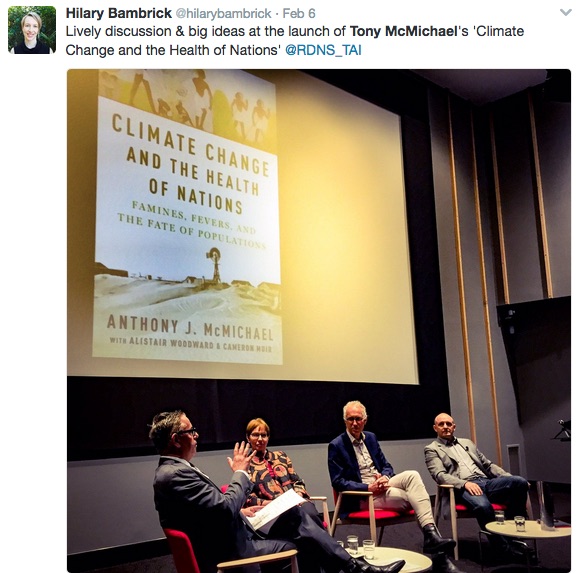 The challenge thrown down by the late Tony McMichael is to view the entire history of earth and the development of mankind through the lens of climate and its impact on the environment and human health.

Conceptually, it is a mammoth undertaking. However, the challenge has been met brilliantly.

McMichael and his co-authors have also thrown down the gauntlet to use this history regarding the impacts of climate changes that have taken place over centuries and millennia to imagine a meaning for the future.

This is a future where predictions more than double the changing of the climate. And they do so, not over millennia, but over just a short century.

For Tony McMichael, in particular, and his co-authors, who have brought this treatise together after his death, this is about looking to the quality of the lives of his grandchildren and the generations to follow.

I first came across Tony McMichael in the late 1990s when he was appointed Director of the National Centre for Epidemiology and Population Health a short time after I had completed a Master’s Degree at that prestigious Centre at the Australian National University.

I had accepted the role of Health Minister in the Australian Capital Territory and was curious why McMichael was so focussed on health and climate change when issues such as mental health were so pressing.

On reflection, it is fortunate that there are some giants in our society who are able to look well beyond the immediate and the pressing to warn about the long-term impacts of our current actions on future health.

Looking at health from an historic perspective and framed around climate change raises a wide range of issues. Failure of crops, tolerance of heat and cold, migrations of peoples, the impact of climate on infectious diseases such as typhoid, the Bubonic plague, measles and malaria, the impact on social unrest, instability in society with consequential war and civil strife, the migration of infections with rodents and other animals, the impact on habitat and the consequential impact on human health – all these issues fit into this scholarly historical framing, with important lessons for the future.

From the introduction there is a warning about “the likely risks to humans and their communities – especially the risks to population health, survival, and social stability”. But there is also hope – “despite the economic stranglehold exerted by the fossil fuel industry, for example, renewable energy systems are now evolving rapidly”.

The growth of human populations through the emergence of human societies through the period of the Holocene carries many lessons, but not as many as the development of “human domination”, or the Anthropocene, and its significant impact over the last two hundred years.

The broader influences on human health are not lost. The authors write: “Today, infectious diseases are overwhelmingly concentrated in the world’s poor, marginalized, and crowded populations. Their ready spread reflects low literacy, poor hygiene, ineffective sanitation, and, often, disordered social relations— all of which bear on future health prospects under climate change conditions”.

Changes in climate have historically had a major, more immediate impact on the poor and the marginalised, while taking longer to reach the upper echelons of societies. The ruling classes, the wealthy and the educated have been slow to react in the past with dire long-term consequences – at first for others in their societies and, eventually, for themselves.

The lens is climate change. However, the authors have kept the historical context in perspective at the same time as pointing out “the consequences for human population health are amplified by social and political mismanagement and turmoil”.

We can expect climate change to act as a “force multiplier,” exacerbating many of the world’s health problems.

And for those who also have an interest in the impacts of climate, there is so much to learn, so much that is put into context, and so much that simply makes sense.

Unlike other ideas being circulated internationally at this time, the arguments, the insights and the judgements are all supported by sound evidence. 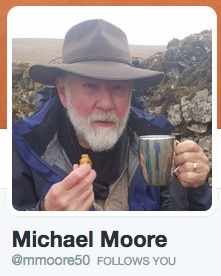 Croakey contributor and #WonkyHealth columnist Dr Tim Senior will share his thoughts on the book in a later article. Meanwhile, some other reviewers’ comments follow below. 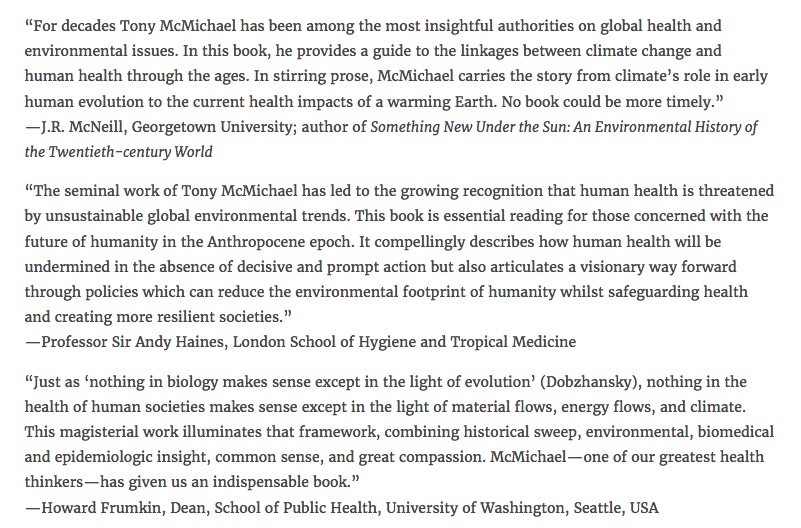 • Paying tribute to Professor Tony McMichael, one of the world’s public health champions 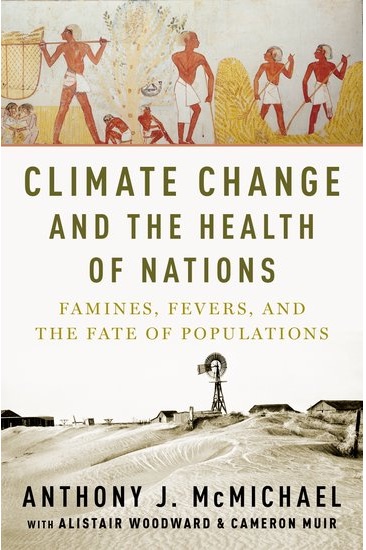