A creative global campaign that is pushing for major system changes to tackle non-communicable diseases will feature at the Festival of Ideas in Melbourne next week.

As Judy Slape, a Master of Public Health Student at University of Melbourne and Health Communications Officer for NCDFREE reports below, the campaign is urging a rethink of urban design, healthcare and a regulatory environment that promotes unhealthy food and drinks. 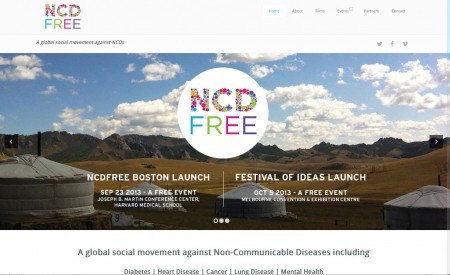 We’ve all heard about surging rates of Non-Communicable Diseases (NCDs) or so called ‘life-style diseases’ here in the West – NCDs like cancer, heart-disease and diabetes have been public enemy number one since we met Norm and the Life. Be In It campaign in 1975.

What is less publicised is the devastating speed at which these same diseases are afflicting the developing world. The rapid introduction of highly processed food together with more sedentary lifestyles has led to an explosion in rates of obesity, diabetes, heart disease and cancer in densely populated emerging economies.

Forget HIV/AIDS and Malaria – NCDs are now the leading cause of death across the globe, killing 36 million people each year. Often thought to be affecting only rich, old, lazy men, the true face of the epidemic is actually likely to be female, living in Asia, under 70, living in poverty and with poor access to healthcare.

This is where NCDFREE steps in.  NCDFREE is the brain-child of Melbourne brothers Alessandro and Giuseppe Demaio who have combined their talents as a doctor and designer respectively to help redefine the global narrative for this group of misunderstood diseases.

Alessandro Demaio explains that “this disconnect between perception and reality permeates all levels of society and government – and is a barrier to investment, prevention and meaningful healthcare responses.”

The campaign was developed during a breakfast table conversation, with Alessandro lamenting the losing battle facing public health advocates around the inequity of high-calorie, low nutrition foods being marketed to consumers. Giuseppe saw it from a different angle – he saw it as a branding issue.

Together they have worked energetically to connect a network of global citizens via the Young Professionals Chronic Disease Network – supporting those affected by and solving NCDs in the planet’s poorest communities.

They crowd-funded $60,000 to make three short advocacy films: one focusing on Mongolia, one on Ghana and one for the World Health Organisation.

The messages portrayed through the films are simple and optimistic: 80% of NCD related deaths are preventable and there are some fantastic young leaders in health throughout the world. Through celebrating the stories they aim to help a larger audience understand the challenges and opportunities- and how everyone can play a role.

NCDFREE is launching its global campaign first at Harvard University and then right here in Melbourne on October 5th as part of the University of Melbourne, Festival of Ideas.

The Melbourne event will see six young NCD change-makers from around the world taking to the stage to give eight-minute TED talk-style presentations, designed to inspire their audience to adopt and promote policy that works.

Topics will range from the economics and urban planning behind NCDs to issues of reconnecting with our food as well as what’s happening here in outback Australia.

The Saturday night event will also see the debut of the crowd-funded short-films, a Q&A with the speakers and a buffet of local artists, comedians and musical acts.

NCDFREE hopes to take the ideas generated in this engaging and interactive forum and create an immediate roadmap for real action against this global epidemic.

Alessandro describes how “we need system change. We need to rethink the way we design cities and make them conducive to health, and our healthcare system to focus on prevention and primary care. We need to reconnect with food and teach food skills to young kids. We need to take back our urban environment and stop letting it become an advertising space for food and drink companies selling us unhealthy choices.”

Overwhelming demand has seen initial tickets snapped up in a matter of days.

In response the brothers have decided to create an open-air, live stream event right outside on the grassy banks of the Yarra. This outdoor event encourages people to bring a picnic blanket, grab a bite from one of the food trucks and then sit back ready to soak up the inspiring talks and entertainment.

• For more information please go to www.ncdfree.org and you can book tickets to NCDFREE Launch here.

• Judy Slape is a Master of Public Health Student at University of Melbourne and Health Communications Officer for NCDFREE.