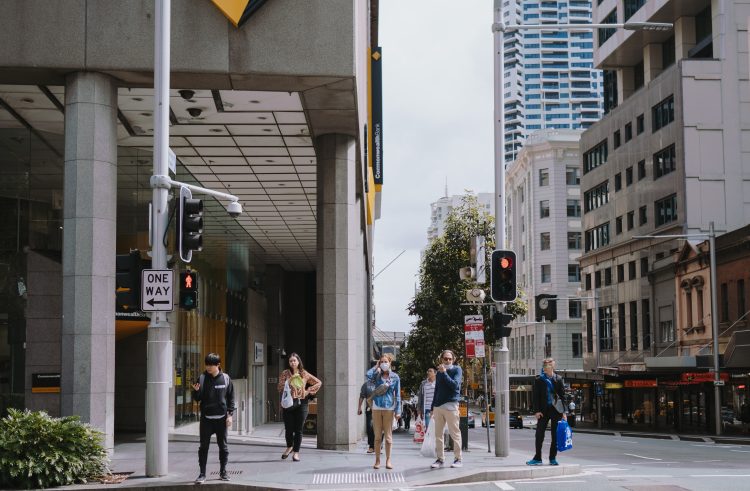 The most socioeconomically disadvantaged Australians were almost four times more likely to die from COVID-19 as the wealthiest in society and people in residential aged care were significantly overrepresented, according to a special new report looking at the direct and indirect health impacts of the pandemic in 2020.

The Australian Institute of Health and Welfare report, published Friday, detailed the many and varied impacts of the COVID-19 first and second waves in Australia last year on the population and our health care system.

It detailed a clear social gradient to the pandemic, with age-standardised mortality 2.6 times higher in the lowest socioeconomic quintile compared with the highest, and a fourfold gap in the rates of death between the most and least advantaged groups. 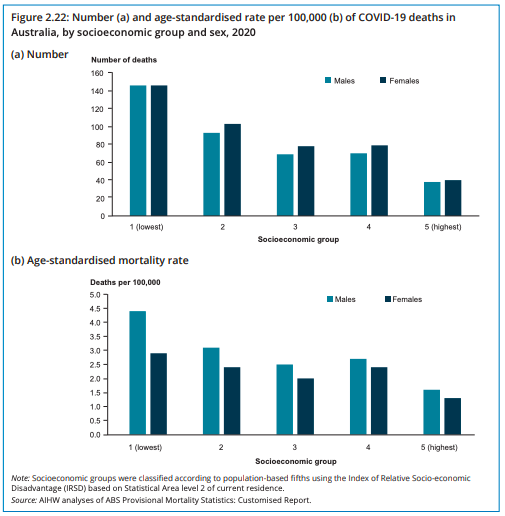 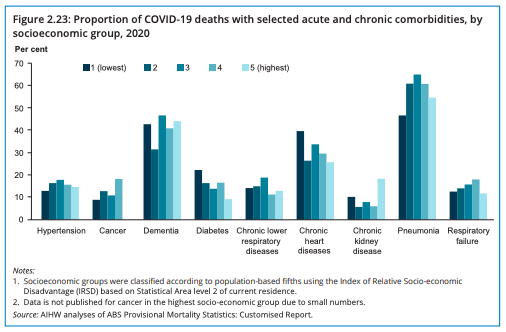 The report also explores how the pandemic and public health responses, underpinned by extensive lockdowns in some parts of the country along with the closure of schools and other essential civic infrastructure, influenced the upstream determinants of health for Australians.

It found that first-time experiences of family and domestic violence increased, along with reports of child abuse and neglect, with mental health suffering but — thankfully — suicides holding steady. Mental distress appeared to have subsided, on average across the population, back to pre-pandemic levels, but remained elevated among young people.

Loneliness increased, and a significant number — some transiently, others more lasting — experienced under or unemployment (1 in 5 Australians at the first wave peak in April 2020) and housing stress (doubling of the population proportion from seven to 15 percent).

While the report was prepared before and does not reflect the significant Delta-driven Sydney third wave surge, the AIHW’s Moon said it offered important insights for our ongoing response.

“As the COVID-19 situation continues to evolve rapidly and we face challenges such as the emergence of new variants of the virus, it is important we look holistically at the direct and indirect health effects of the pandemic on Australians,” said Moon.

Along with socioeconomic deprivation, it highlights residential aged care residents and health care workers as at disproportionate risk during the pandemic.

Health care workers were 2.7 times more likely to contract COVID-19 compared with the general population, and 69 percent of those in the health sector who got sick during Victoria’s second wave contracted it at work.

In stark contrast to events unfolding in several Aboriginal communities across NSW at the time of writing, the AIHW report found that in 2020 Aboriginal and Torres Strait Islander peoples comprised just 0.5 percent of cases, with 153 confirmed infections and no fatalities among this at-risk population as at April 25. This was in large part due to early and concerted action by Elders and communities, in partnership with governments, the report said.

The report compares Australia’s experiences of COVID in 2020 with international counterparts that have similar population profiles, life expectancy, health care systems and expenditure, finding we fared exceedingly well on severe impacts and deaths.

Conversely, had we done as well as neighbouring New Zealand in suppressing the virus, the report finds we would have seen 18,000 fewer cases and 780 fewer deaths.

According to the AIHW there were 8,400 disability-adjusted life years lost in Australia to COVID in 2019 — 97 percent of which was due to fatal cases. In terms of total burden of disease, this ranks it at 135 of 219 conditions, contrasted with things like coronary heart disease (312,000 DALYs annually) and other respiratory infections (80,500).

This compares with a number of far worse-hit countries like Scotland, where COVID-19 was second only to CHD in terms of burden of disease in 2020.

The report noted that we are yet to fully understand the true extent or ongoing impact of so-called long COVID, but pointed to Australian data suggesting that the proportion of infected people who go on to be chronically ill is around five percent.

In terms of impacts on the health care system, the report found that Australia’s stated aim of flattening the curve to protect hospitals was achieved, with around 12.5 percent of cases hospitalised.

Mortality rates overall were reduced compared with the last five years. Deaths from influenza and other respiratory conditions were markedly lower, particularly in the winter months, a welcome byproduct of increased emphasis on hygiene, distancing, masking and staying home when sick.

There were fewer injuries from falls and car accidents and fewer deaths on the road, and ED presentations fell across most triage categories (down 38 percent overall across the last three weeks of March last year and 1.4 percent across the year), though there were exceptions.

Some health services such as optometry saw marked declines in access at the height of the pandemic last year and on average across the year (down 8.1 percent). Mammography dropped off significantly (145,000 fewer patients screened in the first half of last year compared to previous) but rebounded in the second half, while patterns in bowel and cervical screening were more difficult to discern.

Elective surgery was down almost 10 percent last year (9.2 percent in semi-urgent procedures, 18.2 percent in the non-urgent category). At the peak, surgeries in Australia were down 34 percent compared with the same period in the previous year.

GP visits subsidised by Medicare increased overall last year by 3.4 percent, a similar trend to previous years, but chronic disease item numbers dropped off for a period, recovering in time to just above pre-pandemic levels. Telehealth played a major role in maintaining service provision, accounting for 36 percent of primary care consults across the year and 33 percent of mental health services.

Prescriptions filled increased sharply in March last year (23 percent), reflecting a degree of medicines hoarding in anticipation of prolonged lockdown. This dropped across following months to return to pre-pandemic levels. Respiratory medicines accounted for the largest increase; prescriptions were down about one percent overall last year.