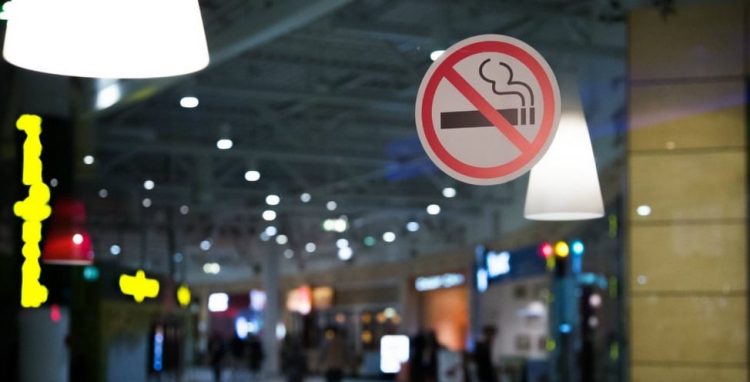 Credit for image: WHO

The increasing market power of tobacco companies is identified as an important public health challenge in a major new report on the economics of tobacco control, from the US National Cancer Institute and World Health Organization.

The monograph, The Economics of Tobacco and Tobacco Control, highlights the burden of tobacco on low and middle income countries, which are now home to about 80 per cent of the world’s smokers.

The report, a collaborative effort involving more than 60 authors and more than 70 reviewers, will no doubt prove a useful resource for researchers, advocates and policy makers alike.

It also includes considerable detail on Australia’s tobacco control history and successes (see graph below regarding the impact of plain packaging). 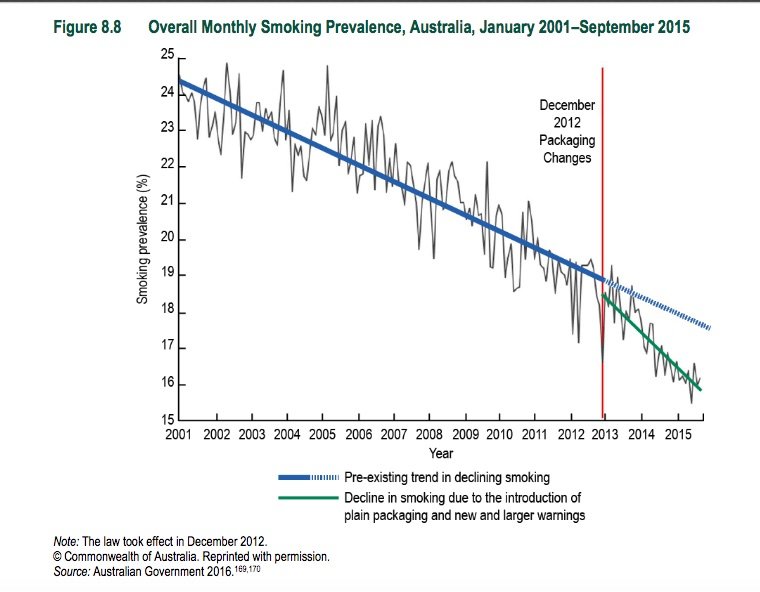 The report says the market power of tobacco companies has increased in recent years, reflecting the same forces that have contributed to globalisation in other industries, including reductions in barriers to trade and foreign direct investment, privatisation of state-owned tobacco enterprises, and a wave of mergers and acquisitions.

As of 2014, five tobacco companies accounted for 85 percent of the global cigarette market.

“Policies aimed at limiting the market power of tobacco companies are largely untested but hold promise for reducing tobacco use,” says the report.

It also argues that tobacco control is an effective tool for addressing poverty and health disparities. It says:

…tobacco use contributes to poverty, as illnesses caused by tobacco lead to increased health care spending and reduced income.

Research indicates that tobacco control interventions lead to reductions in tobacco use among all population groups.

Additionally, significant increases in tax and price lead to greater reductions in tobacco use among the poor than among the rich, and thus contribute to reducing health disparities.”

Tobacco is the only legal product that kills a large proportion of its consumers when used as intended by its manufacturers.

Below is the WHO news release. Download the full report here.

Tobacco control can save billions of dollars and millions of lives

10 January 2017 | GENEVA – Policies to control tobacco use, including tobacco tax and price increases, can generate significant government revenues for health and development work, according to a new landmark global report from WHO and the National Cancer Institute of the United States of America. 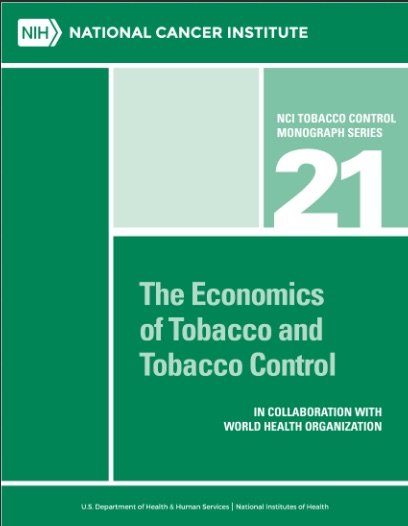 Such measures can also greatly reduce tobacco use and protect people’s health from the world’s leading killers, such as cancers and heart disease.

But left unchecked, the tobacco industry and the deadly impact of its products cost the world’s economies more than US$ 1 trillion annually in healthcare expenditures and lost productivity, according to findings published in The economics of tobacco and tobacco control.

Currently, around 6 million people die annually as a result of tobacco use, with most living in developing countries.

“The economic impact of tobacco on countries, and the general public, is huge, as this new report shows,” says Dr Oleg Chestnov, WHO’s Assistant Director-General for Noncommunicable Diseases (NCDs) and mental health.

“The tobacco industry produces and markets products that kill millions of people prematurely, rob households of finances that could have been used for food and education, and impose immense healthcare costs on families, communities and countries.”

Globally, there are 1.1 billion tobacco smokers aged 15 or older, with around 80% living in low- and middle-income countries. Approximately 226 million smokers live in poverty.

The monograph, citing a 2016 study, states that annual excise revenues from cigarettes globally could increase by 47%, or US$ 140 billion, if all countries raised excise taxes by about US$ 0.80 per pack. Additionally, this tax increase would raise cigarette retail prices on average by 42%, leading to a 9% decline in smoking rates and up to 66 million fewer adult smokers.

“The research summarized in this monograph confirms that evidence-based tobacco control interventions make sense from an economic as well as a public health standpoint,” says the monograph’s co-editor, Distinguished Professor Frank Chaloupka, of the Department of Economics at the University of Illinois at Chicago.

The monograph’s major conclusions include:

The global health and economic burden of tobacco use is enormous and is increasingly borne by low- and middle-income countries (LMICs). Around 80% of the world’s smokers live in LMICs.

Effective policy and programmatic interventions exist to reduce demand for tobacco products and the death, disease, and economic costs resulting from their use, but these interventions are underused. The WHO Framework Convention on Tobacco Control (WHO FCTC) provides an evidence-based framework for government action to reduce tobacco use.

Control of illicit trade in tobacco products is the key supply-side policy to reduce tobacco use and its health and economic consequences. In many countries, high levels of corruption, lack of commitment to addressing illicit trade, and ineffective customs and tax administration, have an equal or greater role in driving tax evasion than do product tax and pricing. The WHO FCTC Protocol to Eliminate Illicit Trade in Tobacco Products applies tools, like an international tracking and tracing system, to secure the tobacco supply chain. Experience from many countries shows illicit trade can be successfully addressed, even when tobacco taxes and prices are raised, resulting in increased tax revenues and reduced tobacco use.

Tobacco control does not harm economies: The number of jobs dependent on tobacco has been falling in most countries, largely due to technological innovation and privatization of once state-owned manufacturing. Tobacco control measures will, therefore, have a modest impact on related employment, and not cause net job losses in the vast majority of countries. Programmes substituting tobacco for other crops offer growers alternative farming options.

Tobacco control reduces the disproportionate health and economic burden that tobacco use imposes on the poor. Tobacco use is increasingly concentrated among the poor and other vulnerable groups.

Progress is being made in controlling the global tobacco epidemic, but concerted efforts are needed to ensure progress is maintained or accelerated. In most regions, tobacco use prevalence is stagnant or falling. But increasing tobacco use in some regions, and the potential for increase in others, threatens to undermine global progress in tobacco control.

“This report shows how lives can be saved and economies can prosper when governments implement cost-effective, proven measures, like significantly increasing taxes and prices on tobacco products, and banning tobacco marketing and smoking in public,” he adds.

NCDs account for the deaths of around 16 million people prematurely (before their 70th birthdays) every year. Reducing tobacco use plays a major role in global efforts to achieve the Sustainable Development Goal of reducing premature deaths from NCDs by one-third by 2030.

PrevPreviousA veritable feast of healthy reading – recommending some timely LongReads
NextSharing a postcard from Sheffield, with some tips for building healthy communitiesNext