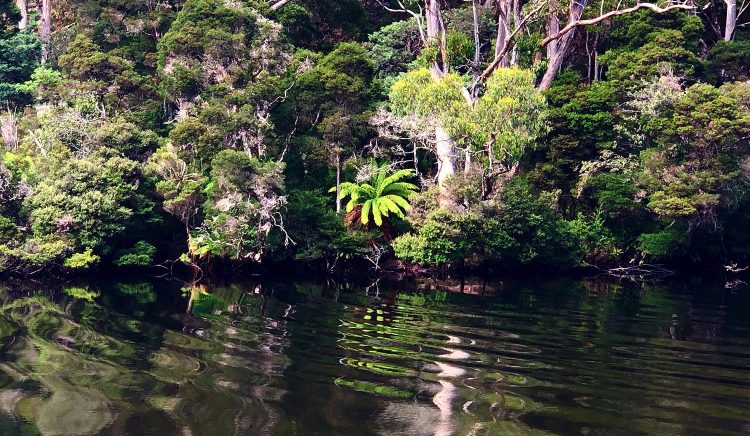 The importance of Indigenous and local knowledges for the world’s responses to climate change is highlighted in a report released this week by the Intergovernmental Panel on Climate Change (IPCC).

“Indigenous Peoples have been faced with adaptation challenges for centuries and have developed strategies for resilience in changing environments that can enrich and strengthen current and future adaptation efforts,” it says.

As well, Indigenous knowledge and local knowledge are important for ensuring that climate action does not cause further harm, and also addresses historical injustices committed against Indigenous Peoples and other groups.

The report, which highlights the immense global challenges ahead and an urgent need to step up adaptation efforts, also puts a big focus on the importance of climate justice and addressing historic and ongoing inequities as part of climate change responses.

It argues for inclusive, participatory governance of climate change adaptation to help minimise the risk of “maladaptation”, which occurs when responses to climate change make the problem worse or exacerbate inequities, especially for marginalised groups.

“Researchers and practitioners are increasingly impatient to address the root causes of vulnerability and use inclusive climate adaptation processes to generate effective adaptation responses for marginalised and misrecognised groups,” says the report, ‘AR6 Climate Change 2022: Impacts, Adaptation and Vulnerability’.

The report also stresses the importance of taking a justice and equity lens in adapting to the climate crisis. It urges paying attention to inequity in climate vulnerability and responses, the role of power and participation in processes of implementation, unequal and differential impacts, and climate justice.

The report says climate change threatens to increase poverty and inequality, undermine progress in meetings sustainable development goals, and strain civil institutions – all factors that contribute to the emergence or worsening of civil unrest and conflict.

It cites evidence of maladaptation increasing across many sectors and regions, often resulting from actions that focus on sectors and risks in isolation and on short-term gains.

Maladaptive responses to climate change can create lock-ins of vulnerability, exposure and risks that are difficult and expensive to change, and exacerbate existing inequalities, and decrease biodiversity and ecosystem resilience to climate change.

“Maladaptation is the opposite of successful adaptation which is associated with reduction of climate risks and vulnerabilities for humans and ecosystems, increased wellbeing, and co-benefits with other sustainable development objectives.” 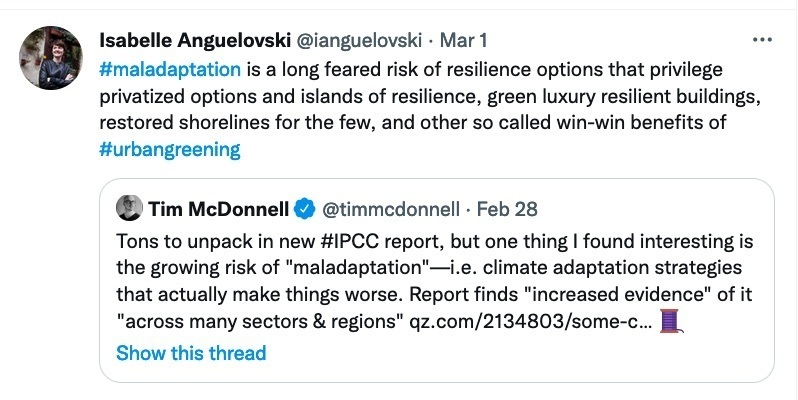 The timing of the report – in a week of destructive floods in Australia and catastrophic war in Europe – underscores the immensity of the public health threats it identifies and the criticality of urgent action.

But the Federal Government’s failure to engage meaningfully with the report also underscores another of its findings: that governments in Australia and elsewhere are far from doing all that is needed to ensure adaptation, for the health and safety of current and future generations.

“Most observed adaptation is fragmented, small in scale, incremental, sector-specific, designed to respond to current impacts or near-term risks, and focused more on planning rather than implementation,” says the report, predicting that at current rates of adaptation planning and implementation, the adaptation gap will continue to grow.

It notes that adaptation can generate multiple additional benefits such as improving agricultural productivity, innovation, health and well-being, food security, livelihood, and biodiversity conservation as well as reduction of risks and damages.

“With proactive, timely, and effective adaptation, many risks for human health and wellbeing could be reduced and some potentially avoided,” it says.

In Australasia, the report says climate impacts are cascading and compounding across sectors and socio-economic and natural systems, and current adaptation is “largely incremental and reactive”.

It cites as an example the 2019-2020 south eastern Australian wildfires, which burned 5.8 to 8.1 million hectares, with 114 listed threatened species losing at least half of their habitat and 49 losing over 80 percent, over 3,000 houses destroyed, 33 people killed, a further 429 deaths and 3,230 hospitalisations due to cardiovascular or respiratory conditions, $1.95 billion in health costs, $2.3 billion in insured losses, and $3.6 billion in losses for tourism, hospitality, agriculture and forestry.

It gives many examples of how knowledge systems and practices of Indigenous Peoples in different parts of the world are adapting to climatic changes.

“Their beliefs, value systems, and principles include core elements and common values such as reciprocity, solidarity, co-responsibility, and community that are expressed in the dynamism of their knowledge system,” says the report.

“The relevance of these knowledge systems, which are holistic and tied to relationships between all living things, cannot be ignored at this critical time.”

Honouring the United Nations’ Declaration on the Rights of Indigenous Peoples and social justice values would support self-determination and the associated opportunity for Indigenous people in Australia to develop adaptation responses to climate change, it says.

“The Uluru Statement from the Heart proposes a pathway and roadmap forward for enhanced representation of Aboriginal and Torres Strait Islander Peoples in decision-making in Australia,” it says. 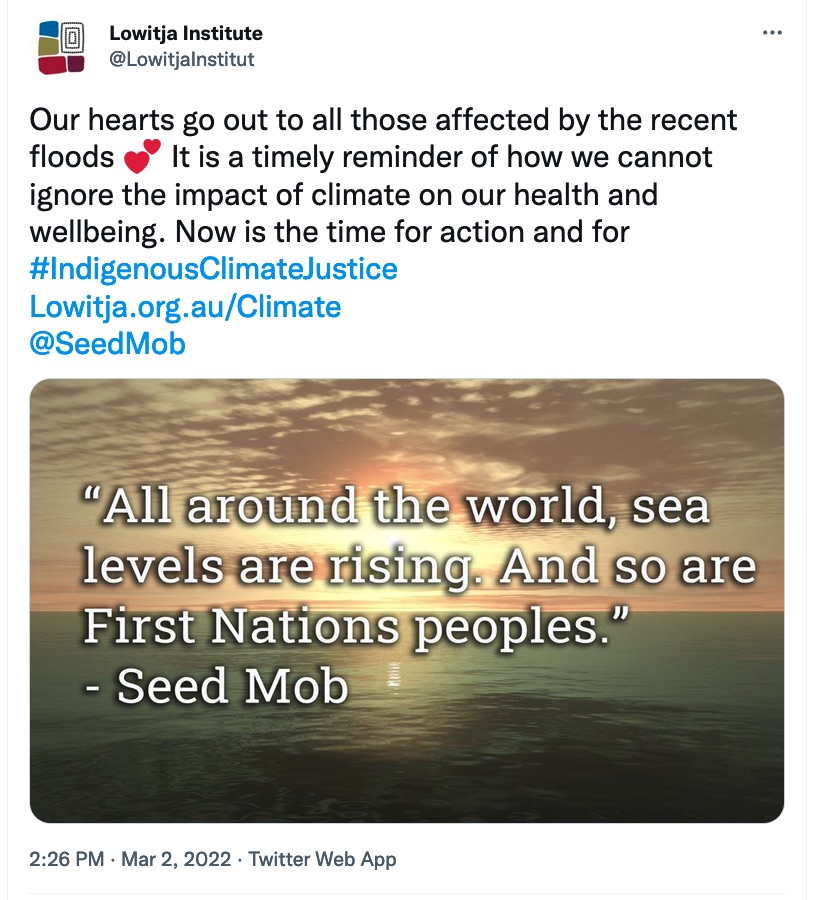 The here and now

The report’s descriptions of the impacts of climate change upon the health and viability of diverse ecosystems and species, as well as the physical and mental health of humans, is a compelling reminder of the need to stop speaking of climate change as some future event.

It details impacts on people around the world, saying about 3.3 to 3.6 billion people live in contexts that are highly vulnerable to climate change. West, Central and East Africa, South Asia, Central and South America, Small Island Developing States and the Arctic are “global hotspots of high human vulnerability”.

Between 2010-2020, the death rate of people from floods, droughts and storms was 15 times higher in highly vulnerable regions, compared to regions with very low vulnerability.

The report’s chapter on health details a wide range of impacts that will be well known to many Croakey readers, including heatwaves, infectious diseases, disasters, cardiovascular and respiratory distress, as well as effects on health services and infrastructure from extreme events such as floods.

Professor Lauren Rickards, a Lead Author of the IPCC and a human geographer and ecologist at RMIT University who works primarily on climate change futures, told a Climate and Health Alliance webinar this week that it was important to understand the report is based on existing academic research and was thus an underestimate of the problems.

“That research is vast and authoritative, but it is not a simple window on the world,” she said.

“Because research follows funding priorities and other factors, empirical research is increasingly hard, and researchers are having trouble keeping up with the proliferating changes, many, many impacts and positive adaptations are not accounted for.”

Therefore the report necessarily underestimates the far-reaching ways climate change is pervading our lives – as well as the diverse adaptive capacities and responses that exist.

“The upshot is that the situation is likely more serious AND more promising than we realise,” she said. 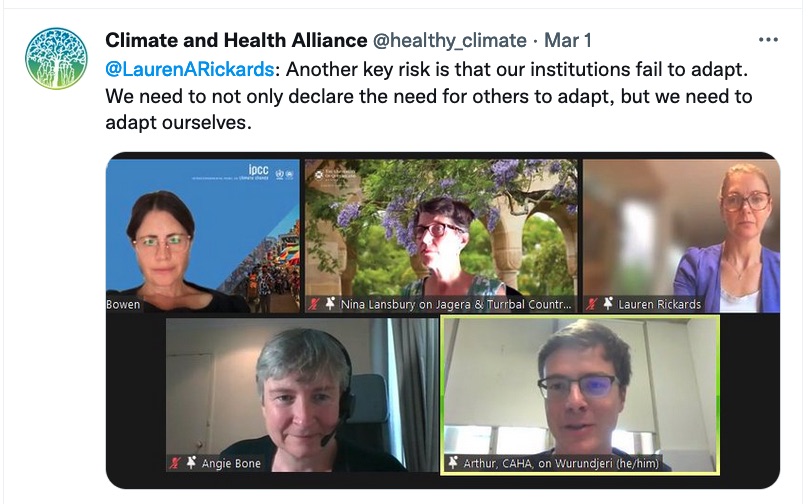 Below are some of the adaptation solutions described in the report.

• Enhancing natural water retention such as by restoring wetlands and rivers, land use planning such as no build zones or upstream forest management, can further reduce flood risk.

• Agro-ecological principles and practices, ecosystem-based management in fisheries and aquaculture, and other approaches that work with natural processes support food security, nutrition, health and well-being, livelihoods and biodiversity, sustainability and ecosystem services.

• Conservation, protection and restoration of terrestrial, freshwater, coastal and ocean ecosystems, together with targeted management to adapt to unavoidable impacts of climate change, reduces the vulnerability of biodiversity to climate change.

• Considering climate change impacts and risks in the design and planning of urban and rural settlements and infrastructure is critical.

• Integrating climate adaptation into social protection programs, including cash transfers and public works programmes, is highly feasible and increases resilience to climate change, especially when supported by basic services and infrastructure. Social safety nets are increasingly being reconfigured to build adaptive capacities of the most vulnerable in rural and also urban communities

• Health and well-being would benefit from integrated adaptation approaches that mainstream health into food, livelihoods, social protection, infrastructure, water and sanitation policies requiring collaboration and coordination at all scales of governance.

• Climate resilient development is facilitated by international cooperation and by governments at all levels working with communities, civil society, educational bodies, scientific and other institutions, media, investors and businesses; and by developing partnerships with traditionally marginalised groups, including women, youth, Indigenous Peoples, local communities and ethnic minorities.

• Food systems that emphasise healthy, plant-centred diets reduce emissions in the agricultural sector while helping in the fight against  malnutrition.

The cumulative scientific evidence is unequivocal: Climate change is a threat to human well-being and planetary health. Any further delay in concerted anticipatory global action on adaptation and mitigation will miss a brief and rapidly closing window of opportunity to secure a liveable and sustainable future for all.” 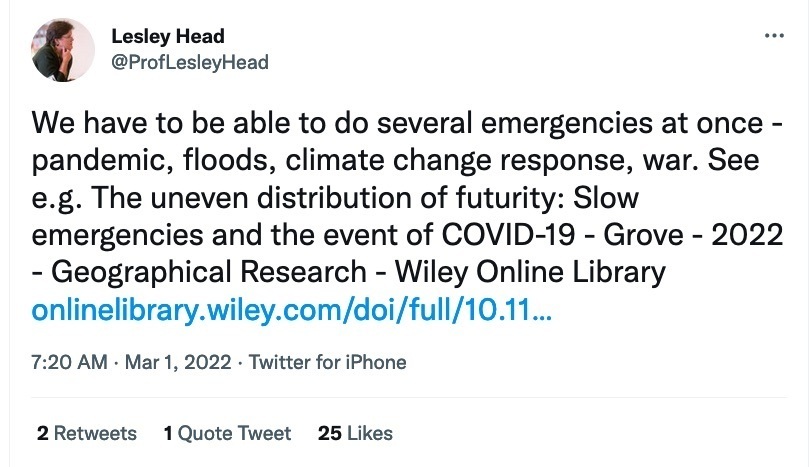 Read the article mentioned above here. 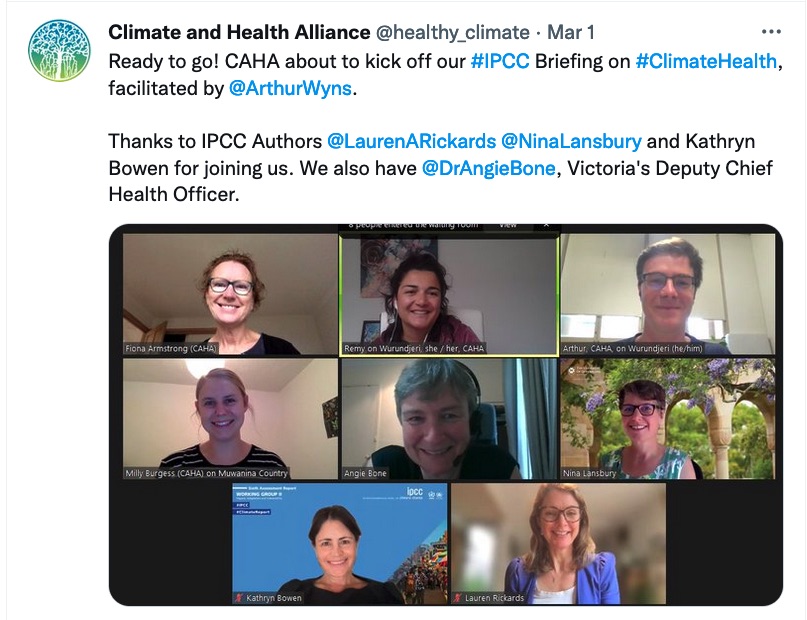 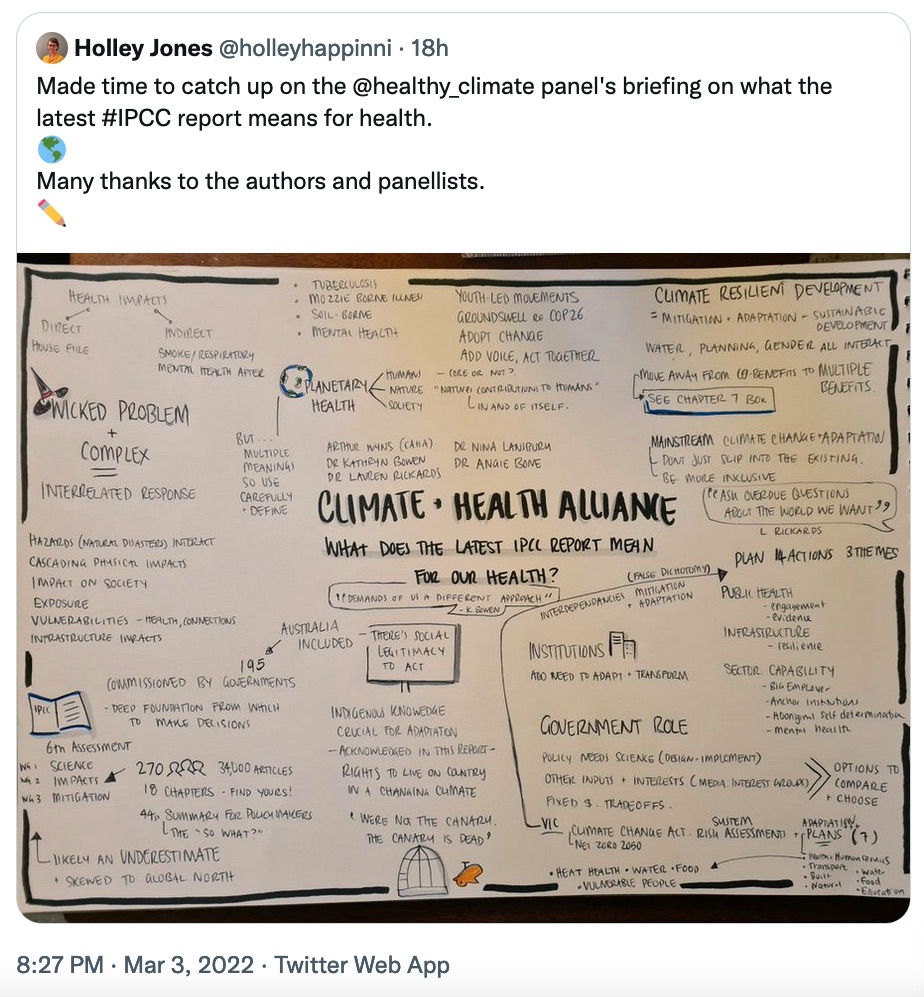 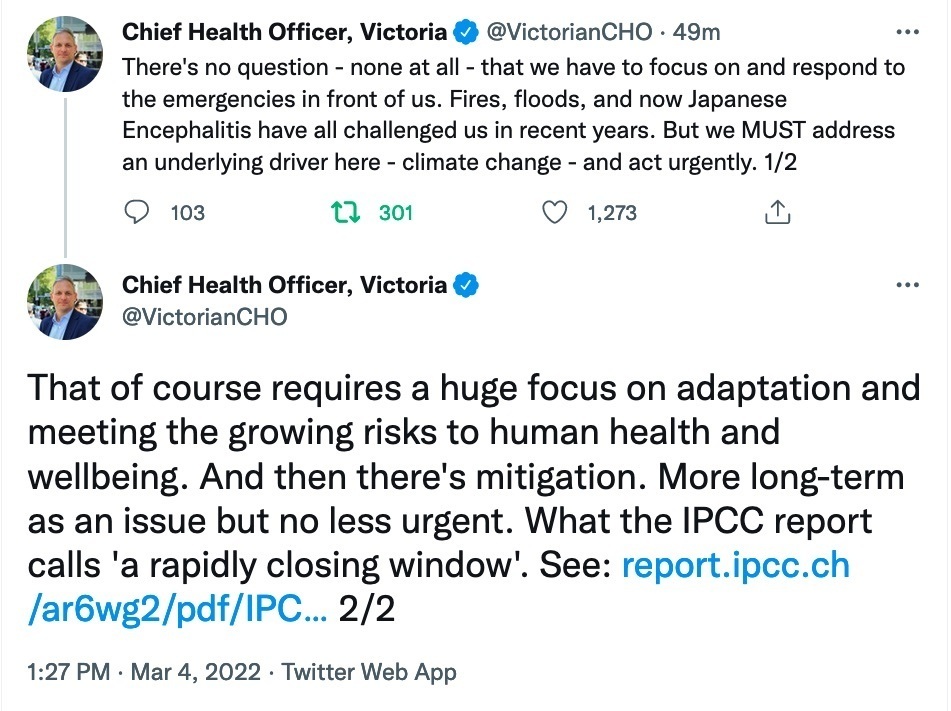 Read the Climate and Health Alliance response to the IPCC report. Watch the webinar video below.

Additional tweets and links were added to this article on 4 March.

PrevPreviousForty years later, what the COVID response failed to learn from HIV/AIDS
NextWhat’s on the health agenda for the South Australian election?Next