“Health spending growth slowest since the 1980s” says the headline on a media release issued by the Australian Institute of Health and Welfare today about a new report, Health expenditure Australia 2012-13.

“This is the lowest growth the AIHW has recorded since it began the Health expenditure Australia series in the mid-1980s, and more than three times lower than the average growth over the last decade (5.1%),” said AIHW Director and CEO David Kalisch.

In the article below, a senior health policy analyst and regular Croakey contributor, who writes under the pen-name of “William Foggin”, says the report suggests the Government’s much-promoted concerns about Medicare being “unsustainable” are an “ideological confection” – just like the “budget emergency”.

When I worked as a wage slave in the Commonwealth bureaucracy, the annual release of the AIHW’s Health Expenditure Bulletin was something of an event.

The data would be pored over and summarised for presentation to the Minister, question time briefings would be updated, and standard words reshaped as required.

I presume this still goes on.  The problem bureaucrats will face this year is that the data are not consistent with the Commonwealth government’s preferred narrative about health expenditure, which goes something like:

So what has the Institute found in its latest report? Briefly: 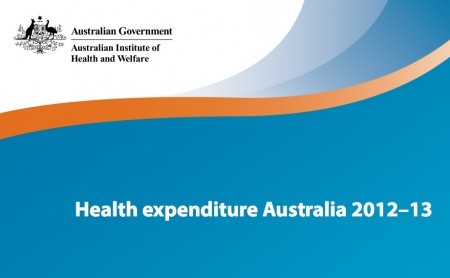 Total health expenditure in 2012-13 was 1.5% higher in real terms than the previous year: “the lowest growth that the AIHW has recorded since the mid 1980s, when [it] first began the Health expenditure Australia series” (p5).

Total Government funding fell in real terms by 0.9%, largely because Commonwealth expenditure fell by a real 2.4% (p19).  (Commonwealth expenditure actually fell slightly in nominal terms – although there are once-off factors driving this, which I will discuss later).  Although State government spending grew by 1.4% in real terms, this was much lower than the long-term trend of 5.6%.

At the same time total non-government spending in 2012-13 grew by 7.2% in real terms.  Individual out-of-pocket payments on a per capita basis increased by 4.6% in real terms (p54).

So if individuals are paying more and governments less, why do we need to transfer more of the burden to individuals through higher co-payments?

The reduction in Commonwealth spending was partly due to prepayments of private health insurance premiums in 2011-12 by policy holders who were about to be means-tested out of the rebate, and hence would not receive a benefit in future years; and partly due to the termination in December 2012 of the $1 billion a year and growing Chronic Disease Dental Scheme, which was replaced from 1 January 2014 by the $600m a year Child Dental Benefits Schedule.

As a result, from 2011-12 to 2012-13 expenditure on the rebate and on dental services fell by $233m and $113m respectively (p77-8).   But even netting off these reductions, Commonwealth expenditure grew by less than 0.5% in nominal terms, and still went backwards in real terms.

More significantly, Commonwealth expenditure on the PBS declined between 2011-12 and 2012-13 by a nominal 1.6% or $130m – and there were no once-off policy changes driving this decline.  So what is the case for increased individual contributions to the cost of medicines?

While the nominal decline from 2011-12 to 2012-13 in total Commonwealth expenditure may not be replicable, the less than real growth may be if it is driven by factors such as systemic reductions in PBS spending.

One measure of sustainability is the ratio of health expenditure to taxation revenue.  For the Commonwealth, this ratio has continued to fall from the immediate post-GFC peak of 29% in 2009-10 to 25% (p15).  On this basis the Commonwealth is finding it easier than it used to be to fund health expenditure.  While the ratio has yet to reach the pre-GFC ratio of 21.5%, it is heading in the right direction.  Where was that sustainability crisis again?

Successive Treasury Intergenerational Reports have warned of the effect of the ageing population on health spending.  Yet in 2012-13 per capita spending on health declined marginally in real terms ( by $17 or 0.3%: p.19) – even while the population continued to age at the same rate.  Ageing crisis, anybody?

Given the Government’s decision to change public hospital funding arrangements from 2017-18 to revert to a (meanly) indexed block grant, it is interesting to observe what happened over the decade to 2012-13 under a more generously indexed block grant, with a once-off addition to the base in 2008.  In 2002-03 the Commonwealth’s share of public hospital funding was 44.2%.  By 2012-13 it had declined by 7.2 percentage points to 37.0%.  As long as the Commonwealth funds less than 50% of growth in costs its share will continue to decline.

It is now received economic wisdom that the Government’s “budget emergency” is an ideological confection (see  http://www.theguardian.com/world/2014/sep/18/budget-emergency-denied-by-63-leading-australian-economists and http://www.smh.com.au/business/no-budget-emergency-say-economists-20140711-zt4kz.html).

Given this latest AIHW report, the “health sustainability crisis” must be put in the same category.

• At The Conversation, Professor Stephen Duckett, Director of the Grattan Institute’s Health Program, says the report “gives lie” to claims the health system is unsustainable.