The stigma that surrounds suicide can discourage people who are feeling suicidal from seeking help, according to new research.

A consultation report, which details the views and needs of people who have attempted suicide and their family and friends, was released today, together with new resources to help support those affected by suicide attempts.

In the article below, Jaelea Skehan, Acting Director of the Hunter Institute of Mental Health, suggests that the new publications show the value of including people with lived experience of suicide as research participants.

The resources will be available at the National Suicide Prevention Conference in Perth this week. Ahead of the official conference opening on Wednesday, a pre-conference workshop on Tuesday will focus on community-driven suicide prevention.

The lived experience of suicide-attempts: An add-on or critical component of suicide prevention activity?

It is estimated that approximately 65,000 Australians make a suicide attempt each year.  These individuals can experience a range of physical, psychological, emotional and social challenges following the event and are at much higher risk of a further attempt or death by suicide.

After an attempt, people commonly describe feelings of shame, isolation and hopelessness; and both individuals who have attempted and close family and friends describe feeling overwhelmed and ill-equipped to navigate through the initial crisis.

As a consequence of their experiences, people who have attempted suicide and their family and friends have unique expertise and knowledge about the types of services and resources that are most responsive to their needs.

But how often do we involve people with lived experience of suicidal behaviour in our suicide prevention activities? And, what are the opportunities and challenges that this involvement brings? 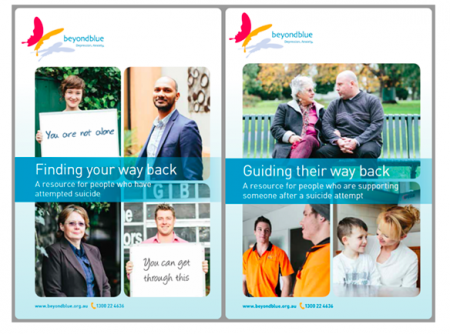 This week a new suite of resources to support people following a suicide attempt were released by beyondblue Chairman Jeff Kennett.  The three booklets were written as a partnership between the Hunter Institute of Mental Health, beyondblue and people with lived experience of suicide attempts.

To coincide with the launch of the resources, the Hunter Institute of Mental Health has released a consultation report, which details the views and needs of people who have attempted suicide and their family and friends.

Outlined below are some reflections from that consultation and some broader considerations for the involvement of people with lived experience in research and practice.

A total of 37 people with lived experience of a suicide attempt, including 22 individuals who had attempted suicide, nine family members or friends and six people who fell into both categories, participated in a small qualitative research study to inform the development of the way back information resources.

Driven by a strong desire to tell their story, participants shared intensely personal aspects of their lives that included descriptions of past feelings of absolute hopelessness, despair and experiences of their world being “turned upside down”.

In addition to themes that emerged in response to specific questions, two major themes emerged across all of the questions – that suicide and suicide attempts are highly stigmatised in the community, and that people who are suicidal can be reluctant to disclose their feelings and seek help.

Participants spoke about the stigma as stemming from societal institutions such as religion (suicide as a sin), the law (suicide as a crime), medicine (suicide as a mental illness) as well as general cultural beliefs that value ‘toughness’ when people are facing adversity. As one participant stated:

“The biggest and the oldest problem is the stigma attached to it, which then becomes associated with the fear of embarrassment, humiliation, guilt and feelings of failure.”

Participants identified that people who are suicidal can be reluctant to disclose their feelings and seek help because of expectations that others will respond with stigmatised and poorly informed views, or will be unable to assist.  For example:

“I was desperate to speak to someone, anyone, about how I was feeling.  And I felt I couldn’t and this made it really hard.”

When asked what type of information would be helpful for people after a suicide attempt, four key themes emerged.

While research is often conducted and reported, there is often a time-lag before this research can be translated and applied to practice.  However, when research is integrated into project design, it allows for immediate translation.

In this instance, the views of those with lived experience of suicide attempts was used alongside the research evidence and the views of academics and service providers to inform the content, format and style of the information resources. With permission, the words of people with lived experience were used throughout the final resources to provide a voice of hope and understanding that reinforced the practical evidence-informed information.

The strong level of interest from participants in taking part in the consultation and the success of consultation showed that it was both important and possible to systematically investigate the needs and interests of this target group in a safe and sensitive way.

However, there were challenges that arose and that need to be considered. For example, research ethics often requires eligibility criteria, screening and other methods to ensure that any risk of participating is minimised and managed. But, what about the unintended risk that may come from excluding those with a desire to participate?

In essence, how can we encourage more research-informed consultations with people who have lived experience that includes some flexibility to include those who continue to live with, but manage, risk on a daily basis?

Perhaps it is the views of these people that are still missing from the literature.

About the way back resources

Three new booklets released today have been developed to support people affected by suicide attempts.  They were developed as a partnership between beyondblue and the Hunter Institute of Mental Health and were proudly funded with donations from the Movember Foundation.

The new resources were developed following a review of evidence and policies and consultations conducted with clinicians, academics and those with lived experience of a suicide attempt.  The Aboriginal and Torres Strait Islander resource was written in partnership with a resource development and review group that included national and state community controlled organisations.

The resources will be available at the National Suicide Prevention Conference in Perth this week and can be downloaded now from the beyondblue website.

For more information about the development of the way back resources is available from the Hunter Institute of Mental Health’s website.

Matthew Giles will cover the National Suicide Prevention Conference for the Croakey Conference Reporting Service.  Follow the discussions on Twitter at #NSPC14.