In September, the Queensland Government suggested that the Federal Government and the emerging Medicare Locals network should step in to fill the gaps caused by its health spending cuts.

SA appears to be heading in a similar direction, according to a recent report recommending sweeping changes and cuts to community and primary health care services.

The Review of Non-Hospital Based Services evaluated 235 services across metropolitan Local Health Networks. In its sights are practice nurse programs, services for youth, women and the elderly, health promotion programs, and an Aboriginal health workforce initiative.

The review says there is little reliable evidence to show that the primary health care sector is meeting objectives, and that “unlike the acute sector, there is no agreed standard approach to evaluating value for money effectiveness of primary healthcare services”.

The review – which is open to public comment until 4 February – warns that without better evidence about the impact of their work, “primary health care clinicians and administrators will continue to struggle to mount a case for retaining current levels of investment, to say nothing of attracting new investment, in primary health care. This is the reality of the fierce competition for resources that is part and parcel of modern government.”

However, a leading public health advocate Professor Fran Baum writes below that the review shows a poor grasp of the determinants of health and the international body of research evidence showing the value of community services and primary health care.

Professor Baum, Director, Southgate Institute for Health, Society & Equity at Flinders University, warns that the review’s recommendations would hit the community’s most disadvantaged members, at the same time as salaries and payments to medical specialists have been increasing.

All the international evidence suggestions we should be increasing investment in health promotion and primary health care, yet a report released in South Australia has chosen to ignore this rich evidence and recommends cuts to these areas.

Like other State governments, the South Australian Labor Government has suffered from falling state revenues (less house sales, less GST revenue). This has forced it to look for savings and inevitably health, by far the biggest spending department, has been in the firing line.

Health spending continues on an upwards trajectory so that in 2012-13, it was 129% higher than in 2001-02. The latest shot from the austerity trenches has been the publication of the McCann review available here.

This Review of Non-Hospital Based Services was led by Warren McCann from the Office of Public Employment and Review, and purportedly examined “the performance and outcomes of 235 individual non-hospital based services across metropolitan Local Health Networks (LHNs)”.

Its stated aim was “to identify opportunities to improve services or deliver them in a more efficient manner, as well as to achieve savings to contribute to SA Health’s budget savings strategy”.

The real game is revealed by the following: “Under the new national health care reform, many of the services that were subject to the Review will come under the responsibility of Medicare Locals. In light of this, the Review ensures our non-hospital based services will complement Medicare Locals, rather than duplicate or compete against them.”

Yes, you’ve got it – it is a State/Commonwealth cost shifting exercise once again!

SA Health’s “non-hospital based services” include a range of primary and community health programs in Adelaide.

The report recommends that: all the 40 FTE health promotion positions are cut, sweeping cuts are made to the already tiny women’s health and youth health services, Aboriginal workforce initiative and some support services to GPs.

These savings are a tiny drop in the tsunami of health spending that threatens to consume the entirety of State government budgets in about twenty years if nothing is done to stop it.

In many ways the McCann report provides a microcosm of why governments are failing to control health spending. Here I’ll expand on two of the reasons for this claim:

1. Poor understanding of the determinants of health

The report simply does not understand what makes populations healthy. This question is complex and requires a good understanding of the social determinants of health (the things in our everyday life – like social contacts, work, leisure, the quality of our housing – and the broader macro-political and economic environments in which we all live).

Primary health care and community health services should ideally interact with agencies and groups in a local community that impact on the social determinants of health.

In the past South Australia had a great network of community health services that did this very well. Typical activities were community gardens (also good for social interaction as well as learning about healthy food), advocacy work to ensure that disadvantaged clients gain access to health promoting services such as housing, legal advice and women’s shelters; working with local shopping malls to have them welcome walking groups, encouraging child care centres to provide healthy food, organise networks of community foodies to promote healthy weight through good healthy food. The list could go on and on.

Over the past five years this work has been progressively cut back and reshaped into a more medical model of community health, which isn’t able to do this important development work that builds health promoting social capital.

Just one example of how McCann doesn’t get the value of such work – the report notes that the women’s health services do not contribute to chronic disease management, hospital avoidance and population health because they have “a stronger focus on social support, community engagement”.

Obviously McCann is not aware of the very large evidence base which shows that social support is crucial in recovery from illness (so reducing need for readmission to hospital) and for keeping people healthy.

2. Austerity measures are not fairly shared

All international evidence that is available confirms that the health systems which are most efficient and cost-effective are based on strong primary health care services.

If we want to stem the costs of health care we have to increase investment in community services and reduce the amount spent on hospitals.

In the past five years the salaries and payments to medical specialists have increased very significantly.

Far more could be achieved if McCann had been asked to systematically document these increases and shown the community that their much valued local health services were being lost because medical specialists have received considerable pay increases.

This is the community conversation that we need to have. Otherwise it is austerity for some and not for others. Ironically the cuts McCann recommends will affect the most disadvantaged of South Australia’s community because of salary increases for our most advantaged!

Finally, it was an irony that the McCann report was released when the Southgate Institute was being visited by Professor Ron Labonte (University of Ottawa).

He reminded us that the current austerity sweeping the world results from political decisions to bail out banks and from the increasing concentration of wealth. He also reminded us that we collect significantly less taxation as a percentage of GDP than we did 20 years ago.

Imagine a world in which McCann put his considerable economic skills to work to determine how much extra tax we could collect from the super-rich who use tax havens, and from corporations who have an army of taxation experts to help them reduce their taxation.

Then we could look forward to a McCann report that calls for increased investment in health promotion and community health on the grounds that prevention is cheaper than cure!

In the meantime if you’d like to object to the McCann’s review recommendations, consultations are open until 4th February. 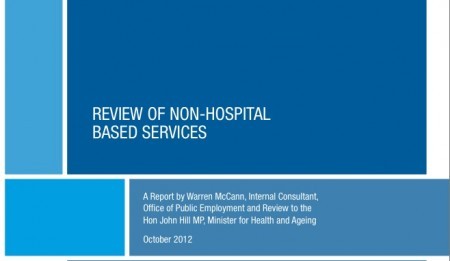