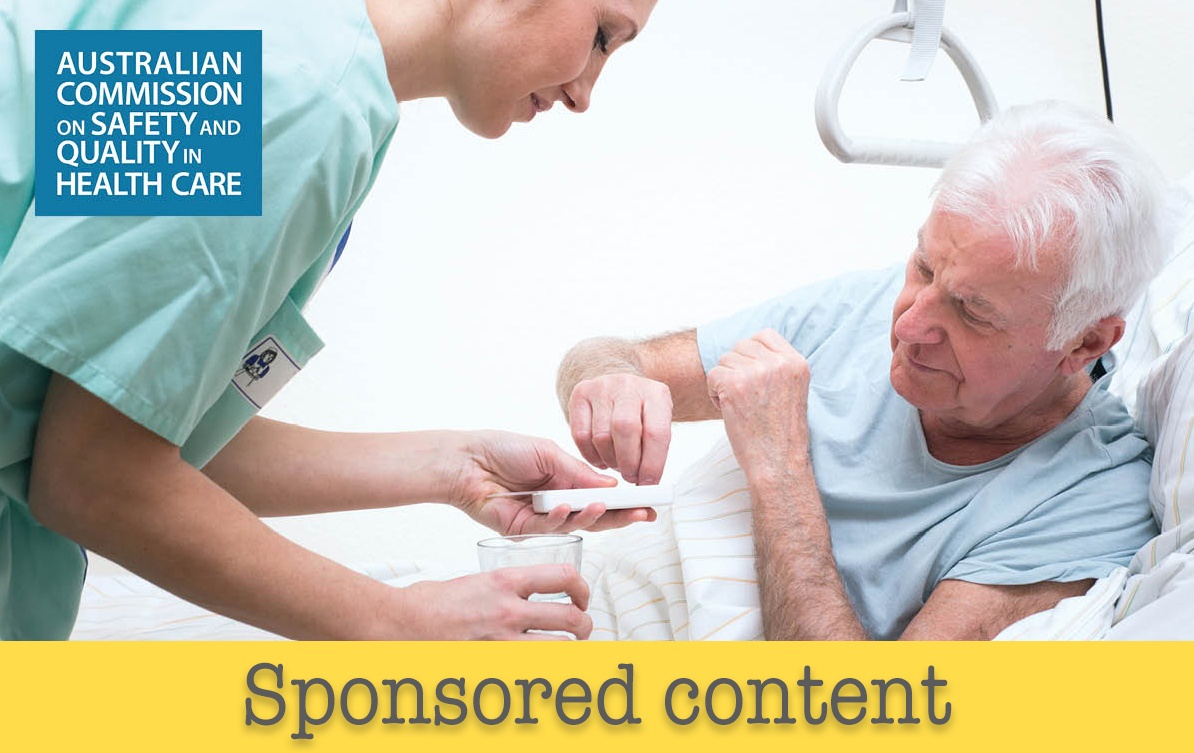 New standard tackles the toll from inappropriate prescribing of opioids

The Australian Commission on Safety and Quality in Health Care has released a new national clinical care standard that aims to reduce deaths and other harms associated with inappropriate prescribing of opioids in the emergency department and after surgery.

The article below is published by Croakey Professional Services as sponsored content. It is funded by the Australian Commission on Safety and Quality in Health Care.

The scale of opioid analgesic prescribing in Australia has been garnering attention among the medical fraternity in recent years – with compelling reason, given the potential for long-term harms.

Within any one year, thousands of Australians who have surgery could go on to become persistent users of opioids, with the analgesics responsible for more overdose deaths than heroin and untold further adverse effects among hospital inpatients. Each day 75 hospitalisations involve side effects from pharmaceutical opioids.

Amid concerns about an upsurge in opioid marketing and prescribing in recent years, the Australian Commission on Safety and Quality in Health Care (the Commission) wants health services and health professionals to prioritise action in reducing these harms.

Opioid analgesic stewardship is the subject of the Commission’s latest clinical care standard, a series of best-practice guidance on a range of key clinical questions. The opioid standard, and accompanying framework, was launched yesterday (April 27).

It covers a host of high-yield measures targeting surgical and emergency departments which, implemented Australia-wide, could “turn off the tap of inappropriate prescribing that is causing long-term harm”, according to the Commission’s Chief Medical Officer, Conjoint Professor Anne Duggan.

“We’ve got a great opportunity to ensure that people are appropriately assessed, given the right dose for the right period of time in the right way – and importantly, go home with clear information for their GP about what medicines to use and for how long,” Duggan said.

Australia’s painkiller problem is nowhere near the scale of the so-called opioid epidemic in the United States – which has captured public attention in recent years with the hit series Dopesick and a string of high-profile pharmaceutical company prosecutions, as chronicled in the bestseller Empire of Pain.

But it is nonetheless a significant public health concern. According to a comprehensive 2018 report from the Australian Institute of Health and Welfare (AIHW) on opioid use and associated harms, overdose hospitalisations and deaths increased over the preceding decade, with some 3.1 million people dispensed prescriptions in 2016-17.

Pharmaceutical opioids were more likely than heroin to be involved in hospitalisations and deaths, with one in ten Australians aged 14 and over reporting use of these drugs for illicit or non-medical purposes, according to the AIHW report.

Around 2.5 million patients undergo surgery annually in Australia’s public and private hospitals. At least four percent of people are still using opioids three months later, with some estimates as high as 29 percent.

The Commission has been monitoring opioid analgesic use through its Atlases of Healthcare Variation for several years. The Third Atlas of Healthcare Variation identified a five-fold disparity between the locations with the highest and lowest rates of opioid dispensing, and found a five percent increase nationally in dispensing rates per 100,000 people between 2013-14 and 2016-17.

There is marked variation in patterns of use, concentrated in major regional centres inland and across the nation’s east coast, according to Sydney anaesthetist and pain management specialist at St Vincent’s Hospitals, Dr Jenny Stevens.

Increasing rates of opioid use has spurred the Therapeutic Goods Administration (TGA) to embark on a series of opioid-related regulatory reforms in 2020 targeting problem use. They engaged the Commission to draft a clinical care standard as part of this process.

Stevens was first alerted to an escalating opioid problem in her own hospital about eight years ago by the pharmacy, whose staff were concerned about the discharge of patients with opioid prescriptions “multiples of what they had been five or eight years before that”.

“We had suddenly started sending so much oxycodone out of the hospital,” she said.

She attributed this to a “perfect storm” of pharmaceutical marketing targeting specialists and GPs, ‘just in case’ prescribing practices and a move towards more aggressive treatment of pain. Opioids were marketed as the gold standard, particularly the slow-release preparations, without recognition of the potential harms, including unintended long-term use.

“We had this whole combination where the junior doctors were being told ‘yes you need to be more aggressive, prescribe more’, GPs and specialists were being fed the line that we could do that safely with these new drugs,” said Stevens.

“It was just a little bit of a perfect storm unfortunately, and it just changed the scene very quickly.”

Orthopaedic surgeon at Dubbo Base Hospital and North Shore Private Hospital Sydney, Dr Andrew Sefton, was closely involved in the development of the Standard and associated framework. He has seen first-hand the years-long battle some patients face weaning off post-op opioids, which he describes as a “hidden problem”.

“Where we all come from in medicine, and in health in general, is a desire to help people, and one of the things we can most easily see and want to help with is pain,” Sefton said.

“It’s quick and easy to write a script, but the ramifications for someone who is taking opiates for too long and becomes addicted, those issues are huge.”

In the hospital setting, these harms can range from constipation to over-sedation, which can set in train a raft of serious complications including opioid-related respiratory depression, pneumonia and blood clots. In addition to the impact on patients, this can become “a very expensive exercise both in cost of bed and length of stay”, the Commission’s Duggan added.

“You can certainly see that there would be economic arguments as well as patient safety arguments [for reducing usage and associated harms],” she said. “There are also workload arguments; the frontline is terribly stretched and patching up errors is a very labour-intensive exercise.”

The Standard emphasises nine key areas to improve opioid prescribing, with 15 indicators for healthcare professionals and services to assess their progress against. Its foundational tenet is the use of immediate-release formulations at the lowest appropriate dose for a limited duration in acute pain for opioid-naïve patients.

It is modelled on the Commission’s well-established antimicrobial stewardship framework, which was road-tested with stakeholders and found to meet expectations when applied in the opioids space.

Both Sefton and Stevens highlighted transfer of care as one of the Standard’s pivotal elements.

“Discharge planning, particularly out of private hospitals, needs to improve,” Stevens said. “I think we have relied on patients almost self-managing their opioids.”

The Standard makes explicit that a plan for weaning and ceasing opioids should be detailed at their initiation, using a standardised protocol that sets out dose and expected duration and is communicated directly to the patient’s GP.

“It’s a very simple thing and something that, on the whole, I don’t think we’ve been doing,” Stevens said. “I think that has the potential to make things a lot safer, while also informing patients and making them part of the process.”

Consistent messaging from specialists and inpatient teams regarding the potential harms of and importance of diligence in opioid prescribing was also important in supporting GPs, who Stevens said “are doing the heavy lifting with this”.

“It’s about making sure that our messaging to the patient supports what the general practitioners are doing,” she said.

Assessing a patient’s pain, not only in terms of expected severity and subjective reports but also – crucially – impact on function, is prioritised in the Standard, as is individualising opioid prescribing decisions, ensuring the benefits outweigh the risks, and monitoring and managing adverse effects.

The trajectory of inappropriate opioid prescribing has already begun to shift, at least in part due to the TGA measures, but also in response to growing public awareness around harmful use, Stevens said.

Prescribing rates, and the use of slow-release preparations for acute and chronic pain were both trending down, and there had been a notable shift away from the more traditional opioids like oxycodone to other analgesics and opioid-sparing strategies, Stevens said.

“I think this Standard is really aimed at just generalising the gains we have made and making sure all Australians get access to those gains,” she added.

While the overall aim was to reduce problematic use, Stevens said it was critical that the pendulum did not swing too far in the opposite direction, recognising that opioids had an important role.

“Opioids are still so crucial in pain management for severe acute pain, we just want to make that prescribing safe,” Stevens said.

PrevPreviousAs we face systems collapse, heed these calls to “make your vote count”
NextThe potential benefits, as well as harms, from the COVID-19 disruption to cancer screening and other healthcare servicesNext