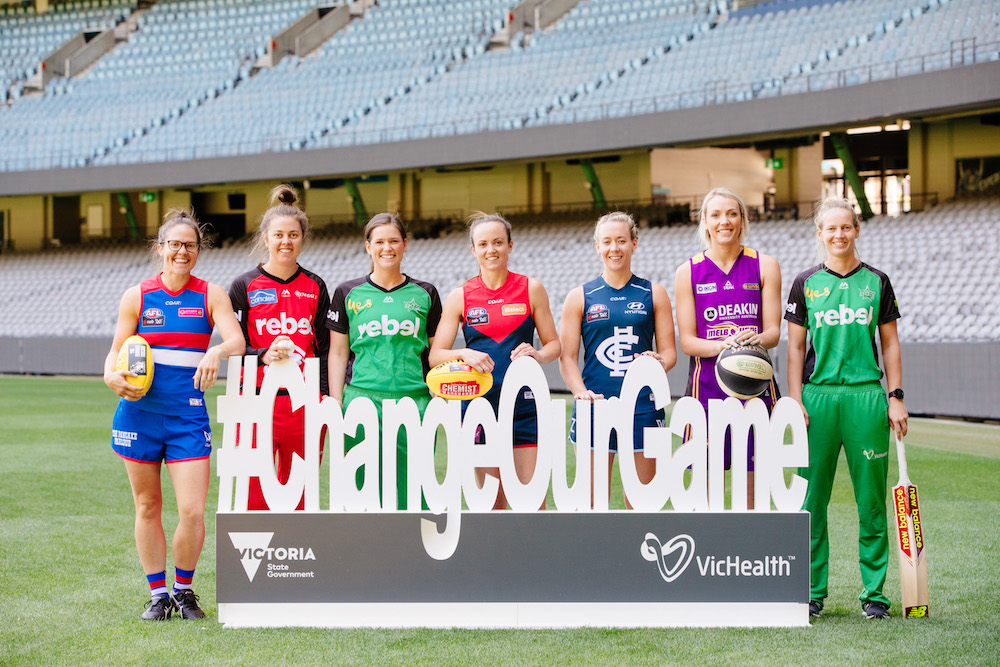 If you haven’t already done so, do yourself a favour and watch this delightful one minute ad for the new AFL Women’s (AFLW) competition that kicks off tonight at Melbourne’s Ikon Park.

That we finally have an AFL league of this calibre for women is, of course, a blow for gender equality, but it’s also the pointy end of an important health issue: girls are less likely than boys to participate in competitive sport, with a sharp dropoff in the adolescent years.

While the sex differences are more complex if you consider overall physical activity, there are specific benefits that come from sport, that women may be missing out on.

A recently launched initiative from VicHealth is harnessing the enthusiasm for AFLW to promote sport for women and girls in all its forms.

On the morning of the big game, VicHealth’s CEO, Jerril Rechter, previews the plans for the #ChangeOurGame campaign.

More women playing and enjoying the health benefits of sport? I think we’d all like to see that!

“Impractical, uninteresting, unaesthetic, and incorrect”. That was how the founder of the modern Olympic Games, Pierre de Coubertin, is said to have described women’s sport. More than 100 years later, most of us disagree with that depiction.

Women and the beautiful game

The first game of the AFL Women’s (AFLW) will be played tonight, and what a night it will be. Not only because it continues the greatest rivalry in the AFL code, with Carlton and Collingwood squaring off, but because it is, literally, a game changer for the profile of women’s football, which has a long, mostly unknown and often unusual, history.

In 2015, an exhibition was held at the WA State Library to celebrate 100 years of women playing AFL. The inaugural game came when the Foy & Gibson department store chain arranged a charity game in 1915 in Perth, and in their hats and full-length dresses, the factory workers played the shop girls.

In Adelaide a few years later (1918), a 3,000-strong crowd watched teams consisting “wholly of women from two leading warehouses” in aid of the Patriotic Fund. The Newspaper of the day said “football with frills will certainly be a novelty.”

In 1953, the Advocate referred to a game played in Queenstown, Tasmania, as “Amazonian Rules” but at least acknowledged that “the standard of play was high throughout … the marking, kicking and play-on style bringing prolonged applause from the crowd”.

Time always moves much faster than societal change, and it was 1981 before the Victorian Women’s Football League was formed in Melbourne. It took 11 years until the AFL Women’s National Championships were inaugurated in 1992, and it has taken 25 years since then for us to get to tonight’s game.

Given this history, it is perhaps not surprising that girls and women are still less involved with, and woefully under-represented in leadership roles, not just in the AFL, but in sport generally.

In an effort to address this, VicHealth’s new $7 million Changing the Game: Increasing Female Participation and Profile in Sport initiative will use new and creative ways to get more women and girls involved in, and playing sport and participating in physical activity.

Gender equality makes a major contribution to women and girls’ opportunity to achieve optimal good health and wellbeing.  We know there are a number of barriers that prevent women and girls from becoming more physically active, such as concern about fitness level or knowledge of rules, absence of others to play with, cost of memberships or equipment, and lack of ‘female-friendly’ facilities.

There are so many benefits to being active, from weight loss and disease prevention to improved mental health and opportunities for leadership. Our research shows that three quarters of Victorians (73%) agreed that female sport role models motivate women and girls to get physically active. If we want to raise strong, empowered, independent girls, then we need female role models.

VicHealth is working in this area through our new #ChangeOurGame campaign, which brings together teams from the AFLW, Women’s Big Bash League and Women’s National Basketball League to raise the profile of women’s sport.

We want to get tens of thousands of Victorian women and girls more active more regularly. So, join us, and tell everyone that talent, dedication and training is part of sport – and that elite sport is incredibly skilful, passionate and exciting to watch.  Whether it’s being played by men – or by women.

*Jerril Rechter is CEO of VicHealth