A global push to prioritise the physical health of people with mental illness was highlighted at a conference in Melbourne yesterday.

Marie McInerney is covering the Equally Well symposium in Melbourne for the Croakey Conference News Service, and today is live tweeting at @wepublichealth via the hashtag #EquallyWellAust.

Croakey’s Mitchell Ward is also livestreaming some of the discussions on on Periscope, via Twitter at @rocklilydesign.

A team of international health experts has nominated the physical health of people with serious mental health issues as one of the most important priorities for the global mental health agenda.

National Mental Health Commission Advisory Board Chair Lucy Brogden has hailed the priority given to physical health in the special report released last year by The Lancet Commission on global mental health and sustainable development.

Brogden was opening the first national symposium to be staged by the national Equally Well initiative, which was established under the leadership of the Commission in Australia in 2017 to improve the physical health toll experienced by people with mental illness.

She thanked New Zealand Equally Well leaders in the room for having launched the concept in 2014 and for working closely with Australia.

“It truly is ‘from little things big things grow’,” she said yesterday. “We are really seeing a movement take hold in this space.”

The Commission, which sought to capitalise on the Sustainable Development Goals to consider future directions for global mental health, proposed expanding the agenda from a focus on reducing the treatment gap to improving the mental health of whole populations and addressing gaps in prevention and quality of care.

The report calls for a re-framed agenda in global mental health, saying that despite substantial research advances showing what can be done to prevent and treat mental illness and to promote mental health, translation into real-world effects “has been painfully slow”.

The global burden of disease attributable to mental disorders has risen in all countries in the context of major demographic, environmental, and sociopolitical transitions.”

In response, The Lancet Commission’s first call for action is:

Mental health services should be scaled up as an essential component of universal health coverage and should be fully integrated into the global response to other health priorities, including non-communicable diseases, maternal and child health, and HIV/AIDS.

Equally, the physical health of people with severe mental disorders should be emphasised in such integrated care.”

Brogden later told Croakey it had been exciting to have subsequent discussions with representatives of many other countries on the work being done on Equally Well.

It was already underway in the UK, and there was real appetite to take up similar work in Europe and particularly in Africa, and to work out how to leverage good existing physical health models to work with people with mental health as well.

The Equally Well symposium has brought together, for the first time, more than 200 people to look at how to implement the Equally Well Consensus Statement, and how to create a strong platform across the health sector and community to help the physical health outcomes for people with persistent and severe mental health conditions.

Attending the event are clinicians, health service providers, researchers and people with lived experience from across Australia.

Brogden told Croakey the need for action was urgent:

The tragic headline is that today in Australia in 2019 someone with severe persistent illness has a life expectancy 24 years shorter than the rest of the population.

What makes it more tragic is these deaths are preventable if we get in early on both the physical and mental illness. If we tackle them early, we can prevent these early deaths and the onset of more significant illness.”

The “simple premise” for Equally Well is that a person living with severe mental illness should have the same right to physical health as anyone else.

Brogden said that when she says such things outside the health sector “they can’t believe that in 2019 we have to make statements like this – but that is the reality.”

The hope is that powerful reports like that of the Lancet Commission will help to put the issue of physical health outcomes high also on the agenda for the Productivity Commission inquiry into mental health, as well as the Royal Commission into Mental Health in Victoria.

“This is the number one global action for mental health and the governments at that forum all agreed to that,” she said.

Brogden is looking to those inquiries to reveal problems with “culture” in health and mental health in the same way that Royal Commissions have done so into banking and aged care. In response to a question from a delegate, she said the Mental Health Commission also planned to make a submission to the proposed Royal Commission into abuse of people with disability.

“We can have these beautiful documents, consensus statements that everyone puts their name to, but it’s for naught if in our minds and behaviours we are still doing old practice, old ways, and not embracing a new mindset,” she said.

She nominated silos in health care as one of the biggest barriers to change and something she knows too well through personal experience, as the wife of former New South Wales Opposition Leader John Brogden.

He experienced a mental health crisis in the full public glare and continues to work as an advocate for mental health and speak openly about the ongoing struggle he faces.

“I can tell you, nothing is more frustrating…(than when) I’m looking at my husband, working hard at recovery and now at risk of diabetes and heart disease, to be told (by a mental health specialist) that that (his physical health) is someone else’s problem,” she said.

She later came close to tears when she told delegates that she wasn’t able to stay for the full conference because Brogden was on Thursday turning 50.

“For someone who lives with mental illness to get to any birthday is an achievement,” she said. “But to get to 50 is a really big milestone which at times we didn’t think we would get to.”

In a wide-ranging address, Brogden said she tries to frame her work by the Justinian principle: “The wellbeing of the people is to be the highest law.”

“What a great test to apply: (to ask ourselves) ‘Am I enhancing, am I protecting, am I promoting the wellbeing of people or am I actually doing some harm?”

That question has already been a big one at the symposium and will be explored more today by people with lived experience who say a major contributor to their physical ill health is the use of isolation, restraint and over-medication in their treatments.

So too was concern that implementation of Equally Well strategies may be widely embraced by all those who sign up for it but not put into action.

Brogden finished her address with an appeal for delegates not to get tempted by the “low hanging fruit” but to look for system change.

The symposium was, she said, “an exciting opportunity to move this all forward.” 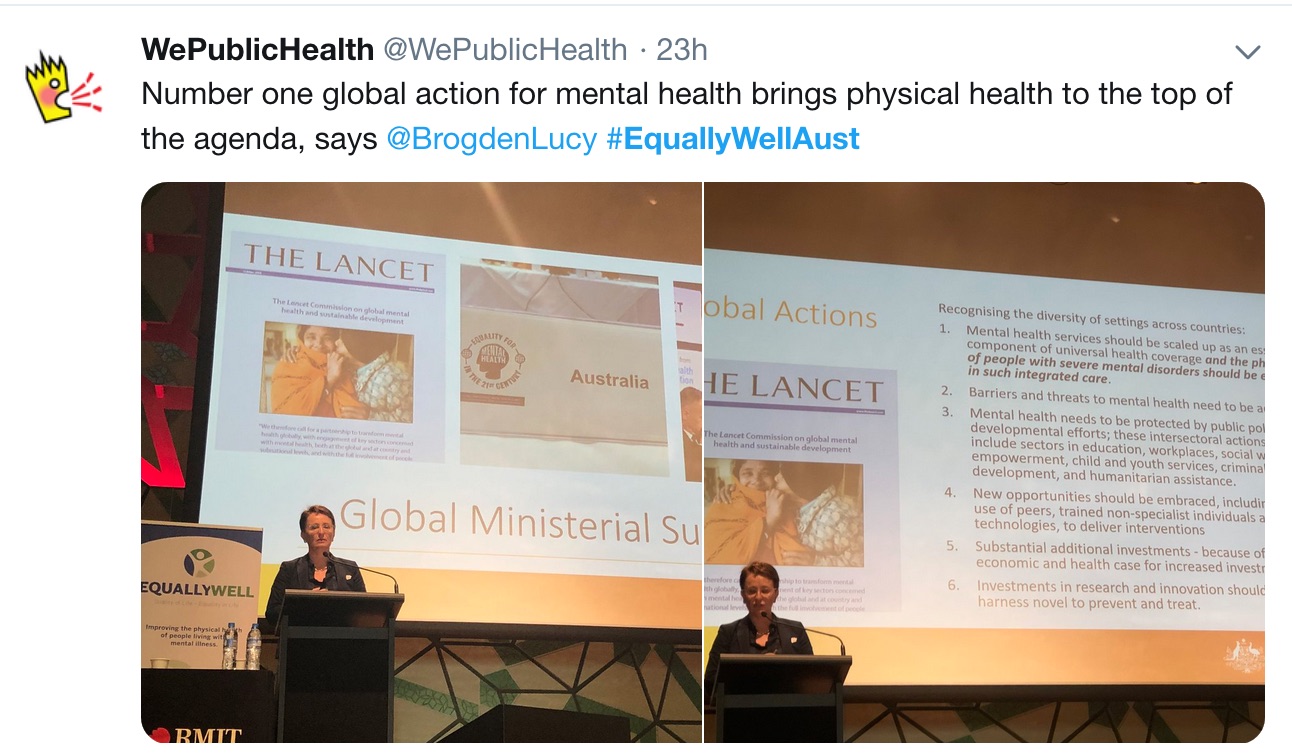 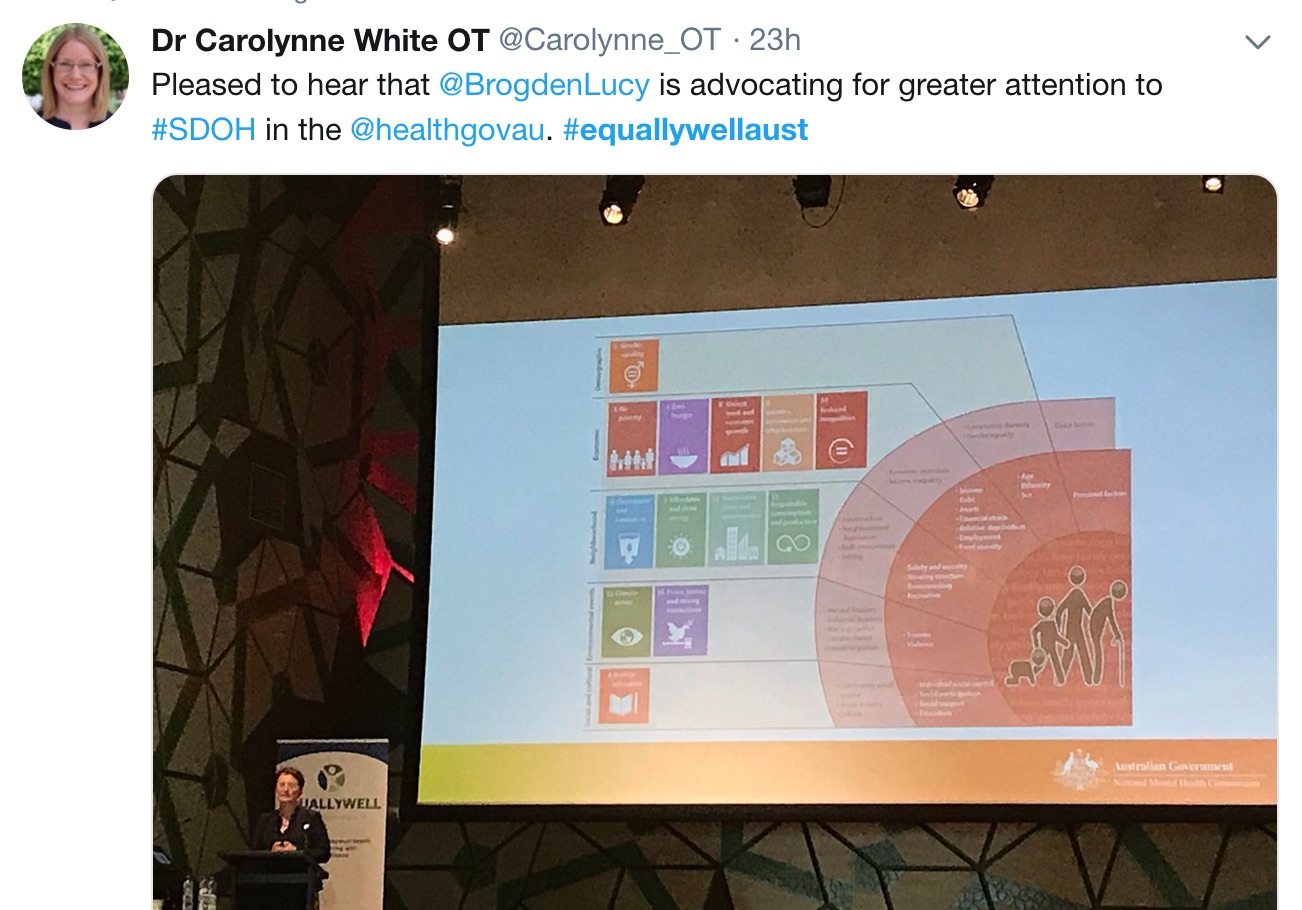 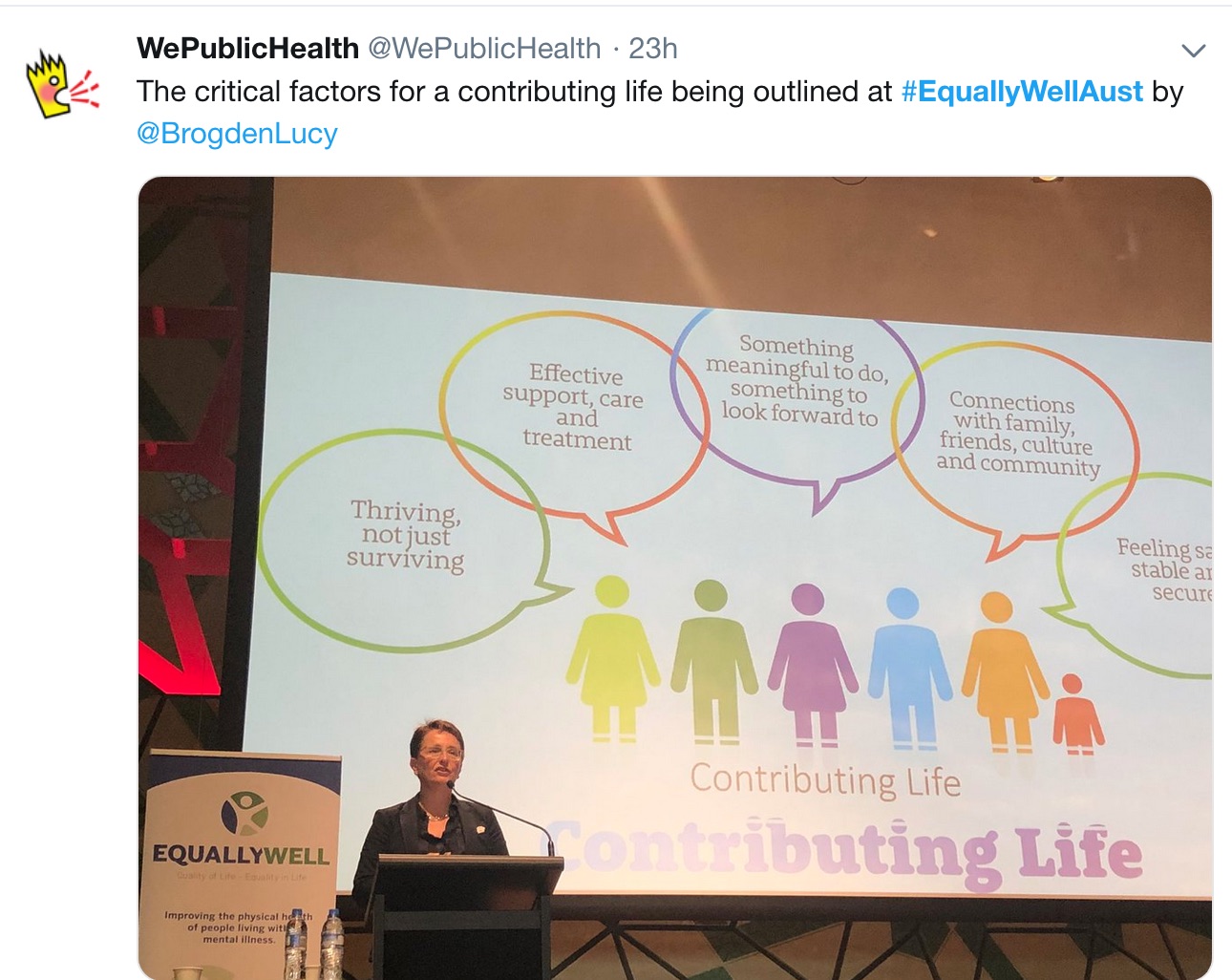 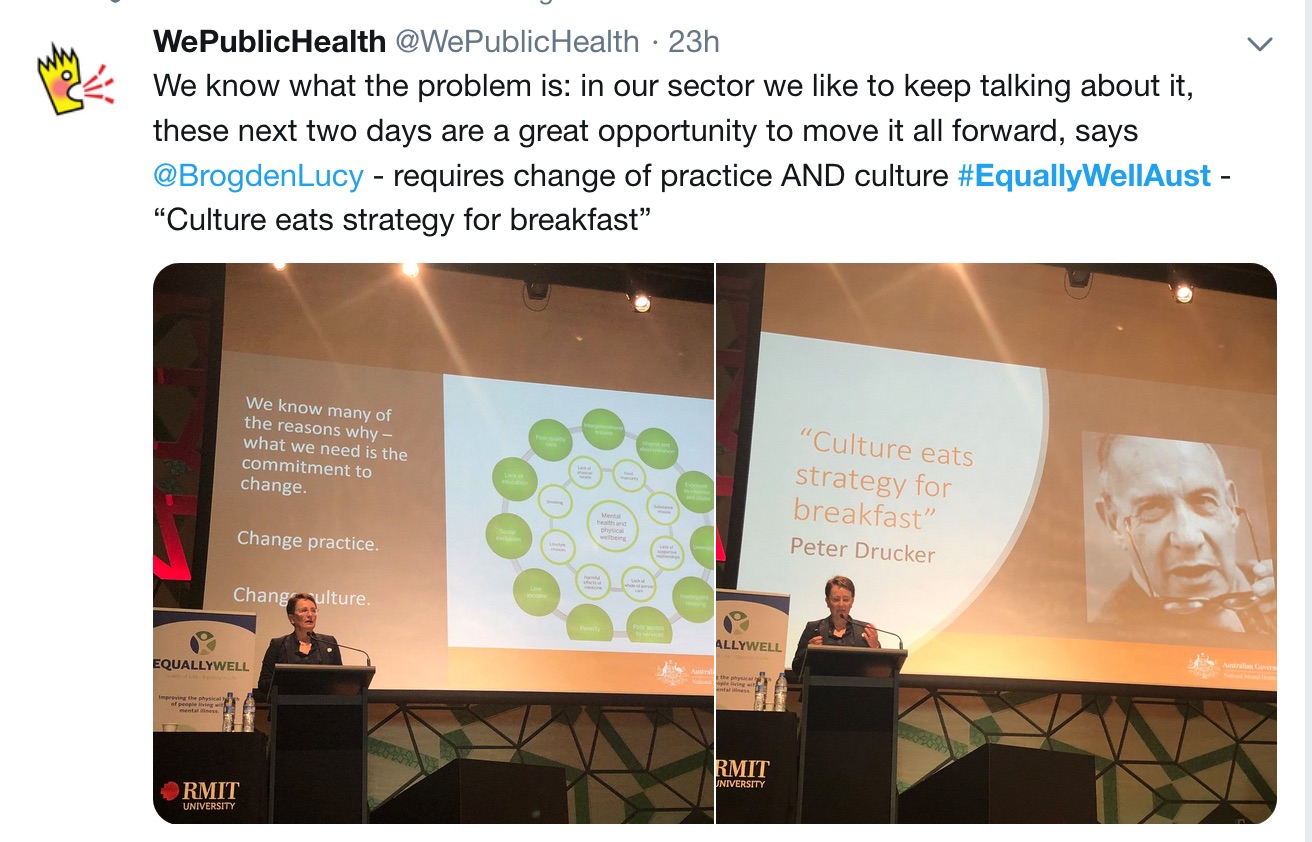 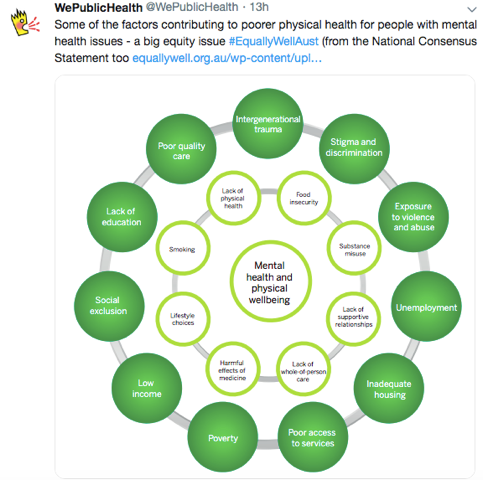 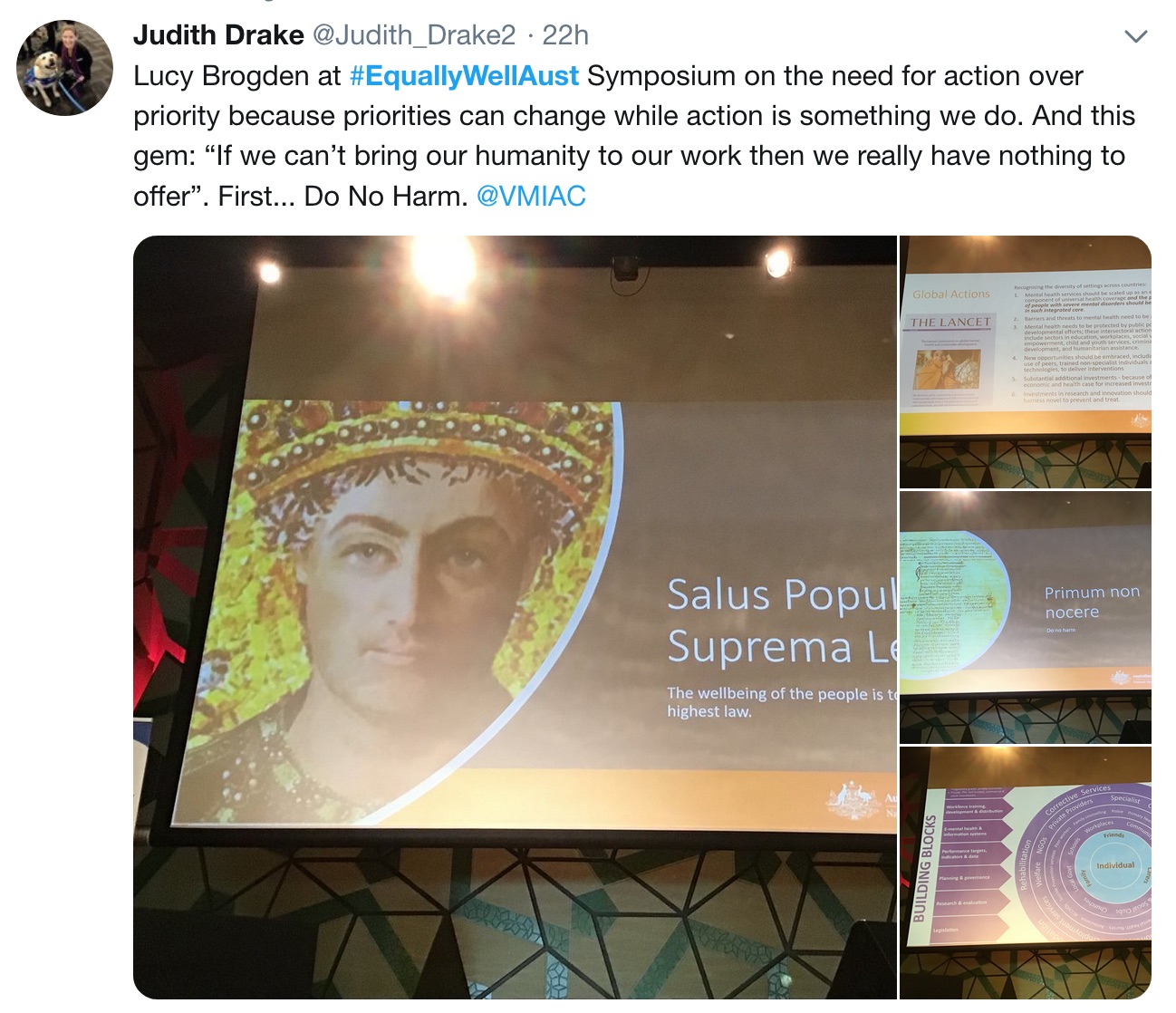 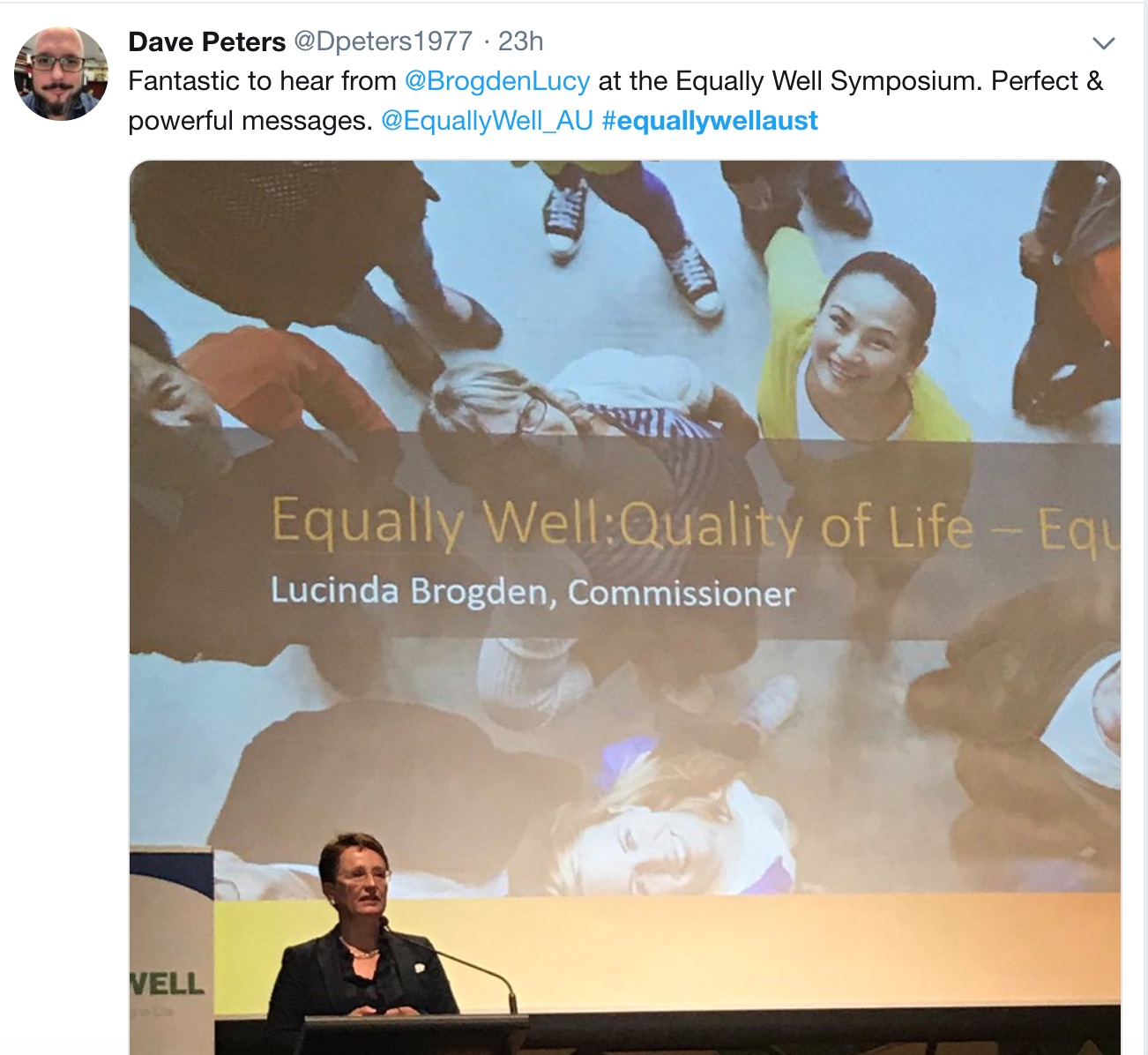 Watch an interview with Lucy Brogden 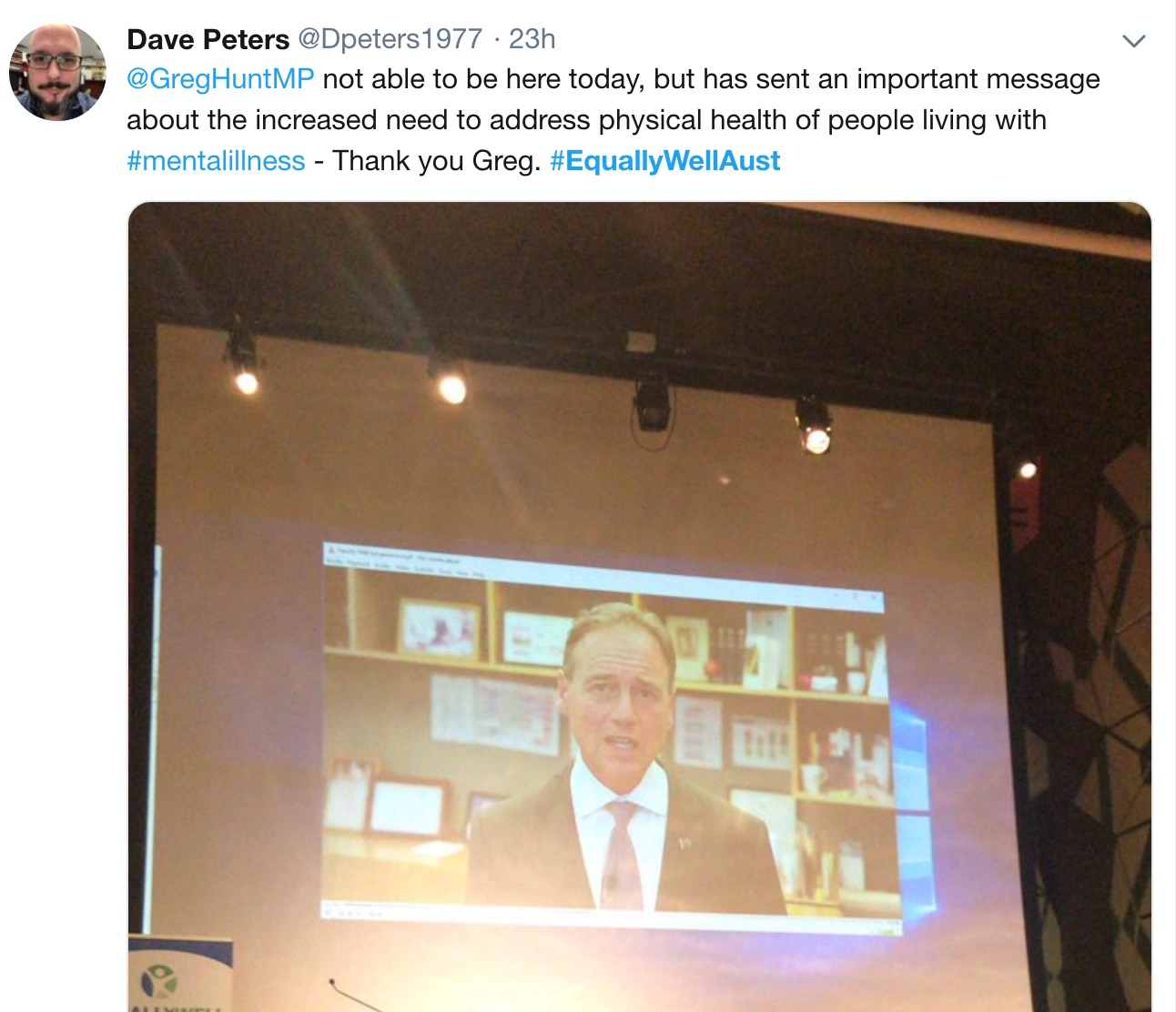 (Read more about his work in this Croakey article previewing the conference). 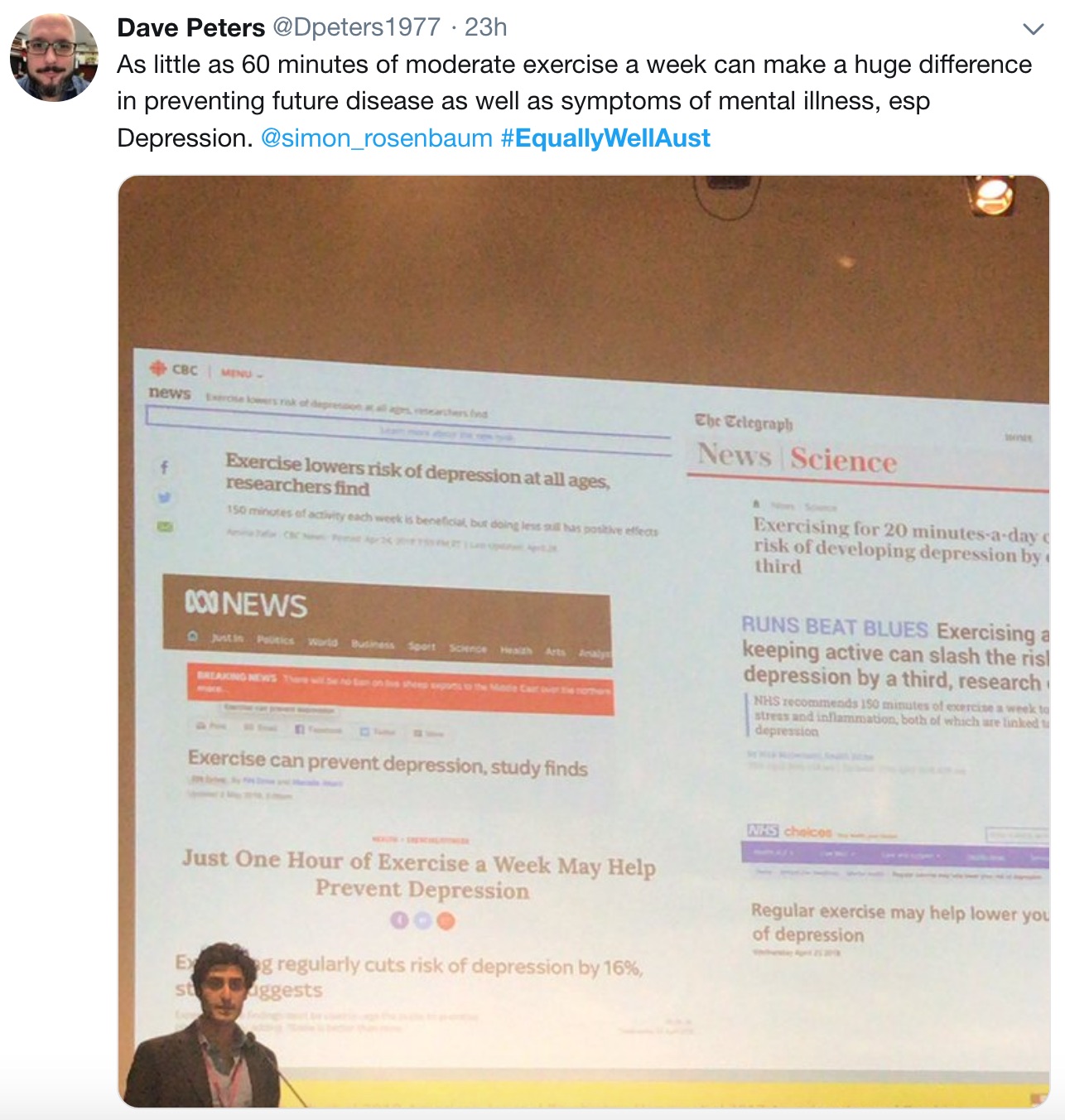 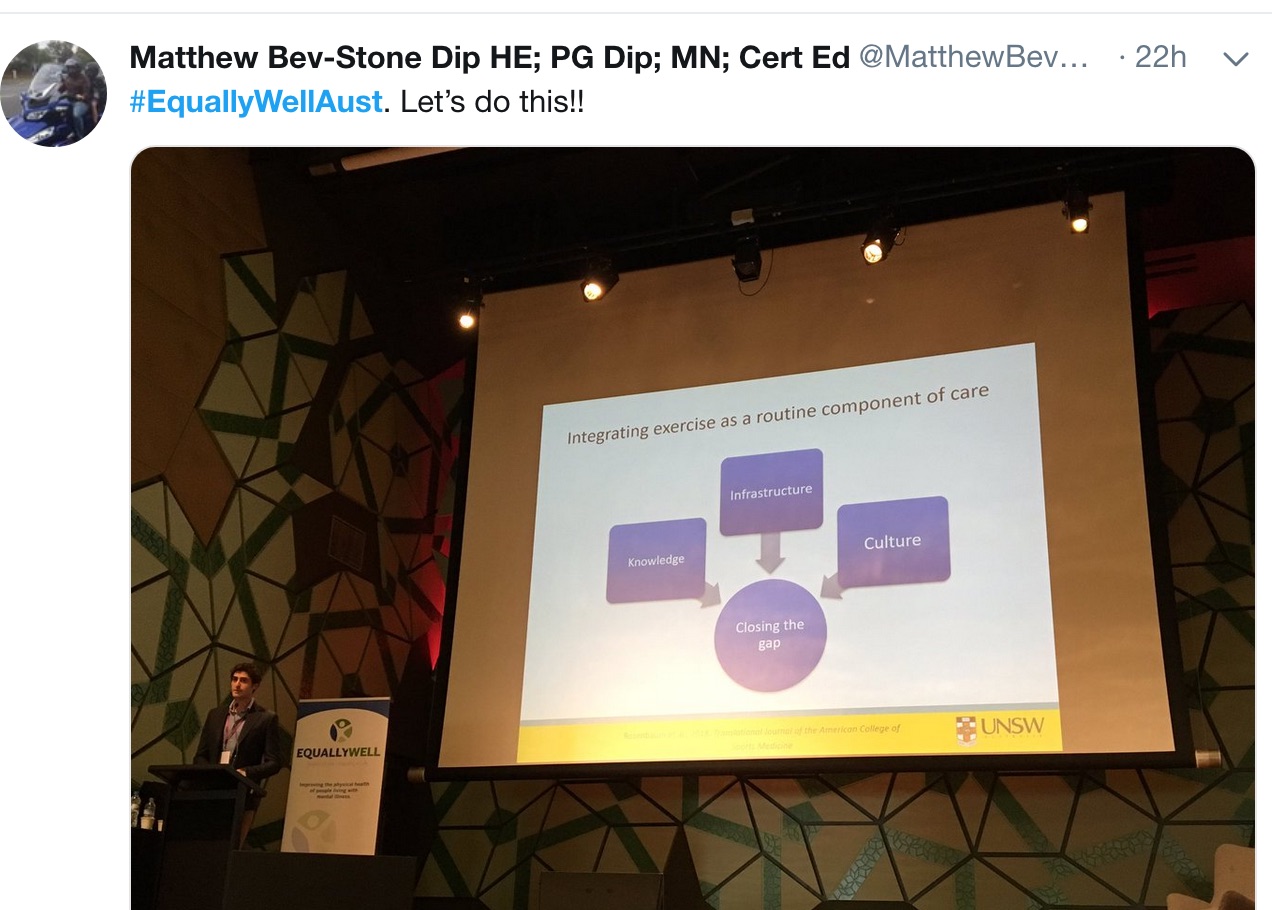 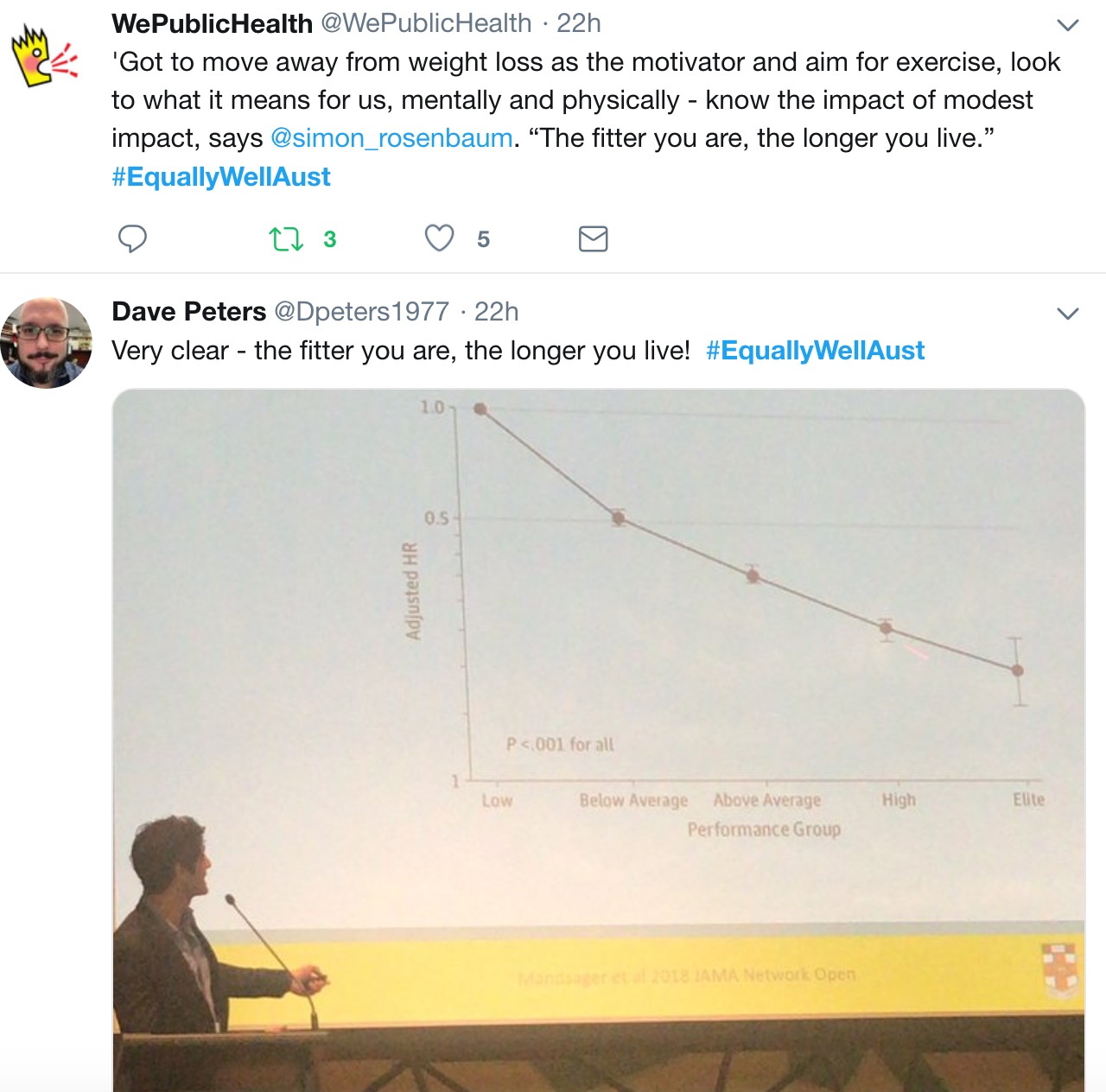 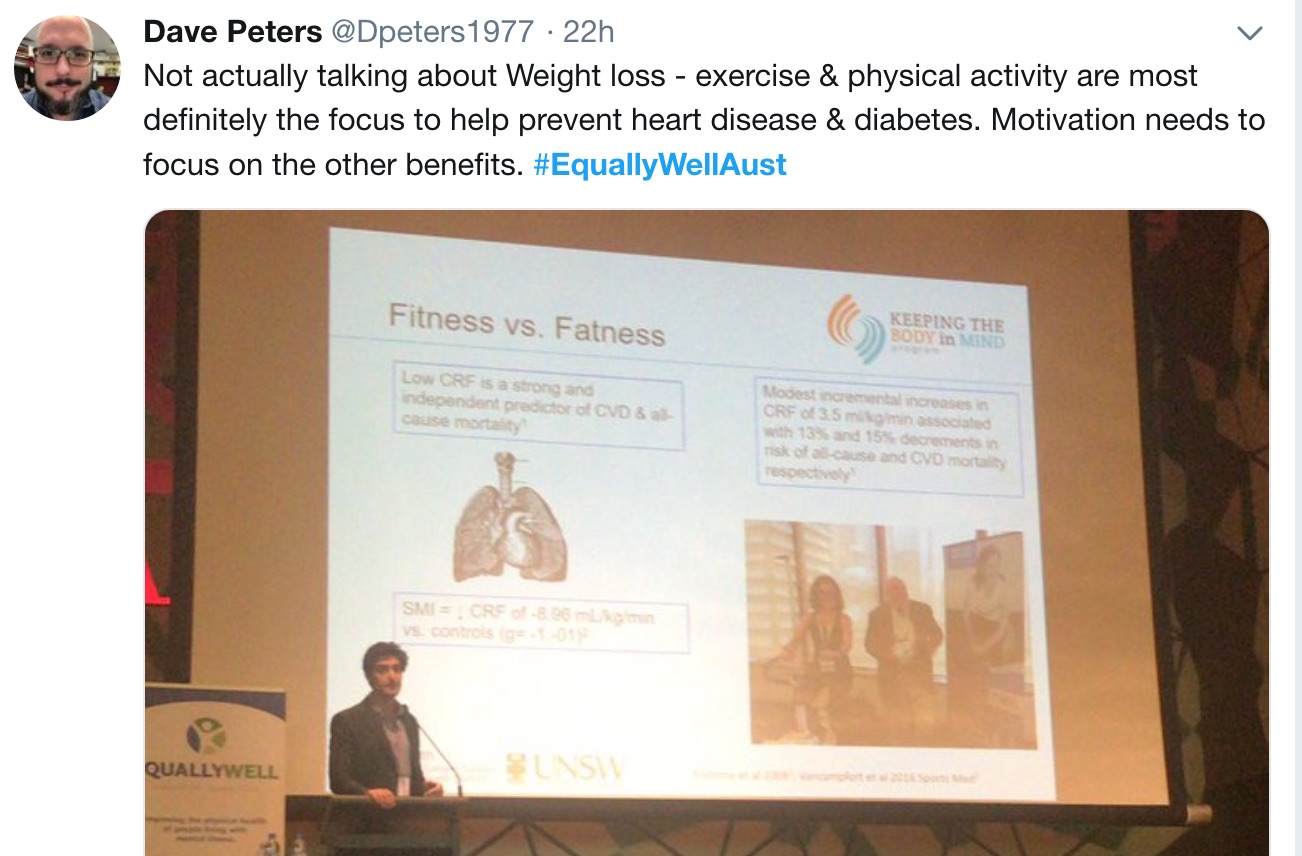 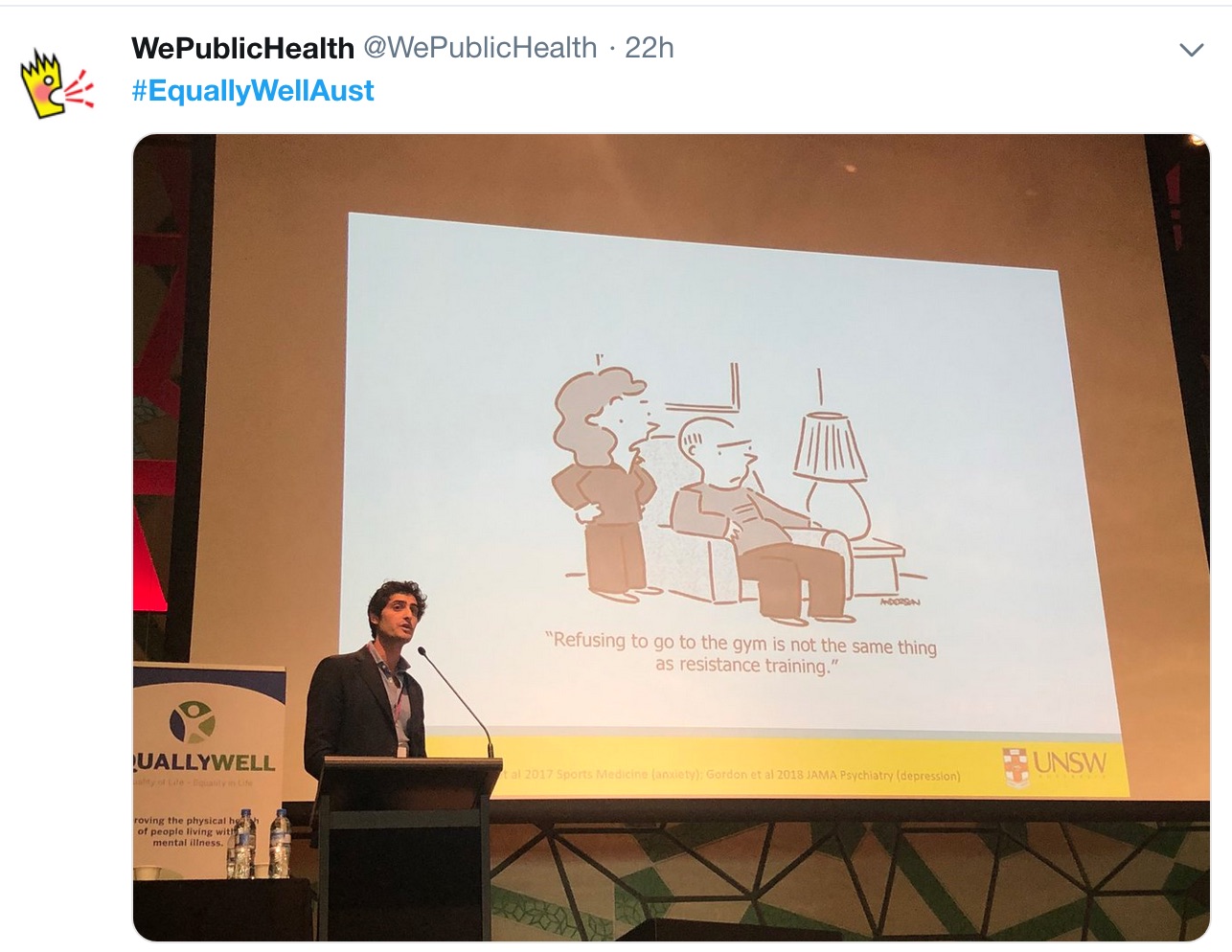 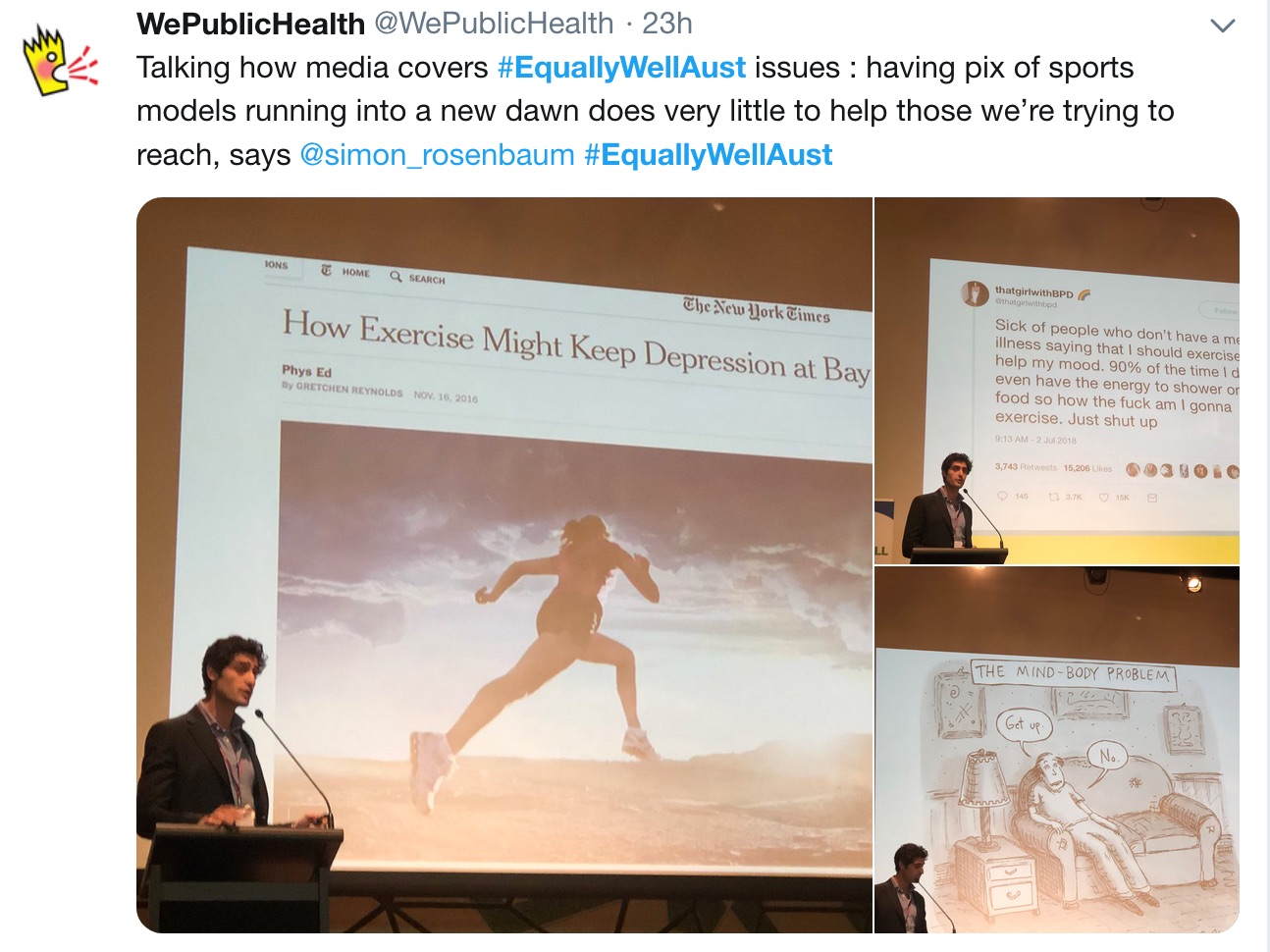 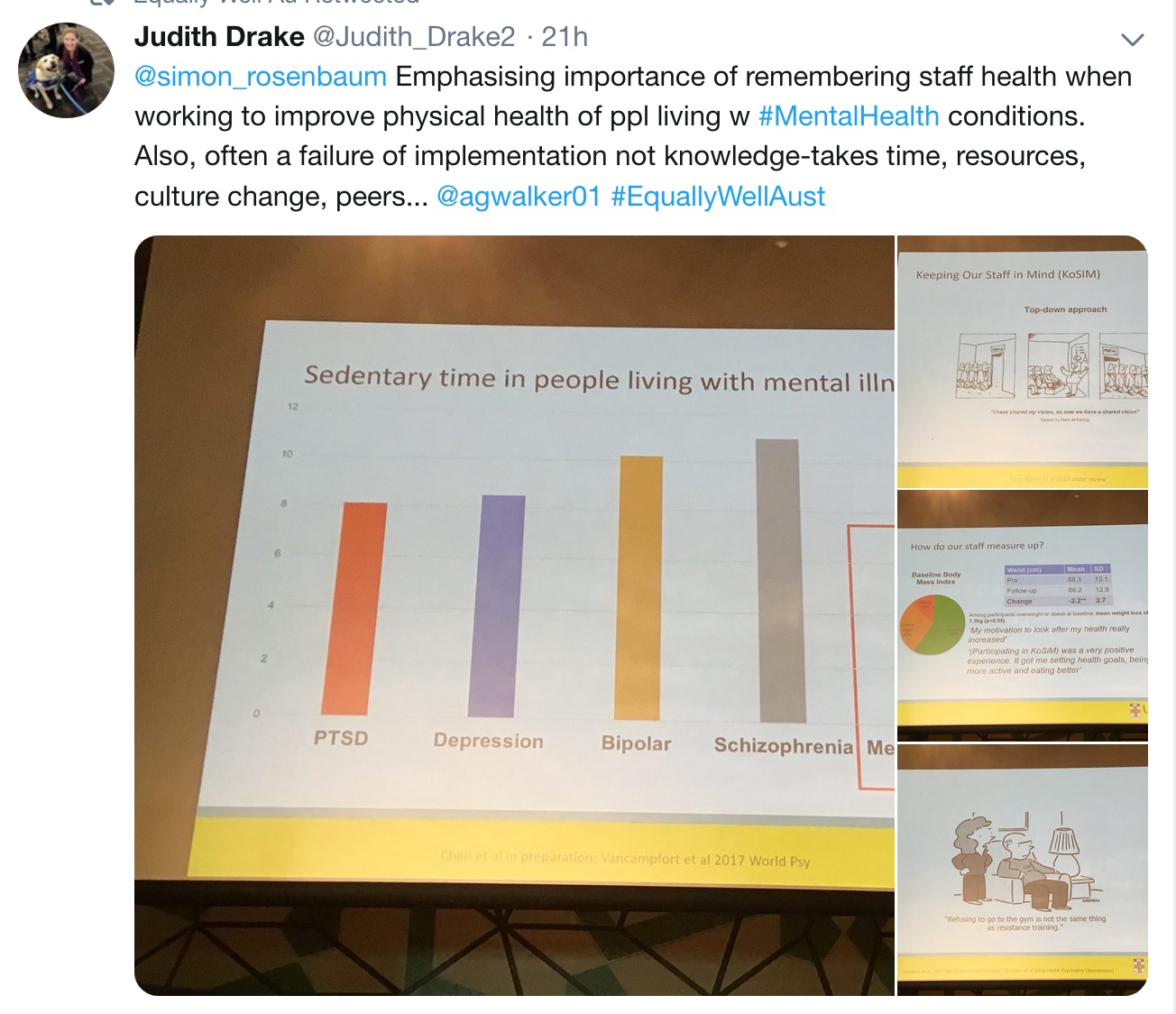 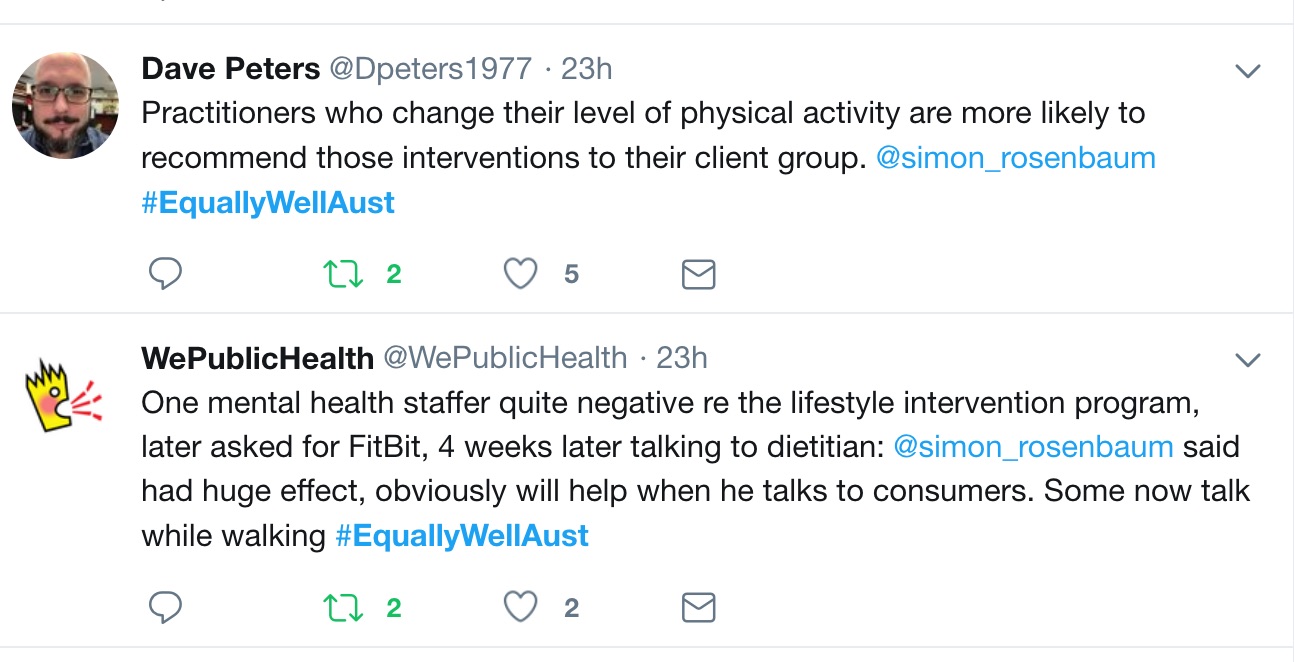 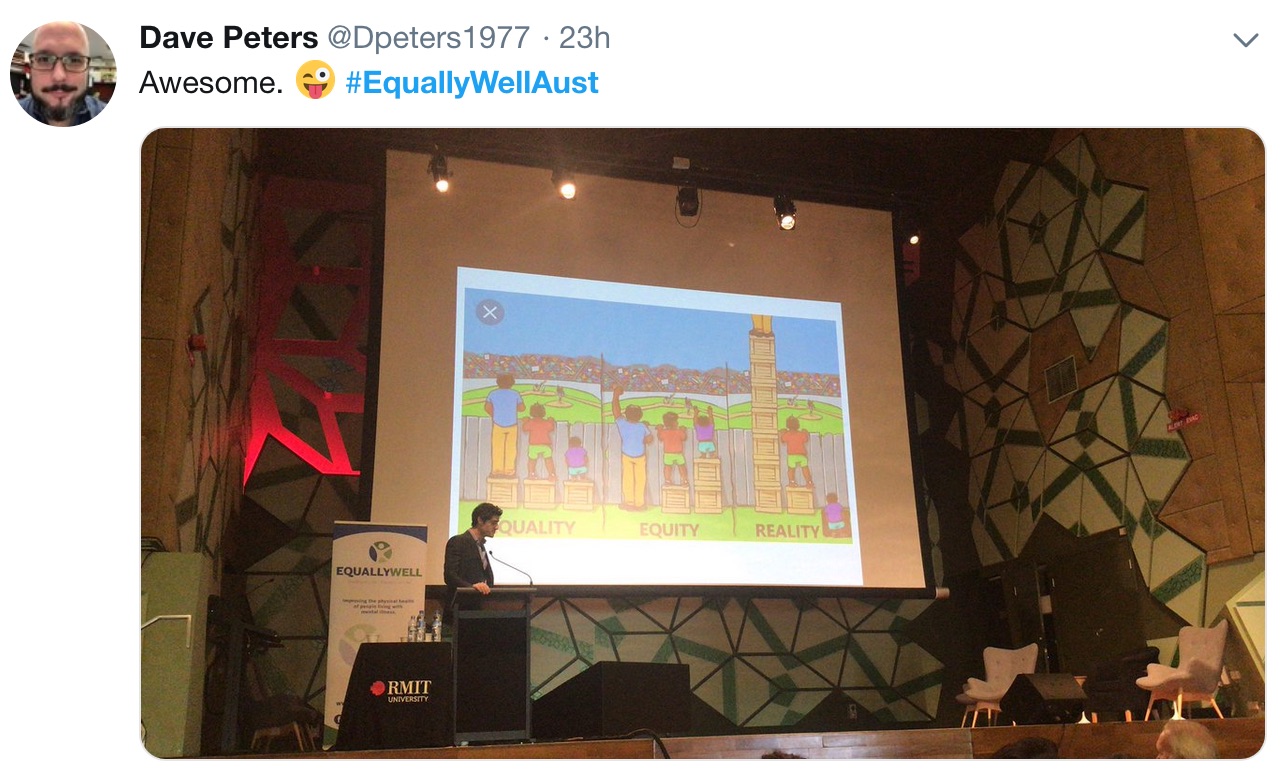 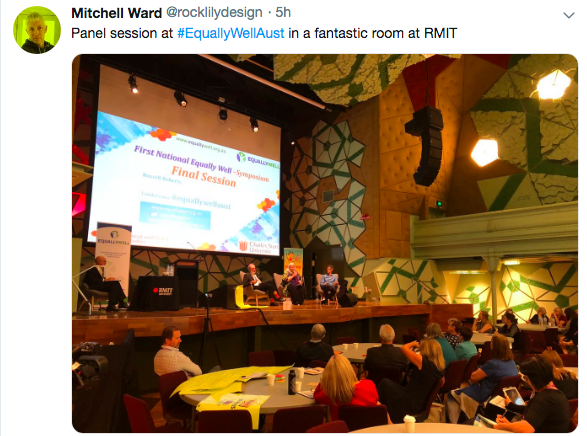 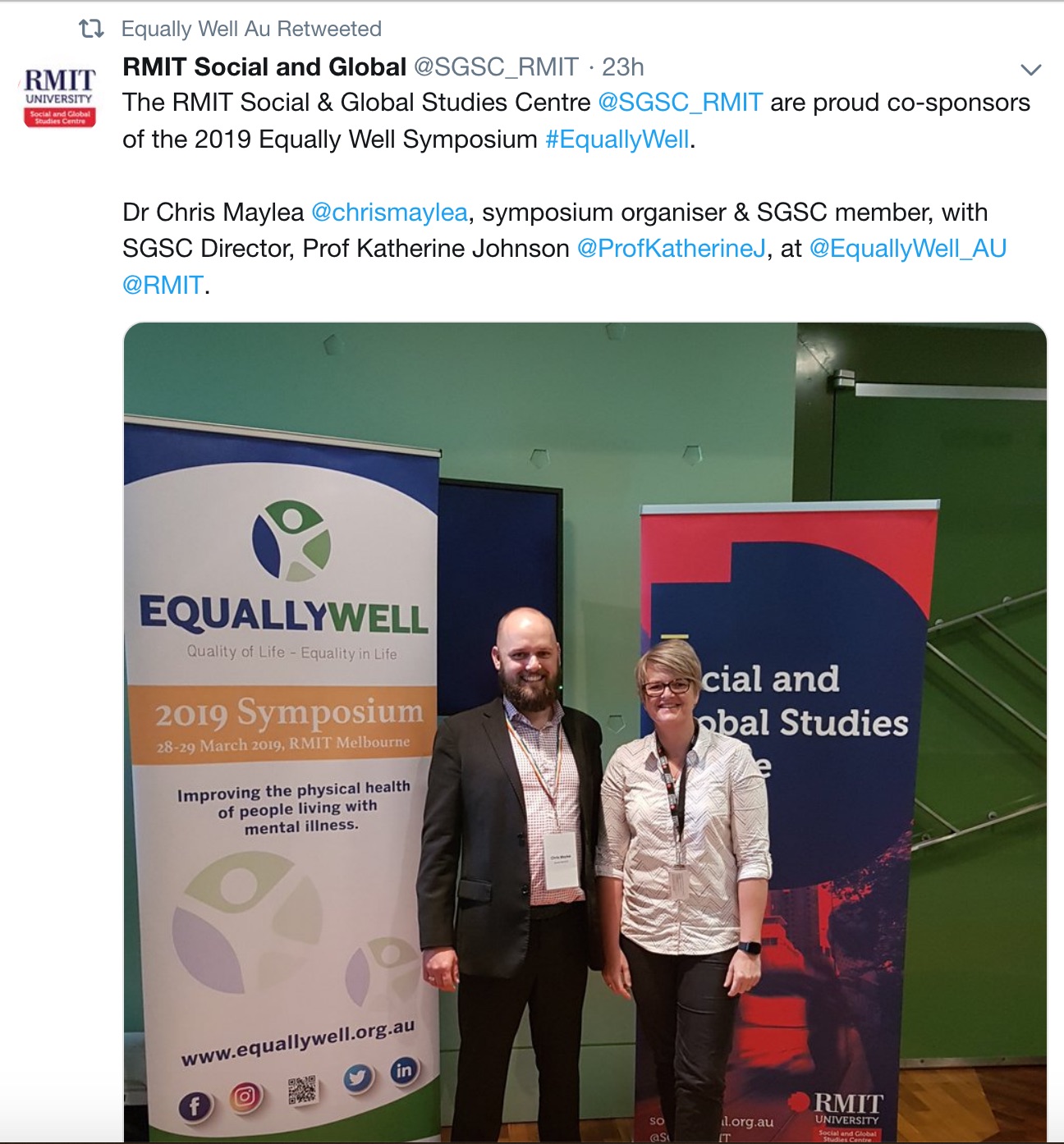