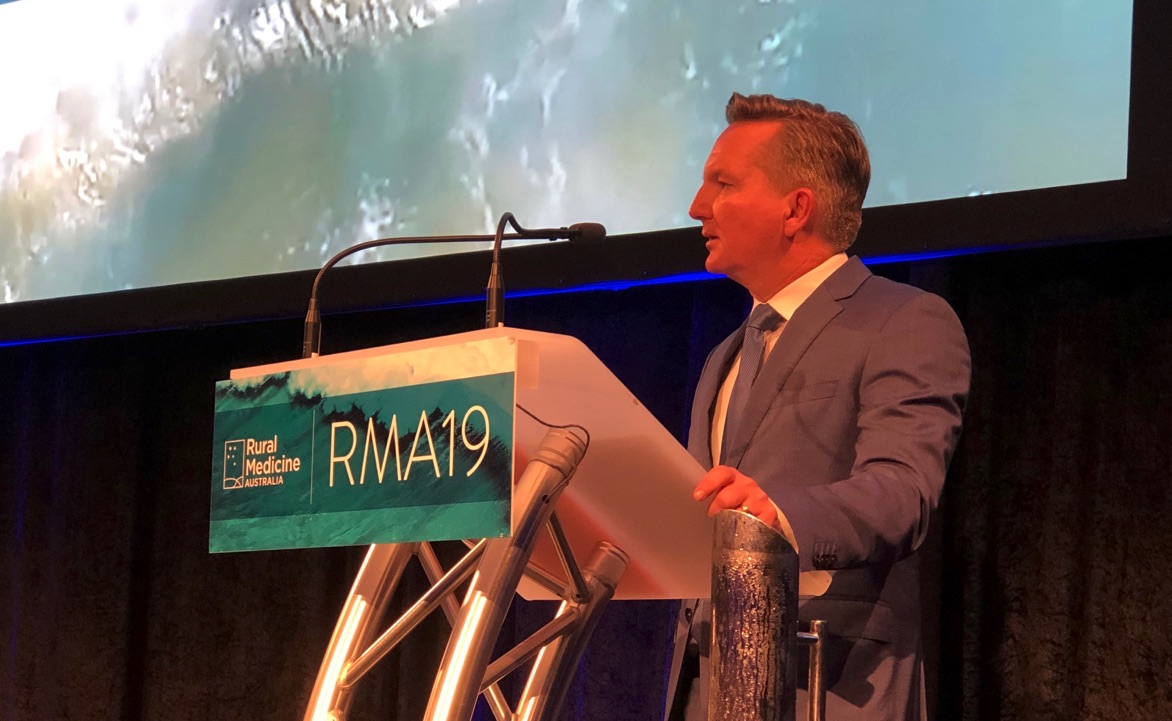 Newsflash! Politicians talk about social determinants of health and prevention at #RMA19

Introduction by Croakey: Political leaders called for a greater focus on tackling the social determinants of health and increased investment in preventing illness and suffering at the Rural Medicine Australia conference on the Gold Coast last week.

Shadow Health Minister Chris Bowen cited Sir Michael Marmot’s work in calling for the impending national strategy on preventative health to focus on the social determinants of health in rural and regional Australia (read more from Croakey on plans for the National Preventive Health Strategy).

“Unless and until we have tackling the social determinants of health at the core of health policy, we will not be tackling one of the key challenges and opportunities for health,” he said.

Read Chris Bowen’s speech below and then see some of the tweet reports from the Miles presentation.

Rural Medicine Australia is the peak national event for rural and remote doctors of Australia, and hosted by the Australian College of Rural and Remote Medicine (ACRRM) and the Rural Doctors Association of Australia (RDAA)

I acknowledge the Traditional Owners of the Gold Coast area, the Yugambeh People, and pay my respects to their elders past, present and emerging.

I also acknowledge our hosts, ACRRM and the RDAA, as well as my parliamentary colleague Mark Coulton.

I was keen to accept your invitation, because the issues you are dealing with are also important priorities for me in the health portfolio. I also wanted to thank you for the work you do individually in your communities and the work you do collectively to promote the importance of medical service provision in rural, regional and remote areas.

The disparity of health outcomes between rural and metropolitan dwelling Australians has to be a priority for health policy.

It’s certainly been an issue which has had my attention in my relatively brief time in the portfolio so far.

One of my first visits as Shadow Minister for Health was to Kintore, 600 kilometres west of Alice Springs. I also spent three days in rural NSW with my colleague Senator Deb O’Neill, talking to front line professionals about health service provision in rural Australia. For the same reason I’m heading to Kalgoorlie next week.

This issue is important for two reasons.

Firstly, it is a matter of social justice. Of fairness. We pride ourselves on being the land of the fair go, but the fact that your postcode determines your health is challenge to that conception.

Secondly, the fact that health outcomes in rural Australia are significantly below those of metropolitan Australia provides us with a roadmap as to where properly targeted investment can have the best return when it comes to improving health outcomes for all Australians.

We know the facts.

And of course, that drives the ultimate rural health inequality – lower life expectancy.

Put bluntly, people in regional, rural and remote Australia die up to 15 years earlier on average.

Now when we talk of rural health, the conversation turns quickly to service provision, which is of course important and I will turn to a little later in my remarks.

But service provision only responds to the flow-on effects of poorer health outcomes in the first place.

Education and employment rates are lower in the bush – sometimes much lower.

Social determinants like those contribute to the much higher prevalence of risk factors that we see in the bush.

When you combine those factors with poor access to services, you get much higher rates of illness and injury.

I believe we need a much bigger focus on preventative health in Australia. In Australia we spend 1.3 percent of our health budget on prevention.

The OECD average is five percent.

As Sir Michael Marmot puts it in his brilliant book “The Health Gap”, medicine is simply failed prevention.  And we confuse “health” and “health care” far too readily.

It is good that the Government is now recognising the importance of preventative health with the Preventative Health Strategy Taskforce.

But I do have to make this point, that this is simply catching up and we have had six years of missed opportunities when it comes to preventative health.  The effective abolition of the Preventative Health Agency in the 2014 budget was a huge backwards step.

But we are where we are, and the Preventative Health Strategy Taskforce is an important opportunity in my mind to focus on the social determinants of health in rural and regional Australia in particular.

There are three questions that I believe we need to pose when considering the state of our health system and where we take health reform. I think they are an equally relevant and useful way to think about rural health.

First, can Australians access affordable health care when and where they need it?

Second, do all Australians have a fair shot at a healthy life?

And third, are we reforming our health system to improve outcomes and meet the demands of the future?

Unfortunately, I think the answer to each of those questions is currently no.

Everyone in this room knows that people in regional, rural and remote Australia can’t access health care when and where they need it.

The chances of waiting more than 24 hours for an urgent GP appointment are more than 40 percent higher in the bush.

And people in the bush are 35 percent more likely to skip seeing a GP because they can’t afford the co-payment.

Worryingly that’s set to get worse, with bulk billing now declining everywhere outside our major cities.

And there are other threats to service provision in the bush – like the GP trainee shortage that you and others have been highlighting for some time.

You know it, and you are working hard to try and remedy it. But you won’t do it alone, you need the attention of Government to help you make progress. Well, you certainly have my attention.

On the second question about whether Australians have a fair shot at health, the evidence is also clear that we have a long way to go.I’ve talked about the figures for rural Australia already.

I also know this as a resident of, and representative for, Western Sydney.

Unless and until we have tackling the social determinants of health at the core of health policy, we will not be tackling one of the key challenges and opportunities for health.

And this brings me to the third question: are we reforming our health system to improve outcomes and meet the demands of the future?

And we support the Government’s trials of coordinated models of care, as well as new MBS telehealth items from next week.

In my time so far as Shadow Health Minister I have seen impressive work being undertaken by doctors and allied health professionals working together on comprehensive care plans for sufferers of chronic disease. Some are using impressive technology to allow patients to interact with their entire health care team and telehealth is part of the mix.

But we need to acknowledge there is a long way to go until Medicare can truly be said to have caught up with available technology and properly remunerates best practice in chronic health management. This will need to be a focus for health reform in coming years.

I want to conclude with a point about life expectancy.

If we can make progress on that, we will be making a significant improvement in overall life expectancy. And we need to.

Because if the rural/metropolitan divide isn’t shocking enough, there is a very real chance that something even more shocking is about to happen to life expectancy in Australia.

Since the 1970s, Australians have enjoyed a sustained increase in our average lifespans.

Of course, that increase hasn’t been shared equally, most notably for Indigenous Australians.

But on average, a girl born today can expect to live around eight years longer than a woman born 40 years ago.

For boys the increase over that period has been even higher – 11 years.

But our progress has begun to stall.

The increase in life expectancy over the last five years was half that of the previous five years.

And late last year, the Australian Bureau of Statistics did something extraordinary.

For the first time, the ABS revised its projections for life expectancy downwards.

It had previously forecast that Australian women would eventually live to over 88, and men to over 85.

But it has now reduced those projections by more than two years.

And the ABS isn’t alone.

Melbourne University Professor Alan Lopez has also warned that life expectancy gains will be undermined or reversed by rising obesity and youth suicide, and stubborn rates of smoking and road deaths.

The ABS projections are for babies born in 2066, which begs the question of when exactly we’ll reach the tipping point where Australian life expectancy falls for the first time in our history.

I’m sad to say it could be next week.

The ABS will release updated life expectancy data on Wednesday. It will almost certainly show a continued plateauing, and could well show the first fall.

Now I don’t hold the current government entirely responsible for this stalling in life expectancy. There are big, intergenerational issues at play and other developed countries are facing similar challenges.

But the key fact remains, if life expectancy goes backwards for the first time since records began, that is a failing on a key performance indicator of health policy.

Health policy is designed, fundamentally to give Australians better and longer lives. If life expectancy is going backwards, health policy is failing.

If they don’t, they will have my harsh criticism. And these challenges will form the basis for Labor’s health policy at the next election.

Thank you again for the invitation to be here.

The work of rural health professionals is invaluable.

It needs to be acknowledged and celebrated, as much as we focus on what more we need and what more can be done.

I’ve had many meetings and interactions with the groups represented at this conference already in my time in the portfolio, and I know I’ll have many more.

Because I believe access to good health is a fundamental right of Australians, and its one that people in rural areas have a right to as much as every other Australian.  That’s what you do every day.  And you’ll always have my support and attention as you do so. 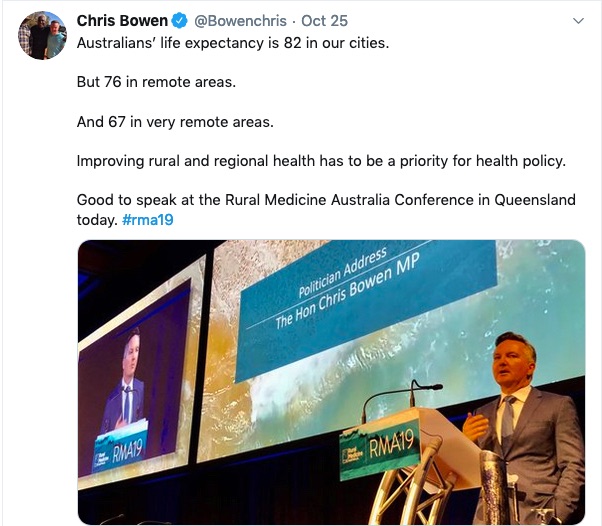 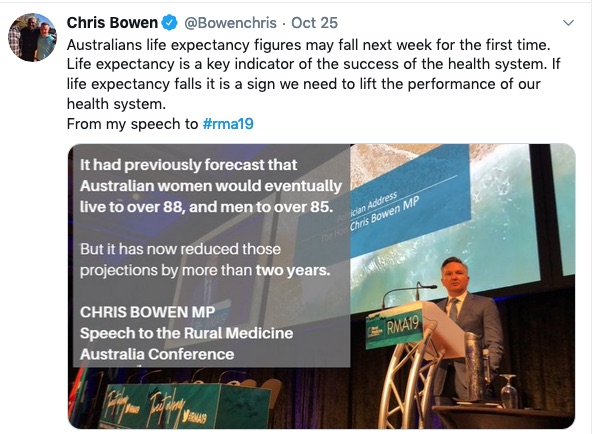 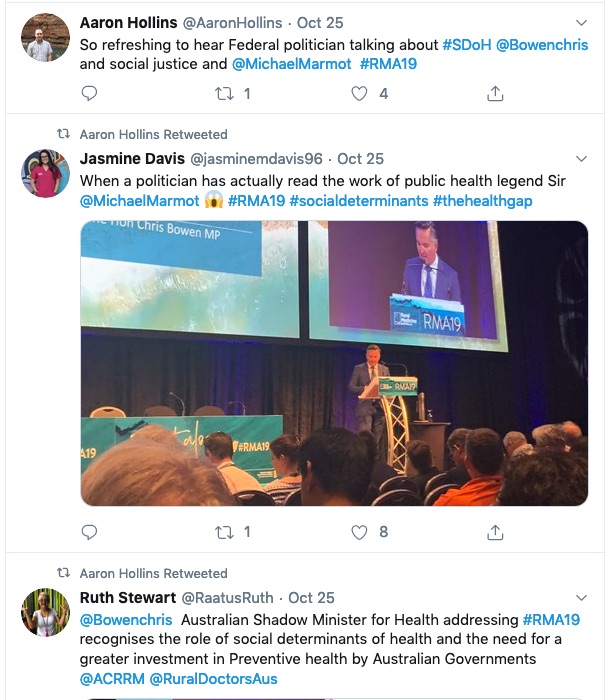 • Chris Bowen is the Shadow Minister for Health 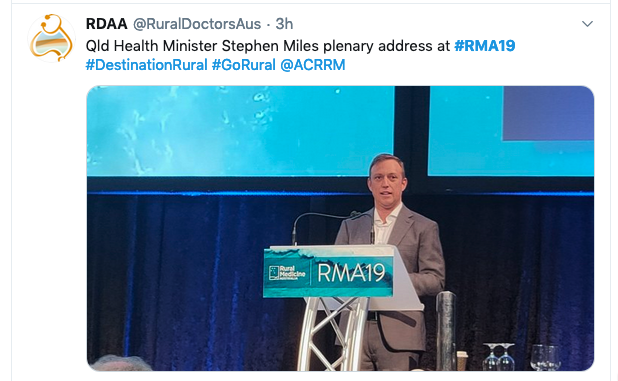 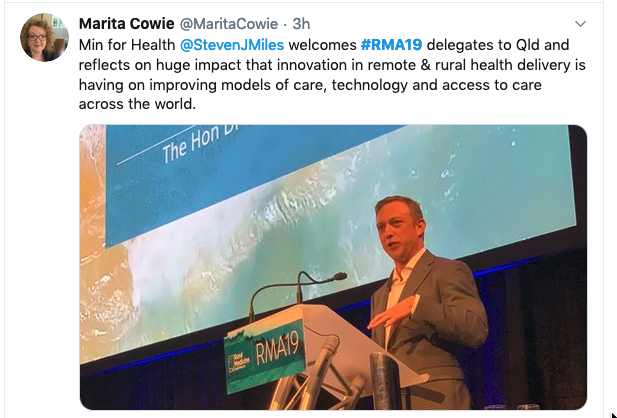 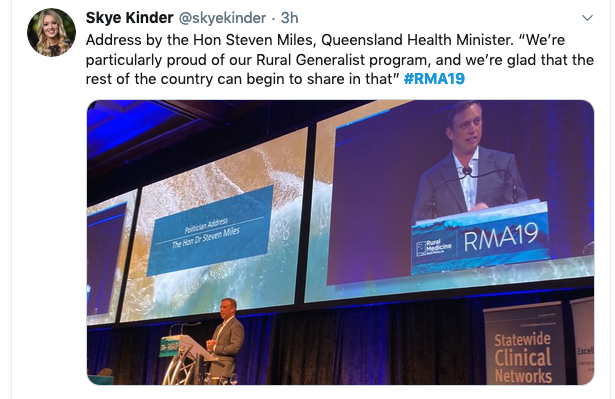 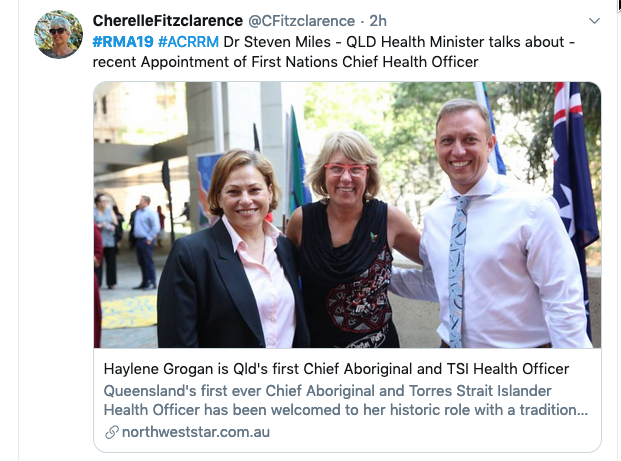 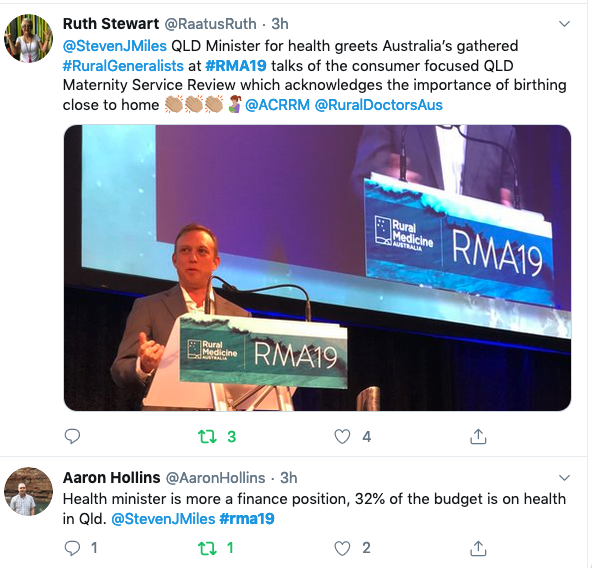 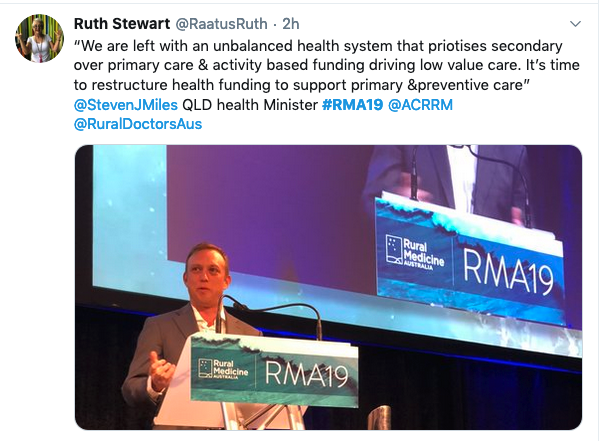 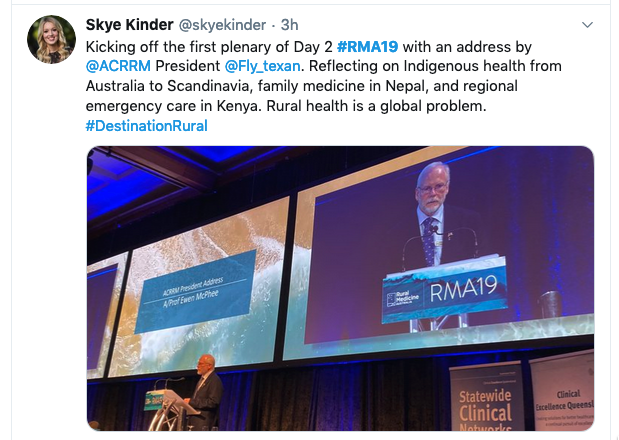 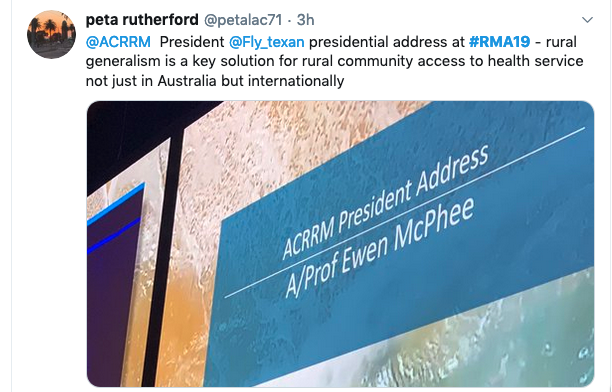 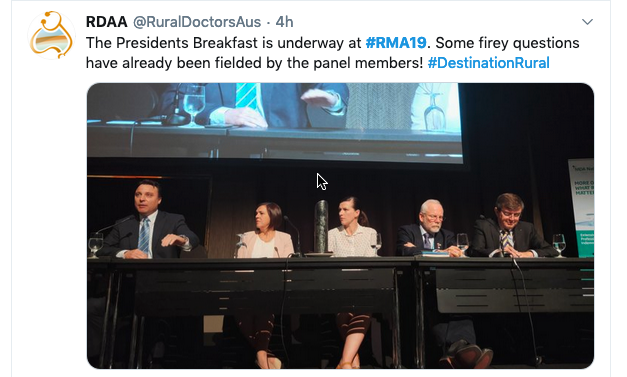