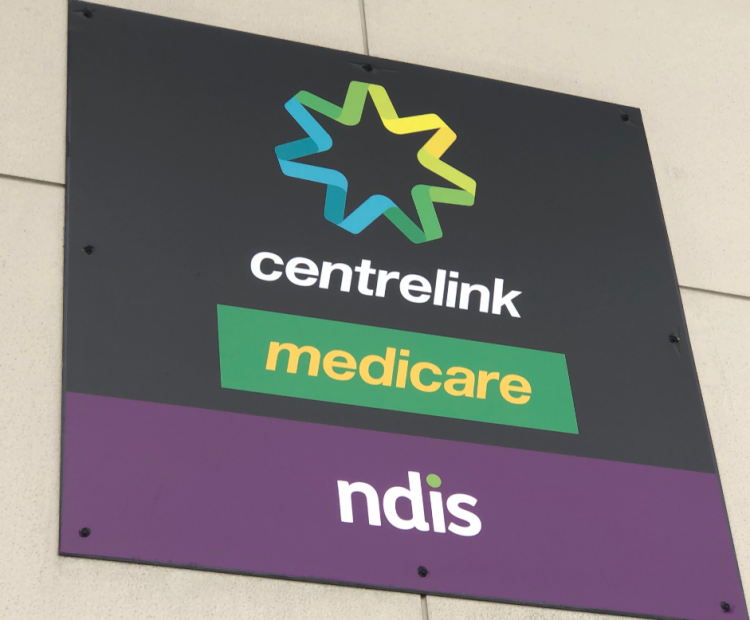 Newstart: “a sick policy in need of healthy rethink”

Newstart recipients are not only more likely to suffer ill health than other Australians but then struggle to get the treatment they need, according to the Consumers Health Forum of Australia (CHF) submission to the Senate inquiry into the adequacy of the income support payment.

The CHF is one of 70 organisations whose submissions to the inquiry have now been published, ahead of public hearings next week in Canberra and Sydney, and as the one-day public hearing was held in Canberra on Wednesday for a shorter Senate inquiry into the Federal Government’s widely condemned proposal for drug testing welfare recipients.

Chaired by Greens Senator Rachel Siewert and not due to report until next year, the Newstart inquiry is being held in response to the Federal Government’s refusal to urgently lift the rate of Newstart, despite so many key organisations, including the Business Council of Australia, backing the #RaisetheRate campaign.

Croakey will publish a mini-series drawing from the submissions, which detail many harrowing personal experiences of trying to live, or just survive, on the lowest of low welfare rates and the additional impacts on health and wellbeing of harmful compliance regimes.

Many call not only for an immediate increase in the paltry allowance by $75 a week but for the establishment of an independent commission to set the rate of Newstart in future to, as Guardian Australia reported, “end the politicisation of welfare payment rates”.

This first article features the submissions from the CHF, cohealth and Good Shepherd Australia New Zealand.

I often skip meals to reduce cost which exacerbates my chronic illness.”

“[I] have to spend the time in bed watching for my next payment from Centrelink so I can budget in a doctor’s visit as I don’t just have $40 laying around.”

“I could hardly ever afford to eat myself on Newstart. Although I am a young woman and ordinarily very healthy I was forced onto Newstart because I got a sudden and serious illness, my recovery was slower because during times I wasn’t in hospital I really struggled to buy any food for myself.”

These comments are from Newstart recipients who responded to a Consumers Health Forum of Australia (CHF) survey that has graphically informed its submission to the Senate Inquiry.

They provide shocking insights into how, as CHF CEO Leanne Wells said, so many recipients of Newstart and their children “are haunted by health problems the rest of us can have treated promptly”.

It was hell. I just wanted to go study and better myself, but the drop to student payments would have left me homeless. It nearly brought me to tears going shopping and having to decide which 90c cans of food to put back. I was always stressed and contemplated suicide often.”

“It’s depressing having to choose between using tampons and hygiene products or eating. It’s depressing having to use what little money I have to pay for bus fare to get to an appointment so what little assistance I do get isn’t cut off, and I am left with nothing, and risk losing my living arrangements. And it’s depressing and a real blow to your self-esteem when you have to put back groceries because you’ve gone over the small amount of money you have to feed yourself.”

“I have anxiety every time I have to walk in there, get a letter from them or a call from them -and I don’t have anxiety outside of this, the environment and way I’ve been treated in the Centrelink system for the past year has given me anxiety.”

CFH points out that while Newstart recipients are able to access prescription medications at a concessional rate, many still cannot afford to get their scripts filled and “even small out of pocket costs can be a barrier to accessing care”.

Many recipients are also unable to afford over the counter medications which are not covered by the Pharmaceutical Benefits Scheme but are important for managing episodes of illness. Survey participants said:

Couldn’t afford my depression medication. A state largely brought on by my not being able to afford basic household things.”

“A skin infection got totally out of control. I did not have the cash to buy the creams.”

“Luckily it isn’t my only source of income but I’m still on a tight budget and sometimes can’t afford to fill my antipsychotic prescription which costs around $150/month.”

“I haven’t seen a dentist in years. I also avoid filling scripts for antibiotics and am slowly trying to decrease my antidepressant medication to bring the cost down“

CHF reports that when Australians need to see a GP, Medicare picks up all or most of the bill, but when they need to see a dentist, “they are on their own”.

For people relying on income support payments, meeting the cost of private dental care is often simply not an option and they can then spend years on public dental wait lists.

For jurisdictions where public dental care also charges a co-payment, any dental care can be unaffordable and so people live with significant pain or lack of function, which the CHF says also can be a barrier to gaining employment.

“I also have to have both of my wisdom teeth taken out. I got through the public waiting list fine, but when it came to my turn, I simply couldn’t afford the $300+ dollars for the surgery and then travel and accommodation costs on top of that.”

“I need to see a dentist, but that wouldn’t be covered under Medicare, so I haven’t gone. My teeth bleed sometimes.”

CHF says the cycle of disadvantage is best explained by one of its survey respondents who said:

…there seemed to be no way out. I was sick and couldn’t afford to get better.”

“In a country that prides itself on universal access to healthcare, no one should be in a situation where they cannot afford to recover from illness or be in good health,” the CHF said.

Victorian community health organisation cohealth details how low Newstart is: the rate for a single person is $278 per week – less than $40 per day, more than $100 per week below the poverty line, and less than 40 per cent of the minimum wage, with the Youth Allowance even less.

“Despite government claims that Newstart recipients receive other payments, the reality is that the only payment that all receive is the Energy Supplement, of $4.40 per week. Other payments, such as rent assistance and family payments are designed to meet additional expenses, such as the cost of raising children,” its submission says.

cohealth says the impacts of the low rate of Newstart Allowance have been thoroughly documented over many years by many organisations and individuals, with common experiences including struggling to meet the costs of housing, utilities, food and job search, going without meals, and children unable to participate in school and community life.

cohealth clients reflect those experiences but also describe the significant impacts on their physical and mental health because, like those surveyed by CHF, they:

There is no way for me to pay for essential medication or treatments – hindering my health in many ways. I also cannot afford private health insurance in order to access adequate mental health care.” Newstart recipient

A big concern is for the 25 percent of people on Newstart who have a serious disability or illness that means they have partial capacity to work.

With higher healthcare and medication costs, reduced capacity to work, and facing discrimination in the labour market these people face serious struggles surviving from day to day.”

The submission calls the Federal Government to account by quoting Health Minister Greg Hunt in the recently released Australia’s Long Term National Health Plan that “good health is essential to our happiness and wellbeing”.

With Newstart recipients unable to meet the costs of health care, “this goal is out of their reach,” cohealth said.

The organisation also highlights the impact of “increasingly punitive and inflexible requirements” placed on recipients of income support payments, such as compulsory income management, ParentsNext, harsh sanctions regimes, unreasonable job search and ‘mutual obligation’ requirements, and proposals for random drug testing, saying they all “demonise and stigmatise people, and cause significant stress”.

It says the income support system also fails to meet the needs of people with fluctuating capacity to work, including those with episodic physical and mental health conditions.

“It is highly rigid and complex, and penalties for missing appointments and deadlines (activities that can pose particular challenges for people experiencing mental illness) can result in loss of payments,” the submission said, calling for greater flexibility, more accommodating processes and more reasonable evidence requirements to enable people who are unable to work to move on and off payments more easily as their needs change.

The burden on women

It spoke with 26 single mothers about life on Newstart and found some women went without eating while others relied on food banks or family members to meet essential costs.

Here are just a few of their stories: 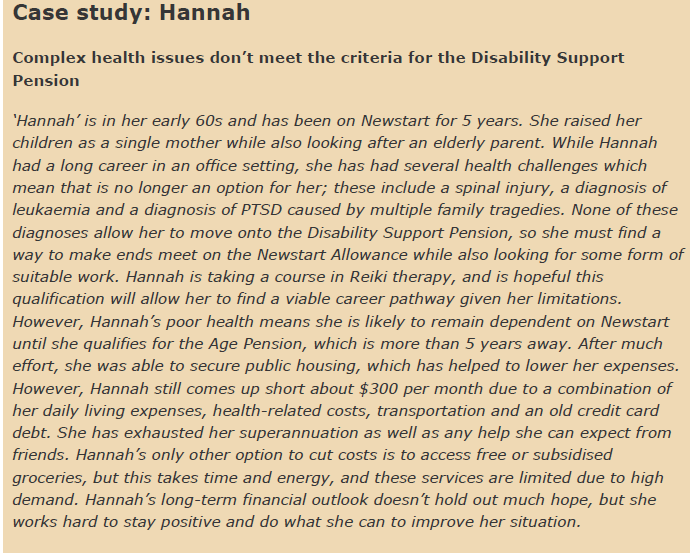 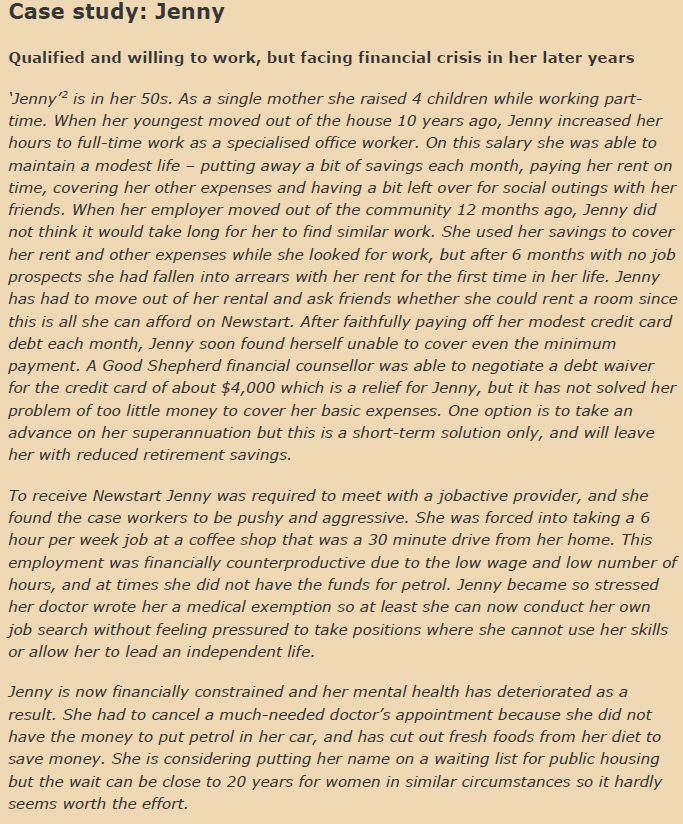 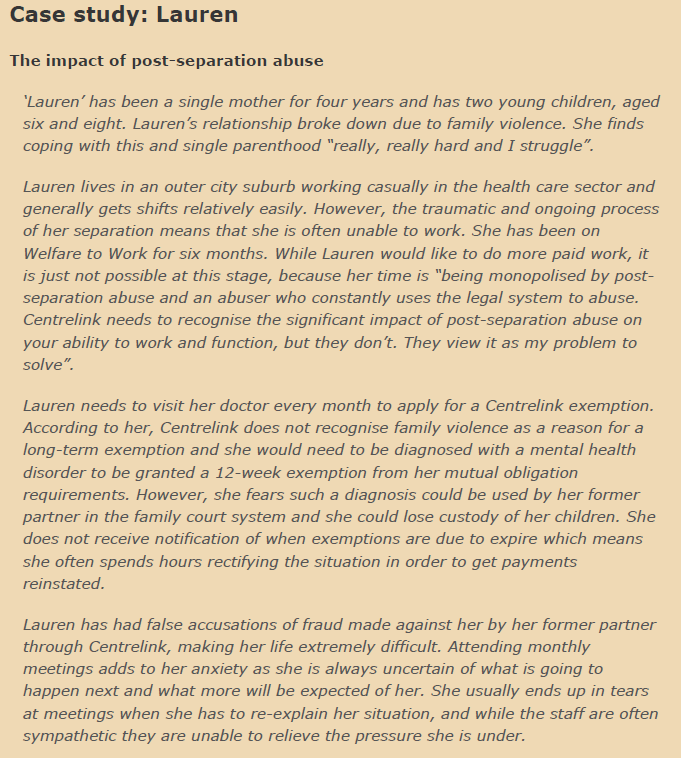 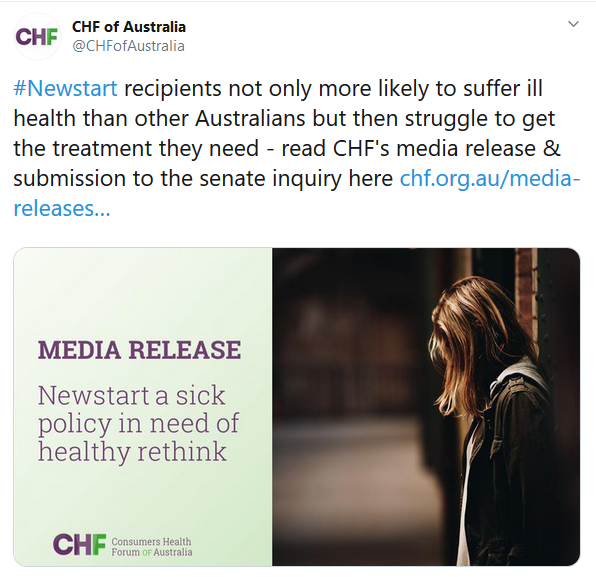 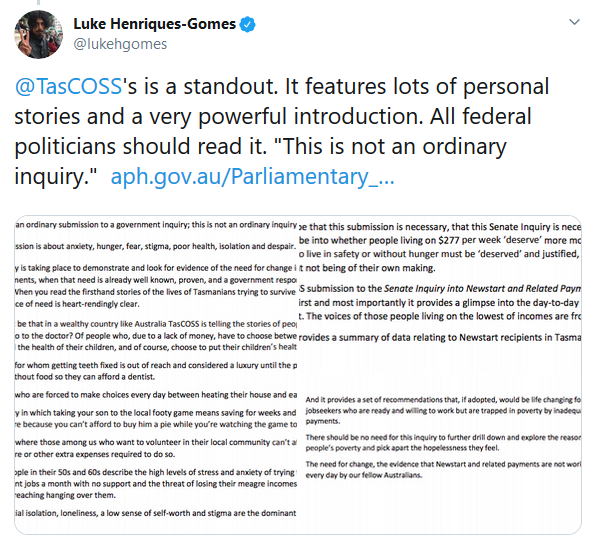 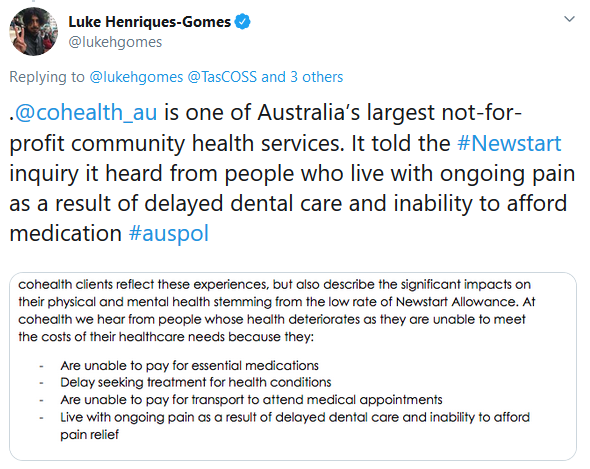 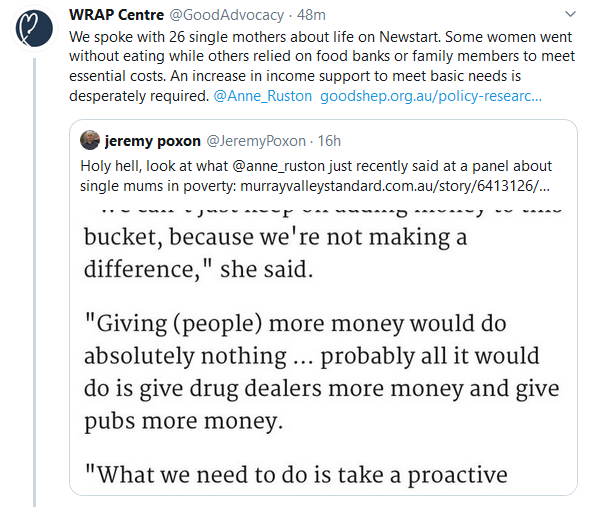