From Canada's Truth and Reconciliation investigation

No longer ‘the disappeared’: Mourning the 215 children found in a mass grave at Kamloops Indian Residential School

Five years ago, Chief Wilton Littlechild talked at a Lowitja Institute conference in Melbourne about leading a seven-year truth-telling investigation by Canada’s Truth and Reconciliation Commission into the country’s “saddest, darkest, most unknown history”, to unveil the truth about tens of thousands of Indigenous children taken from their families and put into government-funded church-run Indian Residential Schools, where many suffered abuse too.

The devastating truth continues to be unveiled.

In the article below, originally published at The Conversation, Veldon Coburn, Assistant Professor at the Institute of Indigenous Research and Studies at L’Université d’Ottawa/University of Ottawa, writes about the shocking discovery last month of a mass unmarked grave of First Nations children, where control and brutality went beyond death.

A macabre part of Canada’s hidden history made headlines last week after ground-penetrating radar located the remains of 215 First Nations children in a mass unmarked grave on the grounds of the former Kamloops Indian Residential School.

Like 150,000 Indigenous children that were taken from their families and nations and placed in residential schools, the 215 bodies of children, some as young as three, located in Tk’emlúps were part of a larger colonial program to liquidate Indigenous nations of their histories, culture and foreclose on any future. To do this, Canada put into motion a system to “kill the Indian in the child.”

This system often killed the child.

While we currently have no evidence to determine the cause of death for each child, we know that they died a political death — these children were the disappeared.

The chilling discovery in Tk’emlúps reminds us of the larger project of aggressive assimilation.

Indigenous lives were broken down, sterilized of any trace of the gifts inherited from their parents and ancestors and re-packaged into Canadian bodies.

The brute nation-making scheme of the Canadian state looked to the existing infrastructure laid down by the prominent Christian churches. The churches were involved in population management almost from the moment of contact between European Crowns and Indigenous nations. The Catholic Church, which would go on to operate about 60 per cent of these schools, was a hawkish occupier.

Like branch plants in a vast production scheme, the state made good use of the extensive church network to co-ordinate the extraction of raw material— Indigenous children.

But the revelation of a mass disposal site for children — unrecorded and hidden — on the grounds of the Kamloops Indian Residential School tells us that the regulation of Indigenous life extended into death. 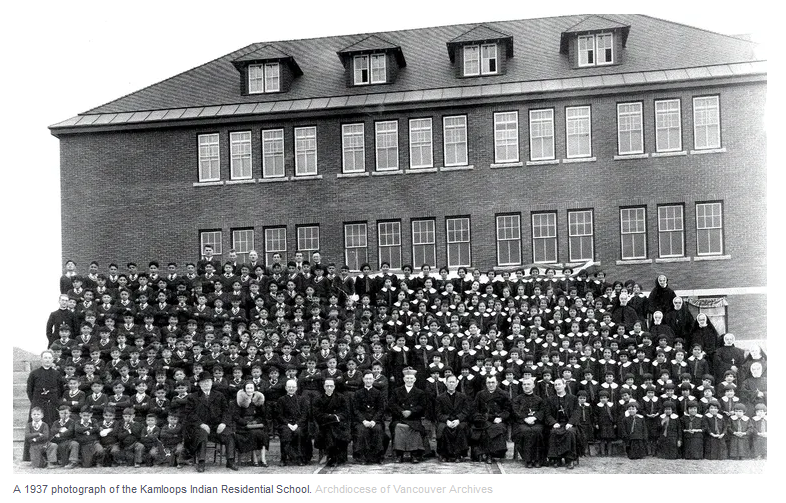 The politics of death and mourning

A fact many Indigenous people understand is that life’s benefits and burdens are shot through the colonial prism. As we go through life, we quickly learn that the weight of history’s finger is pressing firmly on the scale.

What is often overlooked is how that uneven distribution in life carries on through death.

Just as in life, how Indigenous death is mourned and remembered has been a matter of political control. The Canadian state, in partnership with the churches, has long unilaterally assumed sovereignty over Indigenous mortality and bereavement.

Nowhere is this more apparent than the atrocity at Tk’emlúps which has sharpened this for many Indigenous nations, as we see how the Catholic church not only denied these children the capacity to shape the means of and choose the ends of their life, but also they denied their communities control over their death.

In Tk’emlúps, the Catholic church decided that neither their lives nor their deaths were worthy of being known, remembered and commemorated.

One of the more appalling acts by the Catholic church in Tk’emlúps was how the children were deliberately forgotten; they were omitted from the official records that would verify their passing.

Documentation of death may seem clinical and lacking the human touch, but for some it has become crucial to contemporary remembrance.

It is one way, of many culturally divergent methods, of confirming death and allowing the dead to have a social afterlife with the living. The painful void that lingers is what researcher Pauline Boss called ambiguous loss, “a loss that remains unclear because there is no death certificate or official verification of loss; there is no resolution, no closure.”

The memory of the person and their remains may strike us as two separate matters, but they are intimately connected in many cultures.

Not unlike Catholicism, the material body figures centrally amongst many Indigenous rites and ceremonies that cultivate social continuity with the dead. Matthew Engelke, who studies the anthropology of death, tells us that:

“(W)hat commemoration often involves is much more than remembering the dead. It requires a serious engagement with the things that ghosts and ancestors want: a proper burial, a pot of beer, a feast, money, a fitting grave-stone, the blood of a reindeer, the blood of kin.”

The truth about the disappeared

The truth about the atrocity at Tk’emlúps escaped examination during the Truth and Reconciliation Commission (TRC). In the weeks before the TRC launched in 2008, the Catholic church was confronted with the allegations of a mass grave. Back then, the church denied any knowledge.

Until their remains were recently located, the Catholic church was content to leave 215 children as ‘disappeared.’

The disappeared — those that have been secretly disposed — produce a unique grieving. They leave families and communities in a state of suspended mourning, never sure whether their loved one is alive or dead, or where their remains have been left.

It is life abandoned to death with no chance of the living to intervene.

Now that they have been located, the surviving families, communities and Nations can begin to think about custodianship of the remains, mourning and memorialization. That much is up to them and every support and resource ought to be provided.

PrevPreviousRich nations like Australia urged to address the globe’s “dangerous gap” in vaccine equity
NextWhat have been the most-read articles at Croakey so far this year?Next