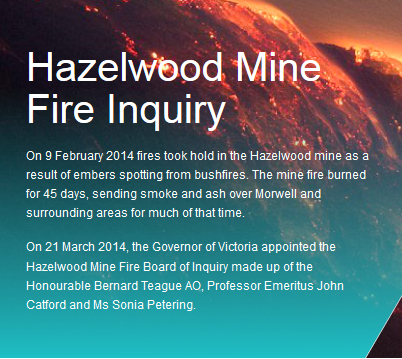 “Contrary to suggestions that the Hazelwood mine fire was the ‘perfect storm of events’, all of the factors contributing to the ignition and spread of the fire were foreseeable. Yet it appears they were not foreseen.”

The main findings of the inquiry into this year’s Hazelwood coal mine fire in Victoria are focused on what caused the fire that burned for 45 days, sending smoke and ash over the Victorian town of Morwell, and how the mine operator and Victorian authorities responded.

But the Hazelwood Mine Fire Inquiry findings also have broader implications, not least in planning and regulation of coal mining, particularly for regions like the Hunter Valley in New South Wales where new coal mines are being proposed near local communities.

As the Inquiry head, former Supreme Court Judge Bernard Teague (who also headed the Royal Commission into the 2009 Victorian Bushfires) told ABC Radio yesterday: “The major problem goes back 50 years…Just the fact that they started that mine less than one kilometre south of Wallace Street, where the bowling club is….”

See the article by Tim Flannery and Fiona Stanley that calls for consistent air, water and soil quality monitoring at and around every coal mine and power station in Australia, and for adequate funding for research to evaluate the health, social and environmental impacts of coal in coal mining communities.

But there is also a broader health dimension to the Inquiry’s 400-plus page report, which says the fire constituted two emergencies: a major complex fire emergency and a serious public health emergency.

The Inquiry’s Terms of Reference required the Board to inquire into and report on a range of issues, including the origin of the fire, the firefighting response, fire prevention and preparedness measures taken by the owner, operator and licensee of the mine and regulatory agencies, the fire’s impacts on the health and wellbeing of affected communities, and the response to the health emergency.

And most public concern has been about the short and long-term impact of the smoke and ash on the local community. The Victorian Government, facing an election in November, has already accepted (largely) all of the Inquiry’s recommendations, including that its planned 10 year study of the health impact be extended to 20 years.

But interestingly, the Hazelwood Inquiry also makes quieter recommendations for the Government to designate Morwell and the broader Latrobe Valley as a Health Conservation Zone, to not only address the impact of the fire but the broader social determinants of health.

It notes that the rural community already had significant health challenges before the fire and “does not enjoy the levels of health and social wellbeing of most other Victorians”.

It says specific improvements are needed, such as preventing and managing respiratory conditions, but also:

“System-wide improvements are also needed, such as strengthening community capacity and resilience, tackling the social determinates of health and providing hope and optimism for the community.”

“One way of providing a focal point for the coordination and integration of health services is to nominate the Latrobe Valley as a priority area for action across the health continuum. This has been undertaken in the UK and US, for example, by governments declaring geographical areas with high levels of health disadvantage as ‘Health Improvement Zones’, ‘Health Enterprise Zones’ or ‘Health Action Zones’.

As the Victorian Council of Social Service (VCOSS) pointed out in a statement:

“Morwell suffers from high rates of unemployment, low income earners, and high levels of disability. Morwell also has lower education levels, has a significant migrant and refugee population, and a large ageing population.”

“Morwell’s disadvantaged status meant it was more heavily impacted by the emergency. Research clearly shows that with less resources, social support, mobility and housing options at their disposal, disadvantaged and vulnerable people are at risk of being unable or less able, in the face of an emergency, to prepare for, and respond to, as well as recover from, the hazards and damages intrinsic to a disaster or emergency.”

Other important findings and recommendations of the Hazelwood Inquiry include:

Government agencies should have acted on data available in the first week that showed significant, potentially dangerous emissions from the mine likely to affect the people of Morwell. The Environment Protection Agency “put scientific rigour over and above the flexibility it needed to respond with less precise mobile equipment”.

It recommends that Victoria take the lead nationally to have the PM 2.5 air pollution advisory standard be converted into a compliance standard.

Advice provided by the Department of Health in low level and high level smoke advisories was generic and repetitive, with little practical advice about how to minimise the harmful effects of the smoke, nor whether schools and businesses should close and events be cancelled.

It recommended the Bushfire Smoke Protocol should contain a table of triggers detailing how and when people should respond to levels of smoke.

While the Department of Health sought input from GPs to understand the health demand, there was no evidence of active engagement to ensure a consistent, effective and trusted health response in the community.

The Chief Health Officer had sufficient information to issue the temporary relocation advice shortly after the weekend of 15 and 16 February 2014. Providing that advice to vulnerable groups in south Morwell on 28 February was too late. While air quality did fluctuate during the fire, this does not justify taking a ‘day-to-day’ approach to public health advice in connection with smoke from the fire that was predicted to burn for at least one month and was going to give rise to cumulative exposure to smoke over that month.

The basis for limiting temporary relocation advice to those in vulnerable groups living south of Commercial Road was poorly explained and was perceived by the community as arbitrary and divisive.

Here are some media wraps of the findings:

And here’s some of the Twitter response to the release of the report: 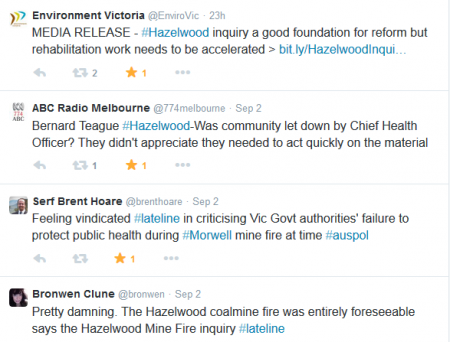 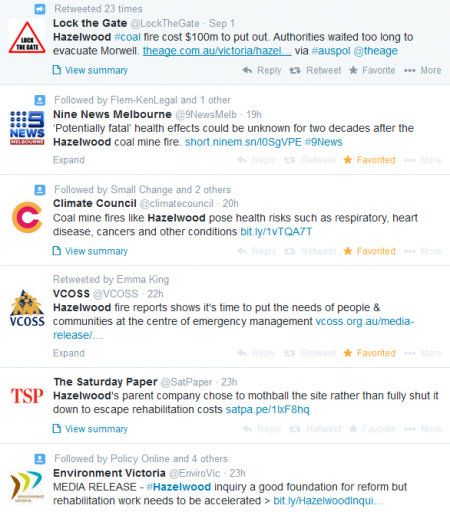 Disclaimer: Marie McInerney is a former publications editor at the Victorian Council of Social Service (VCOSS)

PrevPreviousWhither welfare? The risks of proposed changes to the Australian Institute of Health and Welfare
NextIndigenous leaders plea to PM Abbott to step in on “chaotic” policy, funding environmentNext