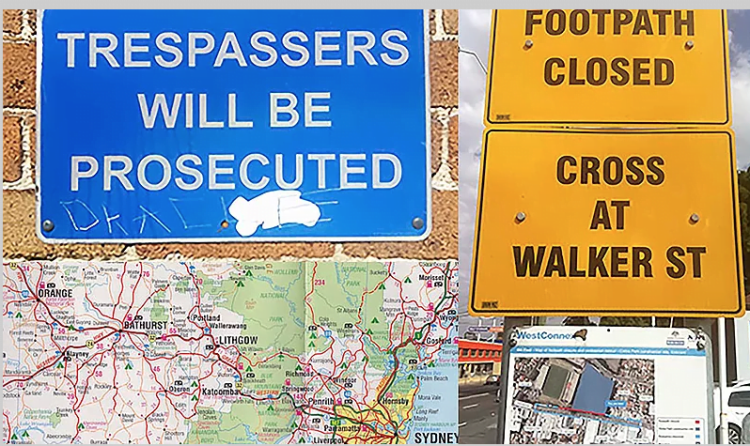 No Trespassing: the art and politics of walking from Sydney to Bathurst, NSW

Introduction by Croakey: On our first #CroakeyGo walk in Sydney last year, the Croakey team was joined by Pedestrian Artist, Molly Wagner. She shared with us how walking both inspired and became integrated into her art.

Since walking with us, Molly has continued her art project of walking the roads between Sydney and Bathurst NSW and has learned a great deal, with much more to go.

Below she shares some thoughts and images that remind us that the act of walking can be many things, especially when the lines are drawn between “the body, the wide-open world and the imagination”.

You can follow Molly’s project on her website, and be sure to watch this space for more walking journalism from the Croakey team in the near future.

I want to acknowledge and pay my respects to the Traditional Owners and Custodians of the lands on which I walk, on which I trespass.

Walking has been one of the constellations in the starry sky of human culture, a constellation whose three stars are the body, the imagination, and the wide-open world, and though all three exist independently, it is the lines drawn between them—drawn by the act of walking for cultural purposes—that makes them a constellation.

No Trespassing: the art and politics of walking in New South Wales is a process-based art project in which I walk the roads, highways and footpaths between Sydney and (eventually) Bathurst, New South Wales. The title highlights my sense of trespassing into lands and stories, despite my practice of walking in public places and pedestrian zones, e.g. footpaths, the shoulder of the road, tracks and stories published for general access.

I activate and share the historical and contemporary stories of these roads as a ‘Pedestrian Artist.’ My artworks; the walks, photo-media works, drawings and written reflections, are how I transform the roads into places rather than blurred images glimpsed through the windows of a speeding car.

My walks are artistic and political acts that resist and confound contemporary habits of speed, spectacle, paranoia and consumption. I believe that the physical, cultural and social constellation made by walking for cultural purposes has the potential to shift our anthropocentric attitudes and facilitate compassion and sensitivity in the complex relationships of the planet.

Walking is the oldest, most humane and most democratic form of transportation and is an activity that is encouraged as a way of improving physical and mental health, yet few people in Australia walk more than three kilometers per day. We are habituated to privilege the car. Consequently walking is often difficult, unsafe and distinctly unpleasant because of the pollution, constant noise and threats posed by motorised traffic.

I know from my experiences of walking and driving that the former offers very different and experiential forms of freedom, independence and interaction with the world than is possible when confined to the interior of an automobile. It is my hope that my walks, pictures and musings might inspire others to walk more and demand more walkability in our cities, suburbs and regional areas.

The project so far

No Trespassing began in January 2017 when I was told the story of the Wiradjuri warrior, Windradyne’s walk to Parramatta to attend the Governor’s Annual Feast in 1824. I was inspired by his bravery and fascinated by the thought of walking from Bathurst to Parramatta.

My previous art projects had focused on walking in the city however as a long-time pedestrian (I sold the family car in 2003), and one who has lived in suburban and regional areas, I am aware that being on foot is a far different and more challenging proposition for those living outside city limits. Windradyne’s walk to Parramatta was an inspiration for me to begin my artistic explorations of what it is to walk for long distances beyond the city.

No Trespassing, as of today, consists of seven ‘day-long’ walks between Sydney and Katoomba, one walk of two and a half days on the Bells Line of Road and a four day walk from Katoomba to the Jenolan Caves.

During these months of walking, research, making pictures and writing I wandered into layers of history and many questions about my position, as an artist, migrant, and older white woman. I have walked in an easterly and westerly direction guided by historical narratives including the British colonialists explorations through the Blue Mountains, Cox’s Road and Windradyne’s walk to Parramatta.

I gained a deeper understanding of the contemporary story of the much contested WestConnex walking the traffic laden Parramatta Highway. I met dogs that loudly protected their homes and horses that wore purple plaid blankets. Bellbirds sang a haunting chorus as I trudged up to Kurrajong Heights.

During these walks I experienced fear and peace, loneliness and incredible generosity of spirit from passersby, painful blisters, the unexpected beauty of a vibrant red waratah on a rain soaked morning and a profound sense of achievement. I juggled time, distance, picture taking and the weight of my pack and at the end of each walk I planned my next one using what I had learned on the road as a guide.

I made my first walk west of Katoomba from 30 March-2 April 2018 with my daughter, Rachel Heller-Wagner. We walked the Six Foot Track with a 16 kms detour along roads and through a property (with permission from the owner) in the Megalong Valley. I am planning another walk towards Bathurst later this month.

You can follow this link to No Trespassing where I have published the photographs made during the walks:

*Molly Wagner is a Pedestrian Artist. She uses a variety of media: drawing, photo-media and painting, to evoke the complex interactions and relationships that are intrinsic to walking. There will be an exhibition of the artworks of No Trespassing at Articulate Gallery on 25 June 2018.