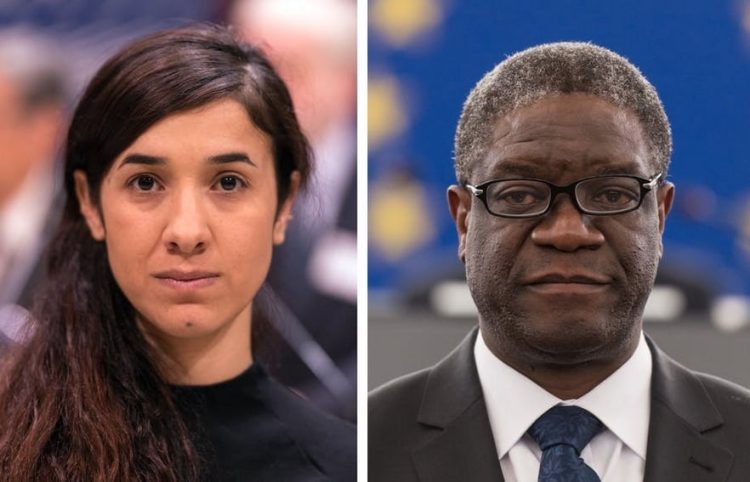 Nadia Murad and Denis Mukwege have been awarded the 2018 Nobel Peace Prize for their work in trying to end sexual violence during war and armed conflict. There are many tragedies in war and among the worst are victims of sexual violence. Women’s bodies have become battle sites and sexual violence a weapon of war.

Murad is one such victim, developing a global witness as a UN Goodwill Ambassador to the abuse she suffered as a Yazidi at the hands of Islamic State. She has campaigned for the protection of survivors of human trafficking.

Denis Mukwege is a medic based in the Democratic Republic of Congo and he and his staff have helped thousands of victims abused in its prolonged and bloody wars – and many more forcibly removed people besides. Mukwege also speaks, at much risk to himself, against Congolese governments and others who shield military rapists.

It is a comment frequently made that the Nobel Peace Prize is a contradiction, founded for “the abolition or reduction of standing armies and for the holding and promotion of peace congresses” by an armaments manufacturer, notable for inventing dynamite.

Handing over the awarding of the Peace Prize to a five-person committee appointed by the Norwegian parliament, rather than to Sweden, reflects Norway’s long-established engagement in facilitating peace negotiations. Well before the Peace Prize was inaugurated in 1901, the Norwegian government was assisting the European Inter-Parliamentary Union’s work on mediation, an involvement in conflict resolution that continues to this day.

Read more: The curious history of the Nobel Peace Prize

Peace is itself often politically controversial, especially when powerful nation states and multi-state alliances have conducted the war – and the award of the Peace Prize is invariably disputed. The Peace Prize is notable for the illustrious people omitted from its list of laureates as for those recognised by its award.

Mahatma Gandhi, Vaclav Havel and Eleanor Roosevelt are among a number who have failed to muster the prize – Gandhi was nominated five times to no avail. But politicians abound among its laureates – including those with dubious reputations, even at the time, such as Henry Kissinger.

Barack Obama, who was awarded in his first year as US president, seemed to get one simply for being elected as the first black president (he was still puzzled himself at the award even at the end of his second term). Relatively unsuccessful politicians can be given the award – for example one-term US president Jimmy Carter and unsuccessful presidential candidate Al Gore. People from Northern Ireland, with only 1.8m people, have won it twice. The US and the UK dominate the countries of recipients. It has also been won by 16 women – more than any other Nobel category.

It has been awarded to organisations on several occasions: the European Union won it for not being at war with itself since 1945, the International Committee of the Red Cross has won it three times, and the Office of the UN High Commission for Refugees twice. Only one nominee declined the prize, the Vietcong’s chief negotiator Le Duc Tho, who described it as bourgeois sentimentality. Two members of the awarding committee resigned in protest when it was determined to make the 1973 award to Le Duc Tho and Kissinger, while the results of the peace negotiations were still uncertain. Kissinger gave his prize money to charity and did not attend the ceremony.

Political controversies aside, the award committee has often got it right and the recipient is met with general acclaim. The 2018 recipients are such a case. As the prize committee said:

Denis Mukwege and Nadia Murad have both put their personal security at risk by courageously combating war crimes and seeking justice for the victims.’

Courage – in speaking out against sexual violence and in speaking for its countless victims – is the word that catches my eye in the committee’s comments. I think this word apt, for it applies as much to the victims themselves who have to live daily – if they survive at all – with the consequences of sexual violence.

I like to think the award is as much in honour of those victims as the two deserving recipients.

• John Brewer is Professor of Post Conflict Studies, Queen’s University Belfast. This article was first published by The Conversation UK.