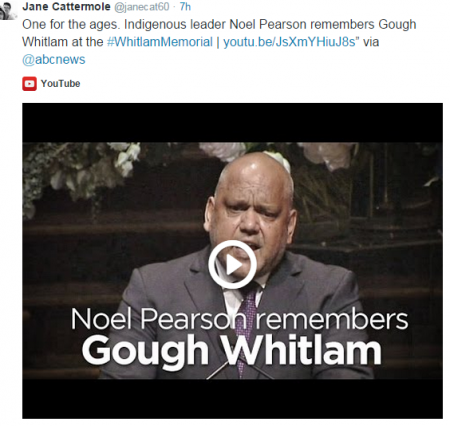 My chances in this nation were a result of the Whitlam program. My grandparents and parents could never have imagined the doors that opened to me which were closed to them.

I share this consciousness with millions of my fellow Australians whose experiences speak in some way or another to the great power of distributed opportunity.

Some was taken from his much longer 2013 Gough Whitlam Oratory, which is well worth the read.

As journalist David Marr wrote, Pearson’s speech was a standout, even in a room with award-winning actor Cate Blanchett and legendary speechwriter Graham Freudenberg.

Two men brought Whitlam most alive at the microphone: his old speechwriter and collaborator Graham Freudenberg, and his old friend and confidante Senator John Faulkner. Faulkner even dropped into The Voice as he told Gough jokes. But in his own voice Faulkner declared: “Whitlam made the Labor party electable. More importantly, he made the Labor party worth electing.”

But Noel Pearson raised the roof. He is beyond contest the greatest Lutheran preacher in the country. He barely mentioned Whitlam’s name as if he were honouring the dead in his own people’s way. He called him: “This old man.” He said: “This old man was one of those rare people who never suffered discrimination but understood the importance of protection against its malice.”

See an edited transcript below, or watch his speech and read the full transcript at the Sydney Morning Herald.

See also Cate Blanchett’s ode to free education and universal health care and here’s a link to From Little Things Big Things Grow – the song about the Wave Hill walk-off, performed by Paul Kelly and Kev Carmody in front of descendants of Vincent Lingiari who came to pay their respects.

Without this old man the land and human rights of our people would never have seen the light of day.

There would never have been Mabo and its importance to the history of Australia would have been lost without the Whitlam program.

Only those who have known discrimination truly know its evil.

Only those who have never experienced prejudice can discount the importance of the Racial Discrimination Act.

This old man was one of those rare people who never suffered discrimination but understood the importance of protection from its malice.

On this day we recall the repossession of the Gurindji of Wave Hill, when the Prime Minister said, “Vincent Lingiari, I solemnly hand to you these deeds as proof in Australian law that these lands belong to the Gurindji people and I put into your hands this piece of earth, itself as a sign that we restore them to you and your children forever.”

It was this old man’s initiative with the Woodward Royal Commission that led to Prime Minister Fraser’s enactment of the Aboriginal Land Rights Northern Territory Act, legislation that would see more than half of the Territory restored to its traditional owners.

Of course recalling the Whitlam Government’s legacy has been for the past four decades since the dismissal a fraught and partisan business.

Assessments of those three highly charged years and their aftermath divide between the nostalgia and fierce pride of the faithful, and the equally vociferous opinion that the Whitlam years represented the nadir of national government in Australia.

Let me venture a perspective.

The Whitlam government is the textbook case of reform trumping management. In less than three years an astonishing reform agenda leapt off the policy platform and into legislation and the machinery and programs of government.

The country would change forever. The modern cosmopolitan Australia finally emerged like a technicolour butterfly from its long dormant chrysalis.

And 38 years later we are like John Cleese, Eric Idle and Michael Palin’s Jewish insurgents ranting against the despotic rule of Rome, defiantly demanding: “And what did the Romans ever do for us anyway?”

Apart from Medibank and the Trade Practices Act

the Australia Council, the Federal Court, the Order of Australia

Apart from all of this, what did this Roman ever do for us?

And the Prime Minister with that classical Roman mien, one who would have been as naturally garbed in a toga as a safari suit, stands imperiously with twinkling eyes and that slight self-mocking smile playing around his mouth, in turn infuriating his enemies and delighting his followers.

There is no need for nostalgia and yearning for what might have been.

The achievements of this old man are present in the institutions we today take for granted and played no small part in the progress of modern Australia.

There is no need to regret three years was too short. Was any more time needed? The breadth and depth of the reforms secured in that short and tumultuous period were unprecedented, and will likely never again be repeated.

The devil-may-care attitude to management as opposed to reform is unlikely to be seen again by governments whose priorities are to retain power rather than reform.

The Whitlam program as laid out in the 1972 election platform consisted three objectives:

This program is as fresh as it was when first conceived. It scarcely could be better articulated today.

Who would not say the vitality of our democracy is a proper mission of government and should not be renewed and invigorated.

Who can say that liberating the talents and uplifting the horizons of Australians is not a worthy charter for national leadership?

It remains to mention the idea of promoting equality.

My chances in this nation were a result of the Whitlam program. My grandparents and parents could never have imagined the doors that opened to me which were closed to them.

I share this consciousness with millions of my fellow Australians whose experiences speak in some way or another to the great power of distributed opportunity.

I don’t know why someone with this old man’s upper middle class background could carry such a burning conviction that the barriers of class and race of the Australia of his upbringing and maturation should be torn down and replaced with the unapologetic principle of equality.

I can scarcely point to any white Australian political leader of his vintage and of generations following of whom it could be said without a shadow of doubt, he harboured not a bone of racial, ethnic or gender prejudice in his body.

This was more than urbane liberalism disguising human equivocation and private failings: it was a modernity that was so before its time as to be utterly anachronistic.

For people like me who had no chance if left to the means of our families we could not be more indebted to this old man’s foresight and moral vision for universal opportunity.

Only those born bereft truly know the power of opportunity.

Only those accustomed to its consolations can deprecate a public life dedicated to its furtherance and renewal.

This old man never wanted opportunity himself but he possessed the keenest conviction in its importance.

For it behoves the good society through its government to ensure everyone has chance and opportunity.

This is where the policy convictions of Prime Minister Whitlam were so germane to the uplift of many millions of Australians.

We salute this old man for his great love and dedication to his country and to the Australian people.

When he breathed he truly was Australia’s greatest white Elder and friend without peer of the original Australians.

Here are some tweets from the memorial service 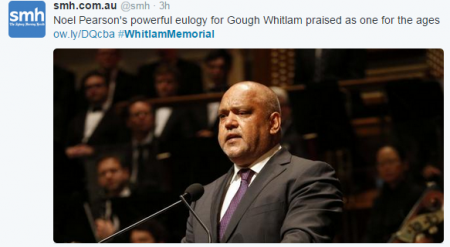 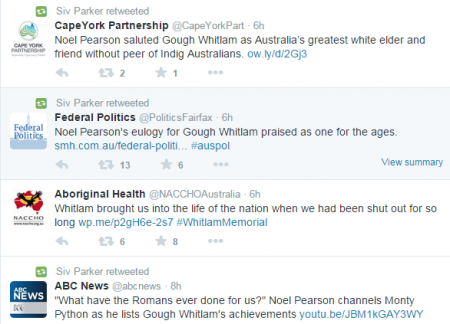 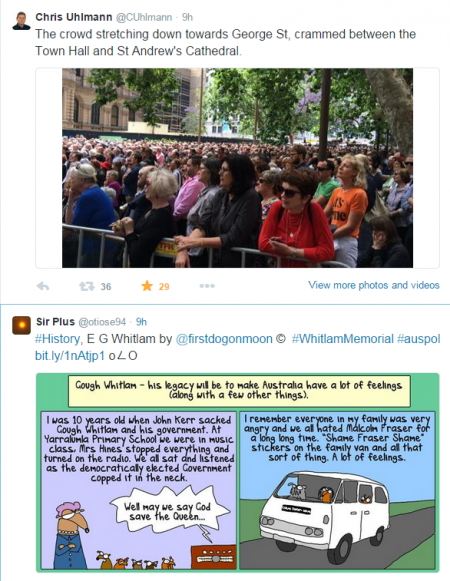 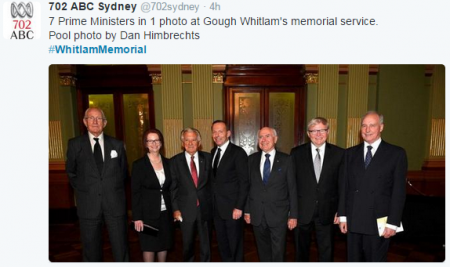 PrevPreviousAustralia to outsource response to #Ebola in west Africa
NextUnpacking the IPCC’s latest climate change report, news on heatwaves and a warning on mental healthNext