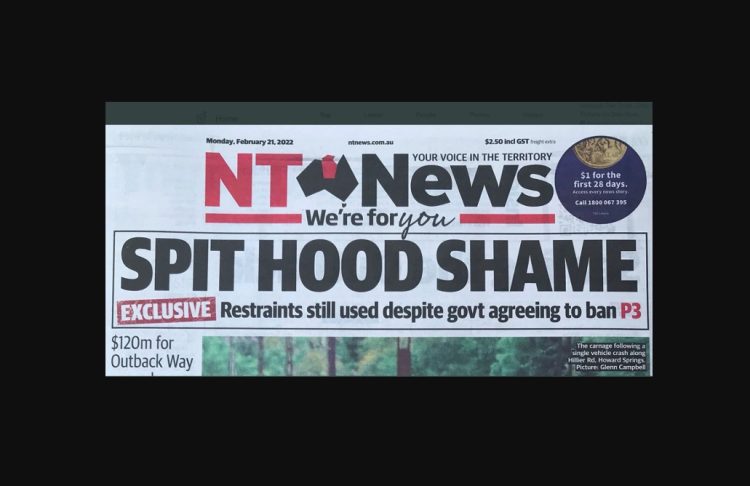 Northern Territory Government condemned over use of spit hoods on children

Revelations this week that Northern Territory police are continuing to use spit hoods on children have met with widespread condemnation.

An online petition is urging a national ban on their use, following the lead of South Australia late last year. 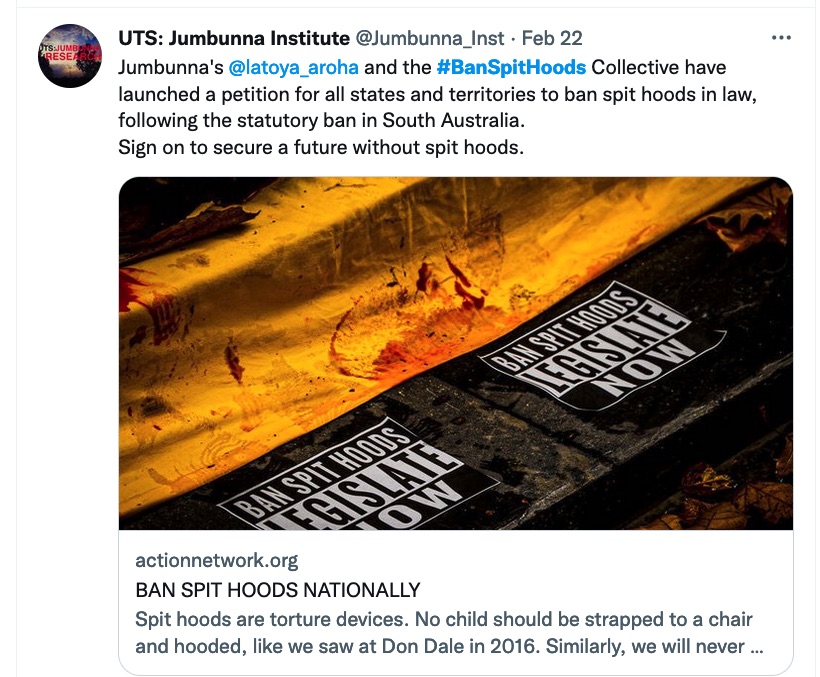 Aboriginal leaders and community sector advocates are calling on the Northern Territory Government to stop playing games on the detention and protection of children.

The Royal Commission into the Detention and Protection of Children in the Northern Territory was clear in its findings that spit hoods can cause distress.

The Royal Commission recommended the use of spit hoods and restraints be prohibited in the NT and those recommendations were fully supported by the Gunner Government.

The Territory Government again confirmed its position on the use of spit hoods and restraints in Parliament just last year.

In debate on the Labor Government’s new bail laws, Minister Kate Worden told Parliament: “We will not reintroduce things like spit hoods or strapping young offenders into chairs, and we will not be locking them up 24 hours a day in solitary confinement.”

“At a time when we have been working to build better relationships with NT Police over COVID-19, the use of these methods betray our young people – instead of therapeutic rehabilitation, we are seeing retribution.

“Yes, young kids do get in trouble – no one denies that – but to respond with the violence that has been condemned by the 2016 Royal Commission is totally the wrong answer.”

Danila Dilba Chief Executive Rob McPhee says the use of spithoods in unacceptable.

“Spit hoods are degrading and harmful to young people with the very real risks of asphyxiation and choking,” Rob McPhee said.

“Their continued use is a direct retreat from the recommendations of the Royal Commissions, not to mention a backflip to statements made by representatives in both Governments in 2016, committing to prohibiting the use of spit hoods.

“The fact that spit hoods are increasingly used is alarming and should stop immediately.”

The North Australian Aboriginal Justice Agency Principal Legal Officer David Woodroffe says the use of spit hoods and restraint on children must stop.

“The NT Government must act now to end the inhumane use of spit hoods and restraint chairs in police watch houses,” David Woodroffe said.

“We should be following South Australia’s lead and introducing urgent legislation to prohibit their use in police custody.

“Police watch houses are not the best place for children at-risk of harm. We need to adopt alternative strategies which focus on mental health approaches,” he said.

“The Northern Territory Government has accepted international kudos for banning the use of spit hoods and restraints on children in the NT,” Deborah Di Natale said.

“Now we find those devices are still in use and the NT Government is trying to rewrite history on the commitments it made by introducing new caveats on its promises.

“The social impacts and financial costs of crime and corrections are staggering, and this community deserves an evidence-based approach to addressing that.

“The Royal Commission provided a road map for change and the Territory Government must honour its commitment to implementing those recommendations for the betterment of all Territorians,” she said. 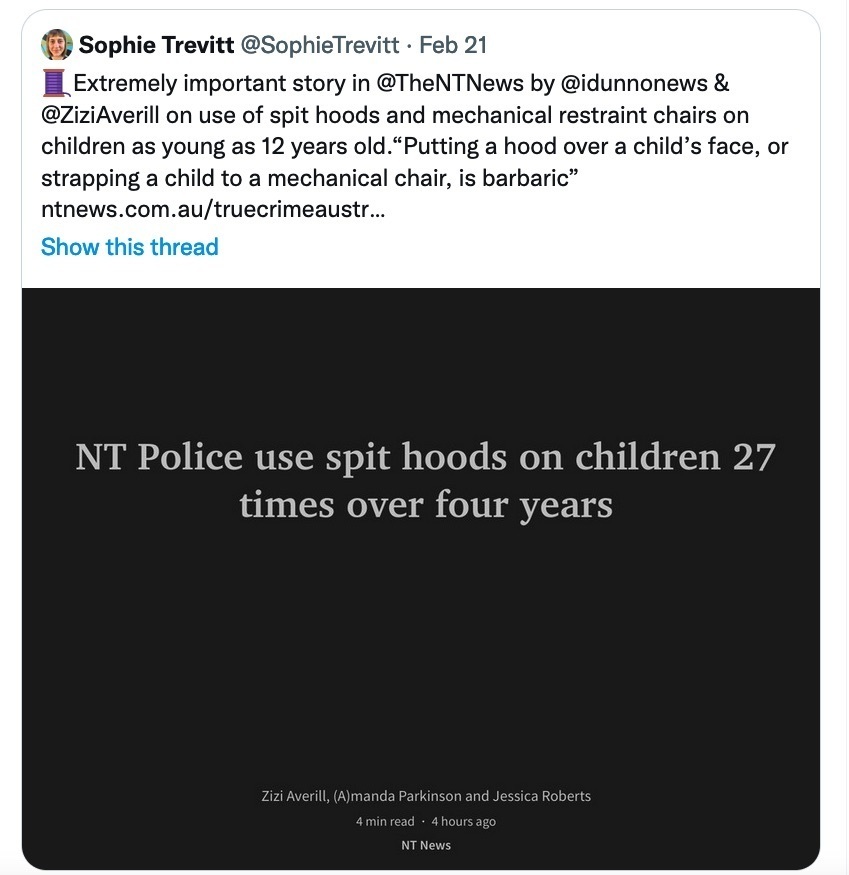 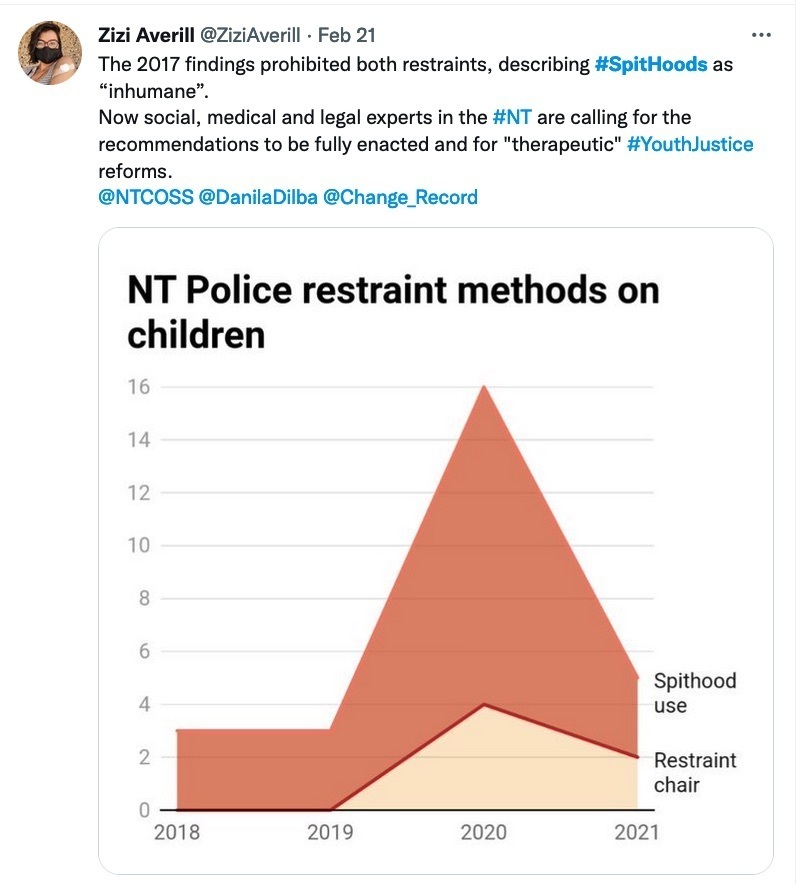 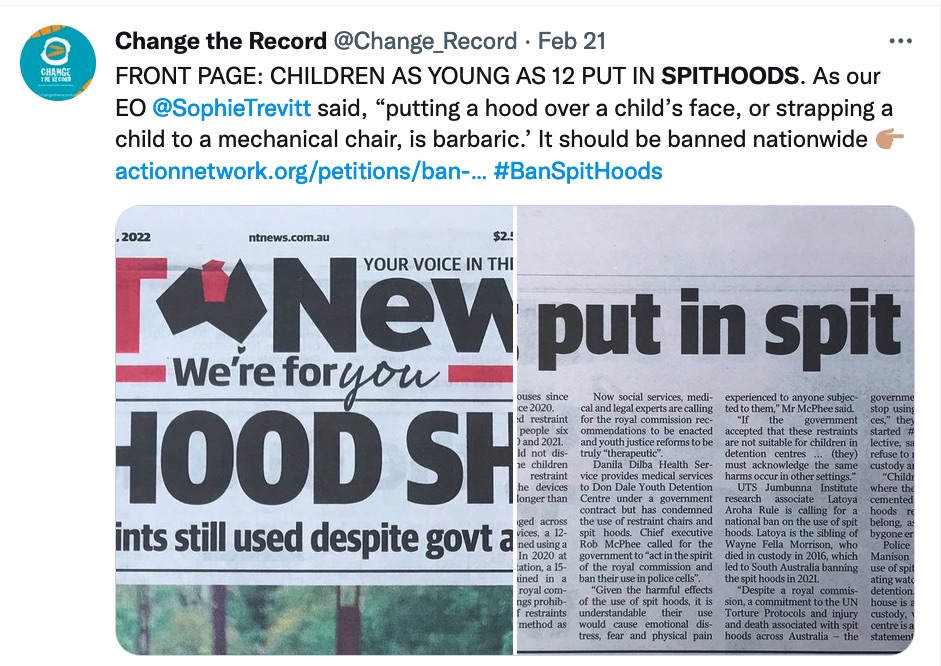 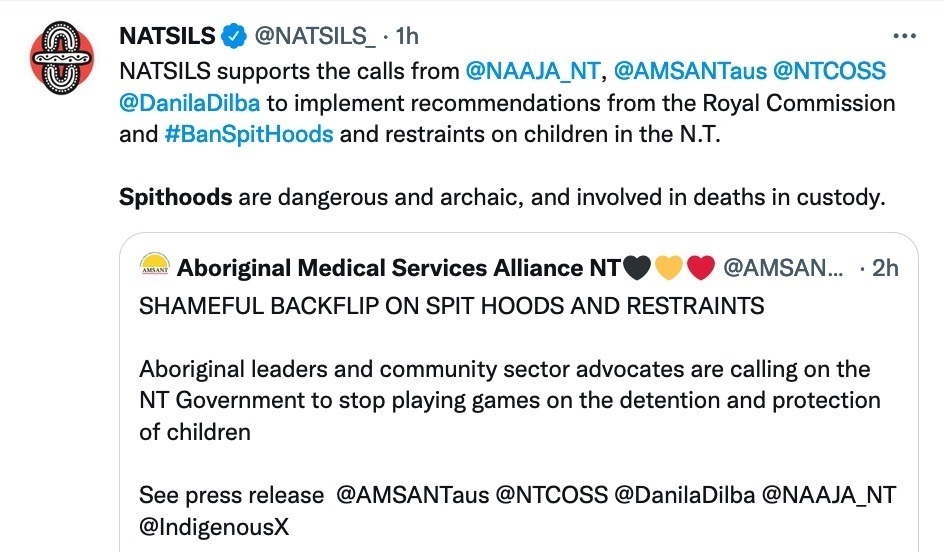